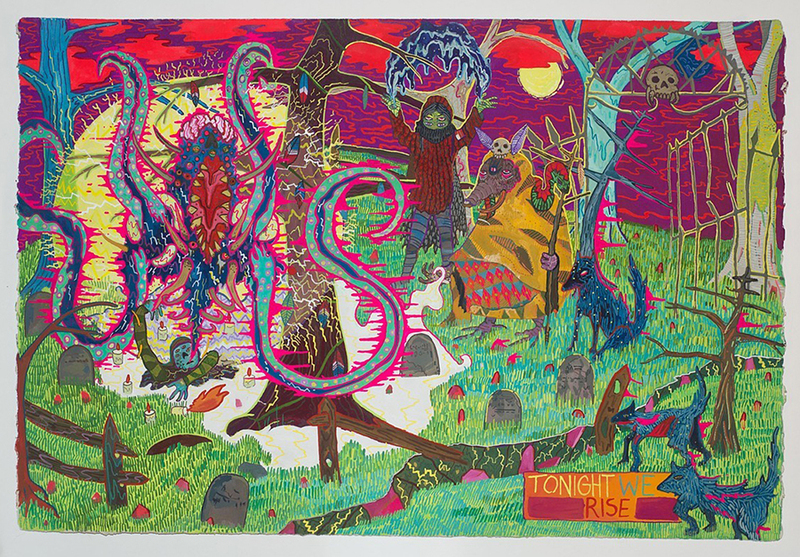 BONNER SALE'S colorful and chaotic gouache paintings take place on the imaginary Cannabra Island. His cast of characters includes monsters like mummies, gigantic spiders, sea creatures and living skeletons, as well as magical cats, snakes and owls. Cannabra Island is a constant, swirling mess of battle scenes, danger and transformation, punctuated by occasional moments of somber stillness, usually spent honoring the fallen. Bonner has been featured on the curated, non-​​profit web jour­nal thestudiovisit.com (2010). He was Mr. August, 2014 for Centerfold Artist on tropmag.com and had work in the accompanying group exhibition Centerfold Artist at Project 4 in Washington D.C. He recently exhibited at (e)merge, a DC-based art fair with Transformer Gallery. His work is included in the permanent collection at the Katzen Art Museum at American University. Bonner lives and works in Wheaton, Maryland.

OtherPeoplesPixels: Some drawings instantly made me think of the cantina scene in Return of the Jedi. (I think I even saw Boba Fett, or someone like him, a few times.) Tell us about the inhabitants of the world in your drawings.

Bonner Sale: The Troubled Magic geographic island is a magical catharsis leprosy colony, where monsters are sent to learn particular lessons from their pasts. The stories are not limited to monsters though. There are three general types of characters: animals, monsters and heralds. Animals are mostly cats, owls and snakes. I have a fascination with cats and owls. I find them to be majestic creatures. My own cat is a big part of my life, so she is used as inspiration: adorable but ferocious, capable of magic and wisdom.

In the painting You have been bleeding every step of the way, the cats are battling the tyrannical Eypecolypse and his summoned fire snake. They have him surrounded him, and the human companions are all trapped in conjured, crystal prisons. Eyepocolypse a humanoid laden in eyeballs. His specific transformation-punishment is for him to see his errors. He is the most celebrated and explored of the monsters. I feel a kinship to his woe and enjoy telling and painting his story. Brutalized and cast out of his world for selling secrets, transformed and disfigured, he found himself on this Cannabra Island. He is constantly learning from his errors and, I hope, will find peace and maybe one day return to his home planet in his original form.

The heralds, ferrymen of the neither world, have always been depicted as lithe women. Almost like angels, they often spell out the morals of the story or are seen feeding and visiting the various prisoners on Cannabra Island. In the painting I am not sure if you are ready to return with so many lessons unlearned, the cloaked sentient holds the skull and spine, explaining to the dead that it is not ready to return, not ready for the sacrifice of change and transformation. 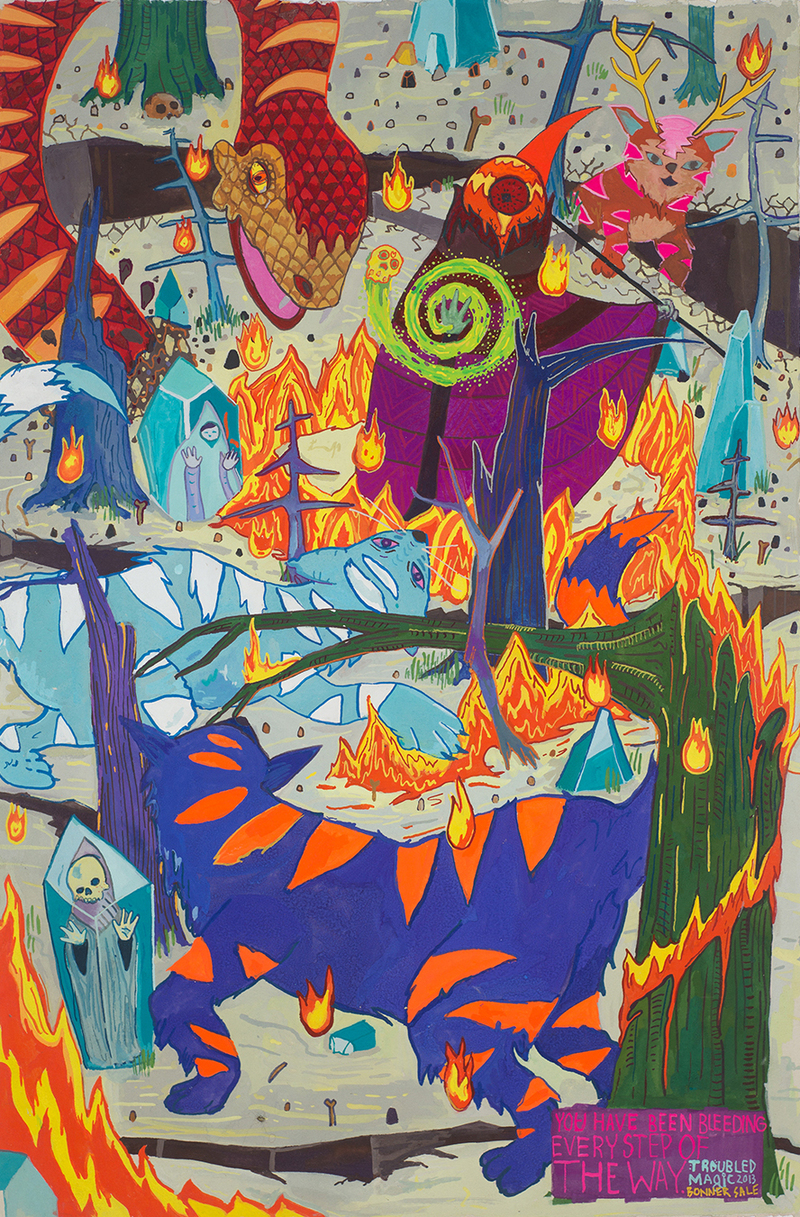 OPP: What visual artists inspire you?

BS: David Altmajd’s elaborate sculptures are just such a complex way of world-building. His unyielding use of materials is so brave and poetic. Continuing to tell the story of life and death and to find beauty in decay, I look at his work and aspire to create paintings as complex and defined as his sculptural work. Alan Brown is a painter that I love, love, love: his great, calm use of paint, wonderful concepts and a mature but expanding universe of characters and landscapes. Lastly, Brecht Vanderbroucke’s juxtaposition of live and online imagery is just dumbfounding and inspiring. Also his use of colors is bold yet organized. His playful depiction of the human very interesting.

OPP: You are a drawer through and through. Have you ever dabbled in other media?

BS: Yes, I love the process of drawing. Its very rewarding and automatic. It’s a method that doesn’t require physical objects or much space to perform. It seems so rudimentary, but there is still so much to explore. I have a lot of respect and devotion for drawing that has come before. My process is a little more rough and undisciplined than I want the outcome to represent, but the spontaneity and exploration into my imagination makes my paintings closer to an actual reflection of my soul rather than a formal, narrative painting. I usually work in sets of four to six paintings at a time, each painting made in response to the last.

When I dabble in other kinds of art-making, it’s more project driven, usually involving new media. I work with Brooklyn-based musician Adrian Varallyay, making video collage for some of his music. We mostly work with film stills from old exploitation films from the 1970s and 80s. Varallyay and I grew up together watching a lot of old movies and listening to records; this is just one of the facets of our combined creativity.

Zac Willis, Sam Scharf and I created a ceremonial event for Megatron, the leader of the Decepticons, who died in the third installment of Michael Bays’ Transformers. It included a video tribute to Megatron’s most important moments throughout Transformers history, several paintings depicting significant moments in his life and a handmade, wooden tomb for Megatron himself. The exhibition Megatron’s Dead also included an action figure graveyard, celebrating various fallen characters from film, TV cartoons and comic books. We buried over 80 action figures in little, toe-pincher coffins with little tombstones honoring each of the fallen characters. There was a companion book that identified each of the characters. It included pictures and small biographies that I had a great time writing. 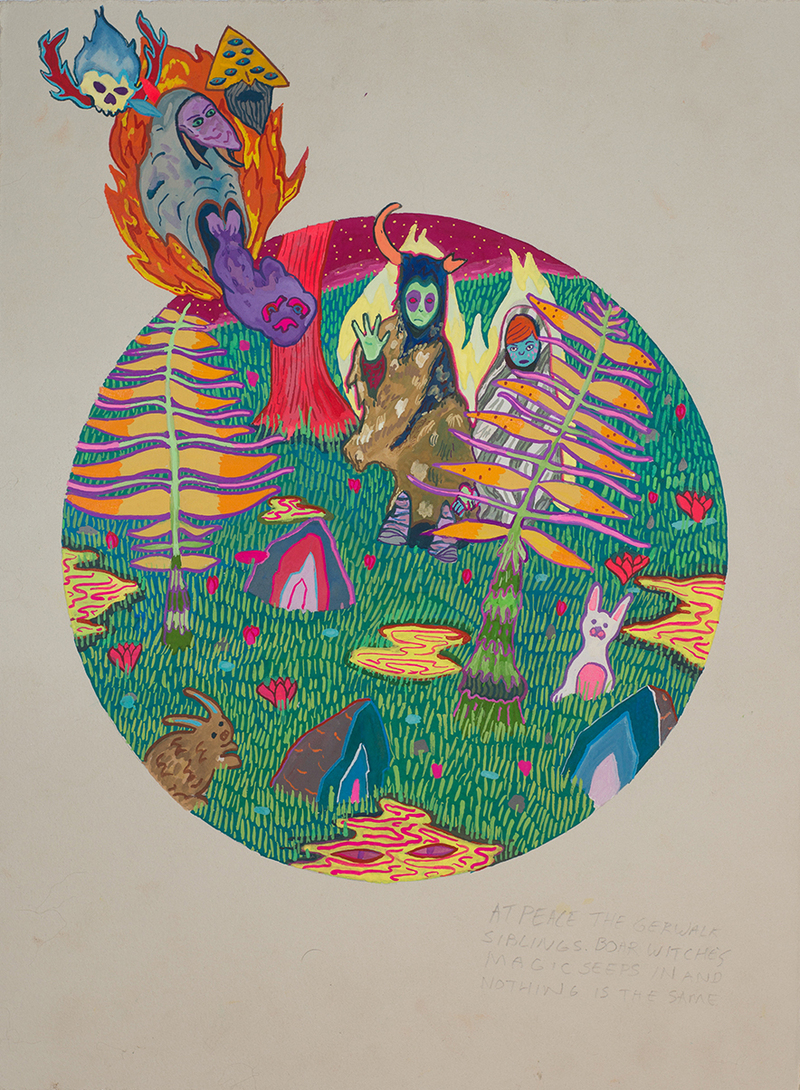 BS: I work in gauche and pencil. I mostly map out about four or five drawings at a time in pencil and then work them in with gouache paint. I like working with gouache, but sometimes I wish it was ink and acrylic or something more manageable. Since gouache is re-workable you cannot layer it without wetting the previous color, a lot of my painting time is spent making sure I do not paint over lines. Despite its drawbacks, I love the historic value of gouache, and the way it flows from the brush. There is a lot more for me to explore with the material, and working in gouache is kinda like being in a club with other gouache artists.

OPP: The Troubled Magic Circular Works reference Tondos but aren't traditional, in that they often break out of the circle. How are these drawings different from the Troubled Magic (Deluxe) drawings?

BS: Well, a wiser man than me once said, keep one foot grounded in the past while the other is headed for the future. At the beginning of this series,  I was drawing on large sheets of paper. There were isolated moments of character interaction with minimal background imagery. I wanted to start putting more detail and description into the narrative moments that I was creating. The circle was merely a tool to stop the painting at a point. In the newest deluxe drawings, the painting continues to the end of the paper. Each one still focuses on one event, but filling the page allows me to include more characters and elements for a larger narrative. The spirit and morals are the same but these take more time to finish. 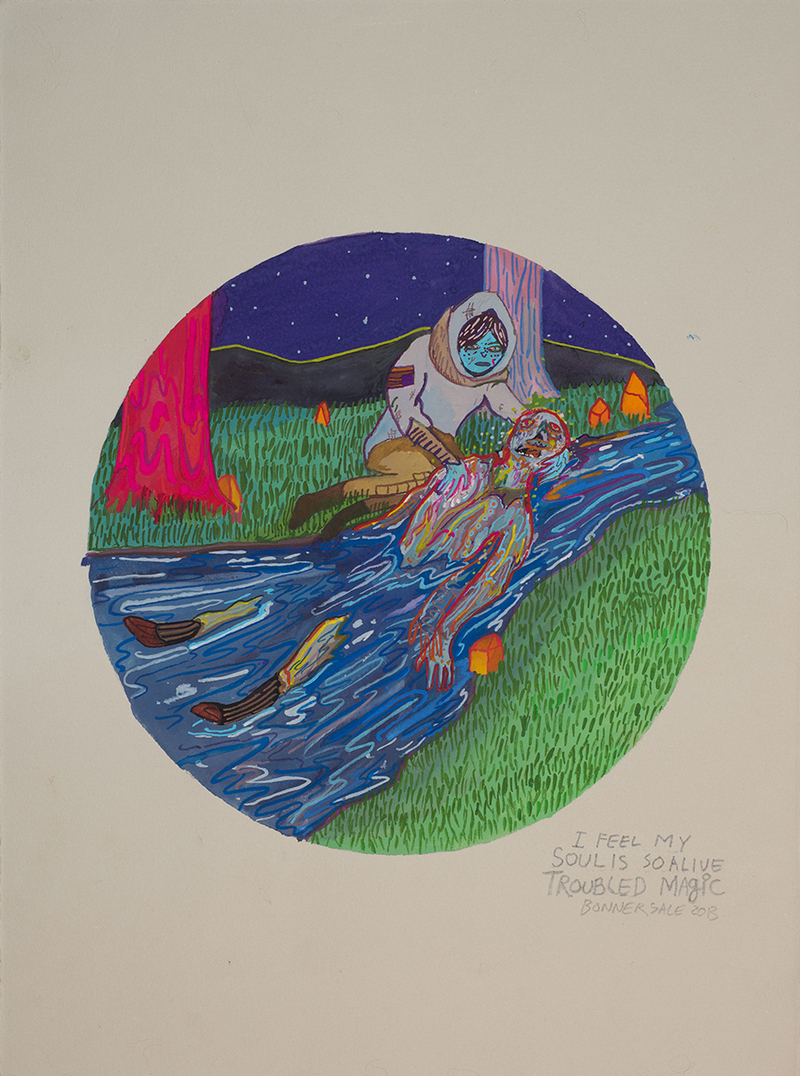 OPP: Could you talk about the text written on many of the circular works? These short phrases often have the ring of prayers or eulogies. Some sound like lines of poetry and the lyrics to heavy metal songs.

BS: Much of the text emerges during the process of making work. The title is always a emotional insight or response to the narrative. It’s meant to clue the viewer into the work but not explain or depict the narrative. I listen to a lot of Smashing Pumpkins, so I am sure there are some direct correlations to the lyrical content to Billy Corgan’s writing. The painting My soul is so alive is totally in tribute to the song God and Country from the Zeitgeist album.

OPP: In an interview with TheStudioVisit.com, you said that don't want to give away the narratives in your drawings, that you want viewers to bring their own histories to the work and find their narratives. But, will you pick just one drawing and reveal the narrative you see?

BS: My wait is over but I am never satisfied captures a mutation going further than desired. In my world, magic always has setbacks, ultimately describing that there are consequences to all unnatural changes. The orange crystal represents the element of change, the outside setting makes it a public event and the victim was unprepared for the changes. 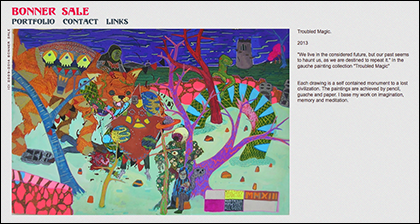