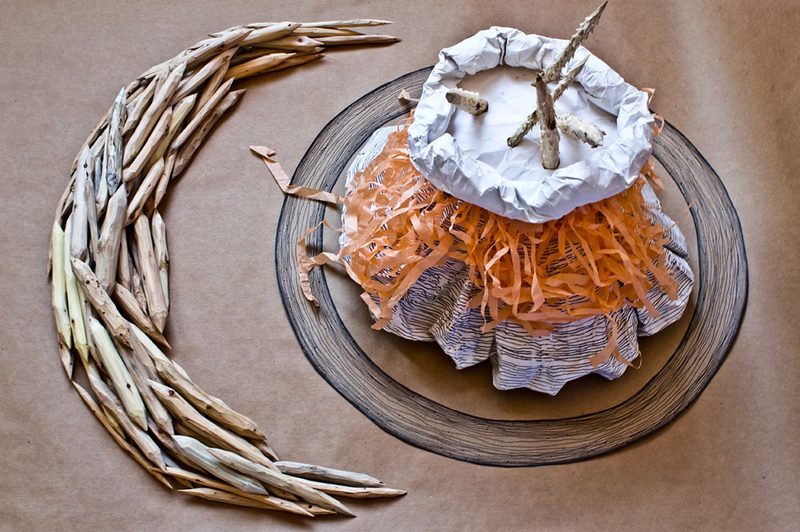 Drawing, whittling and shredding paper are all forms of mark-making in BENJAMIN LYON's time-intensive art practice. He seamlessly unites both natural and manufactured materials in mysterious altars and monuments, revealing reverence and curiosity about time, chance and the nuanced experience of change that only occurs through ritualistic, haptic repetition. Benjamin earned a BA in Environmental Sustainability and Social Justice with a minor in Fine Arts from San Francisco State University. He continued his artistic development at City College of San Francisco, and is in the process of applying to graduate school. Benjamin lives in Brooklyn.

OtherPeoplesPixels: Could you talk about the presence of repetition in your practice and in the resulting work? I see it in the india ink drawings, the paper-shredding and the whittled pine branches, which are all forms of mark-making or marking time.

Benjamin Lyon: Repetition drives my practice because it brings me into the moment of making. Usually it gets me started and keeps me going. The work often begins without a plan. I think it grows out of a faith in the power of chance; I let go of control and rely more on the experience of making to guide me instead of its outcome.

My work is an intimate conversation with time. Time is fascinating to me because it's both abstract concept and a real experience. It's hard to define in an concrete way. There are so many different interpretations of it depending on what, who and when you are.

All of my work is handmade, and often I choose the repetitive act because it helps me become comfortable with anxiety and boredom. It's therapeutic for me. I dedicate a lot of my studio time to making marks, whittling sticks, shredding or braiding paper. Ultimately, the marks and objects function as witnesses that tell a story of change, and that story is written in nuance. 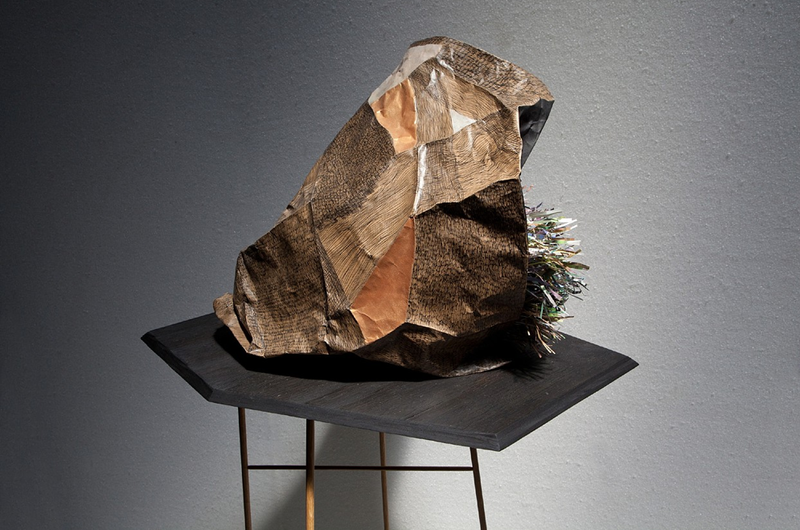 OPP: You repeatedly use brown kraft paper, wax paper, newspaper, construction paper in your works. What draws you these particular types of paper? Could you talk about using a two-dimensional material as a sculptural material?

BL: I've chosen these items because they're accessible, inexpensive and often taken for granted. The challenge for me is to take an object or material that is not precious and to inject meaning into it and express something important. And since my work often appears whimsical or other-worldly, I anchor it in reality with the familiar papers we find in our houses or on the newsstands.

Paper is a magical material. When I was a kid, art was always two-dimensional. My dad was an architect/engineer, and all of his work was prepared with different types of paper. I trained as a draftsperson with him for a handful of years and learned his quirky and efficient methods of constructing working drawings. These sheets contained layers upon layers of ink drawings on tracing paper. They were glued, taped, whited-out, xeroxed. They contained pasted notes and hand-drawn details that were repeatedly removed and replaced with the old torn edges of other sheets of paper. Each stage of the process remained subtly visible on the original, but would disappear once the paper was xeroxed on a copier set to a low sensitivity. The sheets were neatly organized but wilted by the end of the process. They had a lot of character. If you looked closely, you could see that they documented all of the changes over time.

Paper was such a large part of my development as an artist, that it seemed only natural to use this traditionally two-dimensional material, historically used for documentation, to create three-dimensional sculptures that document change over time. 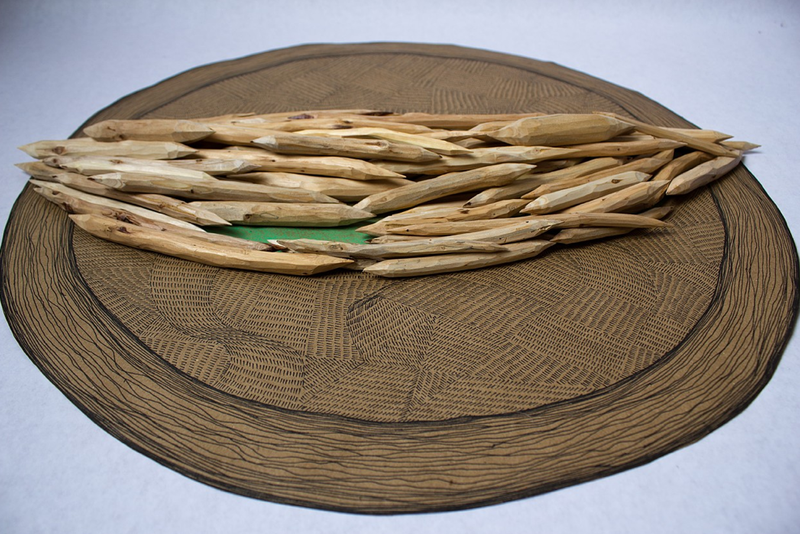 OPP: Paper is just wood in a manufactured form, and the presence of shredded paper makes me think of the absence of wood shavings that must have been produced when the fallen pine branches were whittled down. Was it the process or the material that drew you to wood-carving and whittling?

BL: I'm glad that the pieces produced such imagery for you. Through the visible marks of the tools, I'm trying to evoke the presence of work and its energy. In those pieces you're seeing manufactured forms as well as my own marks. Present are the many stages of transforming a specific material by machine or by hand. All of this is possible only with work. Tom Sachs is an artist that I admire. In an interview with Gaia Repossi, he says: “I'm trying to communicate transparency. I'm looking to show the scars of labor and the evidence of construction.” I relate to his sentiment. There is something truly satisfying about the act of creating. From cooking tasty food to building a sturdy book shelf, if a thing is made well and the process is satisfying, it makes all the difference for the maker and user.

I can’t say that it is either the process or material that draws me to these practices because it’s almost always both. I use a material in a way that illuminates the actual work done over time, but I also often choose acts that the viewer won't ever see in the final product. For example, I frequently go on walking adventures through the city and its parks in search of a material to gather. Or, in the new drawings that I'm developing, I've made a gazillion little, repetitive and beloved marks that I call “ink scratches.” I'm not using pens with ink cartridges but instead dipping a pen with metal nib into an ink well after every few marks. It's a little bit ridiculous. . . but enjoyable. It slows everything down for me.

For each piece, I chose materials that represent both nature and culture. I mix the two symbolic artifacts to address a perceived dichotomy. Time-intensive work allows the two symbols become more similar than they are different. 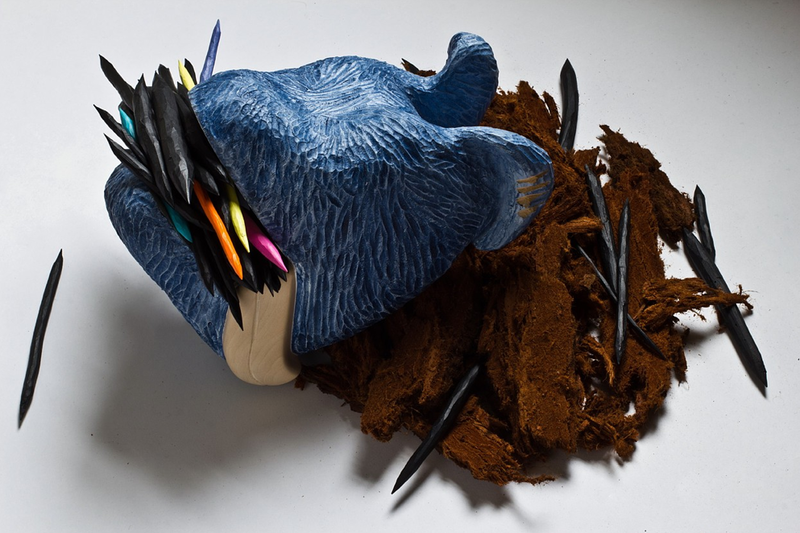 OPP: Many of your pieces, including Fortune Teller (2012), Befriending 5,000 Splinters (2012), and Dendroclimatological Meditation (2012), evoke altars for me. Others, like Tangle Ish (2013) and Wishing Well (2013), are like monuments, sites of human longing or reverence. Does this reading echo your intentions? If so, what are these sculptural altars and monuments for?

BL: Observing the work through someone else's eyes can be really valuable for seeing new things! After considering what you've said about the 2012 pieces appearing as altars and those from 2013 resembling monuments, I think that the two different years mark different stages in a process of conjuring the energies of both natural and cultural elements. The altars from 2012 were made with the intention of awakening the ideas. I wanted viewers to feel as though they had stumbled upon a ceremony in an unknown world. I created my own rituals that could induce magic, bringing me closer to understanding nature, culture and time. The imagined ceremony itself was distant from the site that remained. It felt distant for me, too, because it was new.

Perhaps the altars did work as I intended, awakening the energies to produce the monuments in 2013. Reverence is a great word that I also use to describe those pieces. I have a deep respect for the world around me with all of its experiences and interactions. The respect that I try to maintain adds mystery to everyday situations. Life is rich with possibility when you allow the unknown to exist instead of desiring full control. 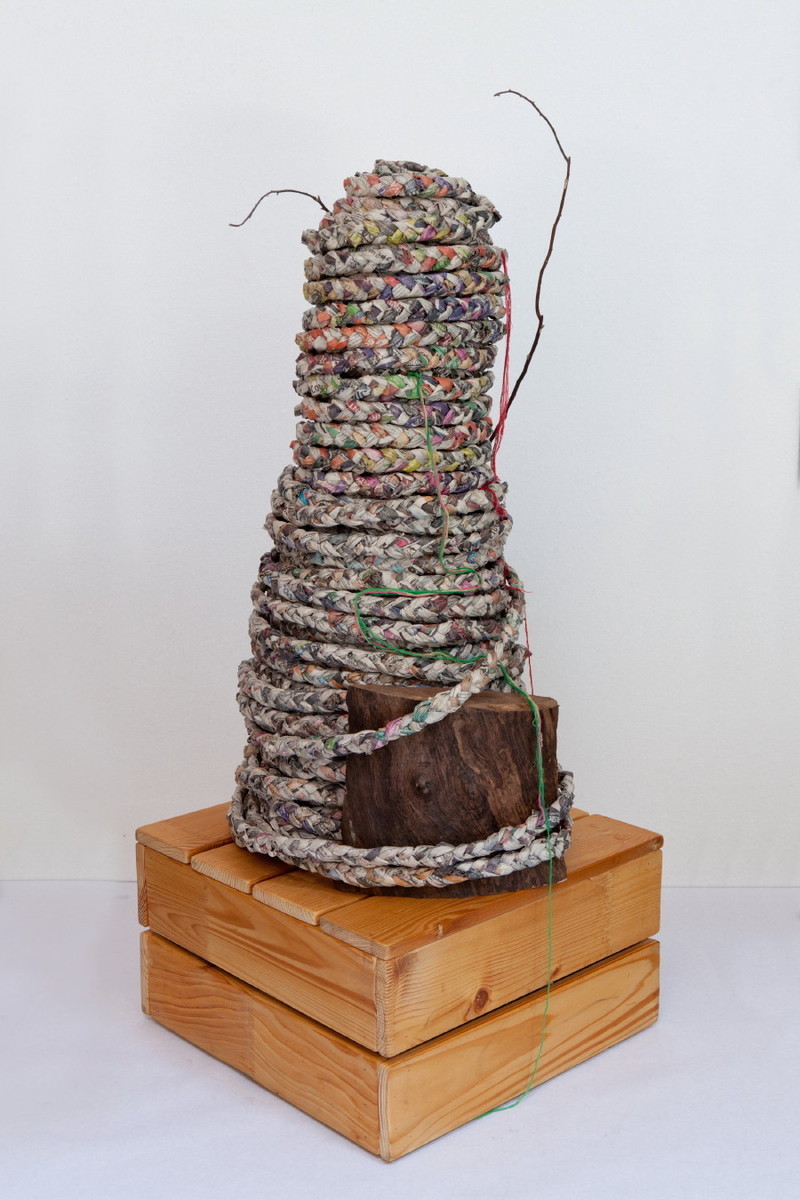 OPP: How does your experience as a teenaged graffiti artist in San Francisco relate to your current work in sculpture and drawing? What did you learn in that time that affects the work you currently make?

BL: Graffiti was a rush of excitement. It was a tight community that admired and hated each other at the same time. We shared secrets, tricks of the trade and lived and worked by a code that's hard for everyone to understand. But the code is heavy and present. It's an interesting subculture that I still have a lot of respect for. I think that writing graffiti did not so much transfer into a visual style for me, rather it developed my interest in the process of creating.

I started writing graffiti when I was in middle school. I still have old drawings of my first pieces on paper dating back to '91. The pieces are so funny with their letters filled in with brick patterns and their star-dotted letter "i"s! We'd go out walking in the streets searching for new spots to plan our pieces before heading to the wall, or we'd explore the streets while bombing, which is what we called tagging. But what's most memorable to me is the practice I put into perfecting my moniker. I must have filled hundreds—I mean hundreds!—of spiral notebooks with my name. I'd write my tag over and over and over, slightly varying the styles or the spelling in search of that perfect combination. This is where I developed my fascination with repetition, the nuance of change over time and the never-ending exploration of my surroundings. 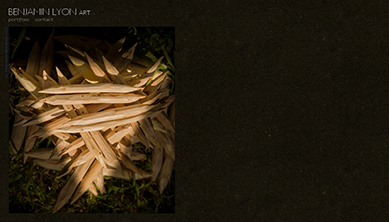