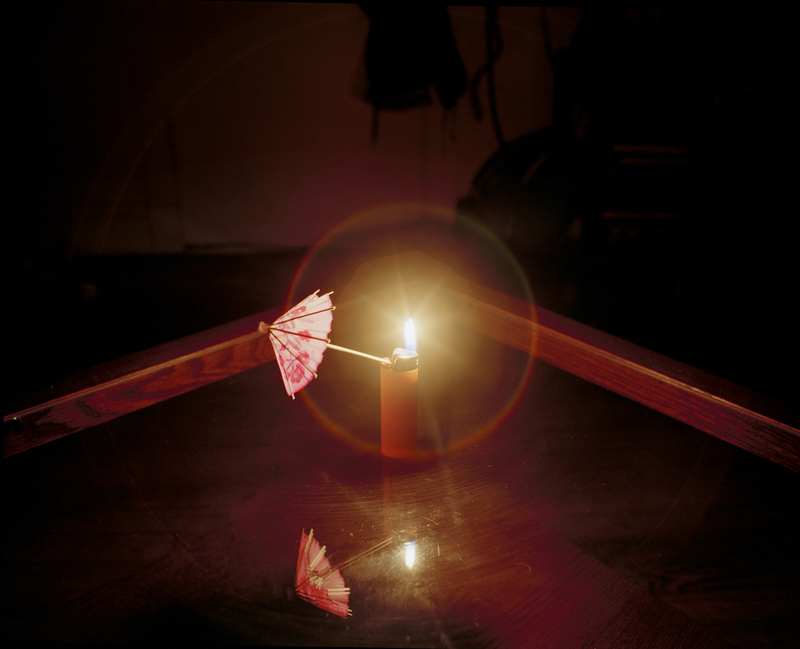 OtherPeoplesPixels: Many of your incredible range of photographs from the past five years have everything to do with presence and absence—and perhaps more accurately with the presence within absence. What inspires your investigations surrounding these ideas?

Adam Ekberg: This working methodology comes, pretty specifically, out of my failure to represent ideas with “straight photography.” Prior to graduate school I was a caretaker at a six-bed facility for people living with HIV and AIDS. I was really interested in the disparity between the systems surrounding death and the organic death. I was with people when they died and in awe of how amazing and unique each patient was. Comparatively, after these patients died, they got pushed through this final bureaucracy. As a direct result, I made formal pictures of funeral homes that, while formally beautiful, represented a way of making that fundamentally did not work for me.

These failed pictures led me to turn my way of making photographs inside out so that instead of concentrating on systems that the individual occupies, I make unique actions in empty spaces–apartments and landscapes. This transition from the universal to the personal helped to define what I do now. I have realized that the simple things done to amuse myself are worth capturing with my camera. I remember an amazing afternoon in the late 1990’s when several friends and I raced an empty Kool Whip container against an orange Tupperware container down a New Mexico stream. We came increasingly invested in the outcome of these races and watching the colorful containers race through the desert was absolutely hilarious and beautiful.

These days, I think more and more that a good photograph is the result of a memory coming out sideways. My best example is my first memory: watching the barn next to my childhood home burn down after being set on fire by an arsonist. I recall being held by neighbors while my father sprayed down our house with a garden hose to prevent it from burning. I was wearing spaceship pajamas and holding a glow-stick that a neighbor of my parents had given me. At its peak, people could feel the heat and see the fire from miles away. Holding that small glow-stick while watching the giant flames take over the barn and rise into the sky was a pretty good introduction to one person’s smallness within the universe. 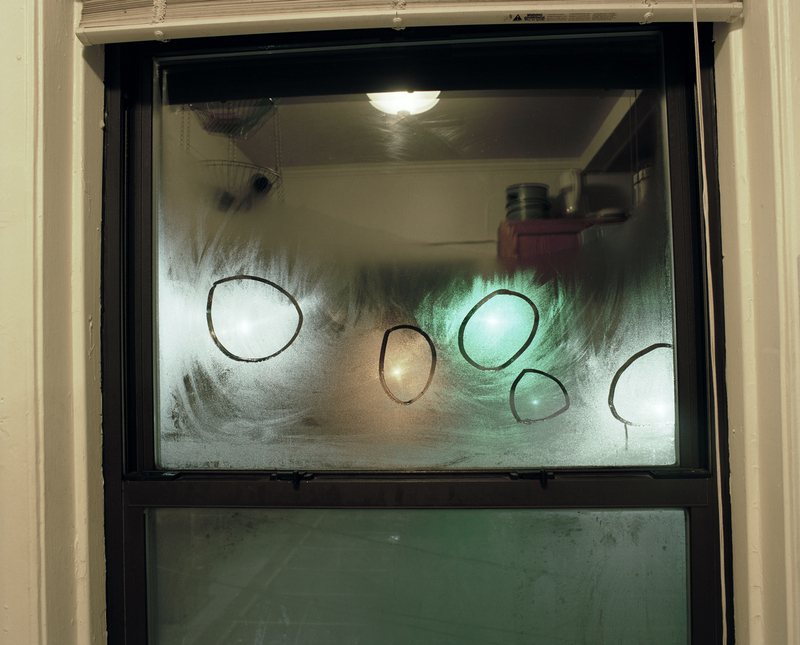 From the inside looking out
2010

OPP: I love From the inside looking out—your photograph of ovals drawn into the steam on a windowpane. The ovals outline light sources as seen (as the title implies) from the inside looking out, but there is something intimate about your ovals beyond their obvious hand-drawn quality. I know you create all of the constructions that appear in your photographs to exist in the world (as opposed to digitally manipulating them). I’m curious if you create each with someone in particular in mind? There is something romantic about many.

AE: That picture was made while boiling water for pasta on a winter night in Chicago. A friend was over for dinner and drew circles on the condensation in the window. If you looked through one eye from this specific place in my kitchen, the circles lined up with the lights in the parking lot. I thought that was really wonderful because it made me think about the space in between yourself and the world around you, as if the windows functioned as eyes. I attempted to take a picture of it but my camera’s lens kept fogging up so I recreated the situation on the following evening. Looking back on it, I am struck by how wonderful it is, not just as an image but also as a gesture.

OPP: Can you speak about how lighting and illumination play into your body of work as a whole?

AE: Even though it is obviously one of the elements of any photograph, I don’t think about lighting that much on a conscious level. When I use light as an overt ingredient—such as refracting a shaft of light with the camera lens or capturing the physicality of light in a smoked out room—I am interested first and foremost in making its presence known. I think a good metaphor would be having a neighbor over for dinner that you have lived next-door to for years, but never spoken to. 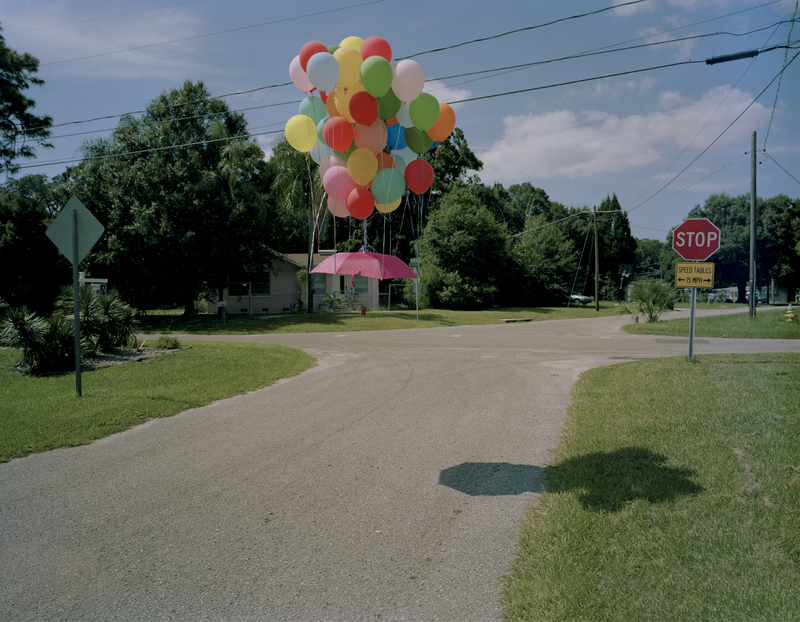 Untitled (levitating pink umbrella)
2010 OPP: You’ve written about repositioning celebratory iconography to create minor spectacles: balloons, cocktail umbrellas, disco balls, soap bubbles, and lens-based refractions. The result is always magical and usually surprisingly so. Over time, has it become more difficult for you to maintain a sense of magic in what you do?

AE: In many ways, I am the luckiest artist in the world, because my work investigates the commonplace. There seems to be no end to human beings’ ability to generate the mundane. I marvel at these moments of toenail cutting, tax doing, shoelace tying, and paperwork filing. It is of course a completely different exercise in taking these things and making art from them.

I feel best about my practice when I am simultaneously creating pictures that seem like what I am known for doing and starting to make images that deviate from that. I recently made a picture of a shadow falling on a wall. There is a knothole in the wall and a human eye exists in the place of where the shadow’s eye would be (if shadows had eyes). So the resulting photograph is a kind of visual pun. This image is both grounded in what I have done and provides fertile ground in which to grow. 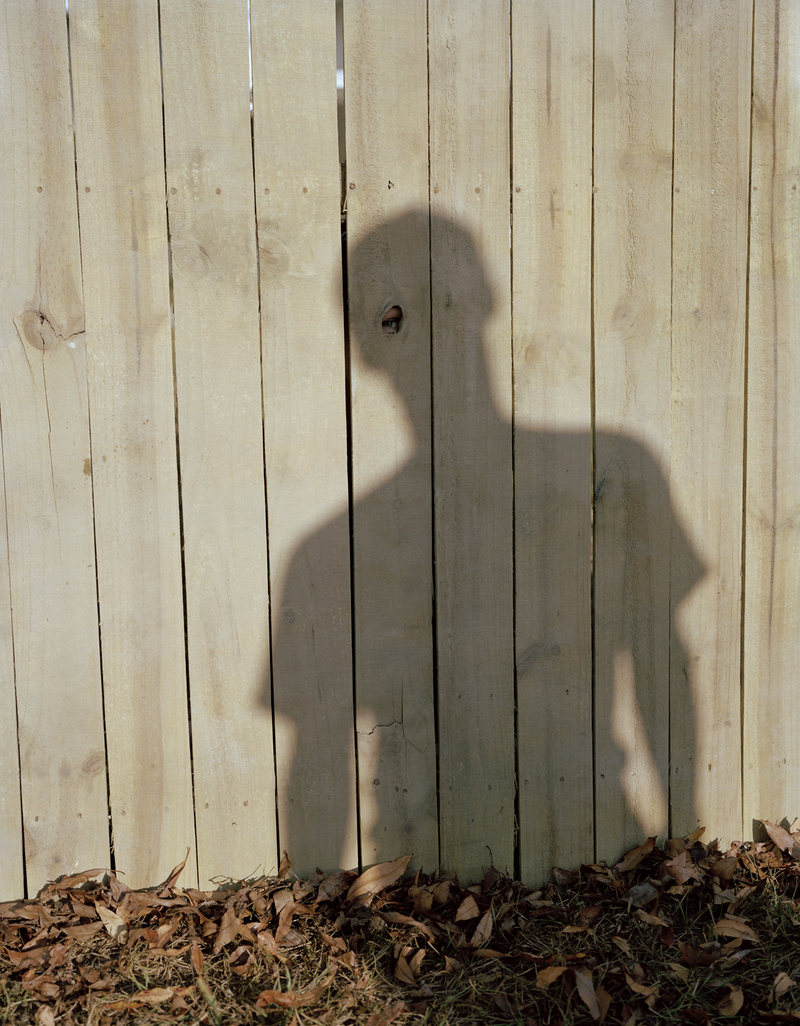 OPP: What does a day in the studio look like for you? Do you “sketch” with your camera or does your process perhaps include writing, drawing, or pursuing the materials you ultimately photograph?

AE: I have a notebook and I make a lot of sketches of my ideas. I should “sketch” with my camera a lot more than I do, but I mostly make drawings. I like to sit and let my mind wander. I like to ride my bike because it gives my body something to do to keep it busy—my conscious mind pays attention to not running into trees but my unconscious is allowed to drift. Since a lot of my photographs come out of experiences—or an effort to reconstruct an experience or a memory or perhaps to mythologize a previous experience—I tinker a lot while I am thinking about things.

The photograph Cocktail umbrella and Bic lighter is a good example of that. I was sitting in my apartment waiting for someone. Bored, I wedged a cocktail umbrella in the lighter making the gas stay on. When I later restaged that moment to photograph the lighter on my coffee table, the light from the flame was refracted by the lens making a warm circle of light in the picture. I love this picture because its origin is firmly grounded in playing with commonplace objects, but at the same time the result is this mundane sculpture with a halo around it that is reminiscent of painted depictions of Christ and Saints.

OPP: You are an Assistant Professor of Photography and Digital Media, School of Art and Art History at University of South Florida, Tampa, FL. How does teaching influence your art practice?

AE: I love teaching and am really lucky to have joined an amazing faculty at University of South Florida. I teach two classes and work with five graduate students each semester. A day of doing studio visits is my favorite—when I get to walk into grad studios and spend an hour talking to people about their work. Being surrounded by people who are working through ideas and constantly improving their ability to articulate these ideas is truly inspiring and motivating for me to do the same.

OPP: What is next for you? Tell me about your upcoming solo show at Thomas Robertello Gallery.

AE: Having just had solo-exhibitions at Platform Gallery in Seattle and Fotografiska in Stockholm last spring, I am now preparing for an exhibition at Thomas Robertello Gallery this October. I have a good part of the late summer free to make images and am looking forward to driving to New England to do so. Several friends of mine live on large, beautiful pieces of land in the Northeast Kingdom in Vermont, so they give me pseudo-residencies. My notebook is full of sketches for photographs I want to create. I can’t wait to wake up in the woods where the only thing on my ‘to do list' is to make pictures. 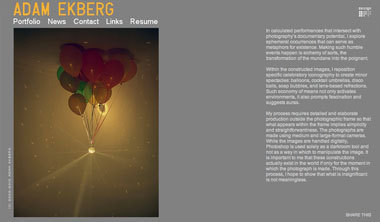