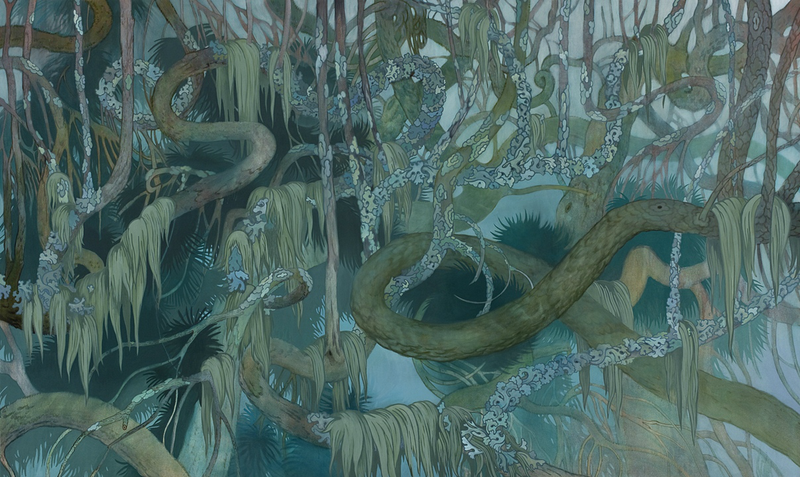 RICK LEONG paints dense, psychologically-charged landscapes influenced by both the traditions of Chinese, Japanese and Canadian landscape painting. He explores our human experience of the landscape, often using the metaphor of twilight to reveal the intangible border between the internal and external, the subjective and the objective. He is currently an artist-in-residence at the Nova Scotia College of Art and Design, where he will have an exhibition opening at the Anna Leonowens Gallery on November 13, 2012. Rick lives in Victoria, British Columbia.

OtherPeoplesPixels: What is the origin of your interest in landscape?

Rick Leong: When I was an undergraduate, I was working with themes of political identity and what it means to be a Chinese-Canadian. I worked with imagery derived from Chinatown kitsch, manga and anime, basically developing a warped sense of Asian history and culture through visual language. There are a lot of senior artists working within those themes of identity and displacement, particularly in Vancouver, where I am from. I felt that I was essentially walking in their footsteps and really wanted to forge my own path. By the time I was headed to graduate school, I felt that the work that resonated with me the most were classical Chinese and Japanese paintings and prints. I didn't simply want to emulate those artists and their works so much as I wanted to join in this beautiful conversation they were having about the landscape and our relationship to it. I wanted to try to recreate the feelings they inspired in me rather than recreate their techniques or methodologies. I think this became a fundamental influence on how my practice would develop over the next several years.

OPP: Is there a specific artist or piece from either of those landscape traditions, or from Vancouver that is particularly influential for you?

RL: The paintings of Kano Motonobu have had a tremendous influence on me, particularly his painting Birds and Flowers in Four Seasons. He is known for creating wa-kan, a technique that combines classical Chinese and Japanese styles. 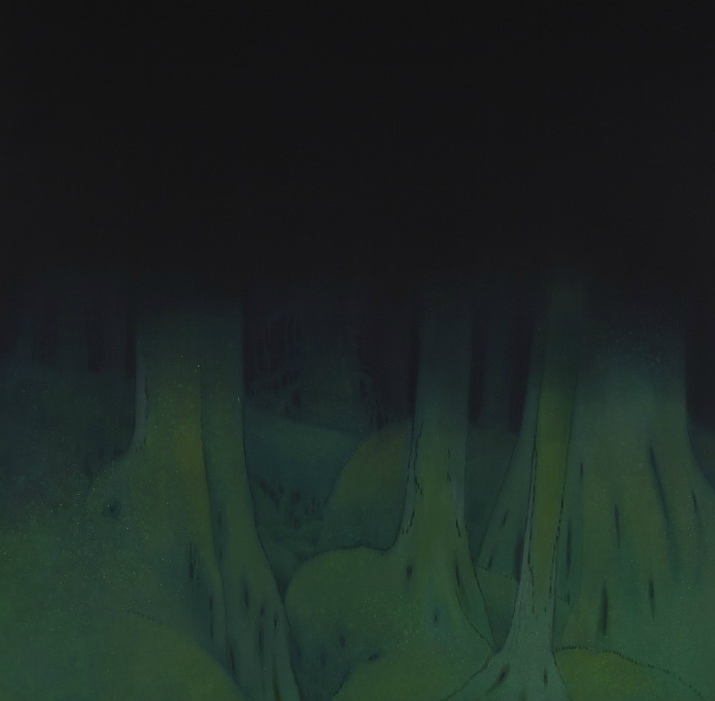 OPP: In the spirit of full disclosure, I'm going to reveal a personal bias: I've never been partial to landscapes in general. I love being in nature, but what I love about it is my emotional experience of feeling connected to the world. Often straight landscapes don't do much for me, even when I can recognize their beauty, because they don't elicit my emotions. But I feel very different about your work. In paintings like Hush (2010), A Still Melody (2009) and Dancing Serpent in Dawn's Quiet (2006), the vines, branches and trees look like creatures. Plants are, of course, alive, but in your work, they appear to have personalities, to be animated emotionally. It's this quality that gets me really interested in investigating the paintings further. Are you intentionally imbuing nature with personality? If so, are your intentions in doing so different from my experience viewing the work?

RL: When I create a body of work for an exhibition, I typically try to recreate the experience of venturing into a particular kind of landscape. I start with the dawn. As the viewer moves through the exhibition, encountering the different elements of the landscape from different perspectives, it transforms into night. I often build my landscapes around animal forms or text, mainly as a compositional device but also as a way to imbue the work with a hidden layer that gives me the opportunity to develop a more profound viewing experience. The inspiration for Hush came from the experience of walking alone in the woods in the Rocky Mountains, and the silence was like a blanket. The only noises were my footsteps and my breathing, and I became lost in thought. The text written in the branches of the tree in Hush is "the sound of silence is the sound of self."

I work predominantly from memory in these works, and what I don't recall exactly I invent or imagine. In this way, I am not creating a document of a particular place but rather the experience of places that seem familiar in a tacit way. This process allows for the unexpected that arises in the creation of a work to exist and develop into something tangible. When laying down textures for grounds to build upon, I'll often pick up on forms that I see developing and flesh them out. This has led to an interest in the gestalt, or the process that helps us define or order the chaos around us. It is how we make sense of letters from typographic shapes, for example. In this way, I have started to think of the landscape as a visual language that I can use to talk about other things that may interest me. So the work is in part about the landscape and how we experience it and what we take away from it and carry around within us, but it is also a form of language and communication. The phenomena of the gestalt extends to the way that we anthropomorphize the landscape as well. When we walk by a tree and we see a face in it, it is part of this process. There is something fundamentally compelling about this process that persists throughout our history, such as in Taoism and Shintoism all the way to Disney. Part of my process in creating a work is to allow those elements that arise to take on a personality of their own. I like to think of this as allowing the painting to have some say in its own creation, to dialogue with the work as I am making it. 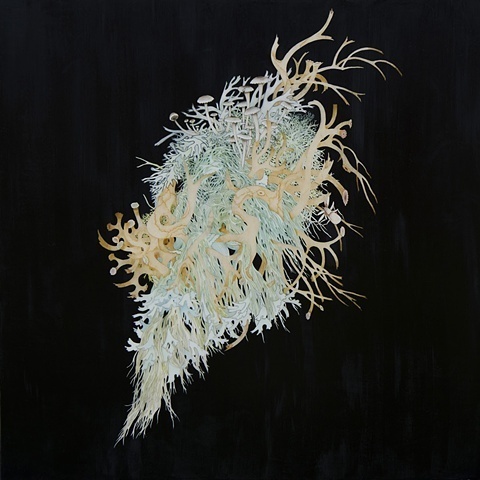 Oneiric Perception
2012
mixed media on panel
48' x 48'
OPP: One metaphoric theme I see in a lot of your work was highlighted in your exhibition at Art Gallery of Greater Victoria called The Phenomenology of Dusk (2012): thresholds, in-between-ness, hybridity. Could you talk a bit about this body of work and how metaphor plays out in your landscapes?

RL: As I was building these landscapes that always began with the dawn and ended in darkness, I became more aware that the paintings were focused on the day. I realized that this is only a part of the way that we experience the landscape. I began to break down the landscape into three distinct ways of experience—day, night and twilight. The Roaming Gloam was my first deliberate project that dealt with the in-between aspect of twilight. I approached the work as an experience of a place situated within time. Time as place. As I began to venture into the realm of phenomenology and ontology, I began to think of the in-between time of twilight as a metaphor for the threshold between the subjective interior realm and the objective external realm. I am interested in how each informs our experience of the other. It goes back to the gestalt in the way that we project aspects of ourselves onto the landscape when we see a face or form within the landscape and, alternatively, how we situate ourselves within constructs of space and place within our own thoughts and dreams. 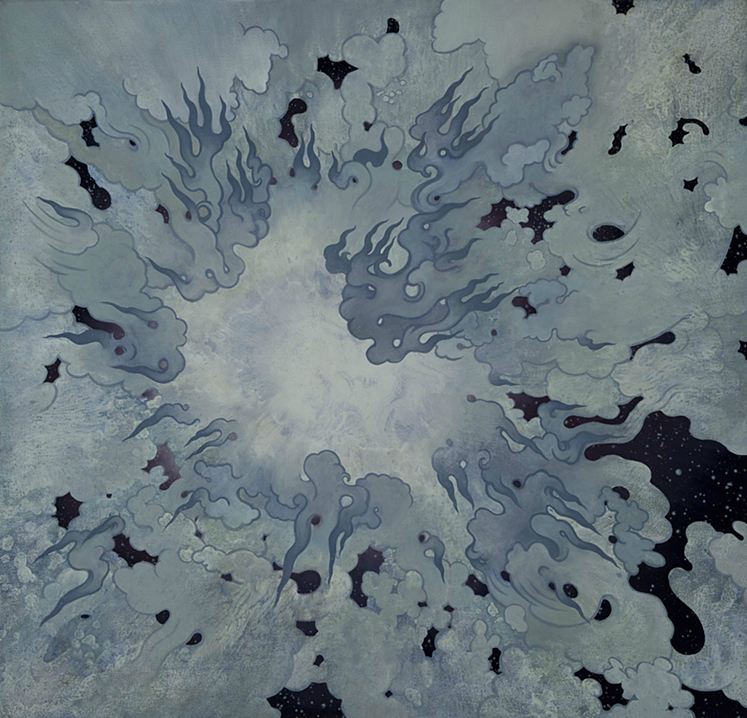 Supernova
2010
watercolour, ink, oil on canvas
46" x 48"
OPP: The Wilderness (2010) is a series of  "spacescapes depicting cosmic phenomena, constellations, and the mystery and romance of the unpredictable forces of nature and their impact on the human experience."  This body of work is formally so different from the rest of your work, which is usually so dense with vines and trees and details that pull the viewer in closer. This work is conceptually connected; it's the macro to the micro of The Phenomenology of Dusk (2012). In terms of your experience of the process of painting the work, not the content or final product, did you enjoy working on one of these bodies of work more that the other?

RL:The impetus for The Wilderness was the desire to create the experience of the landscape at night. When the woods, rivers and lakes become obscured by darkness, the eyes drift to that which is illuminated. I wanted to approach it in my typical way, to create this experience of a place as one moves through it, experiencing it from different perspectives. Again, there are the familiar aspects which manifest as shooting stars and constellations, yet we have to project more of our imaginations into the work as it is the great unknown wilderness of our time. The work was a challenge for me to create, as there is less critical mass to manipulate. I began working from the material itself, staining the linen with inks, pouring and pooling the watercolours, and finally fleshing out the forms with oils. In relation to The Phenomenology of Dusk the processes were at radically different ends of the spectrum between control and chaos. Both have their pros and cons, so I don't necessarily prefer one over the other so much as I strive for the ability to shift my methodology as the work demands. 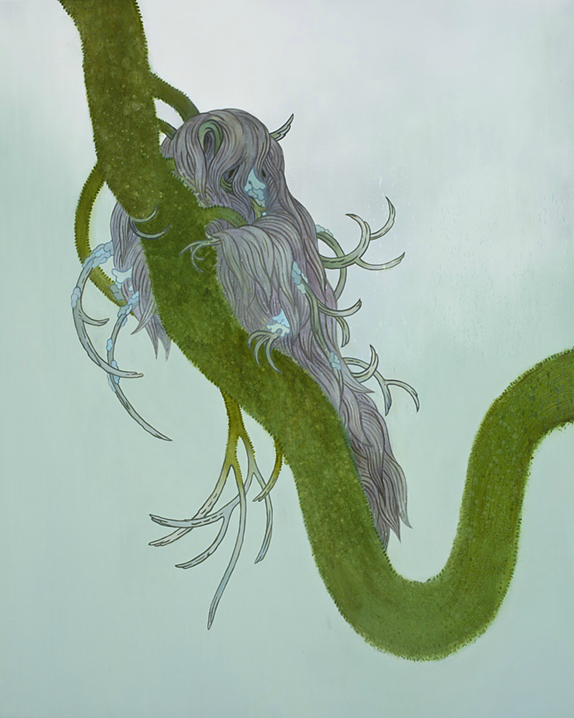 OPP: What new piece, idea or upcoming opportunity are you most excited about?

RL: I am currently the artist in residence at NSCAD, and I am working with lithographs and screenprinting for the first time, as well as making paintings. It is an exciting cross discipline experience for me, and I am learning a lot. The work I am doing here culminates in an exhibition at the Anna Leonowens Gallery, and will be part of a larger body of work that will be shown at Two Rivers Gallery in Prince George in January, 2013. 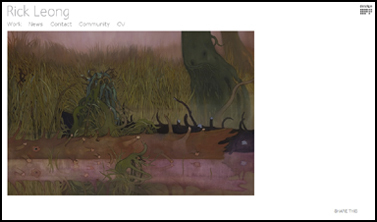