Portland-based artist Julia Barbee wants to know what you smell like. Or, at least what type of scent you would select based on your ecommerce proﬁle or a Craigslist ad that you post. Barbee wanders into that strange strip of creative space between ﬁne art and high fashion, adding touches of anonymous Internet moments along the way. In the portfolio section on her website, she lists her social media projects and ofﬂine, physical artworks, which often inform each other. She is interested in the temporal aspects of one’s identity, including experiences of the visual, the auditory and the ephemeral. Barbee received her MFA in 2011, graduating magna cum laude from California State University at Long Beach.

This is the fourth post in a five-part series about how artists use social media. Read the previous three posts about artists Jake Myers, Sabina Ott and Ellen Greene. Have ideas for a topic you’d really like covered on the OPP blog? Email us at blog [at] otherpeoplespixels.com.

Alicia Eler: One of the ﬁrst Web-only pieces on your site that I noticed was Oral,  in which you post images of your mouth missing teeth, post-bike accident, to social media sites. The inspiration is taken from something that happened to your physical body, but the project itself exists only online through images. Tell me about the project. Could it have worked ofﬂine? 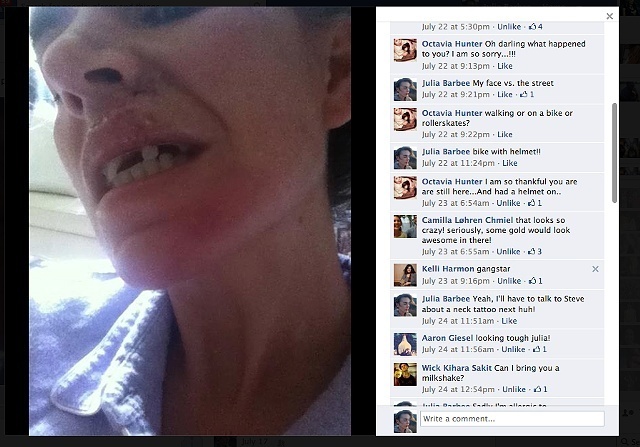 Julia Barbee: A local fashion writer published an article about my bike accident in response to my ﬁrst Facebook image and status update. It created an audience in the newspaper's online readership. I was posting images with a personal Facebook account. The text responses became an important part of the screenshots I kept to document that work. This was before I decided to change my Facebook to only a business page. While on bed rest from my accident, I started a personal Pinterest account as well, and pinned many of those images there. I exhibited the Oral series of portraits ofﬂine in an installation for a show called Content 2012 at the Ace Hotel in Portland, Oregon. I launched a new perfume called "Couple Found Dead in the Fragrance Hotel," taken from a word search of "hotel, perfume, and crime." I am using documentation from the Content show to sell "The Couple Found Dead in the Fragrance Hotel" perfume on Etsy. 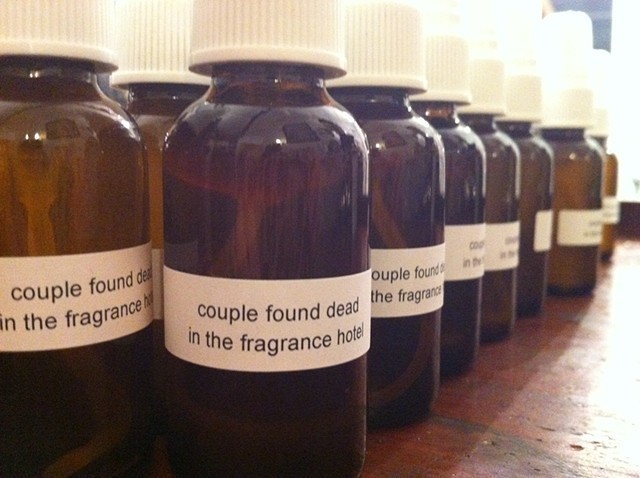 Couple Found Dead in the Fragrance Hotel Perfume
2012
perfume, glass, plastic
$47
AE: Interesting. So in this way, the online work ended up translating to an offline exhibition and then subsequently to an ephemeral line of perfume that combined both ideas. On the perfume and Pinterest front, I love how you couple an image of a bison with the text from a Craigslist ad that in some way relates to the smell of a lover. Talk a bit about how this functions on Pinterest. Why did you post it to Pinterest and not to Facebook? 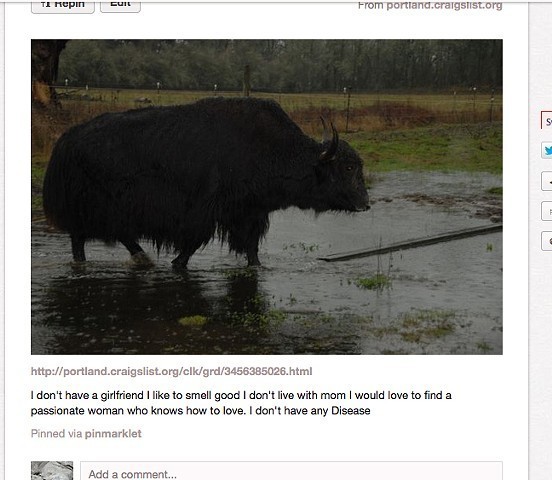 I don't have a girlfriend
2012
digital pin on Pinterest

JB: My online work is largely experimental, intuitive and framed by my interest in ephemera and scent. I am not interested in the proliferation of my splintered identity through countless social media accounts, but rather in the idea that the combined image and text become decentralized and do the work on their own. The largest critique people have of Pinterest is the lack of authorship, so I am exploiting that.

In light of the narcissism these social media sites breed, I knew publishing images of my face missing skin and teeth on any of them would fight directly against the promotion of a desire to be ME. Subsequent to the "pins," of the Oral series, I wanted to push my exploration of the aesthetic on Pinterest in particular, because the sole function of the site is to "curate." Initially I started searching for "bad" or "ugly" photography, thinking in terms of the visual language of the site. Those searches only displayed beautiful photographs of puns, and posters with animals saying things like "bad hair day," "bad boy," or kitsch photography. I knew Craigslist would be a source of "bad" or "ugly" images, without the use of the retro photo filters you find on Instagram. These images would be devoid of self-consciousness. I use Craigslist Portland for the tangibility of pinning images from local geography, and I started combining my ongoing collection of text from Craigslist related to smell with disparate images from Pinterest.

Etsy, where I sell perfumes, and Pinterest are starting to fold in on each other, just like Instagram and Facebook. Etsy has changed some of its language to emulate Pinterest’s. In the section where you see the most current activity of shops you "admire," the language is now "followers" and "following” like on Pinterest. Etsy has also recently reformatted that page with larger images to reflect the Pinterest-style layout. I’ve been a small business owner for a decade. I owned a deconstructed clothing and accessories line for ten years and have been an antique dealer for almost the same amount of time. Throughout this time, I have been fascinated by the combination of the DIY movement, the nostalgic aesthetic, the acceptance of blatant plagiarism, and the rapid growth of small businesses online. The homogenized, tribe-based aesthetic on both Pinterest and Etsy had appeal in the beginning.

AE: You mentioned that you started using Pinterest while on bed rest. What maintains your interest now, post-surgery and resting period? How has participating on Pinterest change the work you make with it and on it?

JB: Amusement derived from my own practice is largely what maintains my interest, so finding strange and intuitive combinations keeps me energized. I think it is healthy to critique a system where people are taking themselves and their taste way too seriously.

My initial relationship with most social media sites was that of a complacent user. However, all of these social sites ultimately center on self-promotion. Promotion of my lifestyle, my taste, my world, my products, and your jealousy of me and my style. And I eventually find myself wanting to critique the behavior I start to abhor in myself as a result of participation in these virtual worlds. Pinterest in particular gave rise to the misuse of the word "curate" I would postulate. 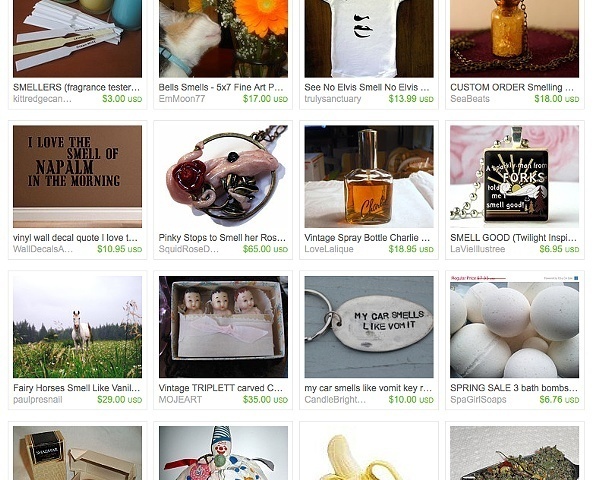 Smell
2012
Etsy Treasury List
I did an olfactory search of the word smell, as part of my art practice, and picked one item per page, placed them in order, and restricted myself to choosing something on every other page.

AE: I’m also noticing that on your Etsy project, Treasury Lists, you curate a collection of work that wouldn’t normally end up on that ecommerce site. What’s the deal?

JB: My Treasury List work on Etsy is a critique of their DIY homogenized aesthetic, and my Lists are developed through scent-based text searches. I highlight work that has low numerical value measured in "Views" "Admirers" and prior inclusion in "Treasury Lists;" on some level it is my exhibition and promotion of the underdog. Looking at my practice on these respective sites as virtual exhibition is critically important; I want to create dialogue from within, rather than trying to launch a critique externally. However, documenting the work through my website allows me to reach both willing, and unwilling participants in the conversation. 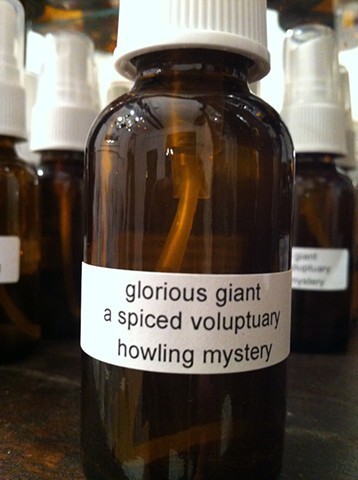 AE: I'm interested in your fascination with the ephemeral nature of perfume; perfume exists as a physical form, yet the essence of it and the responses it produces can travel through the Internet "air," as such. How did you become interested in perfume-making as an art form?

JB: While in graduate school, I was examining my career in independent fashion and working with physical materials as wearable sculpture. I became interested in perfume as sculpture. I used my body as site, removing visual cues and performing with scents. It remains a challenge to communicate the invisible through visual means. I use text a lot. I am interested in the evocative phenomena of poetry, which sometimes appears in the unexpected form of a Craigslist personal ad. It is a means to translate these ideas because language is similarly ephemeral. My visceral, scented work can challenge the visual culture, but it does make the pictorial representation of my practice a challenge.

AE: I’d like to take a turn away from social media sites as spaces for artmaking toward the more straight up social media strategy questions. How do you use Facebook for personal use? For professional use?

JB: I hated Facebook from the beginning and saw it solely as a means for self-promotion and voyeurism. If I had my druthers, I would not use the Internet much. So the fact that my practice is moving so heavily towards the digital medium is a stretch for me personally and professionally. I try to see it as a tool like any paintbrush or camera. I interact on Facebook as a business owner and artist. This does include personal relationships with clients or friends, but I keep my personal life as private as possible.

AE: Do you use Twitter and Tumblr? I didn't see links to those on your site. If you don't use them, why is that?

JB: I don't use Twitter and Tumblr. I would rather spend more of my time offline; it's a form of self-protection. I want to fight social media's influence on the way I see myself. The ease with which I can find my value in "likes," "friends," "followers" and "repins" is alarming. I don't want to live my life online to the degree that I forget my neighbor who sleeps in the street. So much of the world lives without computers at all. We live in a scary world of mind-altering affluence.

AE: I agree. Spending too much time on social sites can really warp one’s sense of relationships. But what about Craigslist, another site that interests you. Do you see it as social media site? Why or why not?

JB: I think that ultimately it is a social site. People are promoting themselves on Craigslist as much as on any other site. There are people who regularly post to different forums, and have created personas through personal ads. In front of a screen, our various representations of ourselves collide with each other.

AE: Do you see much difference between our online and offline selves? Or do we just flow between the two?

JB: I think those things flow most of the time. Online personas are likely to be much harsher, dirtier and more fantastical. They can be prideful and judgmental, and I guess we just have to decide which personas we want to spend time feeding.