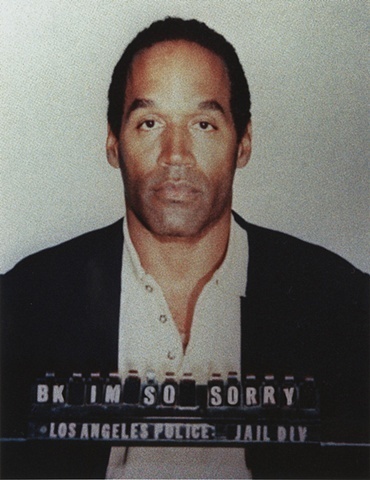 OtherPeoplesPixels: Tell me about The Love Renegade and what inspired the shift in the perspective from which you are working.

Elizabeth Axtman: The Love Renegade came to be while sitting in a restaurant. I was trying to understand my own heartache, heartbreak. I was reeling from being betrayed by the person I was closest to (and please believe it was on some Dynasty, Melrose Place, Gossip Girl level of betrayal… I have regretfully discovered the shit they write on these shows really happens to people in real life) and I was trying to figure out how was I going to get past it. I was surprised that within the pain I was feeling I could also reach feelings of compassion for this person. I was beginning to understand that people who harm others are in far deeper pain than the people they offend. This gave me mild comfort and any amount of comfort then was worth investigating.  I wanted to know everything about love, forgiveness and compassion; how people were able to find it and how people were able to implement it. I started reading and watching everything on the subject. It began invading me from every angle, so much so it was finding its way into my work. Suddenly, I wanted the art I made to be more than calling racist assholes, racist assholes. There are enough artists of color doing that shit already (I wouldn’t be missed) with plenty of rich white art collectors/curators financing it (a very dysfunctional cycle). So The Love Renegade came from where so many other art works come from: heartbreak and the journey out of it. The difference now is that the journey is one of love, forgiveness and compassion.

OPP: Humor is still present in your Love Renegade work but is differently approached. Your video Dark Meat from “before” is disturbingly funny; splicing a Stone Phillips interview with famed serial killer Jeffrey Dahmer (Phillips asking Dahmer “Did race matter?” in regard to his victims and Dahmer answering it did not by citing the various races of three of the men and boys he killed) intercut with the man-eating plant, Audrey II, from the cult-film The Little Shop of Horrors asking to be fed (“Feed me... must be fresh... must be black”). 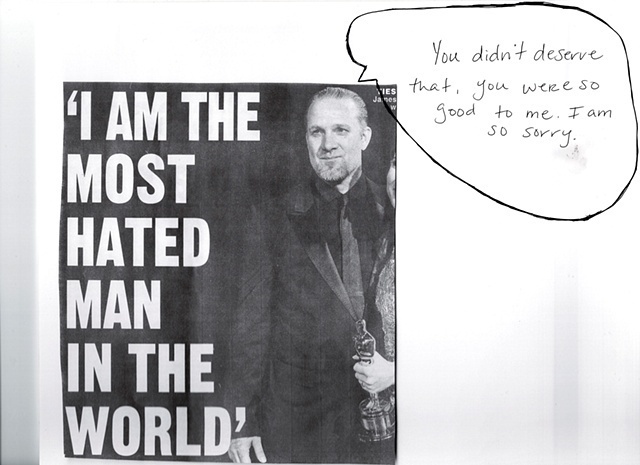 Your piece, The Love Renegade #2: Forgive Me which features a newspaper headline and picture of actress Sandra Bullock’s ex-husband Jesse James after news of his infidelity was publicized. The headline quoting James reads ‘I am the most hated man in the world.’ In a thought bubble pointing to James’s head drawn on top of the clipping, you (as The Love Renegade) have written, “You didn't deserve that, your were so good to me. I am so Sorry.” Part of the humor in the Jesse James forgiveness piece functions with our knowledge that collective forgiveness is unusual in our society. Can you speak about how humor plays out in these two pieces and more generally in your work “before” and “now,” as The Love Renegade.

EA: Regardless of the shift in my art practice… humor remains a constant because it’s such a big part of who I am (but I’m learning not everything I make has to involve a joke). I worship comedy and everything about it. My interest (obsession) with comedy has always made me feel like a bit of an outsider in the art world, because so many of my artist friends worship everything about art: theory, history, current events aka art gossip…. and I don’t. I mean seriously, the only time you might catch an art theory book in my hand is if my friend asked me to hold it for them while they tied their shoe. Nothing about MAKING art bores me—in fact it thrills me but getting trapped in a conversation about art theory makes me wanna blow my fucking brains out.

In the piece Dark Meat the humor I used is a way of softening my screams of “ARE YOU FUCKING KIDDING ME?” I was pissed at how little Jeffrey Dahmer was taken to task on the subject of race as well as by how little a black man’s life is worth in our country. Had the roles been such that it was a black man killing, raping, dismembering and eating blond haired white women……this country would go buckyballzbananas and reinstate lynching. In the video I used an interview with Stone Phillips and Dahmer because it was the first time I actually saw anyone ask him about race. In the interview he lists the race of all of his victims except for the black men (which were the majority of all of his victims).  His inability to mention them spoke volumes to me.  I mix in the man eating plant, Audrey II from the Little Shop of Horrors to fill in the gaps of Dahmer’s lapse in memory of the 11 black men he assailed. To me the man-eating plant is what lurked behind Dahmer’s blond hair and blue eyes, which helped him stay out of jail 18 victims too long. Dahmer’s desire and repulsion in regards to race and sexuality were off the fucking charts. I’m not done with him yet.

I like that you mentioned “collective forgiveness is unusual in our society,” in regards to my Jesse James piece. I’ve had a few people tell me how soft my work is now that it’s focused on love and forgiveness. I never get my back all up about it but I laugh to myself and think “this muthafucka has no idea how hard it is to be loving to someone who acts so ugly and hateful.”  I still have those knee-jerk ego reactions where I want to tell people about themselves (harshly) but I check myself, because now I’m more interested in starting conversations then ending them. I am all too aware that we live in revenge culture and how that is far too often people’s line of defense. The entire series is about getting people to hopefully see that they too have been untoward to someone at some point or another and have desired to be forgiven and loved anyway. It’s about how often we forget those times and withhold the very thing we desire when the roles are reversed. It’s about squandering an amazing opportunity to be compassionate just to appease our egos.The unconscious hypocrisy is rife with humor to me  Every person in The Love Renegade series are just stand-in’s for us. Ha! and Got Ya!

OPP: You recently exhibited Love Letters (Make it Rain) at The Kitchen in NYC. Viewers had the choice of sending a letter to Sarah Palin, Rush Limbaugh, Bill O'Reilly, Ann Coulter, Westboro Baptist Church, and Glenn Beck. How did you select each public figure?

EA: I chose them because I think they have on several occasions acted a hot ugly mess in front of a camera that broadcasts to millions of homes all over the world. They have encouraged and condoned: greed, racism, classism, sexism, homophobia, xenophobia and revenge... your basic asshole behavior. We are all guilty of these things in our lives (varying degrees of course) and if you say you aren’t, you’re a liar and not ready for this work or conversation. I’m just posing the question: what can change in your life if you show love to someone who is acting in its opposition?

OPP: As I understand, a great number of letters were mailed over the course of the exhibition—have you received feedback on the project from participants or other viewers? Have the letters worked?

EA: I was thrilled when The Kitchen told me that over three hundred letters had been sent during the course of the exhibition. I received beautiful letters sent to me by people telling me how my work has touched them. The response was really great from participants and folks who just happened on to my website. I’ve had an art space in New Zealand show interest in having the Love Letters come all the way across the world. Folks have been in to it. Have the letters worked? I know Glenn Beck is no longer on the air and Fox News has been trying to tone it down. I also heard some state was trying to ban Westboro Baptist Church from attending funerals… it was kind of eerie how it was happening all around the same time. It isn’t so much what I want to see happen in these figures’ lives as what I want to see happen in everyone’s life. I desire to see people take responsibility for the energy they bring into the world and make far less decisions on behalf of their egos. Take my word for it: I am a recovering egomaniac and as such I know I’m responsible for the emotions I choose to experience and the behavior I choose to express… I no longer put the blame for these things in another’s hands.

OPP: You exhibit widely, how does working toward a deadline for a show influence your process? In fact, your first solo exhibition with the San Francisco Arts Commission is currently up—what are you working on for the show?

EA: Well I like to call “deadlines”, “time frames” it has a better ring to it. They definitely influence me to throw things across the room, bang my fist on the table, hurl expletives at my computer that would make a Boston Bruins fan blush, then apologize to my computer with the following: Mommy didn’t mean it, I’m just under a lot of pressure with these “time frames,” and no sleep. Time frames motivate me to get the shit done, it’s a part of the creative birthing process. There will be pain and there will be joy.

Yes, I’m working on a year-long (hopefully just a year) project entitled The Love Renegade #308: I Love You Keith Bardwell (Phase I & II). Keith Bardwell is the latest person to catch the attention of The Love Renegade, because he refused to marry an interracial couple in 2009… you heard that right, 2009. Bardwell (an elected official) explained his refusal to marry the couple was, because he “had seen countless interracial couples where the children were rejected by family members, and he didn’t want to see that happen again.” The piece consists of interviews of biracial people from adulthood to infancy, kindly letting Bardwell know that they are doing well and his concern for them isn’t necessary. Alongside, interviews of interracial married couples telling the viewer why they wanted to marry their partner. In this lens love (not race) can become the forefront of how these partnerships began and biracial people are given back their voice in order to speak on their own behalf. Upon, hearing from the source any viewer who has shared in these sentiments will be left to address what’s truly resting behind their concern for the children. It’s a long work in progress.

The Love Renegade #308: I Love You Keith Bardwell (Phase I)

OPP: Does The Love Renegade have advice for emerging artists? 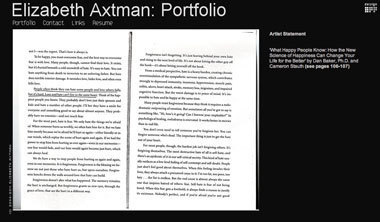