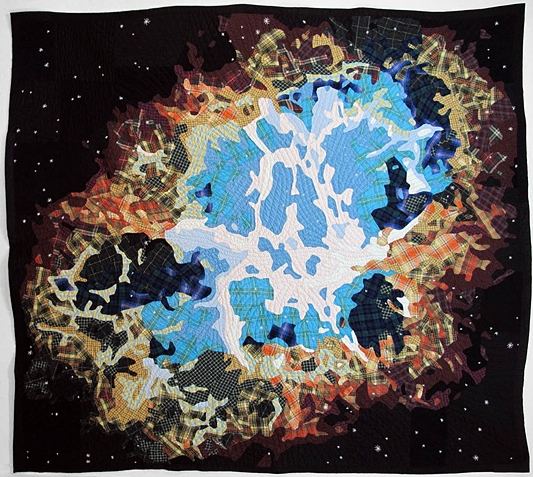 M1 V2 (The Crab Nebula)
2011
Quilt
87 inches x 78 inchesOtherPeoplesPixels: Tell me more about your fantastical persona for your quilted wall pieces. You are a space trucker traveling back and forth from rock to rock delivering salt and vinegar who has a lot of time on your hands prompting you to download a grandma program that has taught you how to quilt—do you create all of your work from the perspective of this persona? Jimmy McBride: Yes, all of the quilts are theoretically from the perspective of the space trucker.  Early on there was no story to go with the quilts, but they're a lot of mindless labor to make and I have a very fertile imagination and love of science fiction. Also, at the time I started making the quilts I had taken a break from "making art" and just wanted to try doing something I had never done before. One thing led to another and a new artistic practice was born. After a while I developed the space trucker as a way to contextualize the quilts and put them in a framework that would make sense. With this more conceptual take on quilt making I also wanted bring it more into the realm of "high art" rather than a purely craft process.  OPP: Do you go by your real name, Jimmy McBride, while “in character”?JM: There's a lot of the story that's still in my head, including the trucker’s name and how he lives, where he comes from, but I haven't figured out how to get that information out. Right now people just assume that Jimmy McBride is the name of the space trucker.OPP: Your space trucker persona makes me wonder what kind of art you made while growing up. Did you have imaginary friends as a child? Or perhaps a science fiction-inspired imagination?JM: All of the above. There was a special effects TV show on when I was a kid called "Movie Magic," and the very first thing I wanted to be was a special effects makeup artist. Despite growing up in the suburbs, my house was on a lot that included a large wooded backyard with a creek running through it. I was an only child with not many friends and I would run around the woods all day making up epic tales of gods and monsters. I made a lot of paper mache sculptures and watched a lot of Star Wars and Star Trek.OPP: How does the genre of science fiction influence your work, generally?JM: I'd say its the basis for my work. Initially most of my influences came from movies and TV: Star Wars and Star Trek: The Next Generation, Aliens, Bladerunner, 2001, Dune, Mad Max, Waterworld, and Firefly. Recently, I've started reading a lot of science fiction art and concept on the internet: Assimov, Stross, Gibson, Dick, Le Guin, Vinge, and Herbert, for example. A couple of years ago I started doing a lot of research on pirates as well which has influenced the story. I've found that the more that I take in from as many different influences as possible makes the story I tell through my work that much better and more complex. 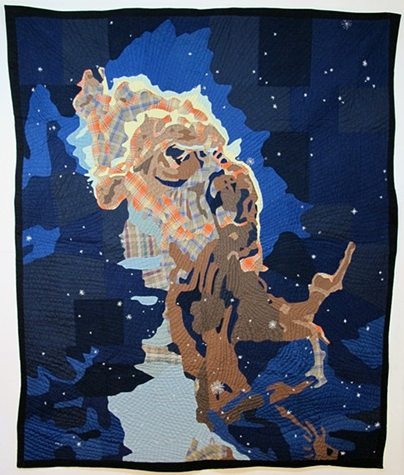 OPP: You keep a process/research blog that is accessible from your website. How do you approach selecting the source images you share on your blog? JM: The idea for the blog is to give a "behind the scenes" look at what I do. I like to keep my site as streamlined as possible including the story of the space trucker and keeping everything conceptually sound and coherent. With the blog, I get to show how things are going in the studio, what's influencing certain pieces, showing how things come together and explaining certain technical aspects of how I actually construct the quilts.  As with the main site, I try to keep the images oriented towards the "how and why" of making the quilts and not too much extraneous info like what I had for lunch. I do stray every once in a while, but mostly it's just where I get my material, how I make the patterns, etc.OPP: Seeing some your preliminary color and fabric charts and seeing the quilts in-progress emphasizes how involved and time-consuming each piece is. How do you select the fabric you quilt?JM: All of the fabric for the quilt tops are from second hand stores. I especially like this aspect of the quilts both for practical and conceptual reasons. Quilts originally were made from clothes that were worn out or things that were going to be discarded, so I like the nod towards the history of quilt making, but also there aren't really many fabric stores on the space truckers route so he has to use any fabric he can get his hands on. The fabric is mostly button down shirts. I try and match the colors of the shirts to the images as best I can.  After working with this material for so long, I've found that small plaids and patterns give me the best matching capabilities. 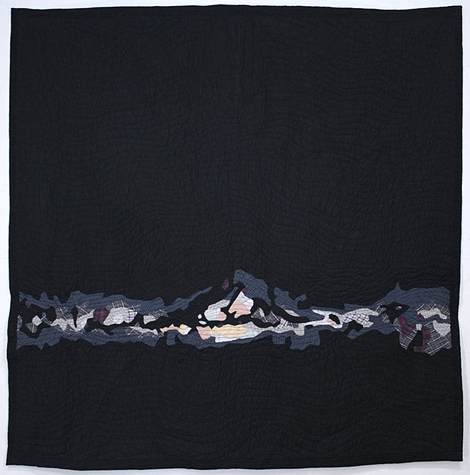 OPP: Are you self-taught or did you have a human equivalent to your persona’s “grandma program” to instruct you in sewing and quilting?JM: I am a completely self taught quilter.  My mom taught me how to do a little sewing when I was young and I knew my way around a sewing machine when I began, but I basically knew nothing about quilting. Ironically, I learned a lot about the tricks of the trade of quilting by watching YouTube videos.OPP: You’ve recently received a $25,000 AOL’s 25 for 25 Grant and had a show at The Museum of Contemporary Art in Oslo that traveled to The Museum of Contemporary Art, Bergen (Norway)—congratulations. Tell me a little about the impact your increased visibility has had on your artmaking.JM: Thanks! The grant was a watershed and complete surprise. I did apply for it, but thought it was a shot in the dark. The grant allowed me to take a break from working a day job for a while and just focus on making art. It's really been great getting my stuff out into the world, having people see it, and giving me feedback. At the end of the day though, it hasn't really altered my artmaking; it's still me with some old shirts and my sewing machine.OPP: What are you working on now?JM: Currently I'm working on a quilt based off of an image of M83. M83, or Messier 83, is the technical name of the Southern Pinwheel Galaxy which is a barred spiral galaxy in the constellation Hydra. Charles Messier was a French astronomer that first catalogued permanent deep space objects, giving them numbers to differentiate between stationary objects and moving ones, like comets. After that I'm going to focus on more of the Sci-Fi storytelling quilts, and less on direct representation of images of space. 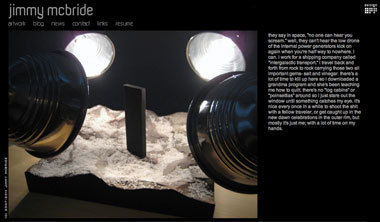