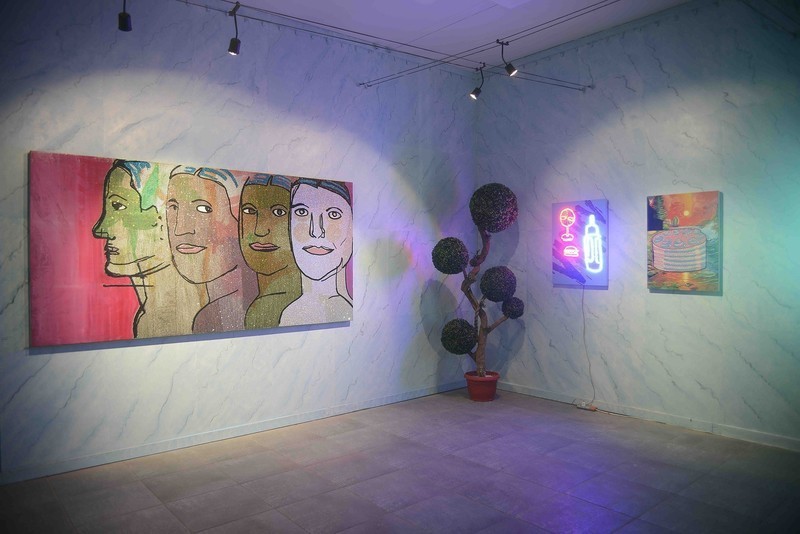 How Not to Be Small and Silent (2017) Installation view.

SABA KHAN's multimedia work traffics in the language of memorial, monument and public art. From lush beaded paintings of cakes to miniature dioramas of a bureaucrat's boring office; from flashing LED signs of stereotyped "Islamic Art" to embellished textile banners honoring the mundane generator, she balances grandeur, artifice and satire in order to explore the cracks in the facade of life in her native Lahore, Pakistan. Saba holds a BFA from National College of Arts, Lahore and an MFA from Boston University, on Fulbright Scholarship. Her work was included in the 2018 Karachi Biennale and the 2020 Lahore Biennale. Her solo exhibitions include ONE (2019) at Contemporary and Modern Art Museum and Making a Contemporary Landscape (2018) at O Art Space. In 2014, she founded Murree Museum Artist Residency, an artist-led initiative in a British colonial hill-station, and in 2020 the satirical artist collective Pak Khawateen Painting Club was born. Saba lives in Lahore, Pakistan.

OtherPeoplesPixels: Tell us briefly about your artistic path. Have you always been an artist?

Saba Khan: I think it is hard to say when one turns into an artist. It is usually declared by others, a title that one earns over time and with experience.

I continued producing work after my undergrad. In Pakistan we are art educators during the day and artists by night. It is understood that most of us artists would pursue jobs in academia, where art colleges—rather than art galleries or art districts— become centers of contact and spark development of ideas and networks. However, teaching takes away a large chunk of the day and also slows down one’s practice. But both have been hand in hand throughout my career. 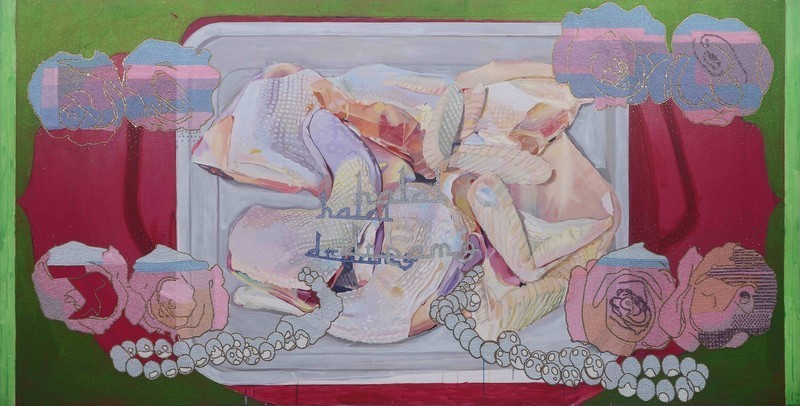 OPP: Satire and simulation are dominant strategies in your work. Tell us why? How do you use these strategies aid your conceptual agenda?

SK: Living in Pakistan is living amidst chaos. Although an outsider may view it as a monolithic, conservative, Muslim country but it is more complex and varied. With a 4000-year-old culture, while also being a young country, it intertwines and weaves many rituals, traditions and contradictions. Each day is a lived experience of navigating into the city, which is broken up into medieval, colonial, modern and new-town sections, as a time traveler through Lahore’s maze of concrete with patches of old trees and greenery.

The country also has stark contrasts between the rich and poor. These strange experiences, interesting yet frustrating, are sometimes best translated into satirical imagery with tongue in cheek humor, rather than being didactic and self-righteous in ones’ work. 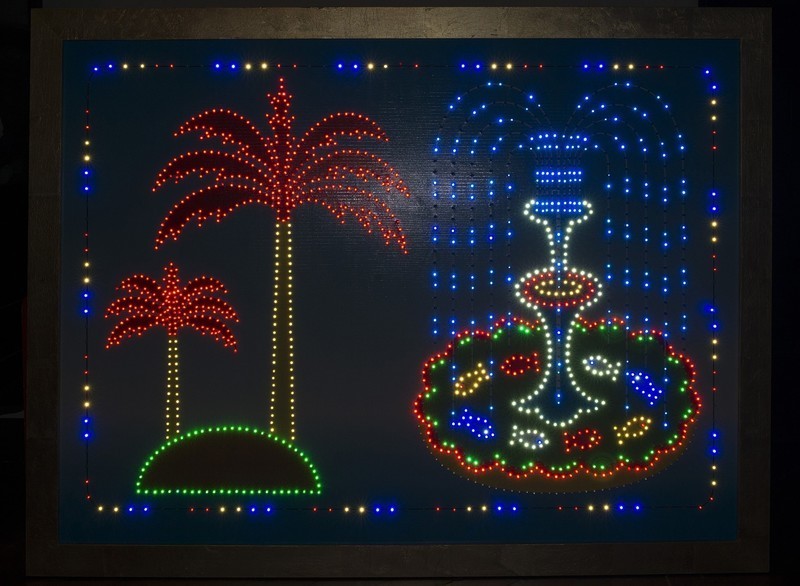 OPP: How do you use beads, crystals and flashing lights to emphasize un-flashy truths? I’m thinking about Contemporary Islamic Art (2017) and The Generator Series (2010), among others.

SK: My work took a significant turn once I came back from a two-year Master’s stint in Boston. I came back to materials which I missed and did not have access to in the USA. We have large complexes of bazaars that are a dizzying labyrinth of shops of artisans who are practicing their craft for a variety of clients. They range from electricians working on custom made LED signboards to embroiderers embellishing wedding outfits. I missed the qualities of the hand-made in the products of the west. The slight errors and unexpected malfunctions or the misread drawings/ instructions become part of the work.

Contemporary Islamic Art, a buzzing, flashy LED sign, was a commentary on the hype—or buzz—of what western art dealers would call ‘traditional’ or ’meditative’ art from the middle east and south Asia. These tropes, circulating out of context, are used to attract and sell the exoticized and faux images of art from this part of the world. Without any knowledge or research, these works are distributed in art markets as oriental pieces of fetishized ornaments.

The generator series was made on the types of generators observed around the city that were used as an alternate to frequent power cuts. During the time these tapestries were made, we were experiencing up to 18 hours without electricity from the grid. The commercial neighborhood I lived in would light up with a cacophony of generators emitting noise greater than the prescribed range in industrial zones, with smoke incessantly puffing out. Now with solar power and better government arrangements, things are not as bad. 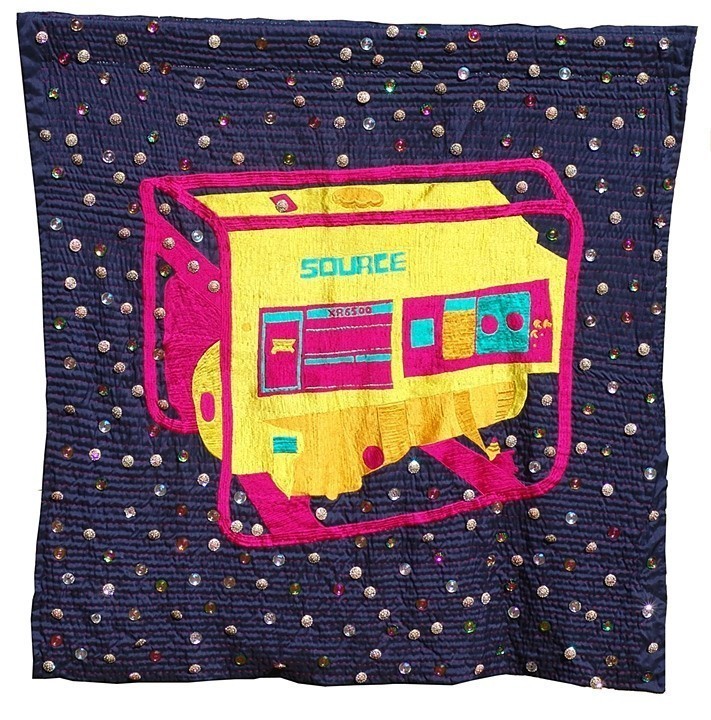 OPP: Could you translate the Urdu text that hangs on the wall, highlighted by those luxurious drapes in Monuments and other Follies (2019)? 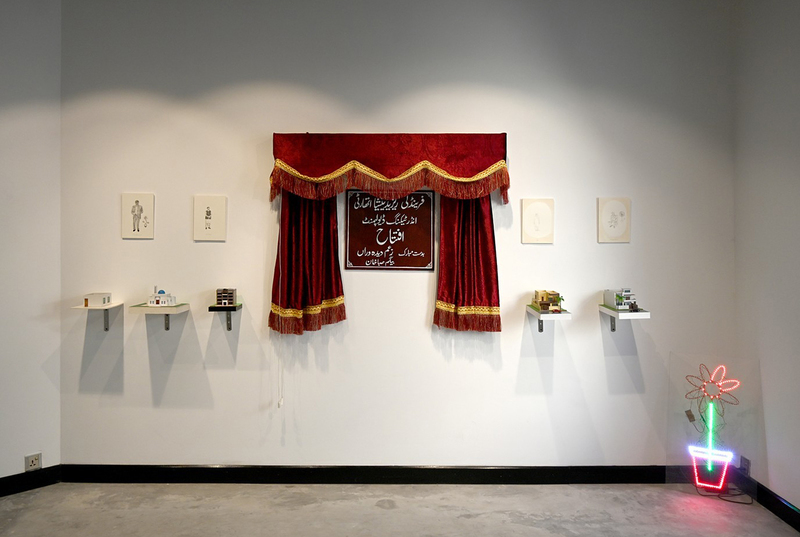 Monument and Other Follies (2019) Installation shot.

OPP: What drew you to the form of the plaque with curtains?

SK: There are hundreds of plaques around the city erected on footpaths and intersections, commemorating road constructions by local politicians. Plaques with curtains being drawn open is a regular site on the news with politicians opening mega projects or private housing schemes. The ceremonies are almost comical, because they are a repeat performance with different actors every time launching white elephant projects. Strongest commodities are the private housing schemes which are an answer to the government’s problem to housing. Large chunks of agricultural land are sanctioned over ‘for the public good’ and turned into plotted, pieces of private land by real estate tycoons, many of them falter or turn out to be fraudulent leaving behind hundreds of disgruntled and deceived civilians that fall into litigation suits for decades.

I went to a colonial bazaar to get this curtain made because I was told there was a curtain shop that specializes in ceremonial drawstring curtains. The young man helped me with the design, dimensions and also picked the official color. 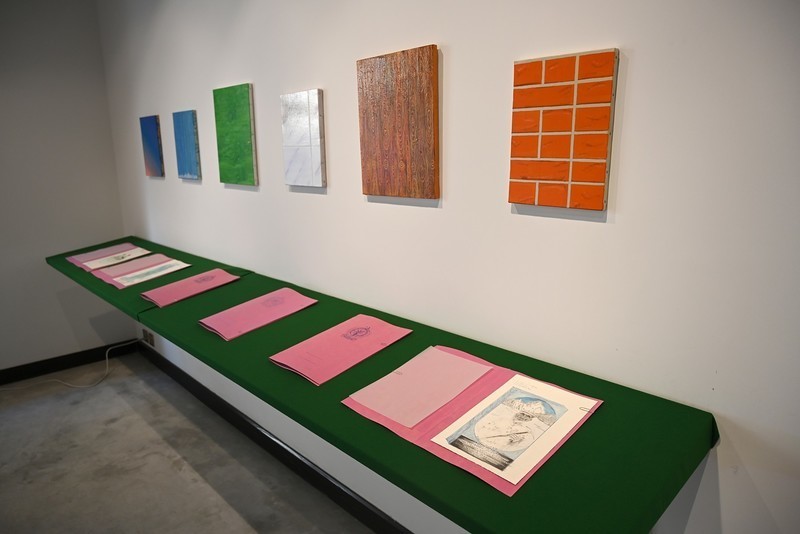 Monuments and Other Follies (2019) Installation shot.

OPP: What are you choosing to memorialize/monumentalize in this body of work?

SK: The series of files in the project mimic government files; thick, rough, recycled cardboard with papers stuffed inside and tied together with a shoe-string. There are numerous monuments and decorative structures in every town commemorating unknown heroes and events or are a way to ‘beautify’ city corners. The low budget reliefs of dead men look like caricatures making the events even more unworthy of remembering. My fictional bureau for the project proposes monument-making for major, yet embarrassing historical events. 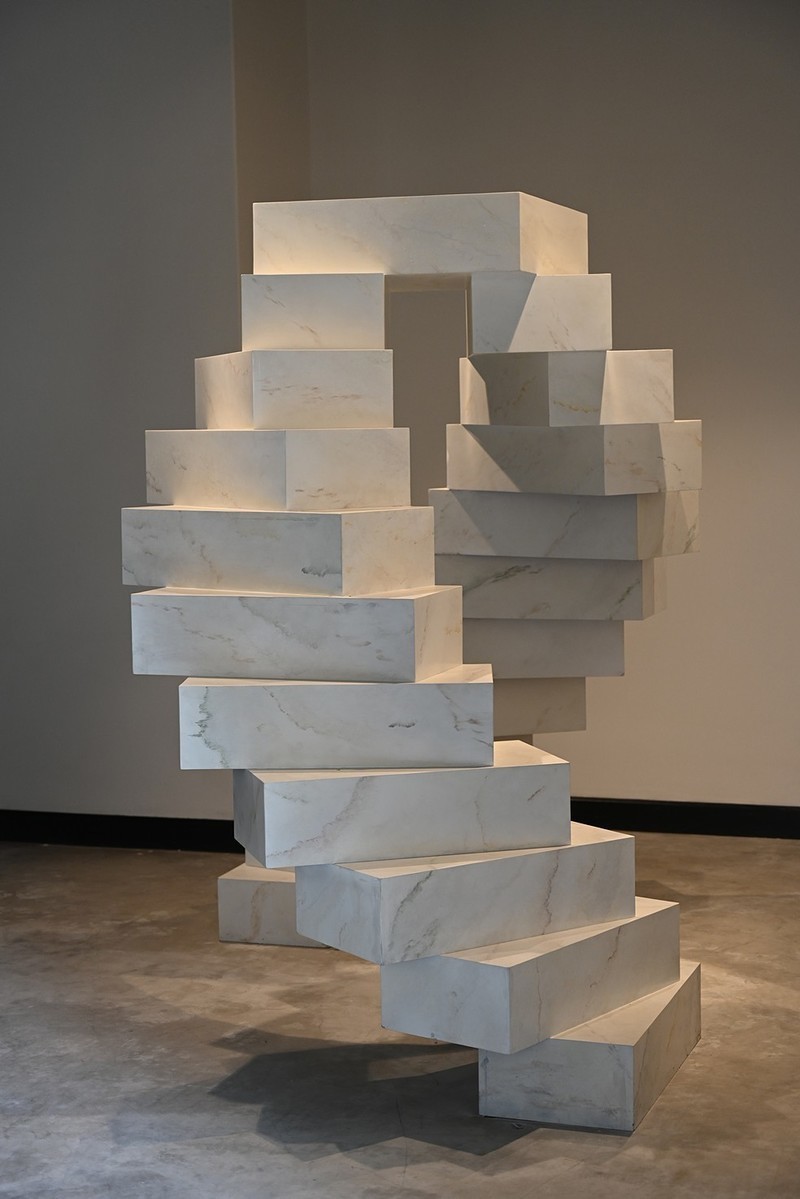 Monument for an Undecided Event (2019)

OPP: Tell us about Pak Khawateen Painting Club, a satirical collective of female artists. There doesn’t seem to be any painting in your recent exhibition of the same name.

SK: We don’t particularly paint. Instead we subvert the notion of a female artist by building large machines which don’t produce anything but generate information on power, electricity and water.

Painting has always been a past time for upper middle-class women. In the pre-Partition era (before Pakistan separated with India), established artists would setup studios and teach women painting on the side as a means of a steady income. The stereotypical image of the ‘woman artist’ has been embedded in the collective psyche as an upper middle-class housewife painting on an easel inside her drawing room. Painting is seen as a hobby particularly for women as a pastime that doubles as a means to help decorate the walls of her husband’s home.

Pak is a short for Pakistan and also means pure (as women should be). These not so pure women of our collective, venture out into expeditions—women traveling without male chaperons is considered unsafe—entering into spaces where men make decisions for the nation on water and power.

OPP: Alongside your active studio practice, you also founded the Murree Museum Artist Residency. Tell us about the residency and its location. How has the pandemic impacted the residency?

SK: Murree is a small British colonial hill-station that was used as a retreat for the elite British officers to get away from the Indian heat and was also a stopover before entering into the valley of Kashmir. However, in a post-colonial era the town has become toxic with excessive construction, deforestation and overpopulation from an influx of tourists. The decay of the town, my own family histories and my father’s research book (Murree During the Raj: A British Town in the Hills by Dr. Farakh A. Khan) on its colonial era led me to study the town further by inviting artists and initiating theme-based residencies on the ecological issues. The program ends with a public exhibition in the town center and an artists’ book which became the final compilation of art projects. The book launch and reiteration of the exhibition takes place south in the port city of Karachi at AAN Gandhara-Art Space. Unfortunately, during the Covid our generous donor had to reassess his priorities and decided to sell the cottage in which I invited artists for the summer. 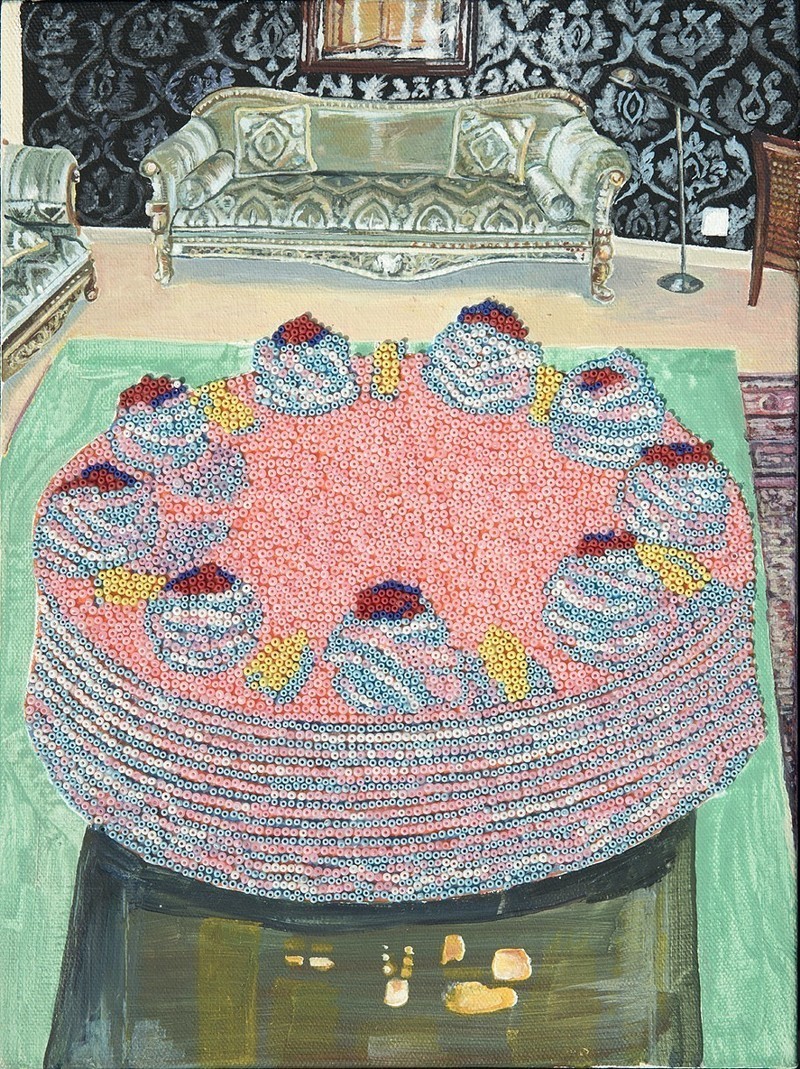 OPP: Oh no! I didn’t realize. I’m sorry to hear that. Where have you been focusing your energies instead?

SK: As I write this, I am currently traveling in remote parts of the country with the Pak Khawateen Painting Club, exploring ancient and medieval cities and British colonial and modern barrages built to control the main River Indus that cuts vertically across the country. Some sites are so removed with small, nomadic populations living with limited communication. The ancient cities are some of the oldest in the world dating back to 4000 BC to 2000 BC. The water, a life giver, has been the center for trade, agriculture, rituals and power. Our research is supported by Sharjah Art Foundation and Graham Foundation. This year we will be completing the final artwork.