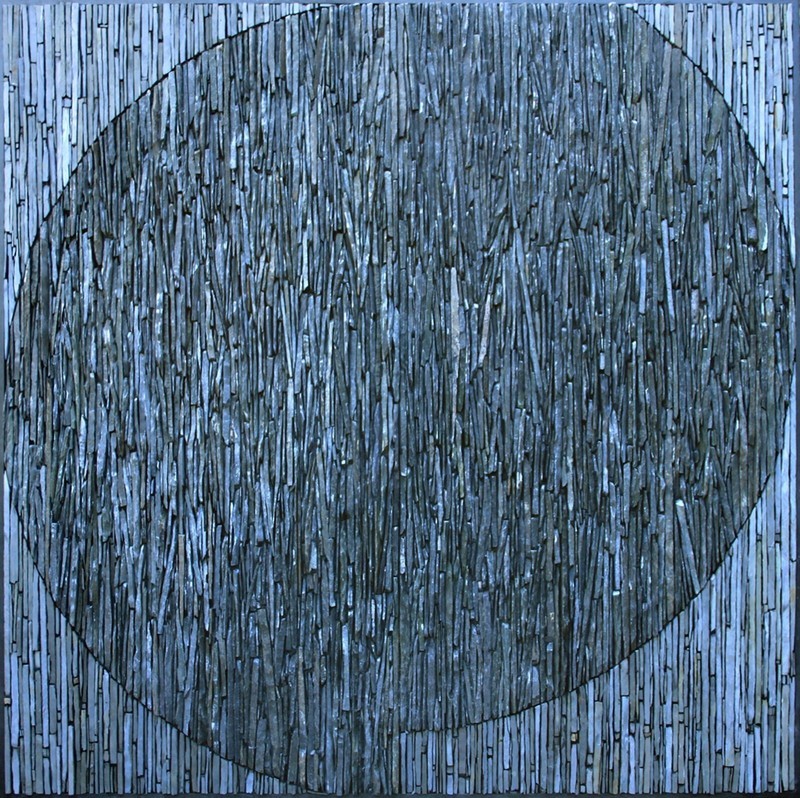 Influenced by Minimalism, DUGALD MACINNES explores the materiality of stone and its geologic origins in framed, slate and shale mosaics. He employs the natural color and physical properties of his chosen materials in compositions that honor the processes of their creation. Dugald studied mosaic murals at the Glasgow School of Art (1970-1975). He went on to earn a Post Diploma in Design (1975), a degree in Geology (1985) and a Certificate in Field Archeology (1993). He is an active member of the British Association for Modern Mosaic and is a regular Guest Tutor at the Chicago Mosaic School. His mosaics have won first prize at the North Lanarkshire Arts Association exhibition in 2003 and the International Mosaic Exhibition in Chartres, France in 2004. He has exhibited internationally in Scotland, Greece, Austria, Italy, France, Japan, England and the United States. Dugald lives and works in Kilsyth, Scotland.

OtherPeoplesPixels: Tell us about your history as an artist and with mosaic as a medium.

Dugald MacInnes: In August of 1971, I entered my second year of studies at the Glasgow School of Art in the department of Mural Design and Stained Glass. This event coincided with the arrival of a new senior lecturer from Edinburgh College of Art who took over the department. His name was George Garson, and he changed the course of my life.

Garson had a strong working class background, and he laboured in the Scottish shipyards for many years while developing his life-long passion for painting, so much so that his portfolio gained him entry to the Edinburgh college. It was in his third year there that quite by chance his senior lecturer, John Kingsley Cook, asked for a volunteer to assist him in the creation of the fourteen stations of the cross to be executed in sandstone and glass smalti for an Edinburgh church. It was this commission that engendered in Garson a passion for mosaics in stone. On a visit to the west coast of Scotland, he discovered slate with its varied colours and characteristics, a medium that he continued to employ for many years.

In my second year at Glasgow, Garson invited me and fellow students into his studio to show us some of his small, slate mosaics. If ever there was a ‘Damascene’ moment in my life, then that was the moment! I was brought up on the west coast and was familiar with the slate there. It was the very same that Garson had used. From then on, that stone became my medium above all else.

I was not classically trained by Garson, who saw himself as an expressive artist, an axiom that I very much adhere to. From time to time, I return to my roots and produce small pieces of a more expressive nature. These are very important to me; they remind me of that moment when I was introduced to mosaic and they also serve, hopefully, to keep my integrity intact. 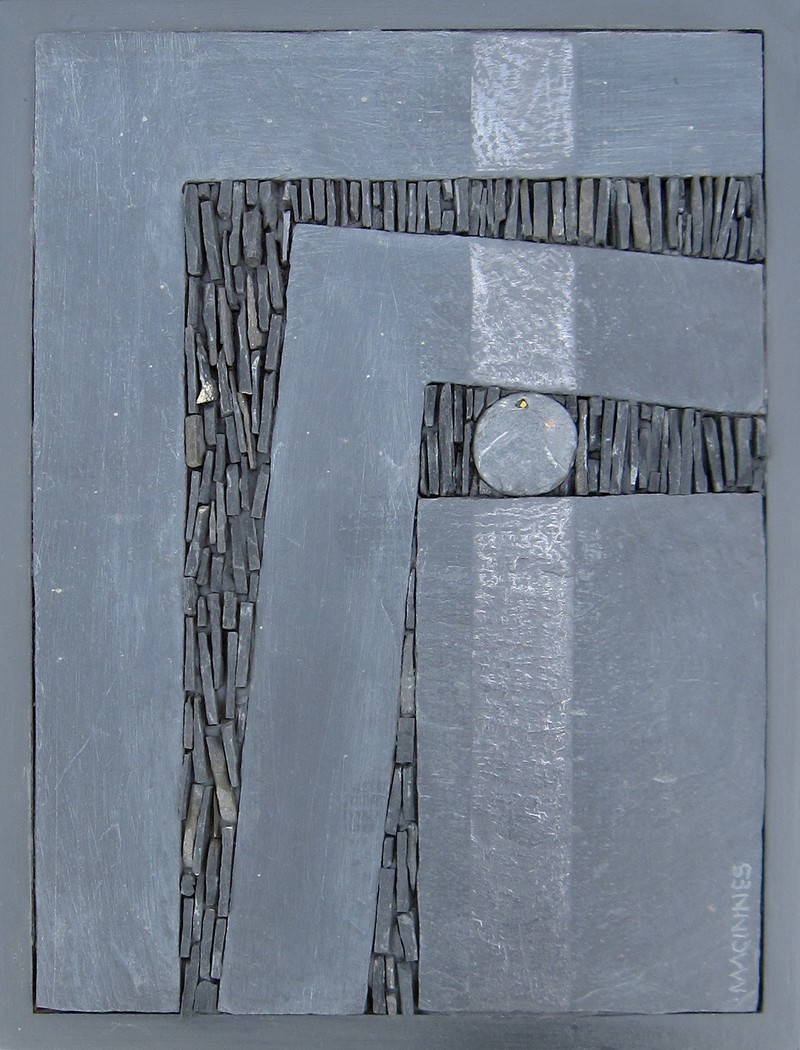 OPP: Upon first glance, I thought your work was geometric abstraction in conversation with Minimalist painting. I was thinking of your work in relation to Post-minimalism. But after looking more closely and reading your titles—Fault Zone, Subduction and Tectonic Drift, to name a few—I can see that these works are much more about the materiality of stone and its geologic origins. Thoughts?

DM: Yes, it is true to say my work is about the materiality of stone and its geologic origins, but I have been strongly influenced by minimalist painting. The work of Mark Rothko, Barnett Newman, Jasper Johns and the English artists Ben Nicholson and sculptor Barbara Hepworth were particularly influential, as was Russian Constructivism. For me those artists conveyed the very essence of art through the removal of extraneous elements.

Geology, however, is my principal context. Its forms, textures and, to a lesser extent, its colours play an integral role in my work. I attempt to tune into the beating heart, if you like, of the earth itself, its magmatic interior being the ‘life blood’ of our very existence. The rhythms created by the repetitious use of small slate ‘fingers’ in many of my pieces serve to express the planetary pulse beneath our feet. I refer to this use of geology to express my responses to geology as Lithospherics.

I remain excited about the qualities of stone though. Scottish slate has undergone dramatic changes through the effects of heat, folding and faulting with the result that it can be found in a friable state, easily broken by hand, in contorted forms and smooth, steely sheets that glisten with an oily sheen. 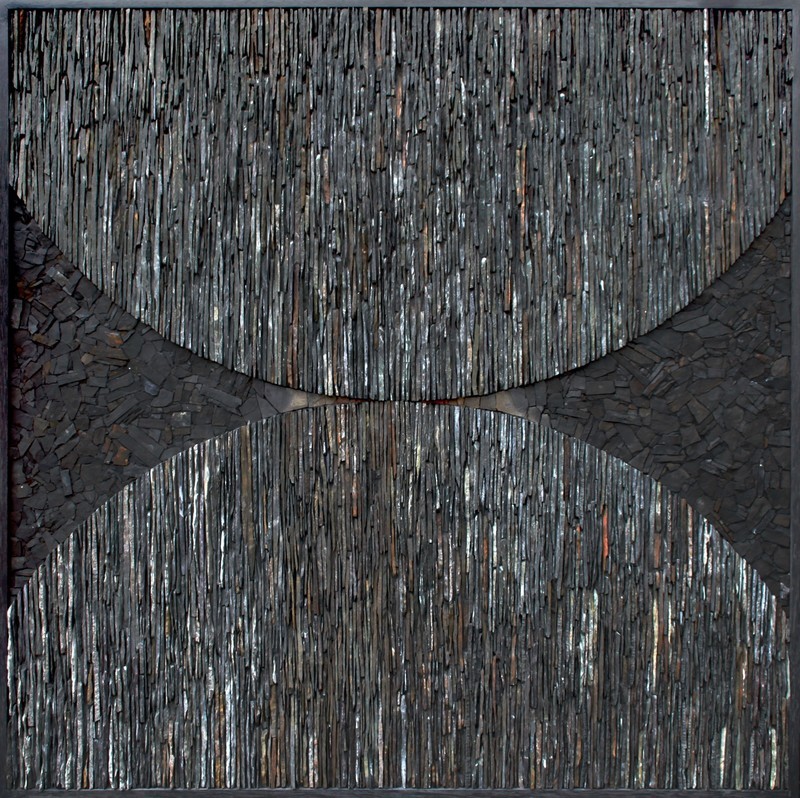 OPP: How do you source your material? Why is it important that it is Scottish Shale and Slate?

DM: As I have said, I source my stone principally from the west coast of Scotland but other locations of my homeland provide material of different forms and characteristics. I also use slate from the Loire Valley in France, Cornwall in the southwest of England, and recently I used limestone from the Tuscan hills in Italy.

Stone is stone no matter where it comes from. I have a global, geological view of our world and do not lay import on the source of material in a national sense. When I use the term Scottish slate, it is merely offered as information. It is not imperative that my stone comes from Scotland; this is merely most convenient source. Although I have to say, Scottish slate, because of its ‘tormented’ past, exhibits a greater range of forms and colours than most other material that I have come across from elsewhere. 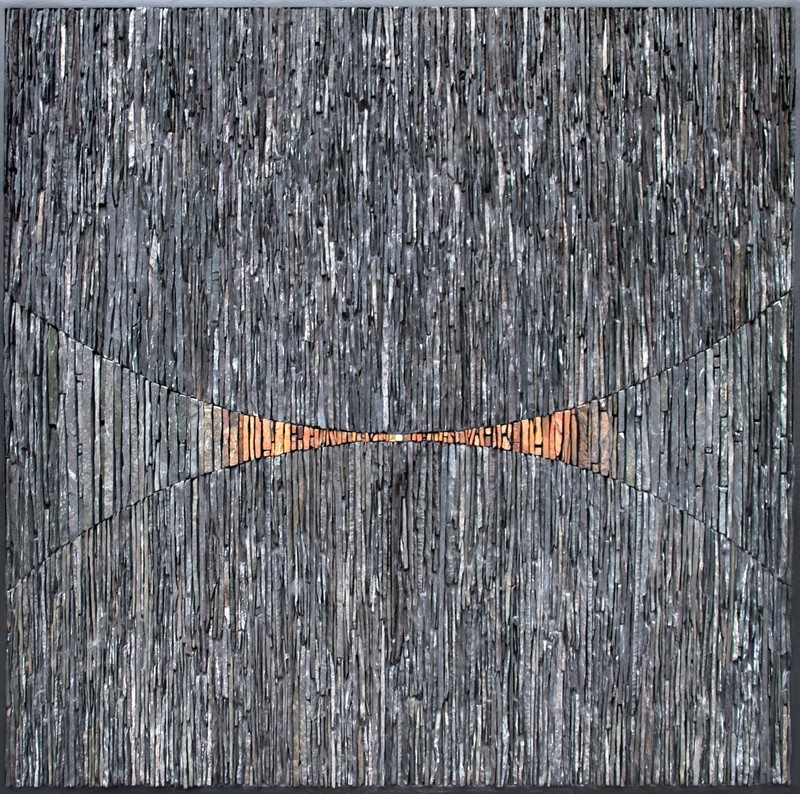 OPP: Works made from slate—like Anticline II and Xenolith (Moho)—have long, thin shards while works made from shale—Intrusion, for example—have more variety in the shapes of the tiles. Is this related to the nature of the materials? Or about how you exert force on them?

DM: Most of my work is executed in slate, but recently shale has been used in pieces such as Intrusion. These materials are worlds apart in terms of their qualities. The shale is extremely fragile and is often applied in wafer-thin pieces with the result that it is more difficult to exert control over it, but that is part of its charm. It does not respond well to the water-sluiced diamond saw I use to cut and control my slate shards and ‘fingers.’

The processes used in obtaining and shaping both types of stone differ considerably. Slate is sourced in disused quarries, taken home, split, then cut with a saw. Then it is washed, dried and sorted into different hues. Shards with rough edges are separated from the smooth because they are used to different effect. Shale, on the other hand, is sourced from the waste material of historic coal and oil shale mines in Central Scotland. It is not washed and saw cut. 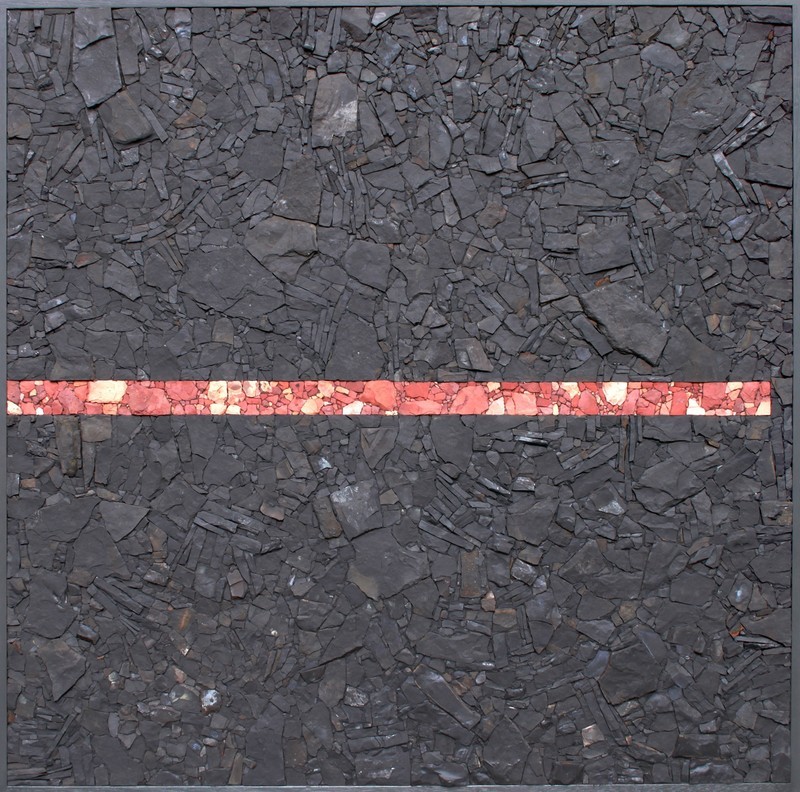 OPP: Generally, your color palate is limited by your material. Is this a challenge you work around or part of the reason you choose this material? When there is color, is it natural?

DM: I am drawn to natural processes; the geological phenomena that first fascinated me at a young age remain with me. All the colour is natural. I do not change it artificially (although on occasion in smaller works I rub graphite into the stone in order to create subtle contrasts).

Pieces such as Paleogene Swarm and Intrusion, both executed in shale, have a higher colour content than most of my work. Shales have a fairly consistent black colour, although oil shale that has been heated for extraction turns from black to various hues and shades of red. These processes 'control' my colour palette. In most cases, it is very limited, though the subtle variations of hues within the stone itself do play a significant role in creating an overall warmth to the work.

The colours of slate, on the other hand, range from almost black, through hues of greys, purples, greens and even a creamy dun. Colour is subordinate to the other inherent qualities found in slate. Loch Lomond Re-advance, for example, appears at first glance to have an overall grey tone. But on closer inspection, there are subtle changes in hues and shades. The subtle colours of the slate rely on texture, i.e. the way that light plays on the stone, especially in its rough, uncut edges. The viewer is forced engage closely with the artwork; the further one looks, the more colour is revealed. I also invite the viewers to touch the art, an act much frowned upon in most galleries. The audience can relate to my work both in a visual and in a tactile sense. 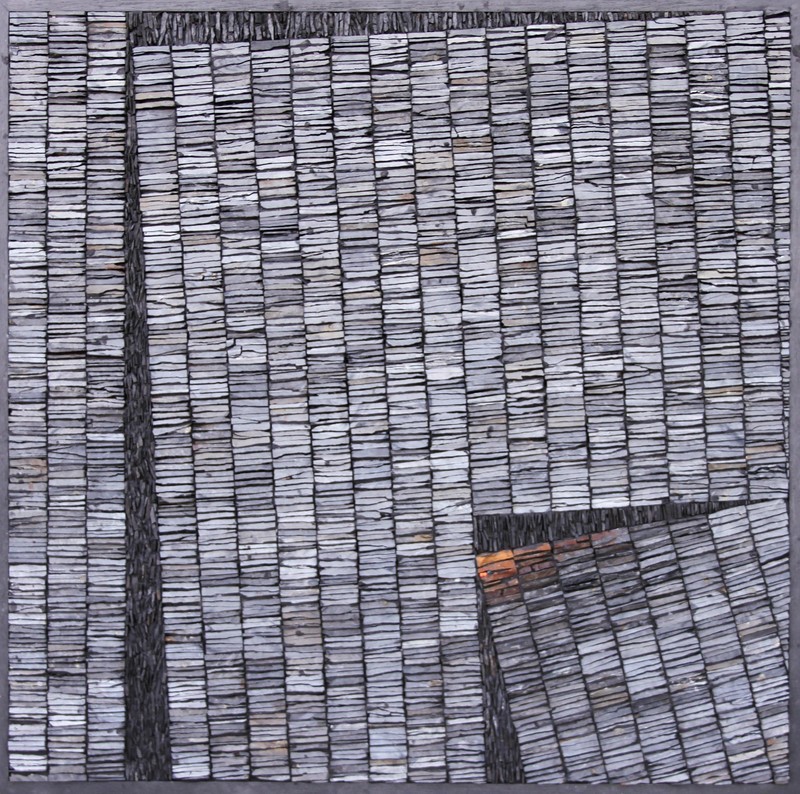 OPP: Would you pick a favorite piece in which you use color to express geological forces and talk more in depth about it?

DM: Tectonic Drift embodies the unimaginable geological forces beneath our feet and how these forces have shaped and continue to shape our planet. The colour red is associated with power. This piece employs the nuances of colour in the smooth cut edges and in the rough portions. Here the reds combine with the greys in a harmonious, perhaps a primordial way. Think about fire and charcoal, magma and black volcanic rock, even life and death.

A close study of the smooth pieces reveals also the unpredictable way slate fragments when split with mosaic nippers. This is part of the delight of working with such a stone. The colours of the smooth slate are not deliberately placed but are randomly selected. This is because the variations in hues and shades are not dramatically different, creating a unit when viewed from distance.

I use a small area of reds to suggest the furtive nature of tectonic forces, but colour does not exist in isolation. In expressing geological forces, form is essential. In Tectonic Drift, the use of simple disjointed shapes expresses the fractured and shifting nature of the earth's crust, that tenuous raft on which we exist. 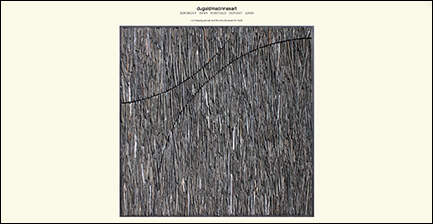