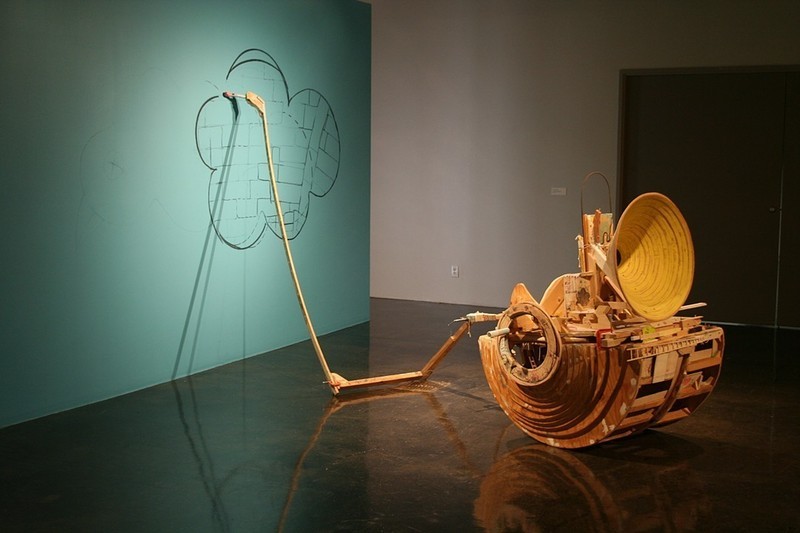 TRAVIS TOWNSEND’s large sculptural vessels appear to be part boat, part RV, part space ship, part ark. Tiny chairs and ladders occupy these vehicles, hinting at vague narratives of human cultures—past, present and future—in transition or possibly on the brink of extinction. Travis earned his BS from Kutztown University in Pennsylvania and his MFA from Virginia Commonwealth University. He received the Virginia A. Groot Foundation Sculpture Award in 2006, 2008 and 2009. His numerous solo exhibitions include shows at Southwest School of Art in San Antonio, Texas (2008), Manifest Gallery in Cincinnati (2012) and Washington State University (2014). As part of SmithTownsendCollaborative, he recently created a new installation with Brandon C. Smith titled view of the big nothing from an abandoned perch atop pink meat pod island (with Godbird watching) for the Lexington Art League’s Loudoun House. Travis teaches at Eastern Kentucky University and is represented by Ann Tower Gallery. An exhibition of Travis’ paintings will take place in Fall 2015 at the Living Arts and Science Center in Lexington, Kentucky, where he lives.

OtherPeoplesPixels: What came first for you: painting or sculpture?

Travis Townsend: I thought of myself predominately as a painter in high school and early college, but I’ve always made three-dimensional stuff. Looking back, the objects were always more interesting than the paintings. Throughout my first few years at Kutztown University, I thought sculpture was either boring, old statues or rusty chunks of big Modernist metal. It took me a while to realize that my woodworking/sculpture could be as weird and fun to make as the tree forts and skateboard ramps I built as a kid. I spent my last two years planted in the wood shop, making oddball furniture objects with heavily painted surfaces that I believed a wide range of viewers could understand, appreciate and live with. I sold a bunch right as I was graduating, so I thought I had it all figured out. Of course, then my work changed.

The paintings that came next had a strong resemblance to the surfaces of the furniture. Since graduate school at Virginia Commonwealth University, the creative process has become more evident in the finished paintings and sculptures. The more recent paintings are, to me, more interesting hung in clusters near the sculptures. I often think of them as some sort of information tablet that presents a layered history without ever really explaining it.

Since my first serious work began as furniture—albeit not in a traditional sense—the vessel has always been an appealing starting point for me in terms of form and potential meaning. Early on, the sculptures were more about what it meant to craft, and then re-create, objects that nostalgically relate to furniture objects, tools and toys that we live with. This series was called Rebuilt Domestic Devices. As the work shifted into a larger scale and began to look a bit like sad, homemade machines that were insufficient to do their tasks, the series became Renovated Flightless Devices. 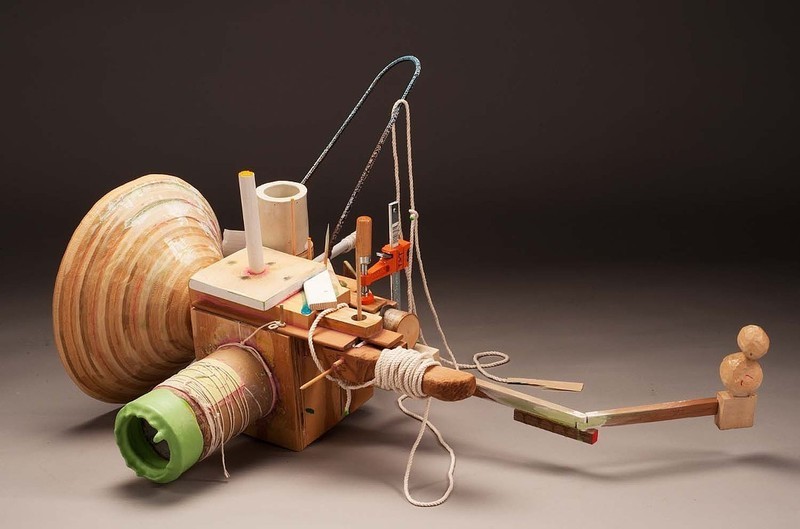 OPP: Could you talk about the relationship between the sculptures and the wall drawings in your solo show Anxious Accumulations (2008) at Southwest School of Art in San Antonio, Texas?

TT: That show was very important to me. It was a big space that needed some fairly sizable objects. I had previously made a contraption-like sculpture connected to a wall drawing, but this was the first time I changed wall colors and pedestal colors and drew on the walls. The pronounced use of string as a three-dimensional line was new, too.

The act of drawing is very important to the creation of my sculptures, which evolve from continually-accumulating small doodles. When complete, the sculptures are a bit "sketchy" in the sense that they might seem unfinished or in-progress. From the beginning, I drew and painted on the sculptures, but it took a while for me to feel confident putting images on the walls. Most of my three-dimensional work has a strong linear gesture. So, building on this already present "drawing" sensibility with string and charcoal on walls has been a good fit. My vocabulary of simple symbolic images became more distilled with this show. The image of the dead bird could stand in for innocence and the cartoony army tank could be brutish, clumsy violence. These images are usually secondary and play a supporting role to the sculptures, but that may change in the future. 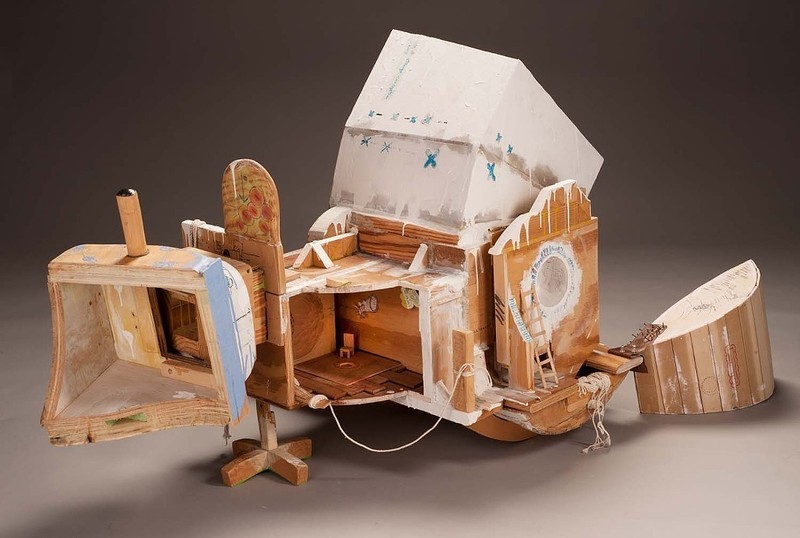 OPP: The lo-tech, DIY quality of your large sculptural vessels leads me to imagine large groups of people being forcefully exiled from their homelands. I think of diasporas in fictional outer space (the humans of Battlestar Galactica) and in history (the transatlantic slave trade). I also imagine the intentional exploration of new frontiers in history (colonial explorers) and in our contemporary world (Cuban immigrants crossing the Gulf Stream by boat). In all cases, these works evoke thoughts of the major upheaval of confronting the unknown. What narratives do you imagine for these vessels?

TT: Yes! Thanks for that. I appreciate hearing your ideas about what my work suggests. It is all of those things, without being any of those things specifically. I always hope that the layered possibilities become a jumping off point for viewers to fill in the narrative for themselves. There is more than one answer to the question of, So what does this mean?

The use of small boats, chairs, ladders, mini dwellings and the image of the dead bird is the most pronounced attempt at a narrative, however. I like the way these indicators of previous habitation change the associations of the larger vessel-like objects. From across the room, a viewer sees something that is human scale, but upon closer examination of the small built structures, docks, and flotilla of boats, one might start to think of the sculptures as massive arks for a possibly-extinct group of small people. What do the symbols suggest about the people who once inhabited the now-empty chairs? Did they build the boat-like contraptions? Did they abandon these vessels or did they die out? I keep thinking of those colossal heads on Easter Island and the abandoned cliff dwelling culture in the American Southwest. Also running through my mind are ideas about building machines we don't need, fouling up ourselves and others, then fleeing to start the whole process over again. Lately, some titles suggest this by using words like infected, abandoned and evacuation. Raft for __________  (with Infected Systems Drawing) does this most emphatically.

Randy Shull, one of my teachers at Penland, has made many works with a simple iconic chair-shape, and I've always loved Charles Simond's tiny, clay dwelling pieces. I probably wouldn't be creating the chairs and little clay bricks if had I never seen their work. Certain images stick with me for years before I see traces of their influence in what I'm making. 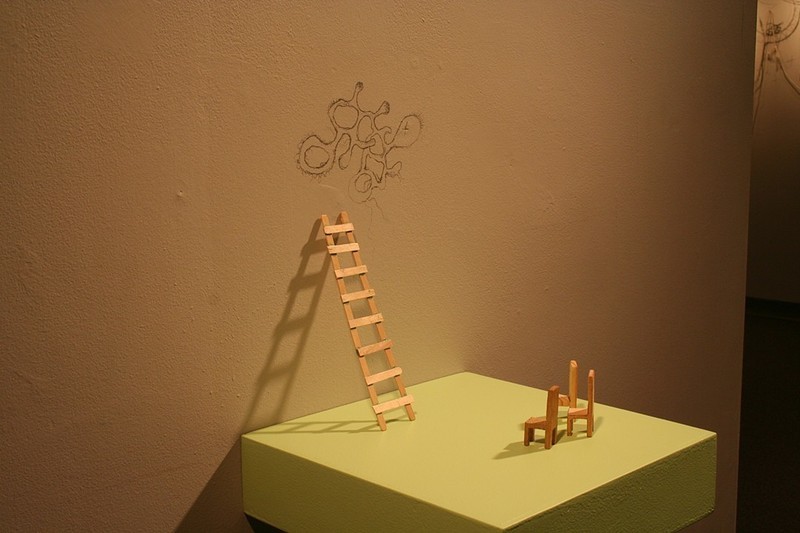 OPP: I'm curious about your choice of the word "renovated" to describe many of the pieces, as in Renovated Quarry Pot, Renovated TLC or the Renovated Flightless Devices. In what way are they renovated? What was their former state?

TT: The titles are mini artist statements that suggest the process and the type of object: toy, ark, tank, device, pot. The word renovated hints at a positive-sounding narrative of handmade improvements. I really do make and remake some of these things over and over again. But I also hope the viewer will wonder, why would someone keep "fixing" such useless-looking, slightly pathetic objects? A dominant theme in my work is the creative act of building itself. My studio practice is not unlike the tinkering of other middle-aged guys in their garages after their kids have gone to bed. Although, I was working this way long before I had a house with a garage. . . or three kids. 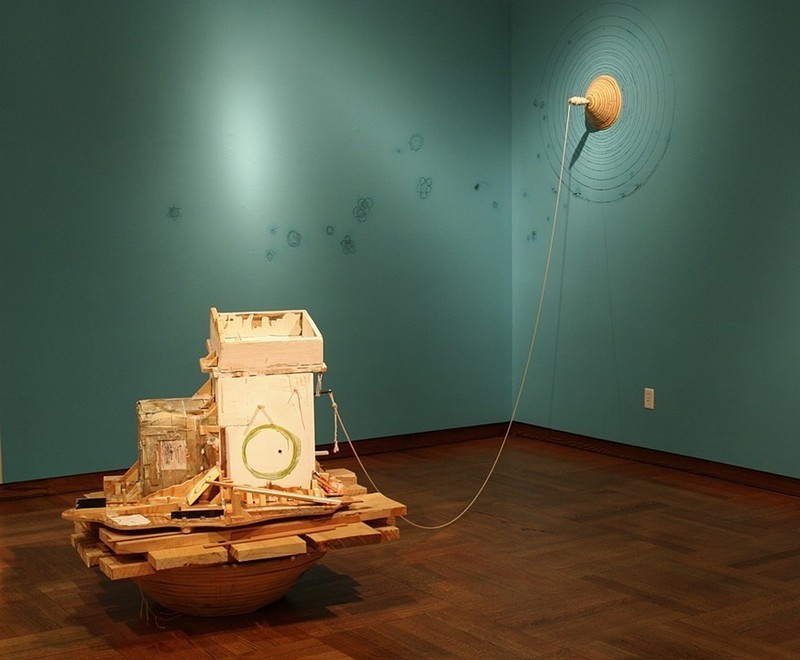 OPP: How has having kids changed your art practice or your art career?

TT: Time in the studio is much more precious. I don't waste as much time as I used to! My wife, Felicia Szorad, would probably say the same about her own studio activity. Our twin daughters are three, and our son is six. We recently purchased a home that needed renovations, so we've been extra busy these last few years. Gradually we’ll be able to get more studio time as they get a little older. Professional decisions are different now, since certain opportunities for exhibitions, residencies or teaching could disrupt the entire family. I concentrate on what I really want/need to do, rather than applying for or agreeing to whatever sounds interesting.

Building an O gauge train layout bookshelf for my kids has been a surprisingly arty experience, so the line between it and my sculptures could get pretty vague. Would it be too dopey—or awesome—if model trains started popping up in my sculptures? 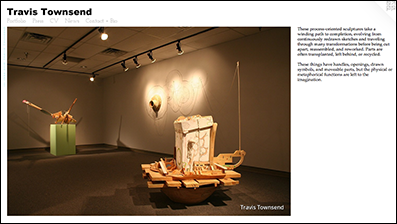