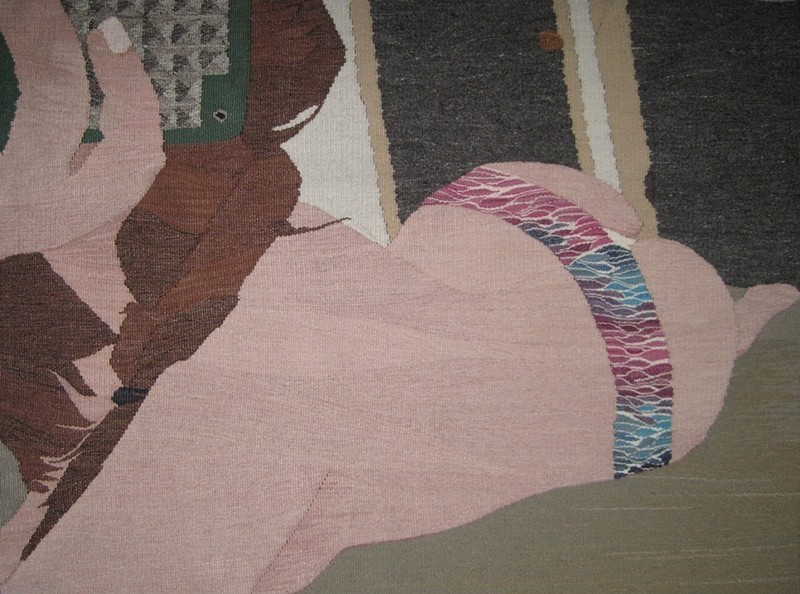 ERIN M. RILEY's tapestry weavings of faceless, female figures feel profoundly relevant at a moment in time when the Internet, Instagram and image-sharing apps like Snapchat are changing the way we relate to our own bodies and the bodies of others. Issues of agency, consent and sexuality, especially as they relate to female bodies, are represented in her weavings, which include numerous selfies (complete with smartphone in the frame), the private, sexy pics one chooses to send to a lover and post-party candids of drunk coeds who may not know they are being photographed at all. Erin earned her BFA from the Massachusetts College of Art and Design (2007) and her MFA from Tyler School of Art (2009). She has been a recipient of a Kittredge Foundaton Grant (2011), a full fellowship to Vermont Studio Center (2011) and a Ruth and Harold Chenven Foundation Grant (2012). She has an upcoming solo exhibition at Soze Gallery in Los Angeles in March 2015, and her work is on view now through November 22, 2014 in the group exhibition Narcissism and The Self-Portrait at Ann Street Gallery in Newburgh, New York. Check out the shop section of her website to purchase limited edition, jacquard woven selfies. Erin lives and works in Brooklyn, New York.

OtherPeoplesPixels: For our readers who don't know anything about weaving as a process, can you explain how tapestry weaving is different from weaving patterned fabric? About how long does an average piece take, including the warping of the loom?

Erin M. Riley: Pattern fabric weaving utilizes the technology of the loom, using a combination of threading and what's called tie-up. Pattern weaving results in an image produced by the combination of the warp (vertical threads) and the weft (horizontal threads). Tapestry weaving is a weft-faced weave; the aim is to completely hide the warp. Tapestries are traditionally woven on a high warp or vertical warp loom. But I use a floor loom with a cartoon or drawing behind my warp that acts as a guide while I weave. My pieces take approximately 100 hours to complete including threading, loom setup and finishing techniques. 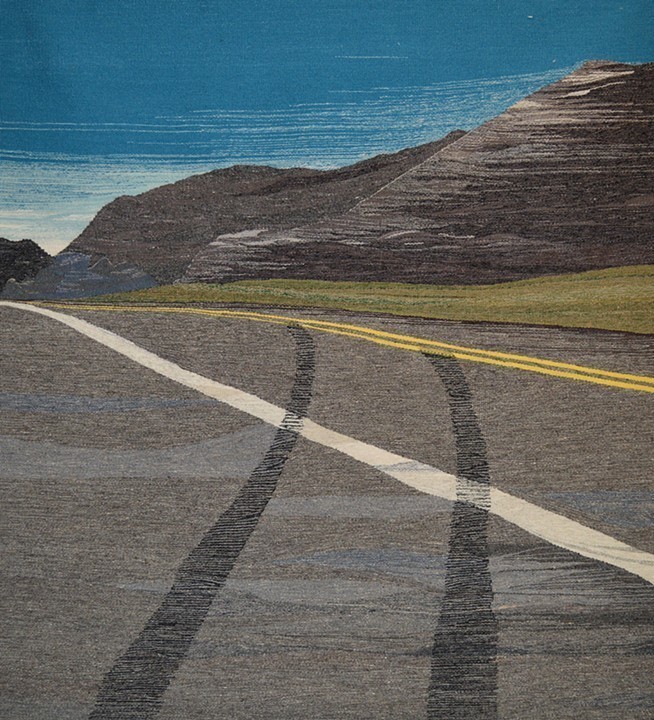 OPP: Tapestry weaving has historically been used for portraying such lofty subjects as saints and the aristocracy. It was more common in earlier eras when there was no other way to capture and commemorate individuals and events. How does your work based mostly on images appropriated from Facebook, Instagram and Snapchat fit into this history?

EMR: I've never actually used snapchat because the images disappear. I often refer to my images as being the ones that are NOW being sent through snapchat. They are the ones people don't want screen shots taken of. But yes, tapestry is a labor intensive medium, traditionally expensive and fancy. I liked the idea that I could commemorate women. So many times, I've taken a bunch of images—made sure my hair and body looked good, adjusted the lighting and background—and sent. . .  And then the dude ask for more. Send more! Show me more! With my tapestry weaving, I'm spending the time with each image, pouring over each moment and making it real.

OPP: Why no images of men and boys? They post just as many selfies and party photos, right?

EMR: Right! But it's slightly different, and also I'm not a guy. I don't see myself in the images of dudes. I also constantly think about the images women take for men versus the images men would request. I think they are very different. This is represented in men as well. I find men are often showing me something in images that I don't want to see. Flexing, showing their package, making a strange face or offering a straight-up boner pic. I might one day weave some dudes. . . when I'm ready! 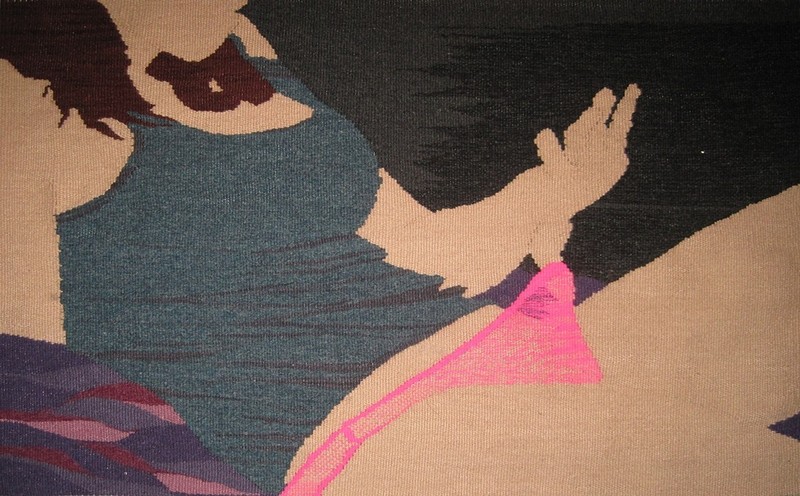 OPP: I see several distinct categories of image in your figurative work. There are the selfies, which always have the smartphone present in the frame. Then there are pieces like It All Started with the Webcam (2014), Peek (2013) and Freshly Shaven (2011), which feel more intimate like images sent privately to a lover. And finally, the post-party images like Drunk Girl (2011), Spit Up (2013), Fun (2013) and Passed Out (2011). These make me uncomfortable—not your recreation of them, but the existence of the original images posted somewhere, possibly without each girl's consent. Could you talk about agency and image making?

EMR: Yes, the images that are clearly taken by the women with phones are sexy, confronting, personal and in control. I'm interested in how these images end up on the internet for so many to see. My softer side is represented when I am seeing the simple objective beauty of a woman, and while there might be beauty, it's not raunchy or suggestive. Nudes like Peek are a presentation of the body: it's alluring, but it's also simply beautiful.

The images where the role of the camera is questioned interest me greatly. They speak of the issues of ownership, exploitation, the role of the internet in our personal lives, respect for women and/or helpless passed out people. These images tend to evoke ideas of woman as victim. There is a pervasive mentality that girls who wear skimpy clothing are putting themselves in dangerous positions, causing them to be date raped, violated, photographed without their permission. People blame the victim rather than the violators. This is a common theme in Jessica Valenti's book The Purity Myth. The myth is that girls can't possibly be in charge of their own sexuality (i.e. dress sexy without reaping the consequences). Shaming them keeps them from coming forward when violated because they assume it's their fault or they don't want to be labeled as sluts because then no one would respect them. Obviously women are victims in many situations, but the power is infinitely greater with sex crimes because of the societal ideal that a woman stay pure. 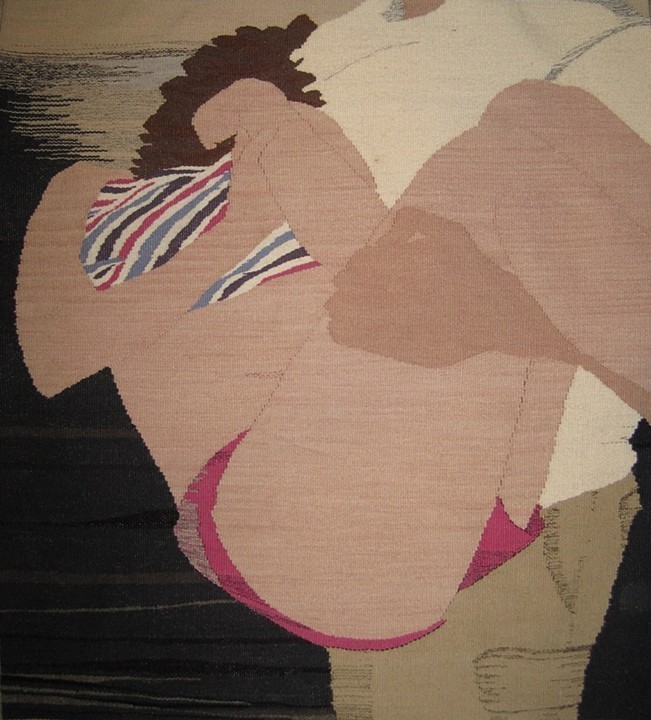 OPP: Passed Out (2011) is particularly interesting to me because of its ambiguity: the male figure could be putting his drunk friend to bed or he could be a stranger taking her somewhere to rape her. Either way, the posting of her image without her consent seems like a violation to me. I was out of college before the internet and texting and phones with cameras, so all this sharing always strikes me as extreme, not because of any moralizing stance on sexuality, nudity or exhibitionism, but because I relate to privacy differently. Do you generally get different responses from viewers of different generations?

EMR: Yes, this is a violation and one that has huge consequences in the realm of emotional and future physical distress. This image just doesn't address that to me personally. Different generations view these images in vastly different ways. College age adults hardly bat an eye, and older generations are quite shocked. I'm pretty sure the issue is the nudity, I have never heard them talk about the privacy. Maybe they are shocked that this content is readily available online.

OPP: Could you talk about your choice to render the figures in your tapestries faceless?

EMR: I feel like women in today's culture are constantly comparing themselves to each other, one-uping or belittling. I never related to other girls as a teen and kind of prided myself in girl hate, but hating girls is such a misguided use of insecurities. We all go through so many similar biological, mental, human experiences. It's so counterproductive to not understand how similar we actually are on a base level. I am all the girls I weave, and they are all each other. By being no specific girl, we are all copping to wanting to be sexy and be taken seriously.

OPP: I thought the facelessness was a way to protect the privacy of these women while talking about the way they put themselves out in the world. Either way, a side effect is that the figures show no emotional expression about what is happening with their bodies, even when they are in control.

EMR: It is in part to make the images anonymous—I remove tattoos and other identifying characteristics—but also to make it more universally relatable. Since I know how each woman looks in the source image, I try to express what she is expressing: boredom, happiness, excitement, desperation, etc. 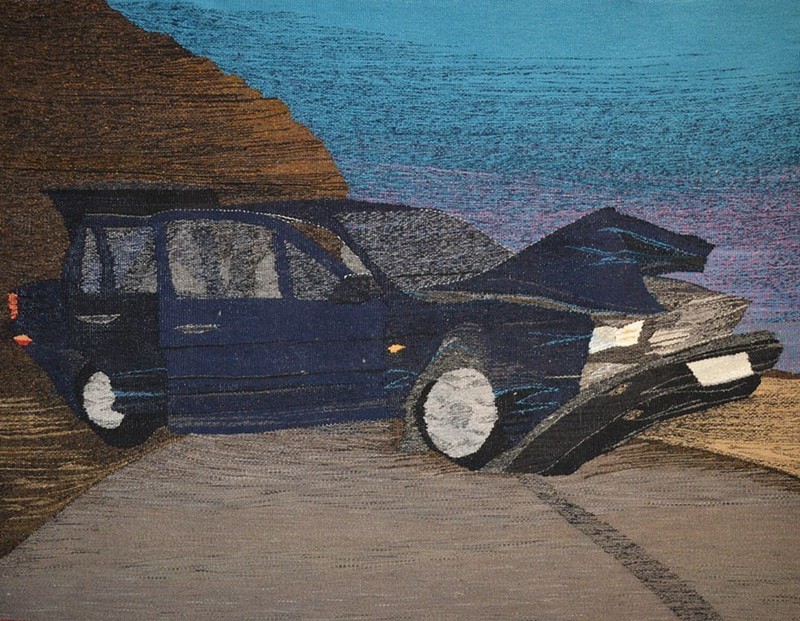 OPP: Alongside your female nude tapestries, which have received the most press, you have been weaving car crashes and highway skid marks since 2010. These tapestries, which touch on trauma and mortality, frame the way I read the nudes and the contemporary cultural phenomena of the selfie, which didn't exist when I was a teenager. I think selfless reveal a kind of unconscious, pervasive fear of death. . . almost as if to say, Let me make sure that I exist now and that no one will forget me by repeatedly documenting my own visage. Have you exhibited these works together? Do you see these bodies of work as connected?

EMR: I couldn't agree more with your reading of selfies, there is something so un-real about our daily existences that we have to reiterate these ideas again and again. I have exhibited this work together, although it's generally broken apart due to a gallery's interest in one line of content. But it all stems from the same narrative. I initially started looking at the behaviors of young people because I was researching the after effects of experiencing traumatic events like death or substance abuse consequences at an early age. I think it's best when they are shown together because while the figures might reveal a young woman's personal behavior, the car wrecks and skid marks are what might have came before or after. It's all life. 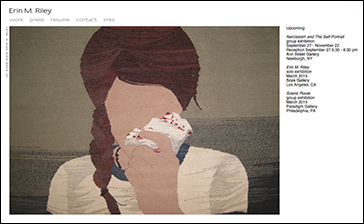 To view more of Erin's work, please visit erinmriley.com.Featured Artist Interviews are conducted by Chicago-based, interdisciplinary artist Stacia Yeapanis. When she’s not writing for OPP, Stacia explores the relationship between repetition, desire and impermanence in cross-stitch embroideries, remix video, collage and impermanent installations. She is an instructor in the Department of Fiber and Material Studies at The School of the Art Institute of Chicago, where received her MFA in 2006, and was a 2012-2013 Mentor-in-Residence at BOLT in Chicago. Recent solo exhibitions include I Still Haven’t Found What I’m Looking For (2013) at Klemm Gallery, Siena Heights University (Adrian, Michigan) and Everything You Need is Already Here (2014) at Heaven Gallery in Chicago. Here|Now, a two-person exhibition curated by MK Meador and also featuring the work of Jason Uriah White, is on view at Design Cloud in Chicago from July 25 - October, 24, 2014. Beginning on November 7, 2014, Stacia will improvise When Things Fall Apart, an ongoing, collage installation in the Lillstreet Annex Gallery. Closing reception guests will be invited to help break down the piece by pulling pins out of the wall on December 5, 2014.