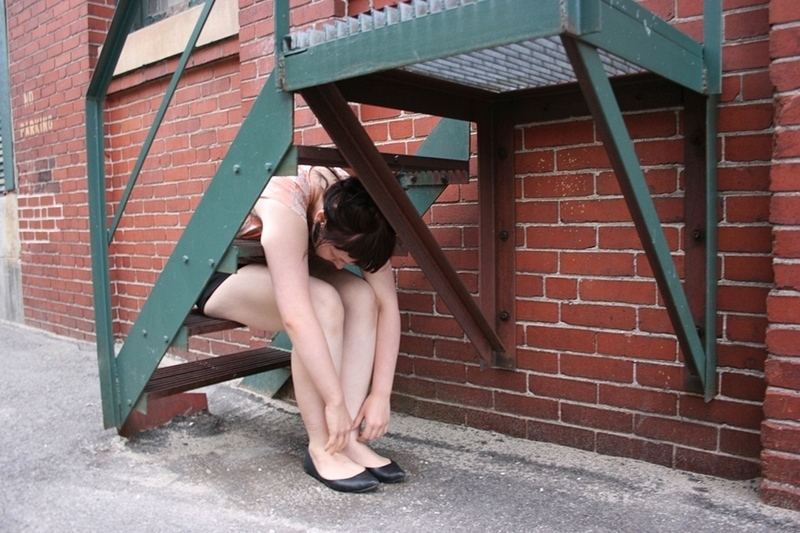 Performance artist, writer and independent curator SANDRINE SCHAEFER literally and figuratively explores the concept and experience of fitting in. Their site-sensitive live actions in public space offer the opportunity to contemplate the relationship of our bodies to time and space. In 2004, Sandrine co-founded The Present Tense, dedicated to the presentation and preservation of live action art in transient spaces. In 2012, they were a recipient of The Tanne Foundation Award for artistic excellence. Their curatorial project ACCUMULATION is on view through March 26, 2014 at Boston University’s 808 Gallery in conjunction with the group exhibition The Lightning Speed of The Present. Sandrine lives and works in Boston.

OtherPeoplesPixels: You use the term "site-sensitive" instead of the more prevalent "site-specific" when referring to your performances. Could you clarify the difference?

Sandrine Schaefer: Working site-sensitively requires an artist to surrender to the present moment and accept all of the chance encounters that come along with making work for a specific environment in real time. Site-specific work can do this too, but this it isn’t a requirement.

Organico (2012) An infiltration into a trash can in Mexico City. Duration: 57 minutes

OPP: In 2012, you spent time in Mexico and did a series of durational live actions in public space—including Ascensions, Fusions and Illusions—that grew out of your 2009 project Adventures in Being (small), which was a literal and figurative exploration of the theme of fitting in. How were the performances in Mexico an extension of that earlier project? What was different? How did time factor into these projects?

SS: When I began working on Being (small), I was measuring my body by infiltrating a wide array spaces and was not too discriminating about what those spaces were. If I thought I could fit some part of my body into a space, I would try. In the early work, I was interested in the accumulation of the project. There are two rules for Being (small): I enter the space the way that I find it, and I stay (often in sustained stillness) for as long as my body or the space allows. My intention was to work similarly in Mexico, but there were many historical and environmental elements that insisted on becoming part of the work.

My first destination was Puebla, a place that is known for its cathedrals. Locals kept telling me that these cathedrals were “built on the backs” of the indigenous communities. It is said that the indigenous people built idols of their own deities into the churches in Puebla. When forced to pray to the saints, they were actually praying to something they believed in. I appreciated the rebellion of this story, and I found the notion of a hidden history kept alive through memory inspiring. It made me reconsider the notion of “smallness” and “being.” 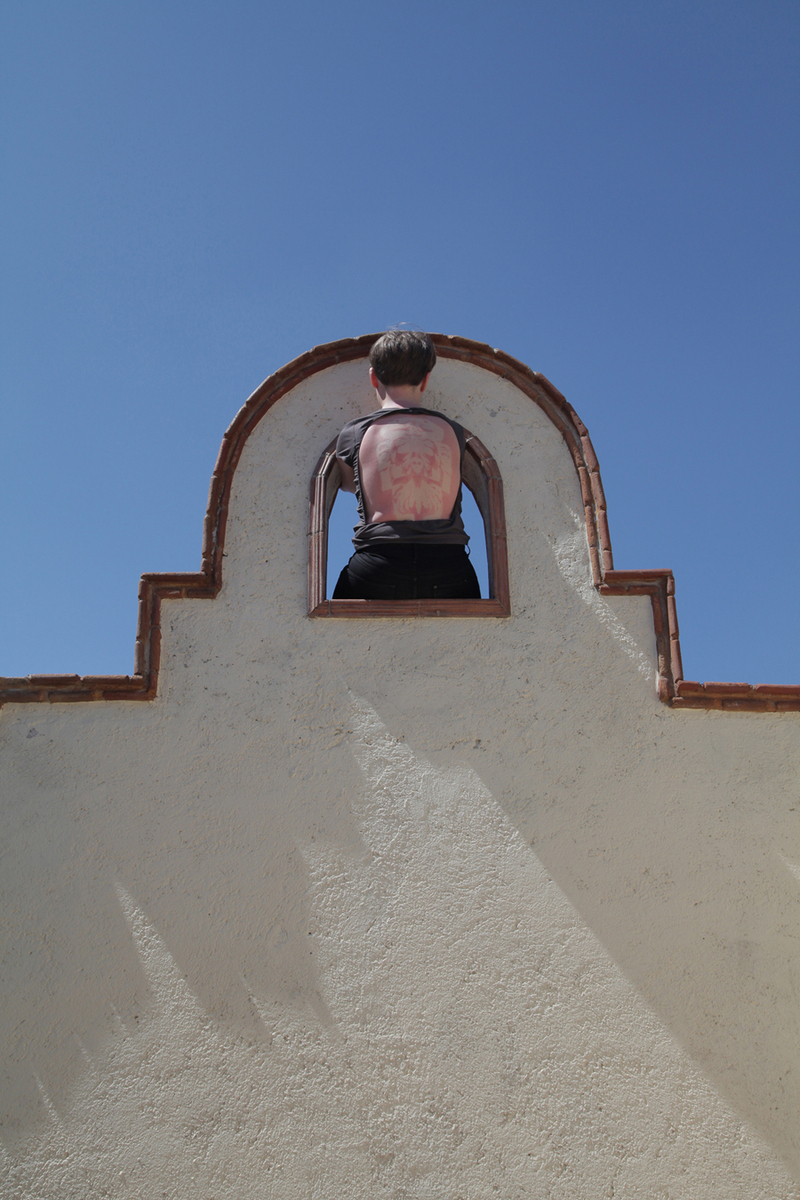 OPP: What other unexpected factors changed the work?

SS: The sun has a presence throughout Mexico that I had never experienced before. It’s no wonder why early civilizations were influenced by the cycles of the sun! It had a profound effect on my body and impacted my internal clock. The work became shorter because I had to be very specific about what times of the day I was outside. I had to move at a different pace while in the sun. I wanted to actively incorporate these limitations into the work, rather than allowing them to be passive byproducts, so I started researching.

I found that before Puebla was called Puebla, the Aztecs named it Cuetlaxcoapan, which means "where the serpents shed their skin.” I began engaging in sun rituals where I sunburned the image of Coatlicue, an Aztec serpent goddess, onto my back. I then sought out places of tension throughout Puebla: places where ruins had been built over or where buildings with different architectural styles touched. As I fit my body into these spaces, I simultaneously placed this (literally) fading historic icon into contemporary situations.

As I continued my travels, I chose images relevant to the history of other locations throughout Mexico. In Oaxaca, I burned a Zapotec huipil onto my chest. In Mexico City, I burned an image designed from ruins I studied at Monte Alban onto my stomach. There was something powerful about wearing the traces of one place and bringing them into another. Histories travel through us. 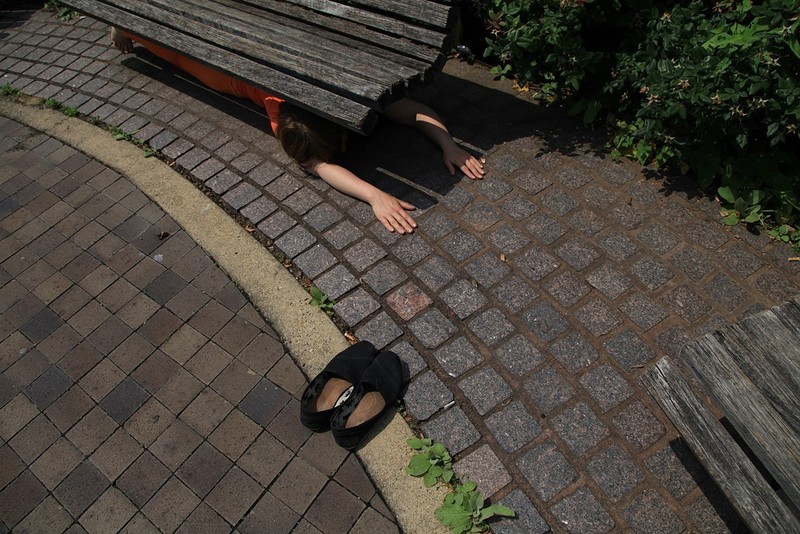 OPP: How does the presence of a camera, used to document your performances, affect the performances themselves?

SS: While working on Being (small), I started to view the camera as a collaborator. Although the actions I performed were rather benign, being still in public spaces can cause concern. This is intensified because of my perceived gender. The goal in all of my work is to create a pause for my audience. . . a chance encounter that inspires a shift in their perceptions about how we interact with our environment. The presence of a camera gives people permission to look. I’ve found that the more professional the camera looks, the less anxiety the encounter induces. The audience is usually more willing to engage. Being (small) intentionally has two different audiences: those who encounter the work in the present moment and those who encounter it through its documentation. But is the “art” in the live act, the photograph or video or both? This is slippery territory that performance artists of our time are navigating in different ways. For me, the art is the live act, but I also see the artistic value of the documents themselves. 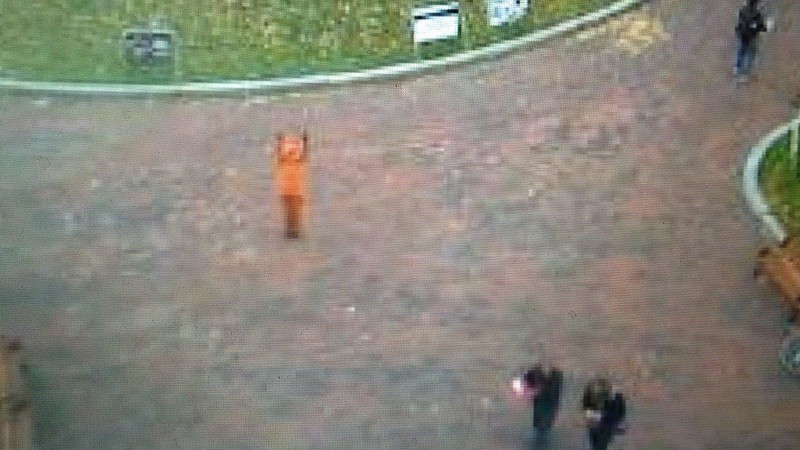 OPP: That brings to mind recent pieces like Mirror Stage (2013) and For You. . . and anyone else who might be watching (2013), that include video-sharing technologies like the iPhone and live-cam on the Internet as integral ways for viewers to experience live actions. How have these technologies changed your work? Do you think they are changing the nature of performance art in general?

SS: Living in an increasingly documented society, it is impossible not to consider the potential and the limitations of these technologies. I certainly think that technology is changing spectatorship of performance art. These technologies are amazing in the sense that we can connect easily—almost instantly—and see documentation from pieces that might be impossible to witness live. However, no matter how thorough, documentation is not a substitute for the live piece. In Mirror Stage and For You. . . and anyone else who might be watching, I use contemporary technologies to intentionally fragment the experience of the performance in order to inspire an active dialogue about the tensions around the act of witnessing in the 21st century.

I often work with the idea of breaking the traditional performance space by rewarding the curious viewer. This is expressed through small details that can only be experienced at a close proximately. In both Mirror Stage and For You. . . and anyone else who might be watching, I found that viewers are willing to engage a bit more intimately than in some of my other work. Perhaps the mediation of an interface reads as an invitation to interact.

OPP: For you, is documentation of live performance a problem to be solved or a creative opportunity?

SS: Both. As an independent curator and archivist of performance art, I am always thinking about this. False Summit (phase 2), my collaborative project with Phil Fryer, revolved around the idea of archiving through the body and memory. There are many artists that are doing interesting work with archiving and alternative strategies for documentation. Jamie McMurry, Boris Nieslony, Márcio Carvalho and Shannon Cochrane are just a few.

My curatorial project ACCUMULATION explores documentation of art action through objects. Over the duration of this exhibition, participating artists are given one day to create a live-art piece. All evidence from their actions is left behind, challenging the following artists to incorporate these remnants into their own work. Any materials that come into the space must remain until the exhibition closes. ACCUMULATION challenges ideas about artist collaboration and simultaneously creates an innovative exhibition of experiential art documentation. This has been generative for me.

OPP: What is The Present Tense?

SS: In 2003, action art experienced a resurgence in Boston. Inspired by the explosive movement happening around us, Phil Fryer and I created The Present Tense in 2004. It started out as an initiative that organized and produced live art events and exchanges, but quickly grew into much more. We believe that art is an access point for growth. To date, we have organized and curated dozens of art events, festivals (including the Contaminate Festival), artist exchanges and exhibitions. In 2009, we co-founded the late MEME Gallery in Cambridge, Massachusetts. We have shown over 300 artists from across the globe, accumulating footage and relics from performances. We wanted to share this further, so The Present Tense launched an online archive in 2009. The goal of this living archive is to provide a permanent presence for ephemeral art that has difficulty finding space to be seen. The Present Tense challenges cultural perceptions of what art can be through its commitment to curating this often misunderstood art form.

We are celebrating our tenth birthday later this year, so Phil and I are also using this time to reflect and explore what the future of The Present Tense might look like. In 2014, the archive will include never-before-seen footage, posts by guest writers, a series of posts with the theme "Family" and artist accounts of performances that have had no witnesses. 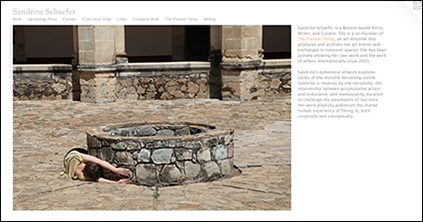