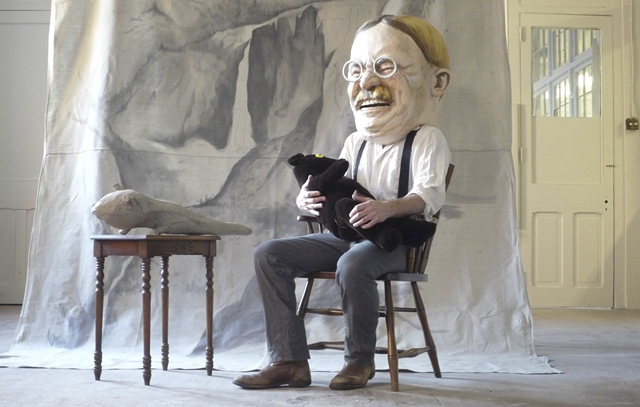 Speak Softly and Carry a Big Stick
Video Still of performance
2011RYAN WILSON KELLY references iconic figures from history, pop culture and myth in his allegorical performances and videos. Hand-made props and sets feature prominently, often adding humor and humility to his exploration of the solitary figure engaged with his own existence through creative labor. Kelly teaches at both the community and collegiate level and is also involved with several puppet theaters and theatrical prop construction for low budget films. He lives in Philadelphia, PA.OtherPeoplesPixels: You have both a BFA and an MFA in Ceramics. How did you end up working more in video and performance with an emphasis on costumes?Ryan Wilson Kelly: This is kind of a curious path, I know. I think I fell in love with all of the process and the challenge of mastering such a demanding material. It demands a strong work ethic, which meant that I was surrounded by other dedicated people. I fell in love with the huge history of this material and how it really mirrors the history of human development and technological advancement. Its stigma as a “craft” media and association with the decorative arts also fed my interest in alternative histories or lesser-known historical narratives.

But making static objects has always left me dissatisfied. Even in undergrad, I was creating interactive and kinetic pieces. I just don’t like it when things are done.

In grad school I think the box was a bit too confining, and I was encouraged to choose the material that was appropriate to the idea, not force the idea into the material. This was very liberating. By incorporating other materials I felt that I was only using clay where it was most needed and hence more valuable to the idea as a whole. I should say that I was (and still am) using large quantities of clay to sculpt heads and props that I then make a paper mâché shell of. So clay is still an essential part of my process.

Making things that looked like props led very quickly to me using them as props and now to my developing interest in performance and video. 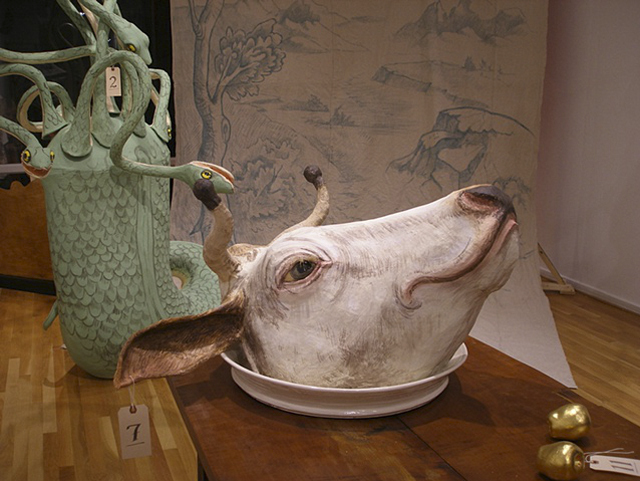 The Clay Studio, show of props
2008
Installation shotOPP: The props and sets for your performances are well-crafted and wonderful as objects by themselves, as you showed when you exhibited the props for Herculean: On Artistic Labor at The Clay Studio in 2008. Can you explain the balance of time between creating the props and sets, conceiving of the performances and actually performing? What’s the most pleasurable part of your practice?RWK: Its hard to say how much time I spend researching. My diet of media, books, film and image research are as much a form of entertainment as they are formal inquiry. A film I may have casually seen five years ago or a short story I read on vacation may suddenly click as a visual or narrative reference that needs to be reinvestigated.  Certainly when I fixate on an idea for a project, I try to immerse myself in the subject through reading and watching films, but I’m not an academic. I have the freedom to be a bit loose with the details or to mix my metaphors to reach an artistic end.I think the making of objects is the most time consuming but still the most pleasurable part of my practice. I am never as fully engaged as when I am in the throes of a project, working on five different things simultaneously, painting a backdrop, sewing a costume while the paper mâché dries, painting and re-painting, building props out of wood, carving foam etc.  I used to have the feeling that after making an object, no matter how long it took, when I was finished, the object was dead to me. I think that, in some way, by creating objects that are meant to be performed with, I’m holding them in this creative suspended animation. The creative energy still lives with the objects for me when I’m performing with them. 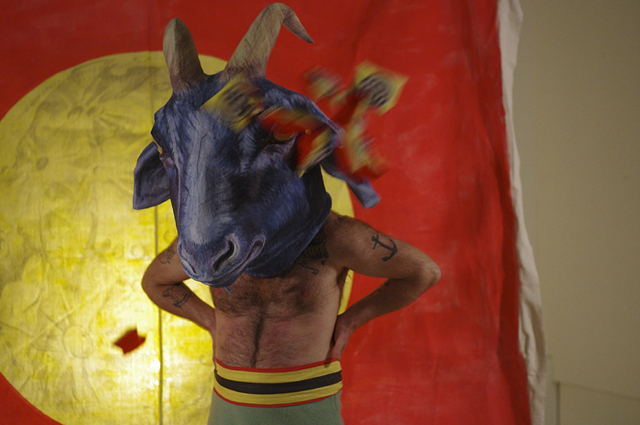 Let me be your scapegoat
2012
Documentation of performanceOPP: Many of your costumes are huge heads that make the performer look like a pez dispenser, creating a comic sense of inflated self-importance (or inflated cultural importance?) for the figures represented. It doesn't seem to be a jab at the actual people (or animals, in some cases), but rather at our collective relationship to them or to the ideas they represent. Response to my read? RWK: I think you’ve got it with your parenthetical “inflated cultural importance”.  Wherever I use the oversized head in my work, it is more my intention to visually emphasize their significance, to increase scale so as to increase the sense of significance. I know the awkwardness of the scale can be seen as humorous, but I hope that it acts more as part of the visual welcome wagon, an entry point rather than a diminution of the subject through humor.I should say that this is also coming out of a love of objects that I’ve seen: old masks, puppets, carnival costumes and paraphernalia from old pageants and political campaigns. By making things that are informed by these references, I hope that they carry some of the spirit of them, too. 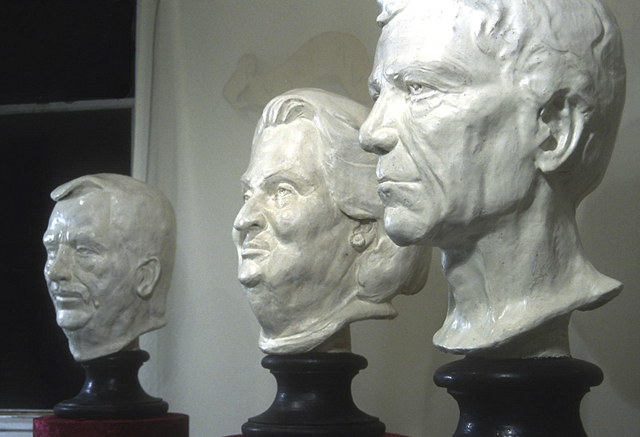 A Congregation of Loose Associations
2005
Detail of the three celebrated figures, Vaclav Havel, Madeleine Albright and Lou Reed Earthenware with encaustic wax on crushed velvet pedestalsOPP: What are the heads made of? RWK: My process for making the heads is still linked to my training in ceramics. I start with a plaster “dummy head” and add onto that with clay, fleshing out the features. Once the sculpting is done, I cover the clay in plastic and then in several layers of paper mâché. Once this shell of paper mâché has dried, I cut it off the original form.  These sections then need to be reattached, repaired and painted. This leaves me with a relatively lightweight and durable version of the clay original.  OPP: Talk about the aspect of your work where other people are wearing the heads, not just you. Is it important to have viewers interact with the heads? RWK: It varies from piece to piece. I do value the activation of my work, though I don’t always engage my audience with direct physical interaction with the pieces. I think it is entirely dependent on the idea. But wherever possible I like there to be some souvenir element or physical interaction to reward and engage the viewers. 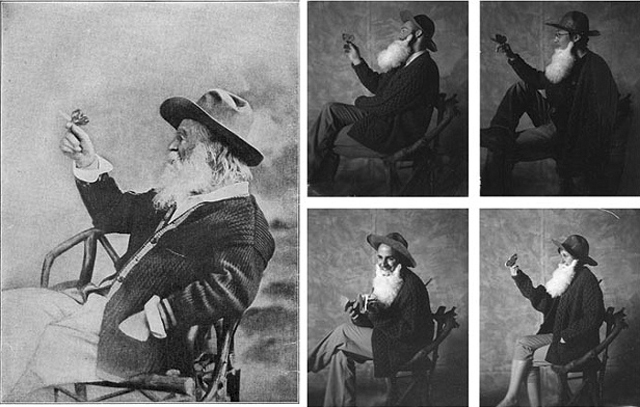 Souvenir polaroids in the image of Whitman
2008
Souvenir polaroid photography courtesy Francis SchanbergerOPP: I've noticed that your performances often revolve around hyper-masculine icons from history, myth and pop culture. Superman, Teddy Roosevelt, Walt Whitman, and Hercules are a few. RWK: It makes me laugh to think of Walt Whitman as a hyper-masculine icon. Perhaps through the virility of his poetry and the awesomeness of his beard he could be grouped this way. Let me say that the fact that my references are all male stems from my knowledge that I am usually the one acting out the character. Even though me dressing up as Teddy Roosevelt is as much a form of Drag as anything else, I feel like I can more convincingly pull these characters off. I am also gay, and I think that many of my choices represent a type of masculine identity that I am drawn to and aspire to.

What I would add to your observation is that each of them is singular or solitary or were seen as acting without the help of others. They are each engaged in some sort of heroic or exalted labor or pursuit that is to varying degrees an allegory for my own artistic labor. And yes, my use of them is not meant to be a direct association of myself with them, but rather they are allegories for what I am striving toward. OPP: That’s actually closer to what I meant. I should clarify. I see the traditional literary hero as a particularly masculine construction. When I say that, I’m not talking about biological gender; I’m talking about the collective cultural associations with gender. By hyper-masculine, I was referring to the qualities associated with the traditional hero, the qualities you mention. Solitary, engaged in exalted labor, acting without help: that’s definitely Whitman. I love that you say performing these characters is a form of Drag, because Drag is about performing gender and the collective cultural associations with gender. There is an inherent critique of those associations in Drag, as much as there is pleasure and humor and an engagement with those associations. It seems that the nuance of your performances revolves around this paradox: that you are both critiquing and aspiring to these qualities.
Fortress of Solitude
Performed in september of 2009 at Allegheny College's "8 hour projects"OPP: Could you pick your favorite piece that functions as an allegory and break it down for us? RWK: The piece that I made for the Eastern State Penitentiary, Crusoe’s Cave, is a favorite of mine. For this project I was invited to make a piece specific to the space, an early 19th century prison designed on the Quaker principle of penitence through solitary confinement. The environment itself was so loaded and fit so well with the idea that it had an amplifying effect on the piece as a whole. What’s even more is that I am distantly related to Alexander Selkirk, the marooned sailor whose real life story inspired Daniel Defoe’s work of fiction.For this piece I made a costume and props to turn the already cave-like, crumbling prison cell into a tableaux of Robinson Crusoe’s domestic life. I recreated the many handicrafts described in the book. Through this process and through my research, it seemed that the mastering of these crafts served to keep at bay the gnawing existential doubt that he would ever be rescued. This satisfied my over-arching theme of the solitary figure engaged in labor, but also drew a correlation between Crusoe’s labor and the activities and those of the former inmates of this cell. 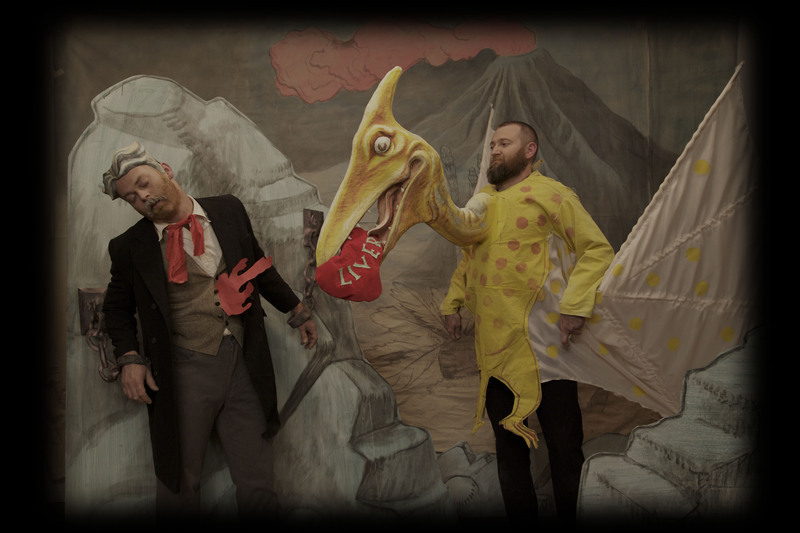 The Sleep of Reason Produces Monsters
2012
Documentation of performanceOPP: What are you working on right now? RWK: I am currently working day and night to finish props for a show opening May 4th at Napoleon Gallery in Philadelphia. The theme I’m working with here is the 19th century paleontologist Edward Drinker Cope who lived most of his life in Philadelphia (where I now live). Cope was famously one of the two chief participants in what is referred to as the “Bone Wars.” He and his rival competed to unearth, catalogue and name more extinct creatures than the other. I am focusing here on the end of Cope’s life, where he died alone and broke in a crowded row-house in Philadelphia, piled high with papers and specimens, plagued by nightmares and fever dreams that he was being eaten alive by dinosaurs. For the performance, I’m turning the gallery into a tableaux of his crowded study. I will cycle between examining and documenting specimens and throwing myself on a cot to cue a projection of his fever dream. In the image above, dressed as Cope, I am shackled to a mountain top where a Pterodactyl comes down and eats my liver, a direct reference to the Prometheus myth. 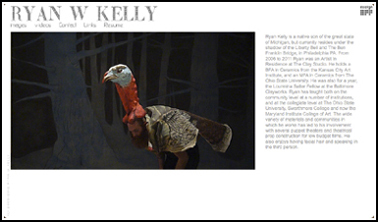