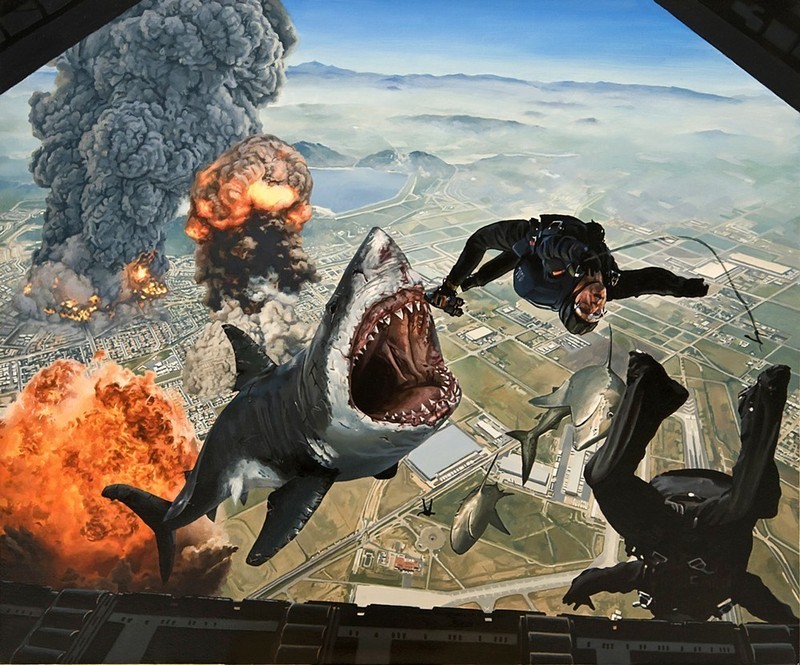 Monstrously-large praying mantises, open-mouthed sharks hurling through the sky and docile, gigantic otters populate the allegorical paintings of CALEB BROWN. Influenced equally by the visual vernacular of internet meme culture, Creature Feature films and classical Flemish painting, his "ridiculous and implausible scenarios" reflect anxieties of contemporary life surrounding economic and environmental change, the mass media and the relationship between humans and animals. Caleb earned his BA from the University of Puget Sound (Tacoma, Washington) and MFA from Boston University. He is represented on the west coast by Merry Karnowsky Gallery, where he currently has work on view in the group show Parallel Universe through October 4, 2014. Caleb currently lives and works in New York City.

OtherPeoplesPixels: Tell us about your process of composing digitally and painting hyper-realistically.

Caleb Brown: I base my paintings on Photoshop collages that I create by combining and manipulating various found digital images. I use the resulting elastic and ephemeral digital collages as preliminary drawings and then translate them into the physical and permanent medium of oil paint. I look at contemporary pieces like Christian Marclay's The Clock and think about how he elevated the form of internet supercuts into “high” art. I try to see if I can do the same with the visual language of memes and Photoshop battles. I'm attempting to create pieces that marry the emerging modes of digital visual expression with classical composition and materials in order to make paintings that reflect the modern world in their methods of construction as well as their content. I think that hyperrealism can function as a demonstration of an artist's commitment to an idea (no matter how ridiculous the idea is) and forces the viewer to engage an image more actively as a result. 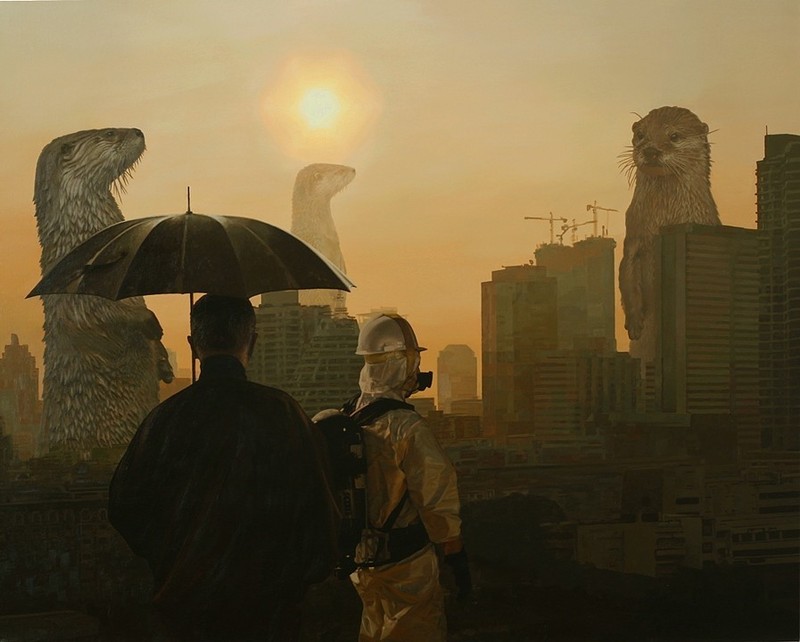 CB: Although my work is inspired more by photoshop battle-style memes, I love the Doge meme. I’m fascinated at how it’s progressed from the original Doge meme, to the semi-ironic Dogecoin cryptocurrency, to the Dogecoin-sponsored NASCAR car. It’s like the internet meme manifested itself into our physical existence through sheer cuteness.

OPP: You mention in your statement that you are "inspired as much by the fledgling visual vernacular of internet meme culture as by the materials and composition of classical Flemish painting." but my first thought was disaster movies and Creature Features, like Godzilla, The Blob and Tarantula. Are you influenced by cinema?

CB: My work is very influenced by film. Most directly the Otter City paintings are a direct response to the Godzilla films. Godzilla is an allegory of the dangers of irresponsible nuclear testing, where the consequence of humankind's transgression against the natural world is sudden and disastrous. My otter paintings present a much more ambiguous view in which the natural world is changed in enormous and irrecoverable ways by the modern human world. The relationship between the two has evolved in strange and unforeseeable ways as well. One thing that I have complete faith in is our ability to accept and adapt to circumstances that seemed inconceivable or nightmarish just a generation earlier. 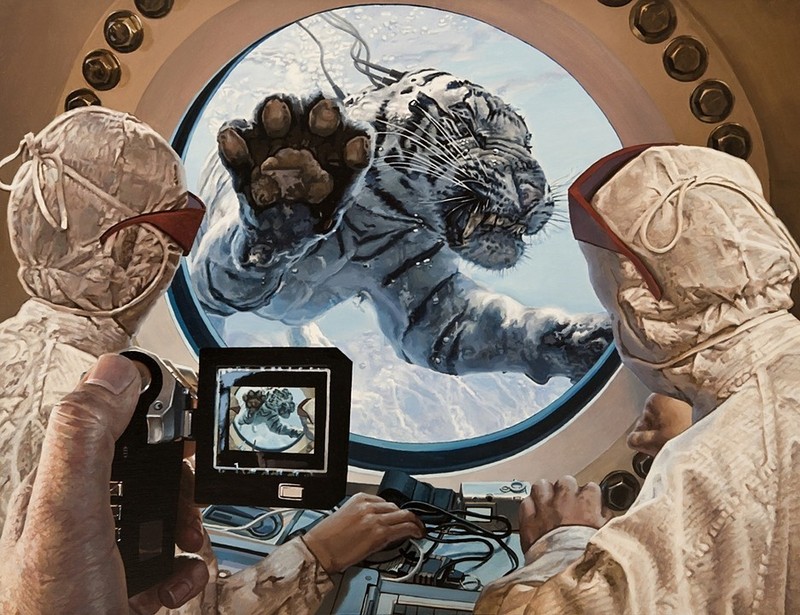 OPP: I have that faith, too, but what seems nightmarish to me at the moment is the collective inability to be in the present moment, physically and mentally, as represented in ubiquitous use of all our digital devices. Multitasking has its place in a work environment, but I think if we don’t all practice slowing down more and being right here, we are endangering our mental health. And yet, I totally support the creative, connective uses of new technology. This is one of the reasons that I enjoy your work. Representing those “modes of digital visual expression” in painting is great. Not because painting is a superior form, but because it’s imperative that we shift our brains out of virtual spaces more often. Thoughts on this?

CB: I admit, I have a kind of leery affection for both worlds. I suppose that my paintings represent a kind of extreme balance between the kind of manic, ephemeral digital world and the meditative, physical act of painting. The dichotomy between the impulsive nature of digital imagery and the stolid commitment of oil paint creates an interesting tension in my work. That tension works as a metaphor for the contradictions of modern life. 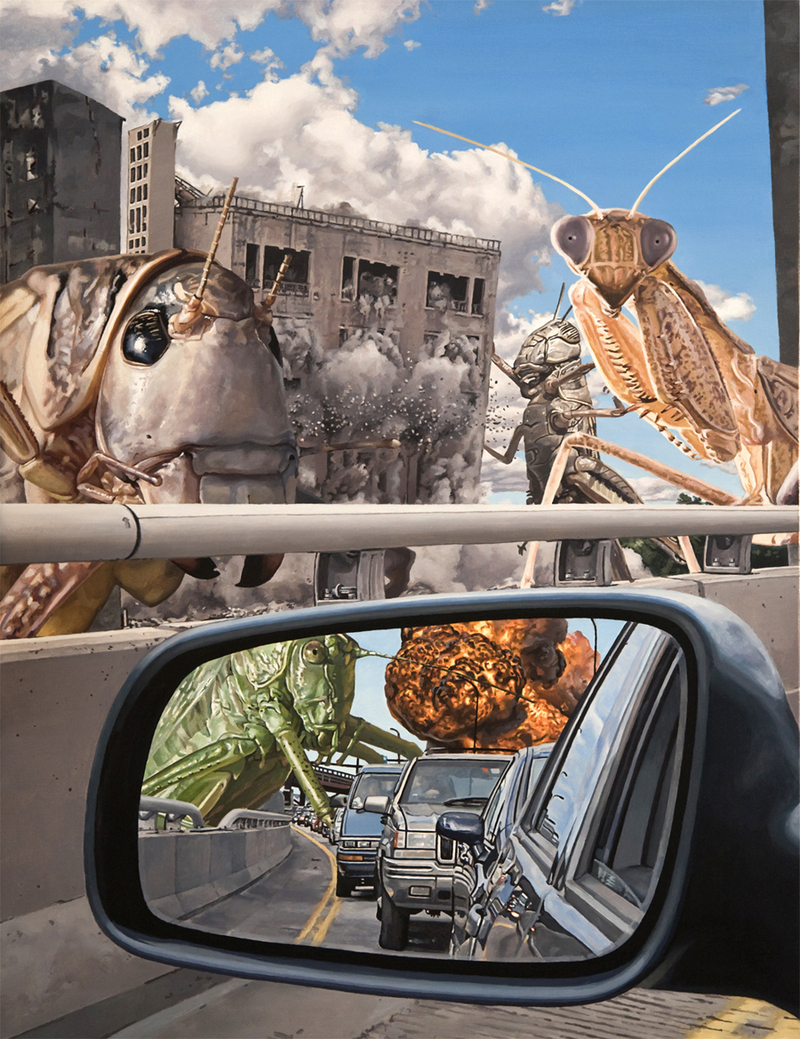 OPP: In Bug City 1 and 2, we view some of the action through the rear view mirror. In several of the Shark Drops, our view is from the safety of the inside of the plane, looking out the window. Could you talk about this repeated visual motif of the frame within a frame?

CB: I like to compose paintings that put the viewer in a very rigid and specific point of view in the hopes of involving them more completely in the world I'm creating. A lot of my paintings actually begin with a compositional idea. For instance, the Bug City paintings began with the idea of trying capture the feeling of having your life affected by a global crisis that is as incomprehensible in nature as it is in scope by creating an image that literally surrounds the viewer with chaos on all sides. I came up with the idea of the rear-view mirror as a device to situate the viewer in a very specific participatory position as it relates to the events in the painting. It’s also a method to describe the space behind as well as in front of the viewer, therefore depicting the their entire world. It's kind of an attempt at a visual representation of the inescapable and unfathomable forces that affect us all.

OPP: Your paintings certainly present a grim and terrifying world, and you speak of them as allegories for contemporary life. Are you deeply pessimistic about the future of the world we live in?

CB: I believe that the combination of severe and seemingly irreversible climate change and genetic engineering of crops and animals are evidence that we're entering an age in which the balance between humans and nature has been upset indefinitely. I don't want to sound overly pessimistic about the future (except for the climate change, that's obviously pretty terrible), but I think that the human manipulation of the natural world has crossed a rubicon and, whether good or bad, our world will soon look very different than it ever has.

While my paintings reflect my observations and opinions of modern life by exaggerating them into some pretty nightmarish scenarios, I try to inject the humor and excitement that I see in the modern world as well. My paintings usually capture an almost slapstick moment where a figure or the viewer suddenly locks eyes with a great white shark as it falls through the sky or a giant otter as it wanders through a hazy cityscape. It's usually a kind of stunned and uncertain meeting of the two worlds. 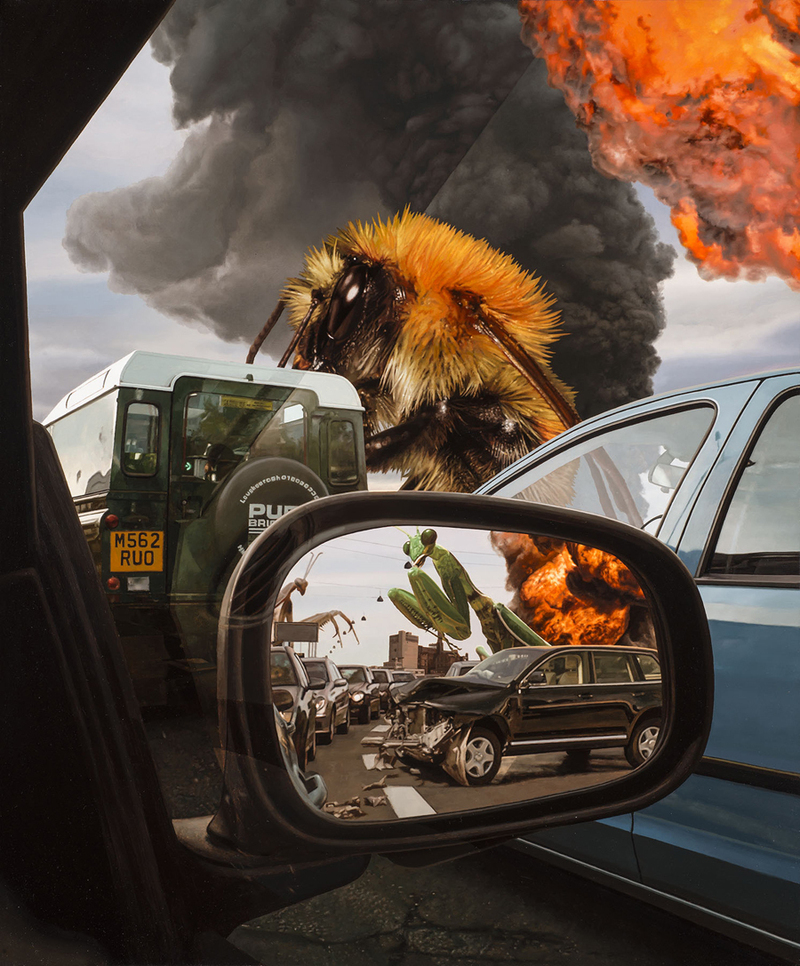 OPP: What gives you hope?

CB: The one thing that gives me the most hope for the future is the incredible human aptitude for innovation. Even though it can be terrifying to imagine what our world may become as a result of mankind’s interference with the natural world, it’s also kind of thrilling to imagine what solutions we might be capable of achieving.

CB: My favorite piece right now is Bug City 2. I think the composition works well in the way that it slices the space up and repeats the colors and forms throughout the painting. I was able to build a crisp, layered atmospheric space, using multiple framing devices to compose a pretty complicated yet coherent world for the viewer to explore. I definitely spent more time composing this piece prior to painting it than any of my other work.

CB: It’s funny. I think Sharknado is actually reflecting some of the same notions of arbitrary fear (exaggerated to almost comic levels) that I had when conceptualizing my Shark Drop paintings—although, I have to admit to not having seen either Sharknado movie. Unfortunately, the cultural impact of Sharknado now overshadows any conversations I was hoping to provoke with my Shark Drop paintings, so I haven’t made any new ones since the movies came out. About six or seven years ago, I made a painting called Sports Explosion depicting our detached experience of the world through digital media in which several track & field athletes fly through the air with an over-idealized Hollywood explosion behind them—having just finished graduate school at Boston University, I included a Boston jersey-ed athlete. I don’t really know what to do with that painting now. I guess the viewing context for artwork is as fluid and unpredictable as the world we live in. 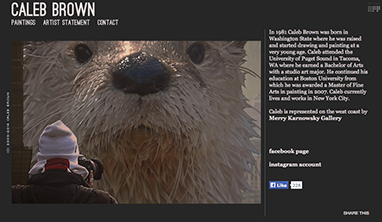