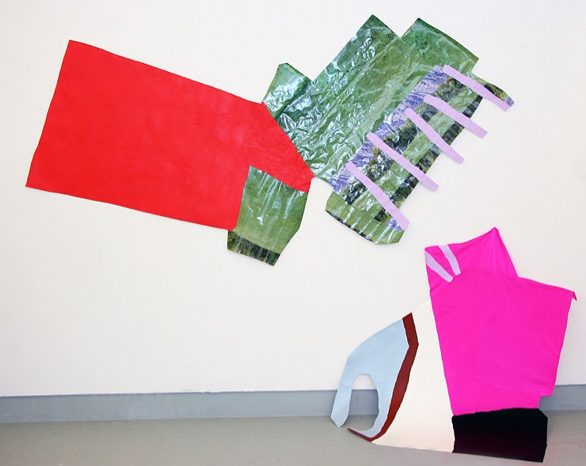 MEGAN STROECH employs shared associations of color and texture to hint at human emotions, traits and drama in her abstract, mixed media works. She chooses easily-accessible materials such as vinyl, fleece, latex, cardboard, paper and various printmaking techniques, often straddling the two-dimensional and the three-dimensional in her collages constructions. Megan received her BFA from the University of Texas at Austin (2008) and her MFA from Illinois State University (2012). In 2012, she was an artist-in-residence at Anderson Ranch Arts Center in Colorado. In 2013, she began the year-long HATCH Projects Artist Residency at Chicago Artists’ Coalition, which pairs emerging artists with emerging curators to produce three-person exhibitions. She has two upcoming solo exhibitions: Social Niceties at Jan Brandt Gallery in Bloomington, Illinois (April 2014) and Megan Stroech: New Work, SUB-MISSION at The Mission in Chicago (June 2014). Megan lives and works in Chicago.

OtherPeoplesPixels: You've written that you are "fascinated by the tendency to assign human capacities like joy and aggression to patches of color and textured elements of collage." How much does "the anthropomorphizing of non-representational objects and shapes" affect the compositions you make? As the artist, are your own emotional experiences and interpretations dictating the juxtapositions of color and texture, or is it more about the tendency of viewers to assign meaning to abstraction?

Megan Stroech: When I start making a piece, I go in with an idea of an object or an action that interests me. In the beginning, my experiences come into play, but I don’t necessarily want the viewer to get back to that place in the finished work. My initial idea becomes more and more abstracted throughout the process. I muse on the imagined viewer’s possible preconceived notions that come with particular colors and formal relationships. Ultimately, I’m more concerned with the meaning that a viewer can assign to the colors and textures that I place in conversation with one another. 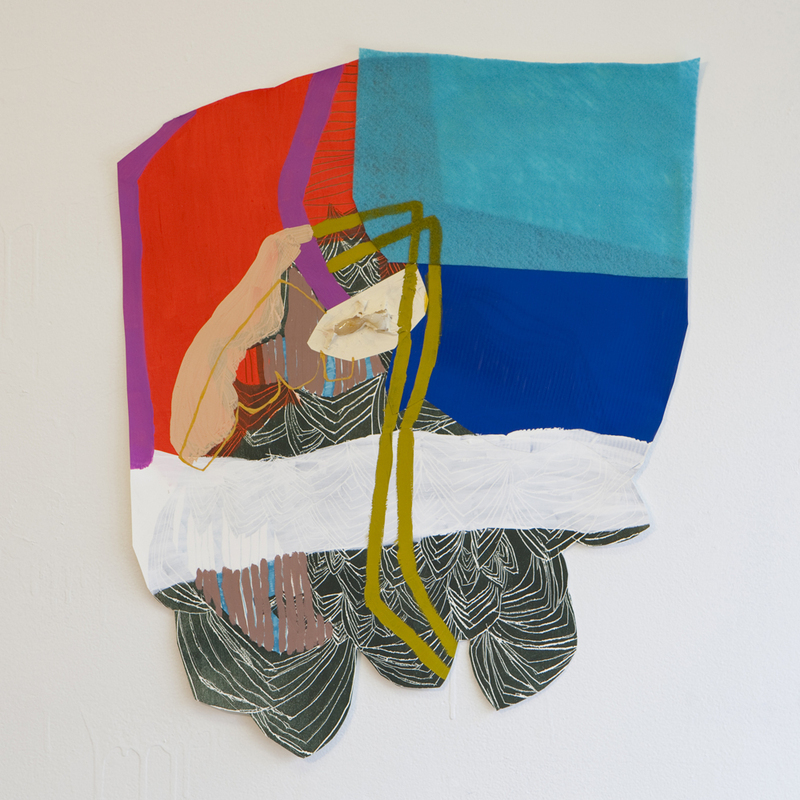 OPP: Can you give us an example of a really surprising or exciting response from a viewer to one of your pieces?

MS: At the opening of my Anderson Ranch installation, a viewer was so eager to get up close to Green Giant that he asked if he could jump into the "hole"—the area of the floor that was not filled by green paint. He then excitedly jumped inside, careful not to touch any of the green painted areas. It was fun to see that kind of physical interaction with one of my works, and it paved the way for more thinking about how to dictate viewer interaction with a piece. 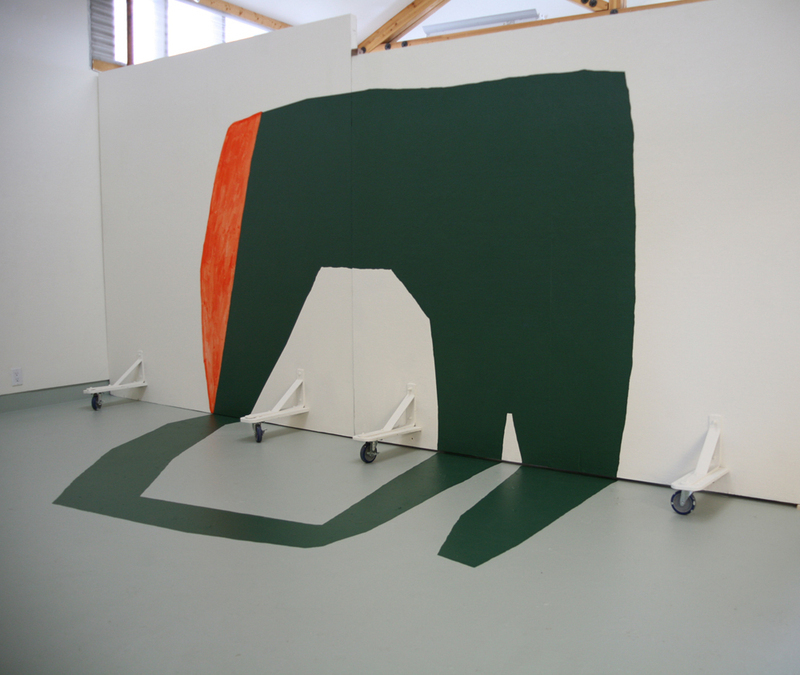 OPP: Could you talk about your interest in the space between the floor and the wall? When did you first get the urge to straddle this boundary line?

MS: During my last semester of grad school, I began to produce larger scale works. They were more dynamic and could function as objects, playful figures or spaces. Extending the work onto the walls and floor was a natural progression for me; it allows the work to become an active participant in the gallery space. It is also a playful way to critique the gallery as a closed system with specific parameters. Many gallery spaces have strict rules about altering the space itself in order to present a work. The act of painting on the floor or directly on the wall calls attention to that.

I had been thinking about this for a while, but was able to first put into action during my ten-week residency at Anderson Ranch Arts Center. I had already been experimenting with works that cascaded onto the floor, but for the first time I had the freedom to alter the installation space in any way I wanted. I didn't have a studio at home in Chicago at this point, so I wasn't sure when I would get that chance again. I had to take the leap and work directly on the wall. I loved the immediacy of painting on the wall and that it forced me to quickly react to each mark I made. 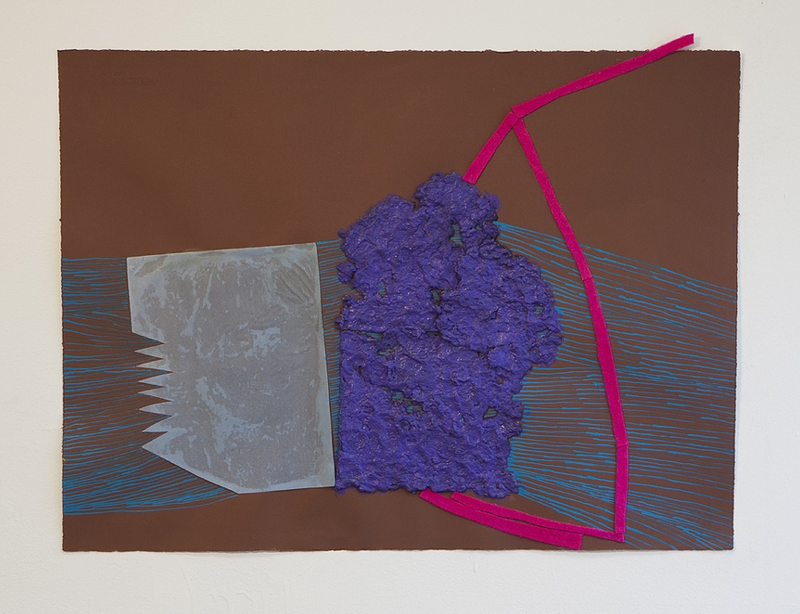 OPP: If someone's life depended on you choosing one or the other, what's more important to you: color or texture?

MS: I’d have to say color. Color carries so much weight in terms of constructing a place or object. I keep that in mind while creating work. One of my guilty pleasures when starting a piece is to pair two colors together that come with a distinct association—sky blue and grass green, for example—and then try to take them out of that context. I’m always interested in learning how color can play a role in one’s daily routine. For example, grocery stores use specific colors to market products to consumers. Texture is an area that I’d definitely like to push more in my work. In the future, I plan to use more substantial materials like wood in order to be able to support different textural elements. 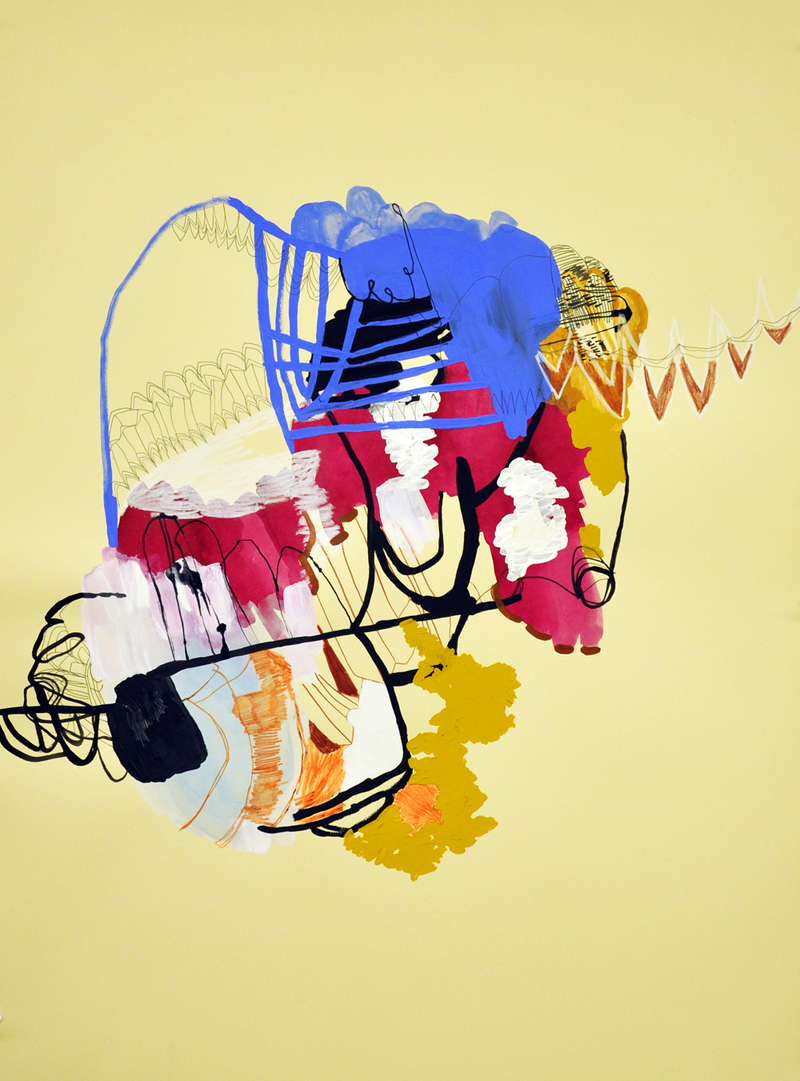 OPP: What are your thoughts on abstraction as play?

MS: The work I identify most with from other artists is that which incorporates humor or play, but still participates in a serious and relevant conversation in contemporary art. My work is very playful, and I think abstraction allows for so much exploration into the nuances that make up one’s everyday observations. I am drawn to specific formal elements that seem to take on challenges, but don’t quite succeed. Or they fail in a funny way, like imitating a piece of fabric with paint or repeatedly painting over a line in an attempt to make it look straight. I’m drawn to these little details that appear to be missteps. I see them as a way to mimic awkward or funny human interactions.

OPP: You have an upcoming solo installation at THE SUB-MISSION, the basement space at The Mission in Chicago (June 2014). Will you give us a sneak preview of what you are planning?

MS: At the THE SUB-MISSION I plan create approximately three works that start on the wall, and flow onto the floor through the use of paint and fabric. In addition to the wall works, I hope to construct some floor pieces that have three-dimensional elements, which will force the viewer to interact with the space in specific ways. I’m interested in building three-dimensional forms that act as an underlying armature for fabric or paper. My show there is slated to open in late June, 2014. 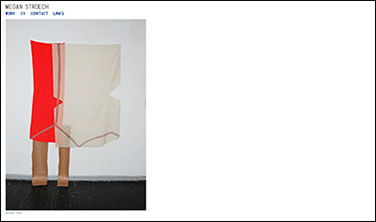 To see more of Megan's work, please visit meganstroech.com.
Featured Artist Interviews are conducted by Chicago-based interdisciplinary artist Stacia Yeapanis. When she’s not writing for OPP, Stacia explores the relationship between repetition, desire and impermanence in her cross-stitch embroideries, remix video and collage installations. She is an instructor in the Department of Fiber and Material Studies at The School of the Art Institute of Chicago, where received her MFA in 2006, and was a 2012-2013 Mentor-in-Residence at BOLT in Chicago. Her solo exhibition I Still Haven’t Found What I’m Looking For at Klemm Gallery, Siena Heights University (Adrian, Michigan) recently closed, and her solo exhibition Everything You Need is Already Here is on view at Heaven Gallery in Chicago until February 17, 2014.