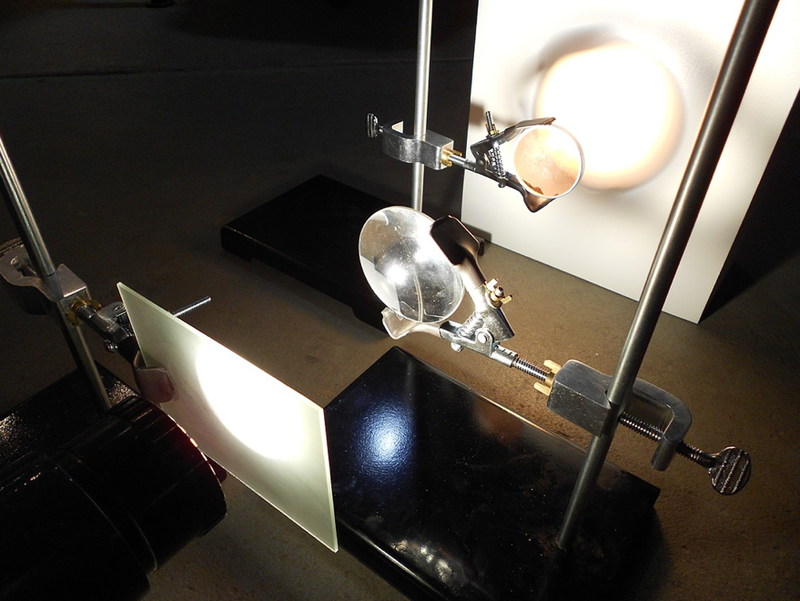 CHRISTOPHER OTTINGER mines objects that relate to the history of media technologies in order to understand human perception and the relationships between humans and machines. He uses projection, mirrors and the guts of discarded electronics to create sculptural machines that appear to look at themselves, asking viewers to consider the presence of consciousness in technology. Christopher received his MFA from Washington University in 2011. In 2012-2013, he was in residence at BOLT, where he will remain as a mentor-in-residence for 2013-2014. In the spring of 2014, he will also be an artist-in-residence at the Media Archeology Lab in Boulder, Colorado. Christopher lives and works in Chicago, Illinois.

OtherPeoplesPixels: What is media archaeology? How does it influence your practice?

Christopher Ottinger: For some, media archaeology is about the artistic and theoretical practice of mining the technological media past in order to re-envision the technological present and to suggest alternate paths technology might take in the future. For others, it’s just media theory in a fancy hat. Personally, I think it’s a bit of both. In my own practice, media archeology frames the theoretical conversation around my work, but I tend to think of myself as more of an alchemist than an archaeologist in the studio.

OPP: To “alchemist,” would you add designer, inventor or tinkerer?

CO: Probably a mixture of the three—definitely a tinkerer, though. I like to play mad scientist and dissect old junk. That’s the fun part. There is also a fair amount of prototyping, experimentation and research that goes into the work, but I feel most like an artist when I rip the guts out of a broken video camera or an old television set and discover some new use for those objects. Perhaps taxidermist should be in there as well. 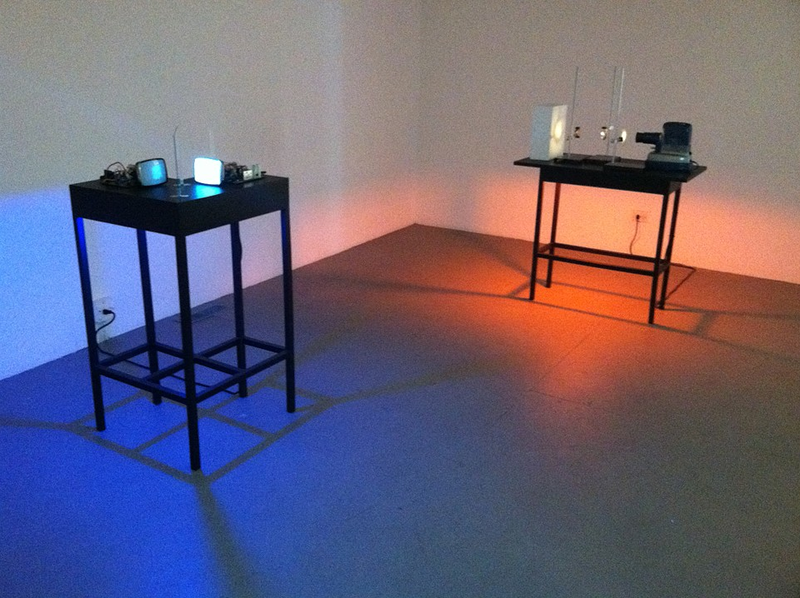 OPP: Your recent solo exhibition, Ghost Machine, in the BOLT Project Space in Chicago features three pieces that are part sculpture and part machine. In NTSC Ghost, three handheld projectors cast the image of the familiar SMPTE color bars onto a spinning screen. Blue Ghost uses a piece of glass to project the image of static from one cathode ray tube to another, while Incandescent Ghost turns an old film projector into a camera obscura that sees itself. What was the premise of the show? Could you talk about the intersection between sculpture and machine in your work?

CO: The meaning of this body of work only became clear to me recently. My brother wrote the essay for the show. He and I had been discussing the work in terms of the history of moving images and inquiries into the nature of technological objects. My brother then introduced psychoanalysis into the conversation. We started asking questions like, “what does it look like when machines think?” and “what is infancy like for a machine, from a cognitive standpoint?”

It didn’t really come together, however, until Sarah Nardi from the Chicago Reader asked me why these objects appear to be looking at themselves. It occurred to me that these objects aren’t just machines trapped in a state of arrested development. They represent machines at a very specific moment in their development as beings. These works are machines standing at the threshold of consciousness. They have not yet formulated a language with which to assert themselves as autonomous beings, but they are taking that first step.

The sculptural or furniture-like aspect of these works places them in a domestic context that is both familiar and alien. This is similar to a television set, which is both a piece of furniture and has the ability to summon ethereal worlds out of thin air. 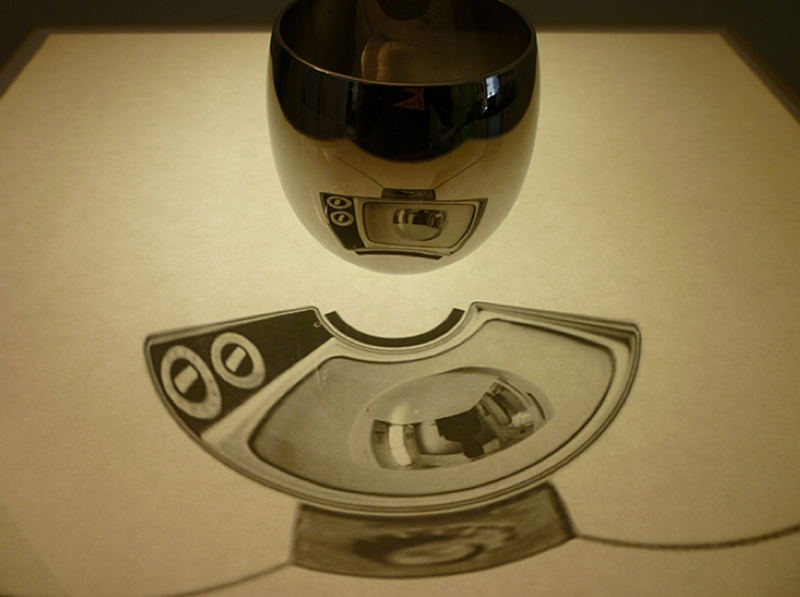 OPP: Are the machines metaphors?


CO: My use of metaphor in this body of work comes from reading about object-oriented ontology. This sounds like a super nerdy branch of philosophy—which it is—but Ian Bogost’s book, Alien Phenomenology, is fairly useful in terms of ideas. In short, Bogost’s theory is that, in order to understand the nature of a thing, we must attempt to understand the thing from the thing’s perspective. Obviously, this is impossible. We’re never going to really know what it’s like to physically be a hammer or a teapot, but Bogost suggests that we can estimate that experience through a kind of productive metaphor.

My sculptures function as visual metaphors for the pre-cognitive experience of machines. Language has not yet formed. The machines are concerned only with sensation, but there is no thinking to give these sensations meaning. It’s like early childhood development research for technical objects—Melanie Klein is probably turning over in her grave right now. 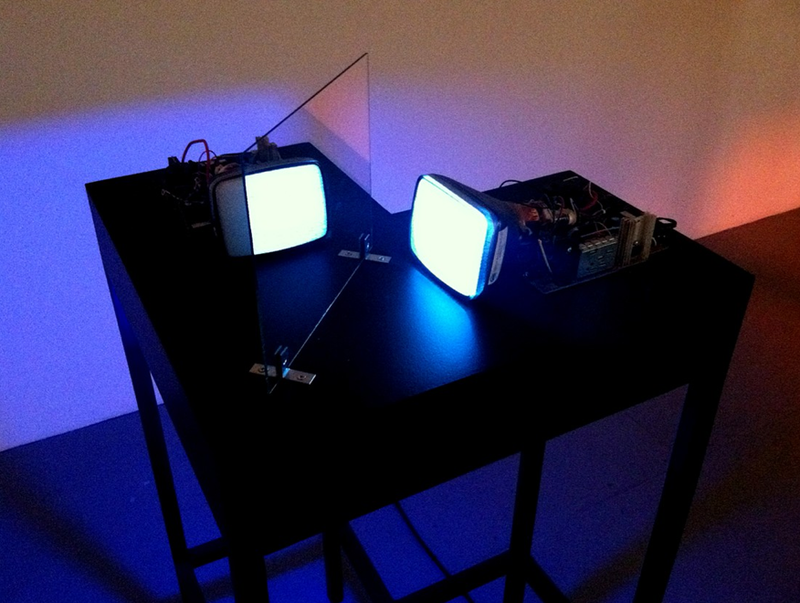 OPP: Ghosts and machines show up repeatedly in your earlier work as well: Snow_Ghost (2008), Ghost Machine #3 (2011) and Phone Ghost (2011), to name a few. The phrase ‘ghost in the machine’ originally refers to Gilbert Ryle’s critique of the Cartesian assertion that the mind and the body are distinct from one another. In Ryle’s book, The Concept of Mind, the machine is the human body. But over the years the phrase has been recontextualized through science fiction and pop culture as a way to explore our fears about technology. There seems to be a lot of confusion online about what the phrase means, but the semantic shift is telling: what we think about technology is connected to what we think about human nature. How do you think about ghosts and machines?

CO: Whether we’re talking about Descarte or a film like I, Robot, I see the ghost that inhabits the machine as consciousness. Of course, we don’t actually have conscious machines yet, so the consciousness revealed here is more like an impression or a representation of a consciousness that’s still forming.

Nevertheless, these technological ghosts allow us to gain some insight into what experience or thought might be like for a technological object. The recurring ghost machine in my work is basically a device for conjuring a machine’s consciousness, like a technological séance. There are countless examples—Pepper’s Ghost and Robertson’s Phantasmagoria—of pre-cinematic technologies that were used to “summon” specters out of thin air. I’ve recreated some of these technologies, but made them more about media technology itself, rather than about demons or spirits.

I agree that what we think about technology is connected to what we think about human nature. That relationship is also changing. As machines become more intelligent, their natures begin to resemble our own. We are becoming more dependent on them to make sense of the world around us. Considering technologies like smartphones or augmented reality gizmos like Google Glasses, it’s not difficult to envision a time when a conversation about the relationship between human and machine is not a conversation about difference or otherness but rather about a shared ontology. 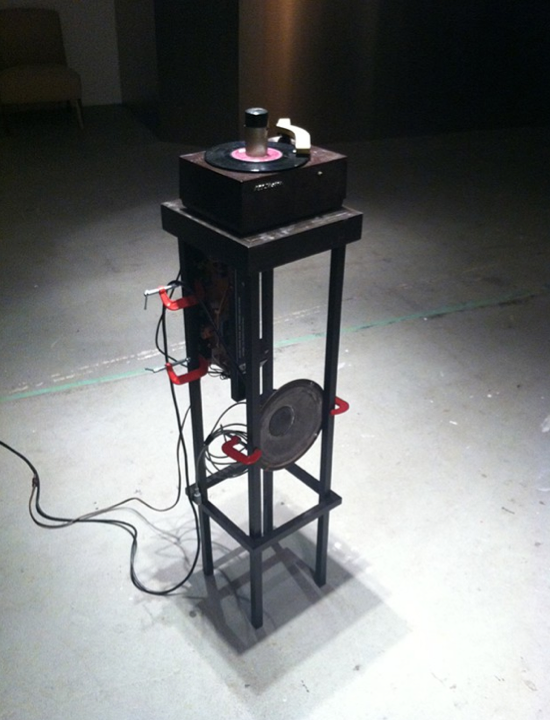 OPP: Would you tell us about a failure in your studio that led to an unexpected success?

CO: This is an interesting question because, in order to formulate a response, I would have to identify what I consider to be a success, and I’m not certain that I know what that is. But I can offer an anecdote about building NTSC Ghost. The interaction of the projectors and the rapidly spinning screen in this piece create a volumetric hologram. Originally, though, I set out to make a piece where the screen moved very slowly. Long story short, I aimed a Super 8mm projector at the motor/screen assembly one day and powered the whole thing up, not realizing that I had the motor turned to its fastest setting. For about three seconds, this miraculous image appeared on the screen. Then, the motor, its housing and the screen all went flying through my studio because none of it was bolted down. I ran out of my studio trying to avoid flying debris. Once the dust had settled, I realized this piece was—somewhat violently—telling me what it wanted to be.

OPP: What are you tinkering with in your studio at the moment?

CO: The usual: trying to figure out new ways to electrocute myself. Seriously though, mostly I’m just experimenting with some new materials. I recently got an Arduino, and I’m trying to learn how to do some basic coding for some kinetic pieces I’ve been playing with. I'm also putting a show together for Heaven Gallery in Chicago for spring 2014, so I've been doing research and doing studio visits for that. The show is still in the early planning stages, but I'm thinking it will deal with media archaeology in some way. 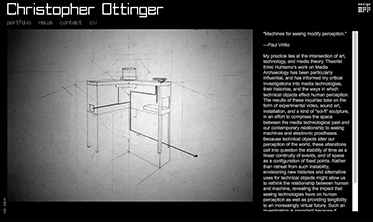 Featured Artist Interviews are conducted by Chicago-based interdisciplinary artist Stacia Yeapanis. When she’s not writing for OPP, Stacia explores the emotional and existential significance of participating in mass media culture in her cross-stitch embroideries, remix video and collage installations. She is an instructor in the Department of Fiber and Material Studies at The School of the Art Institute of Chicago, where received her MFA in 2006, and was a 2012-2013 Mentor-in-Residence at BOLT in Chicago. Her work is on view through September 2013 in Abstracting the Seam (Hyde Park Art Center, Chicago), and she will mount a solo show titled I Still Haven't Found What I'm Looking For (Heaven Gallery, Chicago) in January 2014.