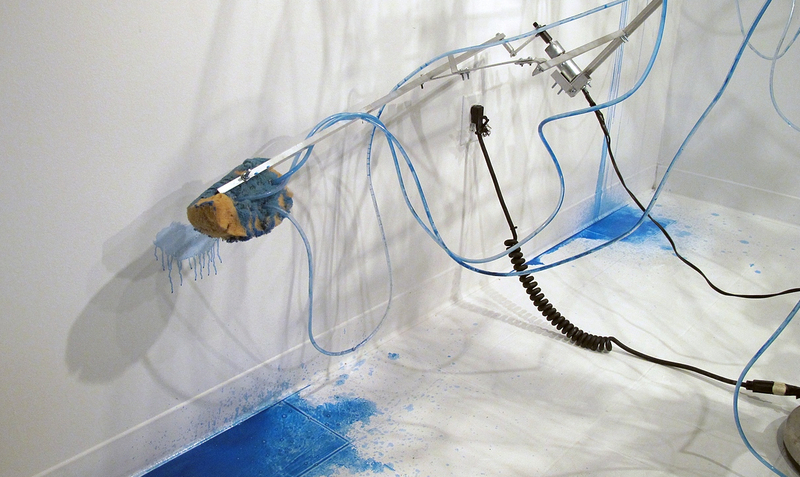 Walking into a MARK PORTER exhibition feels like entering a mad scientist's laboratory, complete with test tubes and a complex web of cords and vinyl tubing. His kinetic, motion sensor-activated sculptures are hard at work, making repetitive marks on the galley wall or floor with a foaming, pigmented fluid. Some of the machines barely seem to function. But even when they fail, they accomplish the task of being stand-ins for humans and animals. In 2012, Mark had two solo exhibitions in Chicago:Autohaemorrhaging Actuators, Recent Kinetic Sculptures and Preliminary Drawings at Peanut Gallery and Autohaemorrhaging Actuator at The Sub-Mission. He also curated Machinations: Kinetic Sculptures in the Age of the Open-source at Glass Curtain Gallery, where he is the Exhibition Coordinator. His first artist monograph Replication Machines, Territorial Markers and Preliminary Drawings is available for purchase through Blurb. Mark lives in Chicago, Illinois.

OtherPeoplesPixels: When did you build your first machine? Was it a kinetic sculpture or something else?

Mark Porter: My first machines were actually drawn on paper. I was pretty young—four or five—when I first became obsessed with sci-fi, mostly Star Wars. (I still am.) I loved thinking about how the ships had the ability to do something as fantastic as moving people across the galaxy and as tragic as blowing them to pieces. I was fascinated by how the ships were capable of harnessing a seemingly unattainable and unnatural energy. I spent hours every day drawing space ships of all sizes and shapes. Some were similar to the designs of Star Wars ships, but eventually I created my own. 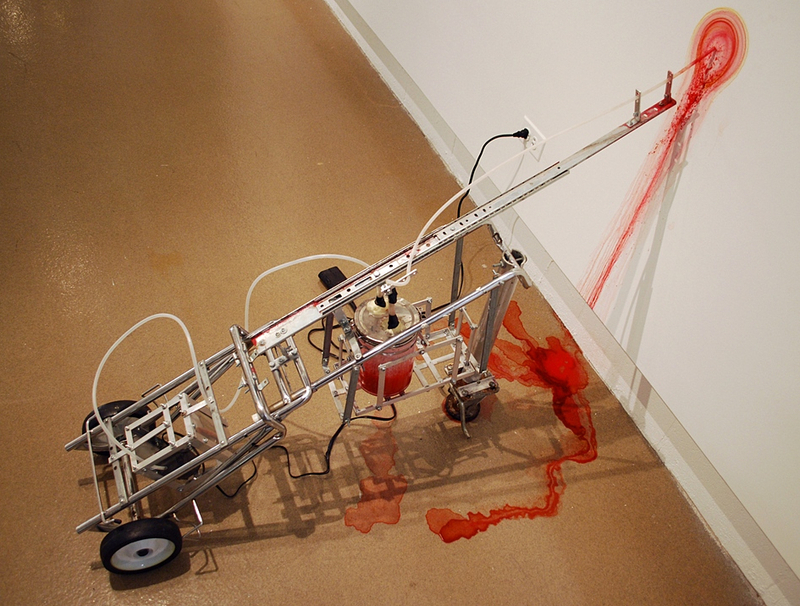 OPP: Where do you find your materials?

MP: I’m a bit of a scavenger. I’m always looking around for bizarre, ill-conceived inventions and objects that have a compelling sense of personal history, not necessarily to be incorporated into sculptural projects. I think about each object in its current state and ask a lot of questions about it, “What caused that dent or bend? What was the object originally intended to do?” Sometimes I can figure it out, and sometimes I can’t. At any rate, I love this sense of mystery. I love re-contextualizing objects. I both respond to them as they come to me, and alter them to suit my needs.

I do purchase some things like electric motors, scientific lab glassware and vinyl tubing. I also think of these as re-contextualized objects. It’s about making an object do something it was not intended to do. But it’s important to me that the sculptures look handmade. People often think of machines as sterile and precise. To a certain degree they are, but they are also organic and messy. They break down, need maintenance and become dirty though use—like us.

OPP: Do your sculptures grow intuitively from responding to objects you collected without a plan? Or do you deliberately seek out or purchase what you need to execute a preconceived design?

MP: When I create a sculpture, the idea I want to communicate or the goal I want the machine to achieve is just the starting point. Each machine is designed to do—or to at least try to do—something specific such as marking territory or creating mini tornadoes. However, improvisation is a big part of my process. Part of the design stage happens when I am scavenging for objects or when I’m looking at a collection of stuff that I've already found. Obviously, I work with a lot of metal. Approximately 75% of the work in my last exhibition Autohaemorrhaging Actuator was constructed from discarded aluminum lawn chairs and walkers. As with most of my pieces, I wanted to both preserve the integrity of the chairs and walker parts and totally transform them. Some elements remain recognizable while others do not. So, the re-contextualizing occurs through my fusion of found objects with custommade objects or with mechanisms I have created from stock materials such a stock aluminum or Plexiglass. My work is inherently an example of how every design evolves throughout its production process. 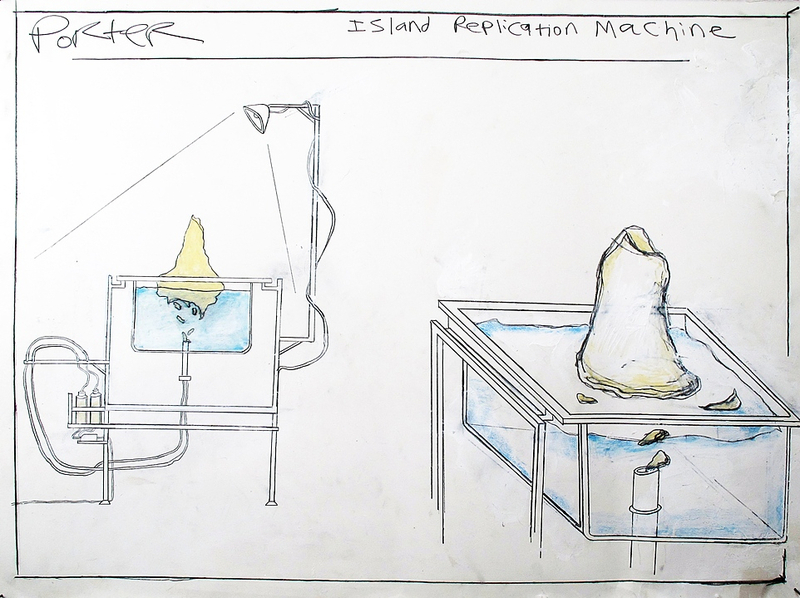 OPP: You often exhibit your preliminary drawings alongside the sculptures themselves. Could you talk about how they work together?

MP: When I create artwork, I’m channeling the inventor part of my personality. I think about design—mechanical or otherwise—as an extension of the human hand. Designs aren’t always successful, but they are a reflection of the individual who conceived them. My drawings and sculptures both reflect that inventor part. They exist as the same body of work, but they ultimately serve different purposes.

Sometimes the drawings exaggerate the potential success or productivity of the machines; other times the machines are more productive than the drawings predict. By exhibiting them together, I ask the viewer to compare the similarities and the differences and to ask questions about the evolution of the idea from paper sketch to sculptural object: “What is different and what is similar? Does it matter if they are different/similar?"OPP: Do you enjoy drawing and building equally or is one part of the process more pleasurable for you?

MP: I think of myself primarily as a sculptor, but I do enjoy making the preliminary drawings. Trying to convey a three-dimensional object on a two-dimensional plane is a hilariously frustrating, inadequate and torturous process. But drawing is very direct and immediately satisfying because it can be gestural and exaggerated. The drawings are an outlet for me to document and develop the ideas for machines I want to build.

When I create the drawings, I layer images in the same spirit in which I fuse found objects with custombuilt objects. First, I create a series of drawings that convey ideas I want to modify or develop further. I photograph the drawings, manipulate them slightly in Photoshop, print them using a toner-based printer and transfer them onto drawing paper with wintergreen oil. Then I further manipulate the images by drawing over them. I merge multiple images from previous drawings together to form a new, more developed idea. This process of building and layering is pretty noticeable when all of the drawings are shown together. When I’m building the sculptures, I reference the drawings much like one would any type of blueprint or schematic drawing. 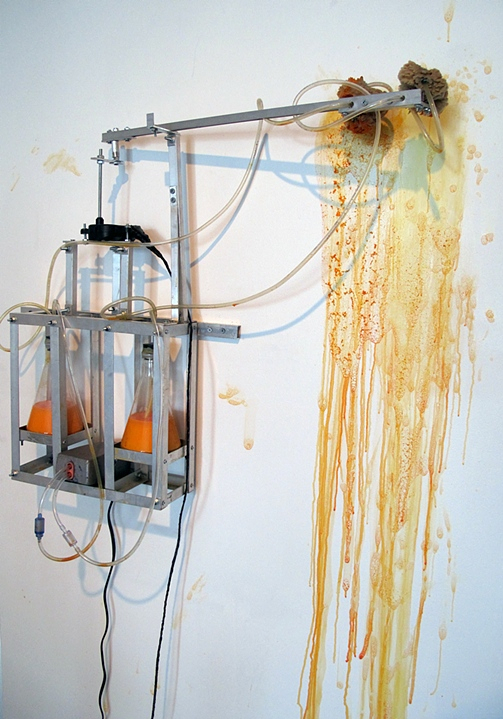 OPP: I loved your recent solo show Autohaemorrhaging Actuators, Recent Kinetic Sculptures and Preliminary Drawings at Peanut Gallery in Chicago. I was most struck by the cacophony of motion and sound. Seeing all of those machines at work on their separate functions but in the same exhibition space is pivotal to how I understand your work. I loved watching them all moving and trying, huffing and puffing and breaking down. I find them poignant. They have an existential quality to them. They just keep going, even when they shouldn't—even when their actions have no real purpose and their motion seems only to be about staying in motion. Does this resonate with the way you think about the sculptures?

MP: First of all, thanks! These comments definitely resonate with me. As I mentioned before, my creations are not only machines but also representatives and extensions of the human hand. That’s what I love about making art in general; I can create something that speaks for me.

I have a frustrating and rewarding relationship with my sculptures. When I install an exhibition, I plug the pieces in and let them do what they were meant to do. Sometimes there are no surprises, and everything chugs along as I intended. But the machines don’t always do what I planned. They begin to do what they want to do. In the end I am always certain that I have created machines that are confident and determined: they try really, really hard regardless of whether they fail.

The individual pieces are always changing. As they age, they need repairs and upgrades. The same piece rarely looks the same from show to show. I don’t make major alterations to each piece, but each piece changes through its use. I’m not interested in creating precious sculptural objects. My sculptures evolve; they are performative. I often refer to them as “prototypes” because I never really think of them as complete. My drawings are the exception: once they are finished, they are finished. In creating them, I develop an idea to a certain point and then I move on to the next one. 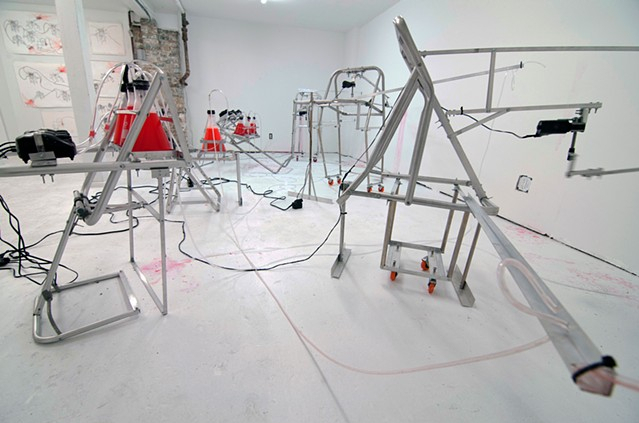 OPP: According to the press release for Autohaemorrhaging Actuators, your recent sculptures are intended to "mimic biological functions and human/animal behaviors such as demarcation, the process of marking of one’s personal territory, and autohaemorrhaging, the action of animals deliberately ejecting blood from the body as a defensive tactic." I've also read several reviews in which people refer to your sculptures as drawing machines. It's interesting to think about the connection between drawing, biology and mechanization in your work. We often assume that what drives us as artists is a function of higher consciousness, but what if it isn't? Is there a connection between what we all do as artists and the biological functions you refer to in your titles?

MP: Absolutely. I think that all living things are certainly driven by a higher consciousness, but they are also controlled by their bodies. Humans and animals are all engaged in a life long battle between what the mind wants and what the body wants. It’s fantastic when they are in sync, and it's interesting and tragic when they are not. I’m fairly obsessed with making the drawing machines, the territorial markers and the Autohaemorrhaging Actuators because I am interested in the natural necessity of self-expression. My work is both commentary on and a living example of what happens when the mechanisms designed to carry out expression are working correctly or incorrectly. The fluids that cycle through these works represent something that is essential to the machine. The fluids can be read as blood, transmission fluid or paint; they are vital to the body and vital to the mind. 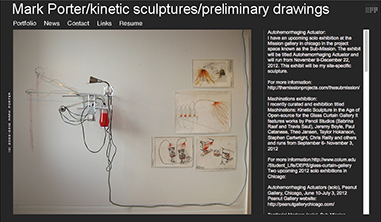