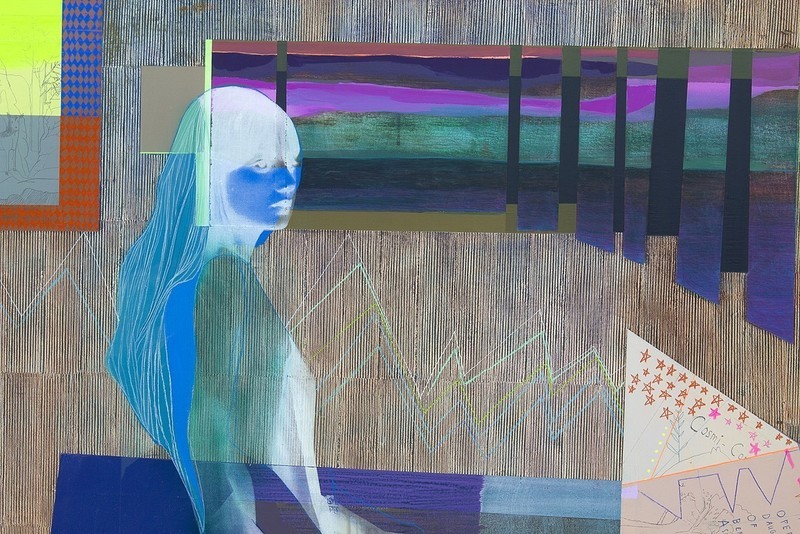 KRISTEN SCHIELE is inspired by "stage sets, cinema, folklore, allegory, kitsch, and storytelling." Her paintings and sculptures combine color and pattern with appropriated silkscreened images from films and magazines. The result is frenetic and tumultuous surface intensity that belies the complexity of the interwoven stories of youth culture. Kristen earned her BFA from Indiana University in Bloomington and her MFA from American University in Washington, D.C. and went on to study at Hochschule Der Kunste in Berlin. Her work is a currently on view in Summer Mixer, a group show at Joshua Liner Gallery (New York City). Upcoming group exhibitions include Your Bad Self at Arts and Leisure Gallery (New York) and An Odyssey at Torrence Art Museum in California, both opening in September. OOOT MMMMM, a silkscreen book collaboration with Abe Smith published by Kayrock Screenprinting, will be available at the Printed Matter Book Fair at PS1 MOMA in New York City (September 17-19, 2015). Kristen lives and works in Brooklyn, New York.

OtherPeoplesPixels: Pattern features prominently in your work, but so does the figure. . . how do the two relate to one another?

Kristen Schiele: I paint to tell stories, usually inspired by books, film and memories. The figure is either in the work or is the viewer seeing the work. In the same way a graphic novelist designs the page to tell a story, I use pattern as a framing element. Giotto would break up stories with intricate panels and borders in order to make the stories ornate and to lead the viewer. I'm obsessed with researching patterns in any books I can find. Carl Jung talked about ancient, primal, universal language, and since every culture has created pattern and design, there is something of this universal, primal language in pattern and symmetry. 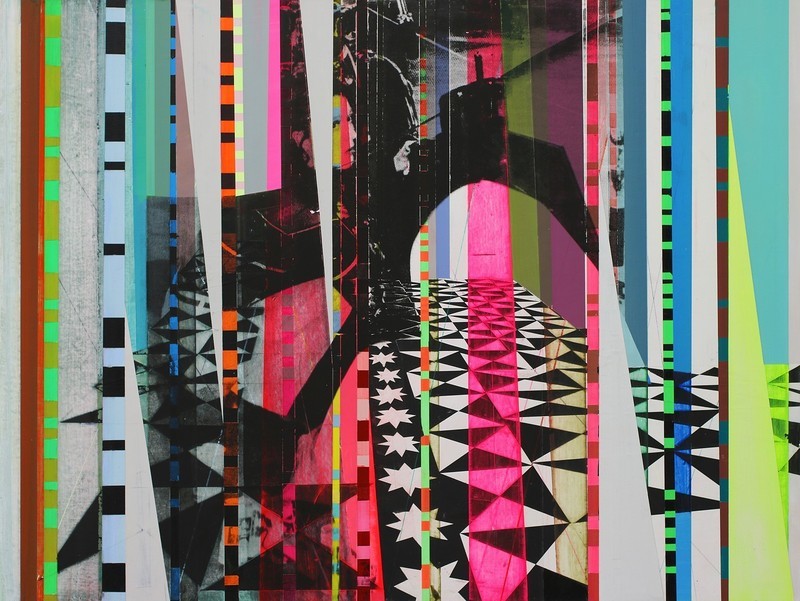 OPP: Tell us about a particular go-to pattern and what you’ve learned about it in your research.

KS: I love geometric patterns: German, Swiss, Finnish, Swedish, Russian 1920s-1950s era. In the 1950s, the Marimekko and later 1970s California pattern designers did something amazing from the 1920s French design work of simplified, large scale patterns. But no pattern is a go-to pattern. I'd say love of the diagonal brings me to the Chevron pattern, as in the painting Melanie Malone. It mirrors the space.

OPP: Can you talk about layers in your work, both literally and figuratively?

KS: I have always loved to allow simultaneous readings in my work, and I probably think of too many things at once. Rather than make a reduced, perfect image, I layer work so the viewer is in several places at once. I often work from unruly, meticulously cut piles of collage material from hundreds of vintage magazines, books or movie screen shots. I start from the collages, drawing in the work, painting in acrylic paint, or sometimes adding layers of silkscreen. Silkscreened images can sit on the surface, but a viewer can see through them and cannot miss their shape and meaning—like in the newspaper or  Lichtenstein and Warhol pieces. I often go one more layer of color or use oil at the end, as it is dense and sits on the surface. 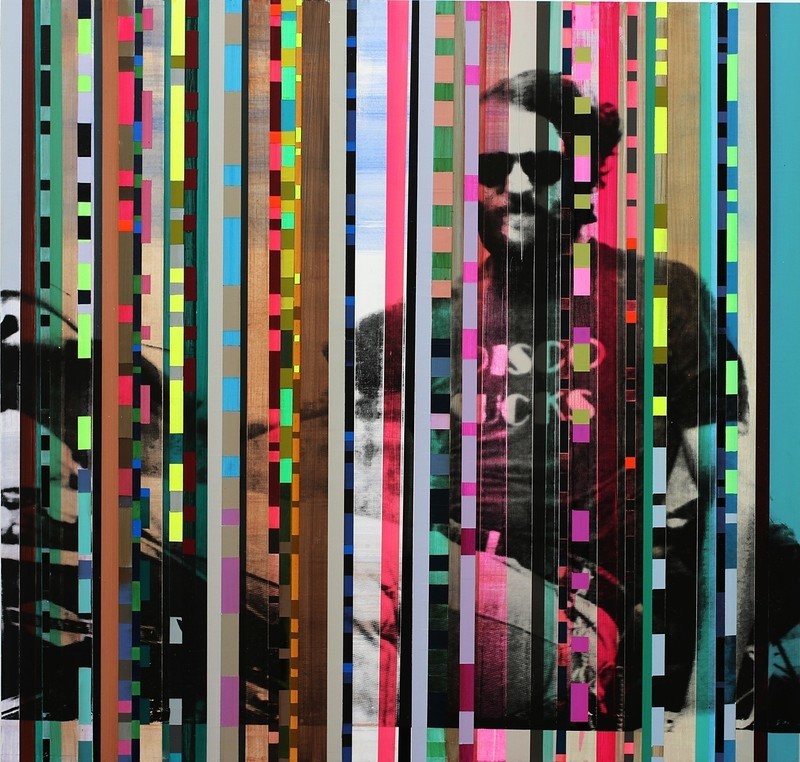 OPP: The layers of pattern give me a little bit of a voyeuristic feeling, like I’m looking through blinds or curtains to see what’s happening behind them. In some more recent pieces, like Halston Disco and Disco Sucks, that feeling is especially strong. There’s the visual attraction of the pattern and color, and then there’s the frustration of having my view obstructed and having to push past it to see the story. Thoughts?

KS: I do like the idea of a journey or voyeurism. I like there to be a journey in layers rather than the amazing, Japanese elegance of pictorial design and flattening of space. I think more in terms of a video game going front to back. Halston Disco is from the 70s/ Studio 54 era, and Disco Sucks is an image from a vintage Easy Rider magazine of a 70s biker, with his slogan T-shirt and adorable could-be-a-guy-in-Williamsburg, Brooklyn look. I pretty much smashed disco cuteness on cool people. I'm making myself laugh, essentially, and spending tons of hours on individual-taped off squares of color. In a similar piece Tiga, the aggressive, silkscreened image of a tiger is the negative space in what is really, a painted quilt of pattern. I like to play with what I think is masculine authority and give sweetness or craft the authority. 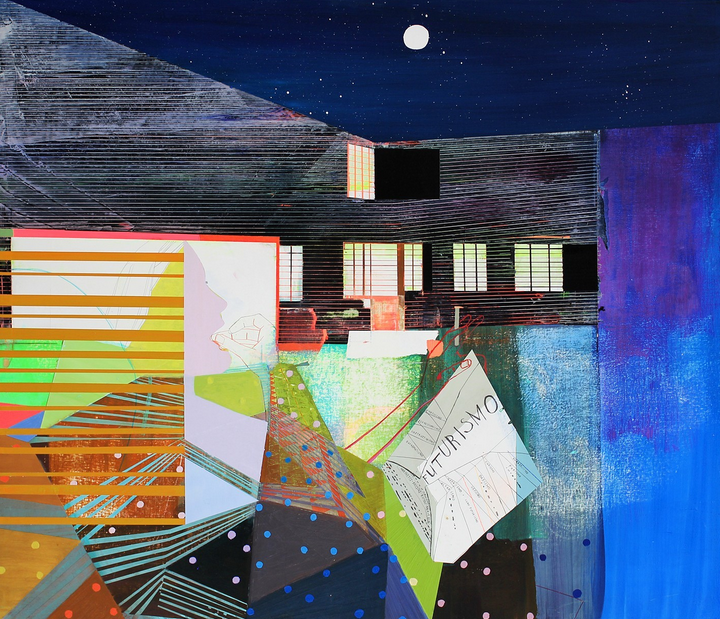 OPP: In what ways have you been influenced by stage sets, cinema and the theater?

KS: My first experiences of being deeply moved by art were watching the stop animation movies by Czech masters of the 1930s, like Berthold Bartosch’s L'Idee or Dada films, which also influenced Chilean director Jodorowsky. These artists create poetic space for a story, with pieces of bedrooms or houses, dense color and abstractions. This informs how I create space in my work. For me, the bedroom should include the dark sky and moon if you are, say, thinking of the lead character reading her husband's diary in Ingmar Bergman's film Hour of the Wolf. In the painting Futurismo, for example, there is a figure in the foreground, eating and reading an Italian Futurism manifesto. She is in her bedroom, but the moon and the suburban house are there as well.

OPP: Are the characters you are influenced by archetypes? How often do viewers “get” your cinematic references and does it matter if they don’t?

KS: Archetypes can be found in everyone, and I think about them a lot. No one needs to get a cinema reference, but I usually include the reference in the title or on the backs of the work. If I choose an image from a movie, it is the greater story or meaning that draws me in, so referencing the specific movie is just to pass on the appreciation of what an artist was seeing. I see something in it myself, then pass it on to you. 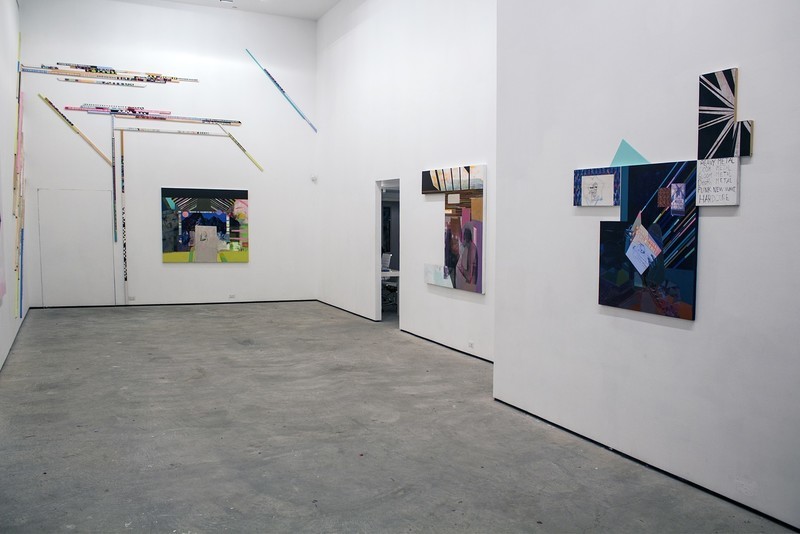 OPP: You've made sculpture and installation work before, but it seems that you broke out of the rectangle, as it specifically relates to painting, in your most recent solo show Spirit Girls at Lu Magnus Gallery. Is this a new direction for you or was it specific to this body of work? What led you there?

KS: This was the first time I installed patterned, colored strips of wood. There were paintings on cut wood panels and some works on canvas. The installation and panels were not a new approach but more like combining groups of sculptural work I've made on layers of painted wood and taking it linear. The show was specific to the Spirit Girls theme. I was literally allowing myself to be super happy and free. I installed the wood patterned strips free-form all the way up and around a two story wall, and I allowed the panels to be in shapes and parts. I had not done that before because I was holding to the tradition of the rectangle-painting space. In the studio now I am pushing more literally into theatrical space. I am printing patterns on fabrics and draping them into a space. The space is a stage I'm setting up for live drawing in a group of artists, and I will see how far I push the next installation. 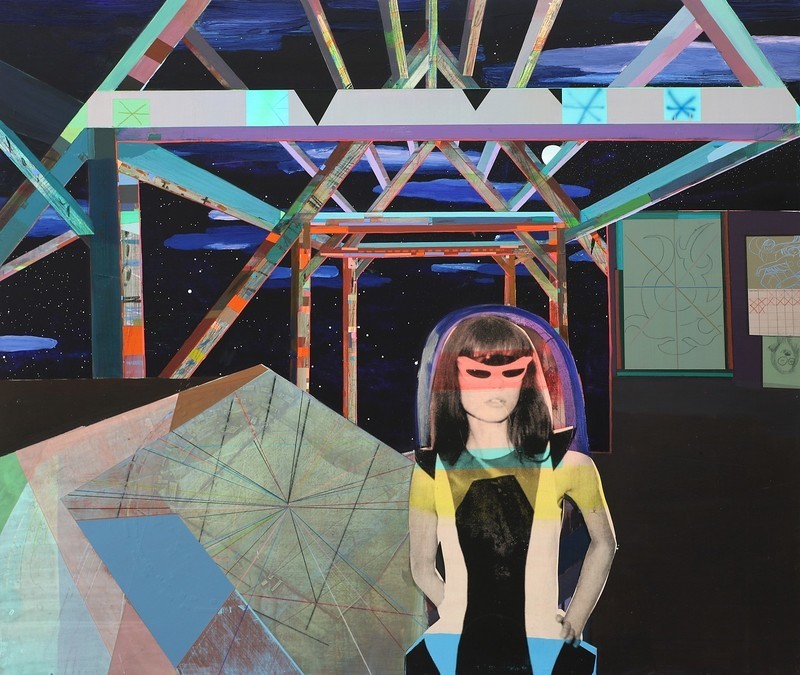 OPP: You exhibit all over the world. Tell us a story about a great experience exhibiting outside of the U.S.

KS: I love showing in Berlin. An opening there means underground bar late nights, a mural painting at 2 am, an art and clothes trade, long talks (trying not to be suffocated by cigarette smoke) and finding new books. The city inspired me to make a studio cooperative in Greenpoint, Brooklyn in order to keep my Brooklyn community as tight. I have old friends in Berlin. We grew up in our 20s together, and they are inspiring with fashion, music, film and painting. Berlin is less expensive, and the government has protections for rent stabilization. I wish we would do the same here in New York. I plan on staying in amazing Brooklyn and going back to spending my summers making work in Berlin. It's ideal! 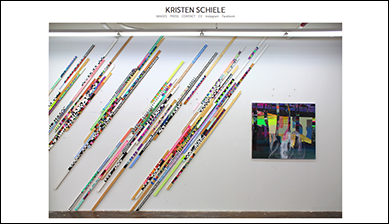