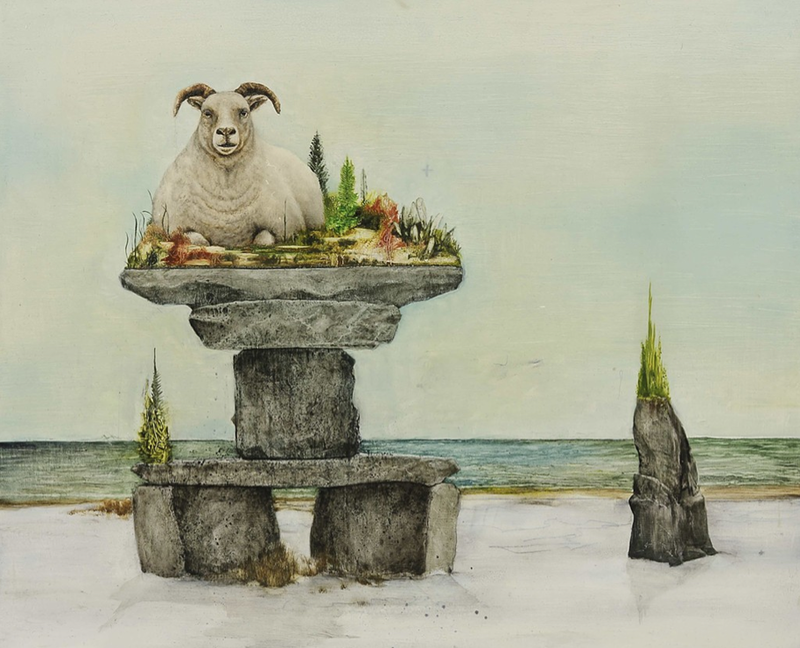 KEVIN EARL TAYLOR's oil paintings are part fantasy, part allegory and part social commentary. He highlights humanity's repeated, misguided manipulation of nature, asking, "how can we relate to animals as beings rather than objects?" Kevin received his BFA from Savannah College of Art and Design in Illustration (1994) and exhibits internationally. His numerous solo exhibitions include shows at Circle Culture in Berlin and Hamburg, Rebekah Jacob Gallery in Charleston, South Carolina and Guerrero Gallery and Eleanor Harwood in San Francisco. His solo show Inner Wilderness at Rebekah Jacob Gallery runs from November 1 to December 31, 2013 with an opening reception on November 14. Kevin lives and works in San Francisco.

OtherPeoplesPixels: My favorite paintings are Sympathetic Situation (2013), Negotiation (2012) and Red Thread IV, which portray interactions between animals that usually don't interact. Sometimes there's potential danger. Sometimes there's a sense of poignant possibility that these animals could be friends. Are these paintings fantasies or allegories?

Kevin Earl Taylor: A bit of both actually. I enjoy a sense of mystery in my paintings, so I’d rather imply a story than tell one. The narrative becomes the abstraction. It's a way of letting the work transform with regard to the viewer. The best way I can explain my approach would be similar to starting a story at the end instead of the beginning. I prefer things to feel somewhat unresolved. It's that type of situation that draws a person in. It's in our nature to want to solve it. When my paintings are most successful, they are making people's minds restless. 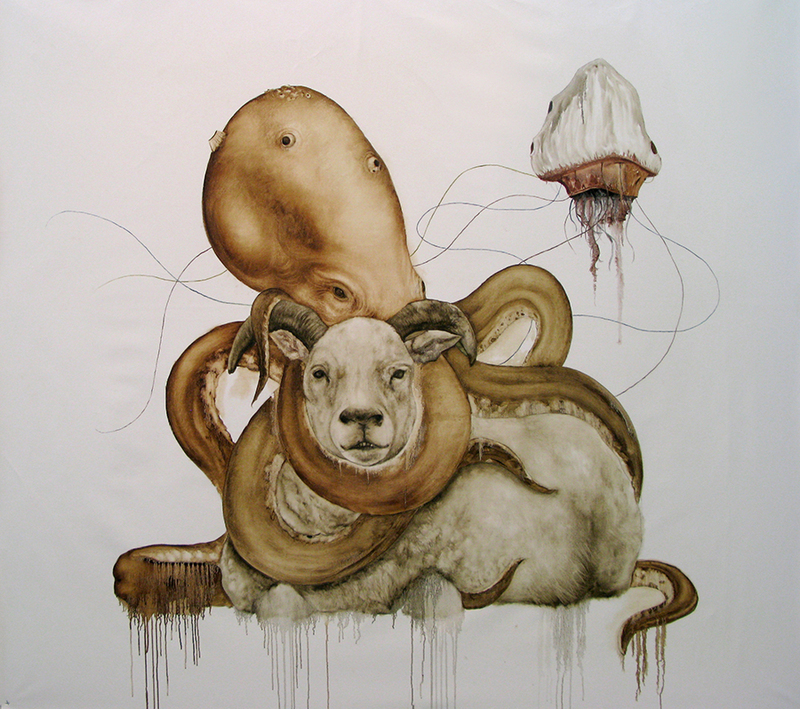 OPP: Animals are often portrayed as objects in many of your paintings. Could you talk about the differences and similarities in pieces where animals are surrounded by scaffolding, as in The Whale Structure (2013), The Chimp Construction (2013)) and The Rhinoceros Construction, and pieces where animals are portrayed as art objects on pedestals, as in Pisces (2013, The Ram Installation (2012) and 23:12:56.78 (2013)?

KET: The scaffolding pieces, or "constructions," reference humanity's ongoing action to dominate, manipulate and reinvent nature. The animals are synthetic, seemingly forgotten and "in progress." They could exist in the not so distant future as relics, initiated during a time which parallels man's own extinction from earth.

The pedestal series presents organic matter as artifact. I was amused by the idea that preserving a thing often requires removing it from its natural environment. We put something in a museum or zoo to appreciate it, making it untouchable, dysfunctional and guarded. I was hoping people might think more about appreciating animals while they still exist in nature.

I've had people feel sympathy for the animals in these paintings, but it's not necessary. The animals in the pedestal and construction works are no more alive than a church or hospital. What these works have in common is the now absent human hand which constructed, plotted and staged the elements within them. They ask us to remove ourselves from the center of our own universe. 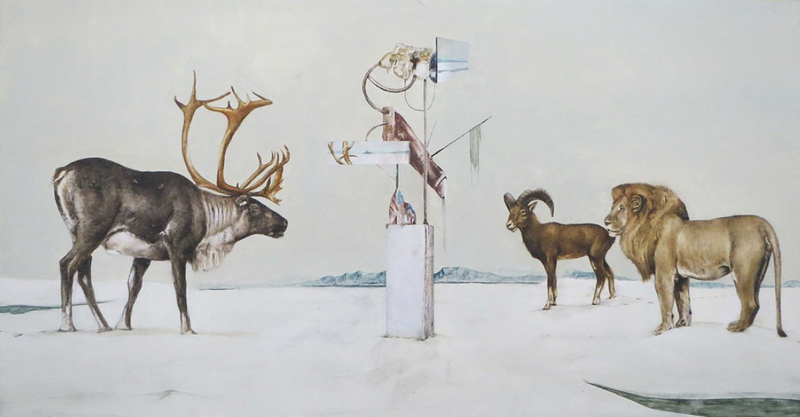 KET: The idea of worship runs through much of my work, but it exists more as a vehicle to focus on things being mesmerized by other things. It's a way to emphasize an admiration between disparate entities.

OPP: Do the animals admire the humans in any of your work, or just each other? Is admiration a necessary part of coexistence?

KET: It's more of an equal respect for one another and their respective roles within the ecosystem. Essentially, I'm trying to dissolve the imaginary boundaries separating humans from nature and coax people to treat everything as an imperative part of the cycle. The more I can twist the characteristics of the diverse elements of nature, the better. It's easy to forget that we too are animals, and our ever increasing separation from the natural world tends to spawn poor decision making. I'd like to think that if we treated our habitat with the same sensitivity as non-human animals do to theirs, we'd consider the consequences of our actions much more than we do presently.

OPP: The very notion of animals as art objects brings to mind Damian Hirst's The Physical Impossibility of Death in the Mind of Someone Living (1991), et al. Whatever this piece was originally about is constantly overshadowed by its price tag, and whatever potential meanings it had are almost shutdown by the spectacle of it. I'd like to put aside speculation on Hirst's intentions and his personality, and think about the work itself. A painting of a dead shark as an object can do something an actual life-size, dead shark cannot, and vice versa. Were you thinking of Hirst's shark at all when you painted Chapel (2013)? Are there any similarities between your piece and his?

KET: I wasn't thinking about Hirst directly when I painted Chapel.However, 03-23-56-48 is another painting from the Pedestal series that references his work directly. For me, it was a way to make the museum scene more "realistic.” As far as similarities within our work, I imagine we're skirting along the same lines; asking questions which challenge the concepts of nature, art and mortality. 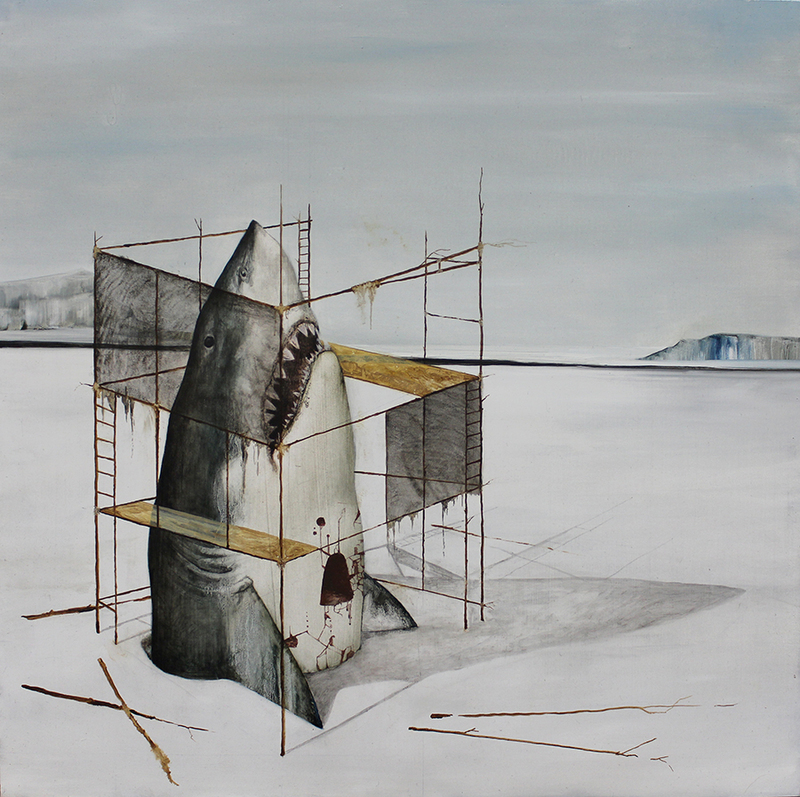 OPP: Many new and emerging artists receive no comprehensive professional practices training, even in graduate school. Even the most practical amongst us has had the fantasy of randomly being discovered and offered a solo exhibition. And that does happen to some artists, but not most. You've had a lot of solo shows, more than one every year since 2005. Can you offer any practical advice or anecdotal experience to younger artists who are seeking solo exhibitions and confused about how to land them?

KET: Persistence and patience. Strive to make unique work for the right reasons and eventually people will take notice. If things aren't happening fast enough, don't get discouraged. You don't want to be in the spotlight when you're not ready. It's hard to recover from something like that. Let things happen organically, so you're always where you're supposed to be, working with people who genuinely believe in what you do. Whatever you do, NEVER be completely satisfied with the work you're making. . . and remember, it's not a contest. If you want to compete, go out for the football team. 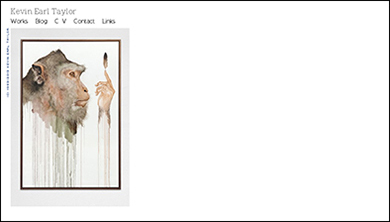 To view more work by Kevin Earl Taylor, please visit kevinearltaylor.com.Featured Artist Interviews are conducted by Chicago-based interdisciplinary artist Stacia Yeapanis. When she’s not writing for OPP, Stacia explores the emotional and spiritual significance of repetition in her cross-stitch embroideries, remix video and collage installations. She is an instructor in the Department of Fiber and Material Studies at The School of the Art Institute of Chicago, where received her MFA in 2006, and was a 2012-2013 Mentor-in-Residence at BOLT in Chicago. Her solo exhibition I Still Haven’t Found What I’m Looking For is on view at Klemm Gallery, Siena Heights University (Adrian, Michigan) until December 6, 2013, and she is currently preparing for another solo exhibition titled Everything You Need is Already Here (Heaven Gallery, Chicago) in January 2014.