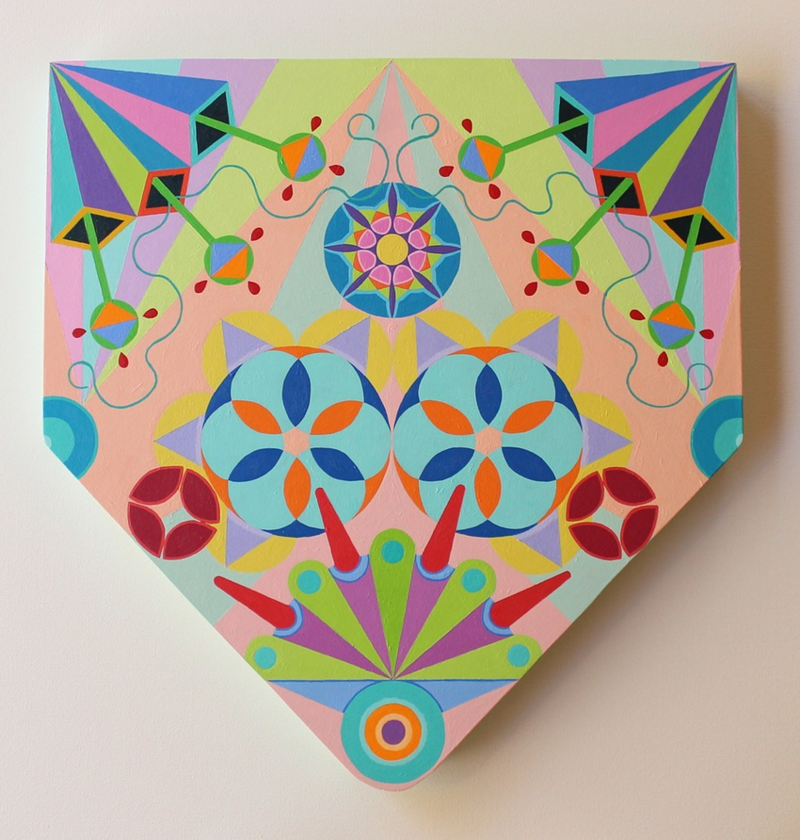 Both figurative and abstract threads run throughout JULIO RODARTE's colorful paintings and illustrations. In work that celebrates sex and pleasure, he counters prudish taboos by rendering the body in geometric abstraction. Other works explore balance, symmetry and the interconnectedness of natural systems through pure, geometrical pattern. Julio earned his Associate Fine Arts degree at Glendale Community College in 2007. He has had solo exhibitions at A.E. England Gallery, Practical Art and the defunct One Voice Community Center, all in Phoenix. Two paintings will be included in Present Tense, a group show that opens on September 1, 2017 at MonOrchid Gallery (Phoenix, Arizona). You can purchase prints of his work here. Julio lives and works in Phoenix, Arizona.

OtherPeoplesPixels: First let’s talk about the queer, sex positive works like Friends Forever (2015) and Sit On It (2014). There’s a lightness, fun and joy in these paintings. Can you talk about how the bodies seem to merge into one another through your use of geometric patterns?

Julio Rodarte: The idea behind this series was to express that sex is not something dirty and perverse. It should be talked about it, rather than kept quiet. I remember when I was taking art classes and going to the museums and looking at these beautiful paintings of couples kissing. Sometimes they were naked, but there were no paintings of sexual intercourse because obviously sex is still a taboo. So, in my life drawing classes I would draw the human body by using shapes. That helped me draw better. By using geometric patterns, shapes and color I made something “dirty” look fun. I want the viewer to engage with my artwork, to take a deep view of what is in front of them. Sometimes people don’t quite get it first until they analyze it deeper and that’s when I know I have succeeded. Friends Forever was quiet a challenge, sometimes colors and shapes don’t get along with others and I go back and change things. The funny part of these works is when people ask me, if I get an erection by working on these type of paintings. I just think to myself “If you only knew all the work I put on it” and laugh. People are funny! 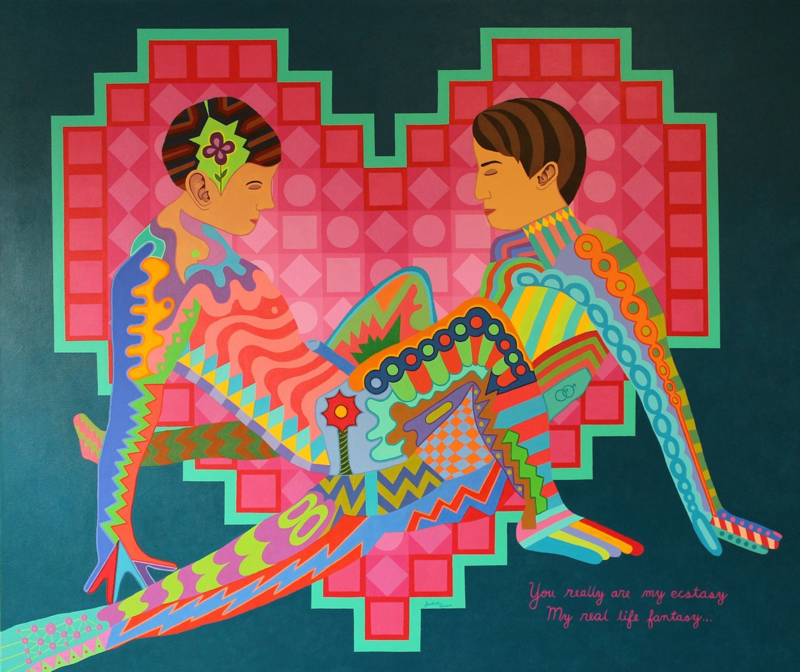 JR: Symmetry is balance and balance is harmony for me. My first experience with symmetry was when I was a kid. My mom would make these beautiful cross-stitched designs for tablecloths or handkerchiefs, mostly flowers. She was so meticulous about her work, she would make in one corner one design and then another. Her work was extremely symmetrical and very addictive. She would use vibrant colors, red, blues, greens, yellow. My mom was my first art teacher, now that I think about it. She taught me beauty and balance. So in college, you explore painting and get to go to museums. I went to the Phoenix Art Museum and there was an Al Held painting on the wall. This painting was gorgeous, more beautiful than any realistic painting there. So when I got home that day I looked online for more of his work and I discovered other artists working in geometric abstraction like Frank Stella, Ellsworth Kelly, Kenneth Noland and artists from Argentina working with geometrics, among many others. Every time I discovered a new artist, I fell more in love with pattern and color and that’s when it hit me that’s what I wanted to do. 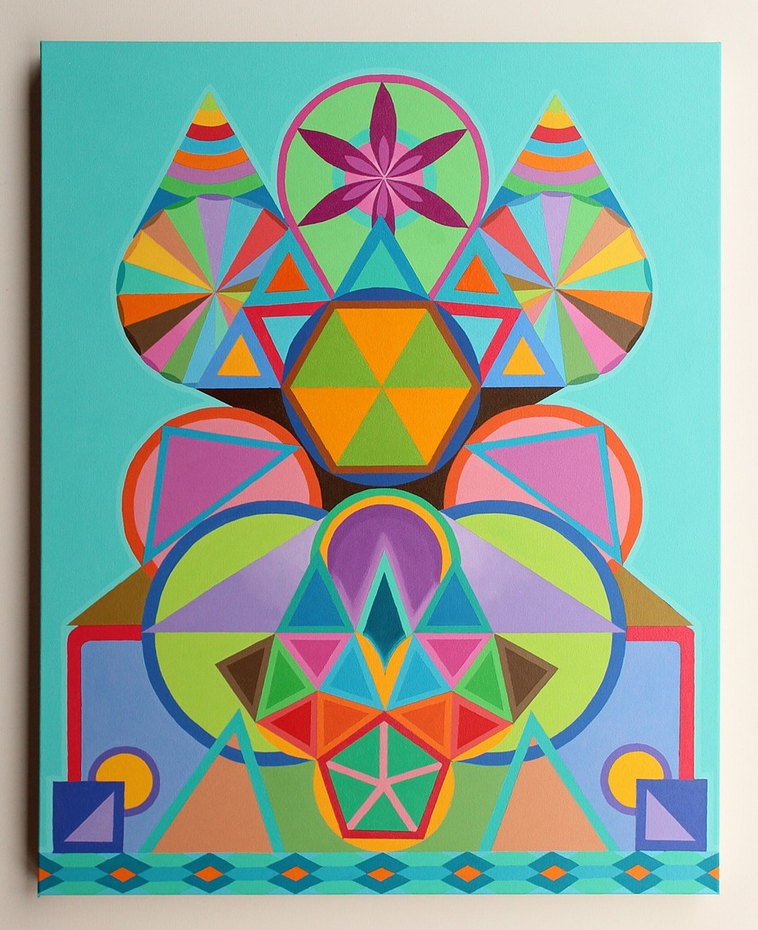 OPP: I can totally see that connection to embroidered tablecloths, especially in When it Ends, It Starts Again (2014). I also see pinball machines, video games and sacred geometry. I was thinking a lot about the presence of sacredness in play and in the everyday. Is this something you are interested in?

JR: I have never been a spiritual person. But I like to listen to a lot of vocal trance music, which in a way is spiritual and very uplifting. I like the progressive beats of this music, the melodic parts which combine vocals from mostly female singers. The title for the painting When It Ends, It Starts Again was actually a title by the DJ ATB from his album Contact released in 2014. My latest painting Miracle Moment was inspired by Andy Duguid's song "Miracle Moments" featuring the vocals of Leah. Parts of the lyrics are in the painting. so I guess vocal trance music is a source of inspiration for me. Some other paintings are also titled after vocal trance songs such as Higher. 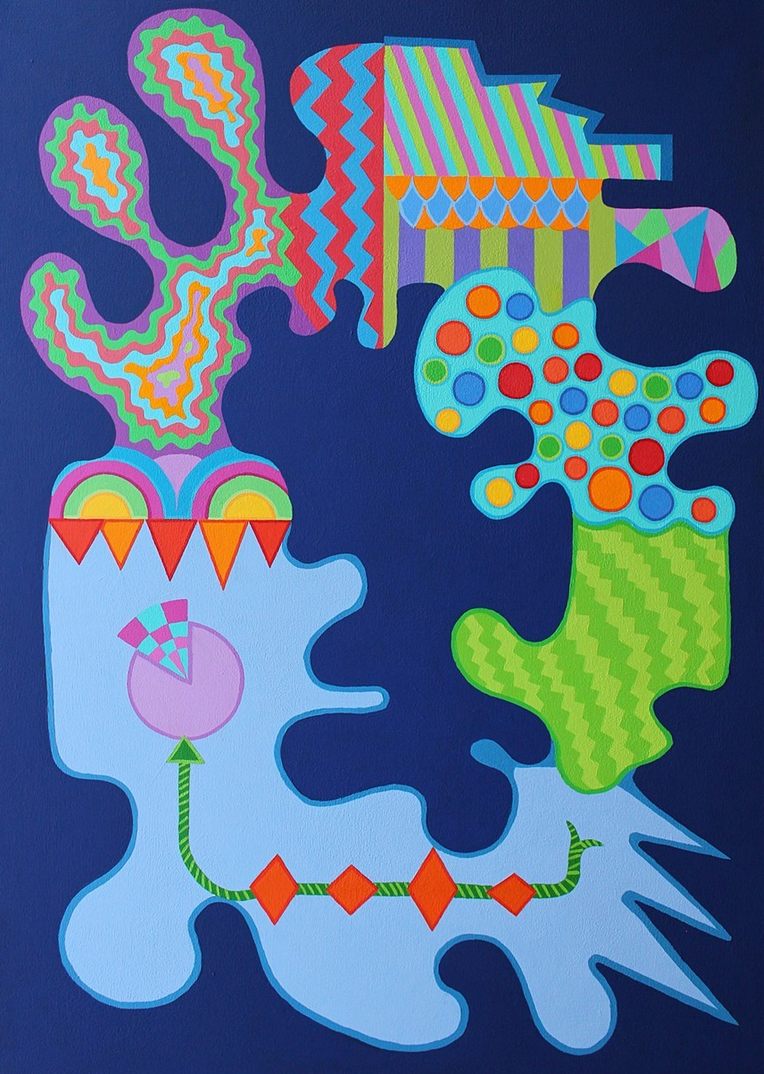 JR: These paintings are so different from the rest. They don’t have symmetry but they have balance. Overenthusiastic was a really hard painting. I was adding pattern on one side but then I would do something on the other side, and it quite didn’t get along. I was going back and forth. Sometimes color helps to balance everything; sometimes it just ruins everything. I didn’t start with a sketch like I did with Together as One and Where Life Begins. Together as One I had a simple linear sketch with no color. So when I was painting it some colors were not getting along. The blue background was initially lighter and it looked awful. I went back and changed that and I decided that it was done. Where life Begins was an interesting process because it went by so fast. I knew how the outcome was going to look because I did my preparatory work. I didn’t go on an adventure like with Overenthusiastic.

OPP: Can you talk a bit about the imagery in Together as One and Where Life Begins? These aren’t entirely abstract.


JR: Together as One is a painting inspired by connectivity. The first sketch I did was very similar to the final result. It was a very spontaneous drawing on a sunny day in Phoenix by the pool. I used to go tanning by swimming pool and take my sketchbook. I would draw nonsense drawings. Some never survived, but others like this one did. I guess I tend to relate how all things in this world all connected somehow. As for Where LIfe Begins is a painting that deals with nature and how it hangs on to survive in a very busy world full of human construction. I have a geometrical-looking star that represents the sun, a cloud watering three plants that represents nature and life. An empty building that symbolizes the darkness in humans and how we destroy natural beauty with the things we make and expand. 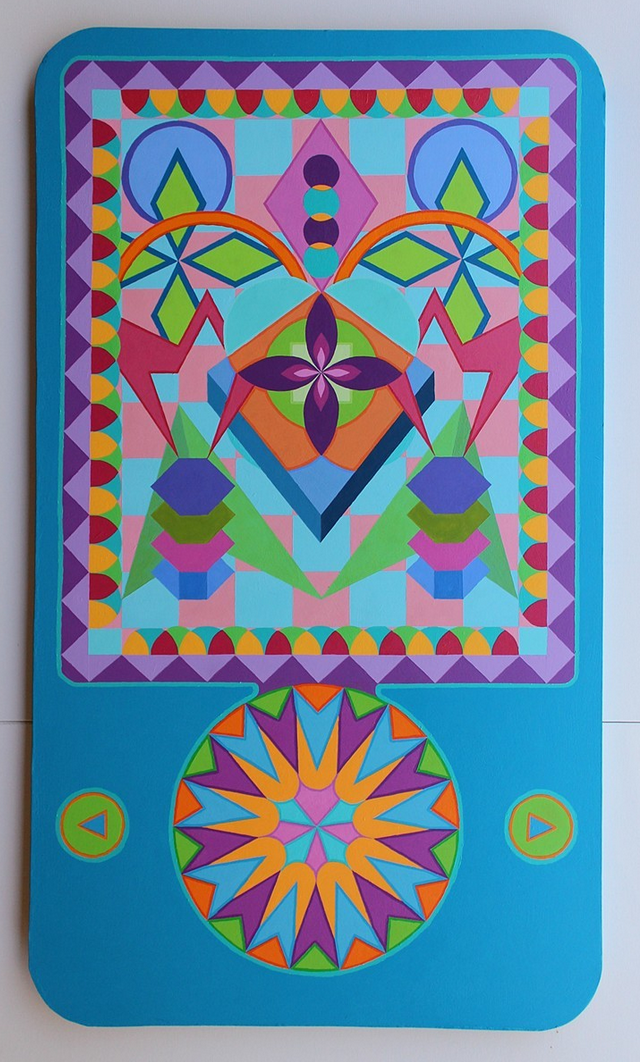 OPP: When and why did you first begin painting on shaped canvases? What makes you choose the conventional rectangle for some pieces and a shaped canvas for others?

JR: My first shaped painting was This or That Way? created in 2008 after discovering Elizabeth Murray, who’s artwork deeply impacted me. She inspired me a lot to be wild and adventurous. So I went to the woodworkers store bought my self some big pieces of MDF. I drew shapes, cut them carefully, assembled and gessoed them, and started to draw. It was a very spontaneous process but very detail-oriented. In 2010, I had my first show at Practical Art. The show was titled Shapes and it included all these shaped paintings. It was quite an experience and a very successful. Overenthusiastic was the last shaped painting I did, and the reason why is because I have not bought anymore MDF and cut new shapes. But I have a sketchbook full of shaped paintings I want to do, I just need a day or two to fully do all of these. If I don’t do it at once, I just not gonna do it because it’s time consuming just to prepare the surface. 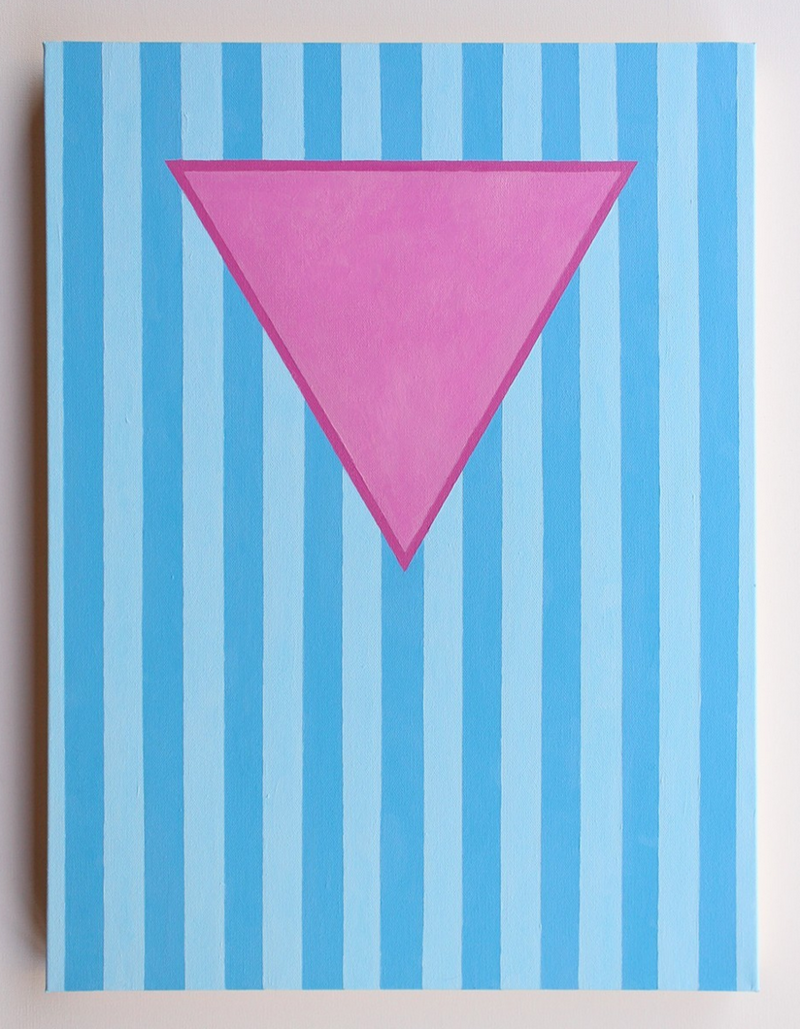 OPP: One of your newest works is 1937—Pink Triangle (2017), referencing the pink triangles homosexuals were forced to wear in Nazi concentration camps. Why paint this right now? Do any contemporary viewers not get the reference and simply see this as abstraction?

JR: You know, I was invited to participate in a show about the LGBTQ history organized by the Phoenix Public Library back in March. The show was titled LGBTQ: Rights and Justice. Looking at what the other artists were putting together, I realized that we were omitting gays that were put in concentration camps, humiliated, raped, starved and murdered. I needed to paint that Pink Triangle that identified them from the rest. People were taking pictures of it. I think most people know what that symbol means, even young generations. But my painting was meant to be more educational than artistic. Somebody offered me money for it, but I didn’t sell it. I won’t make money from the pain of others. 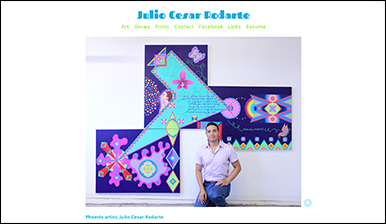