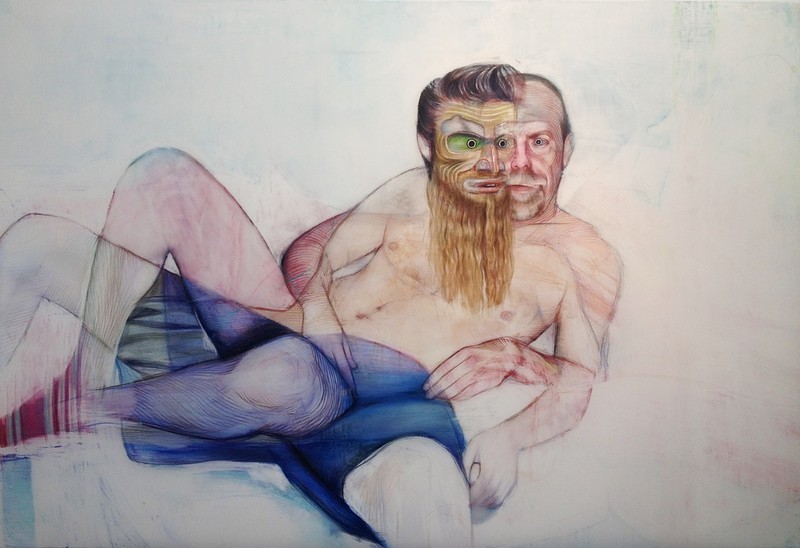 GEOFFREY CHADSEY’s watercolor portraits on Mylar are amalgams of found images from chat rooms and hook-up sites geared toward men seeking men. His poignant and provocative drawings reveal both the specificity of their source material and the universality of donning plumage—in the form of performances of gender, race, persona and cultural affinity—to make ourselves more desirable and to communicate our availability to others. Geoffrey received his MFA from California College of Arts in 1996 and was awarded the prestigious Eureka Fleishhacker Fellowship in 1999. His numerous solo exhibitions include shows at James Harris Gallery (Seattle), Jack Shainman Gallery (New York) and The Contemporary Museum, now part of the Honolulu Museum of Art. His work will be included in the group show, Drawingroom, which opens March 7, 2014 at Galerie im Taxispalais in Innsbruck, Austria. The exhibition, curated by Peter Weiermair, will travel from Ursula Blickle Stiftung in Stuttgart, Germany, where it was shown in December 2013. Geoff lives and works in Brooklyn.

OtherPeoplesPixels: Do you consider these drawings to be portraits of individuals?

Geoff Chadsey: Each drawing is a portrait of individuals, plural. They are composites of photos taken from a number of social media sites—other peoples’ self-portraits (or should I say, Other People’s Pixels?)—that are further fleshed out with my own photo studies and images ripped from magazines. I spend so much time on them that they feel imbued with personhood. Frankenstein’s monster, but without the creator's god-complex or nature-challenging hubris? 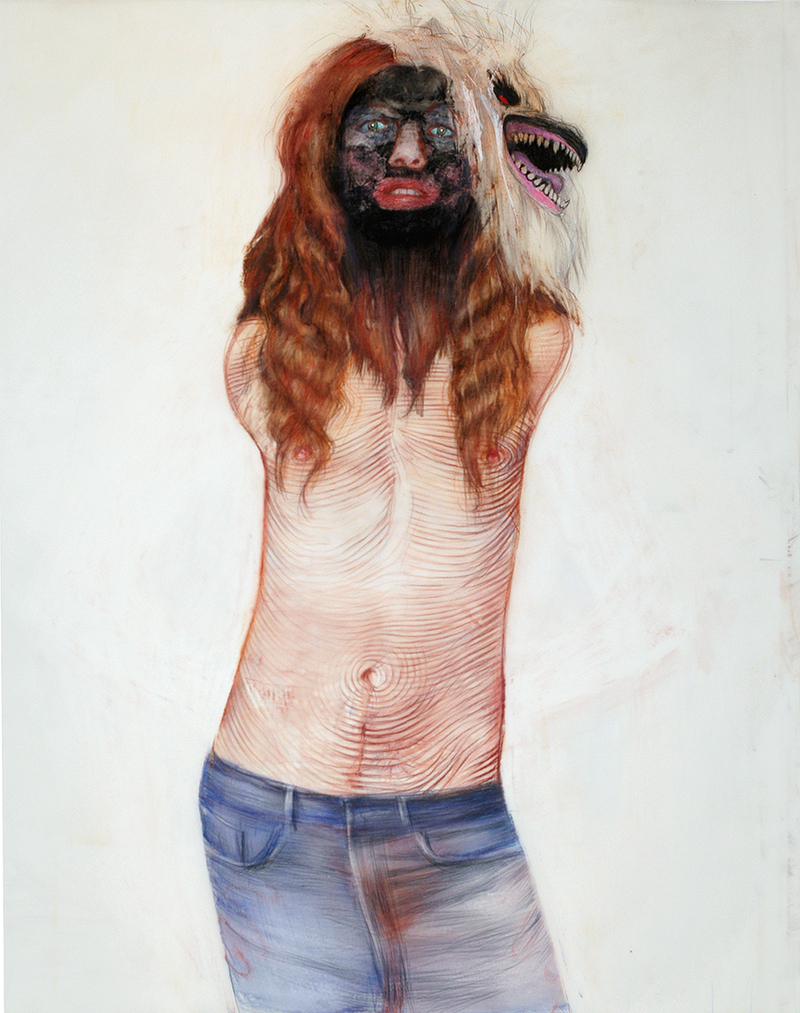 OPP: The morphing of figures and the presence of multiple heads/arms/bodies is a richly compelling aspect of your drawings, and it seems to be used to different ends throughout your practice. Sometimes the extra body parts evoke potential motion, as with Reacher (2012) and Reacher, revisited (2013). In works like Vestigial Velasquez (2011) and Portrait (Pink Beak) (2011), I read the second face as representing a buried part of the personality trying to escape. Visually these remind me most of horror movie effects used when someone is possessed. Tinchy Klimt (2011) brings up the idea that our own personalities contain distinct elements of the surrounding culture, i.e. hip hop and fine art. I could go on and on—I haven't even mentioned Hindu deities! What does this hybridity of form and body mean to you?

GC: I have no grand narrative. I am no great revelator, although I enjoy and agree with your readings. I pursue the uncanny, but as a wary surrealist, who is suspicious of images that beg interpretation or that try to look weird or provocative. The multiple poses, limbs and faces—pentimenti—render indecision into full form. I read a review of a friend's show, which described her paintings as portraits of people who couldn’t make up their minds about who they wanted to be. That description of multiplicity, confusion, playfulness of identities delighted me. That's what the internet was supposed to be about when it became a popular medium. People were talking about how you could reinvent yourself in chat rooms and be whoever you wanted to be. It was supposed to be a post-identity space. Instead, people have become even more entrenched in their identifications of who they'd like to be—and who they'd like to be with.

The added limbs, faces and traces of previous poses also add distance between my drawings and the unseen source material of the screen and its frozen image. They add a physicality to the figure, as well as movement and the passage of time. Reacher, which quotes a Sports Illustrated basketball cover, and Marines, which evokes Leonardo da Vinci’s Vitruvian Man, both read like dance. Portrait (Pink Beak), a self-portrait, reminds me of spirit photography; the vulpine mask came from a moment of wanting to just SCRIBBLE. Tinchy Klimt is a melding of two common source materials for me: hip-hop and Klimt. There is no reason for it, other than those are images I am repeatedly drawn to: the riveting swagger, the rancid glamor, the spectre of murder. Theater, basically. Popular metaphor of the mask is about hiding, artifice, fakery. Popular psychology is about removing the mask, revealing the true self. But masks enable action. Giorgio Agamben writes that, “‘Persona’ originally means ‘mask’ and it is through the mask that the individual acquires a role and a social identity." He goes further to describe how, in the online era, this mask gets separated from the individual as a profile of online behavior, purchases and likes. Data mining companies collect this information in order to present further enticements or calls-to-action to the individual. You are what you “like.”

In online chat-rooms, you can see how men increasingly identify themselves with costumes that indicate a masculine archetype: the straight-acting (an overtly theatrical role that requires great skills in projecting illegibility), the jock, the leather-daddy, the preppy/ Abercrombie-and-Fitch collegiate, the scruffy urban-woodsman, the executive, the thugster, the punk. Each one calls out to other lovingly-detailed archetypes for a meeting of the masks. The hybridity in the drawings is about pursuing identities that aren't easily summarized as racial, gender, personality types. 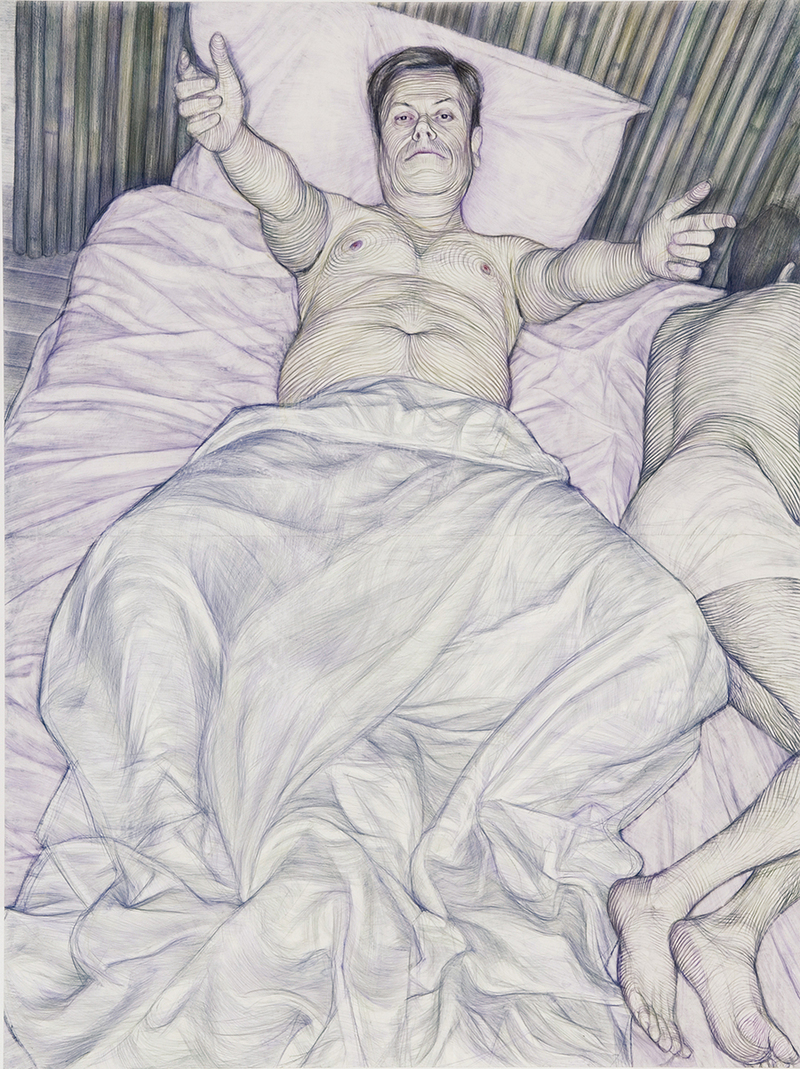 A Sure Thing
2003
Watercolor pencil on Mylar

OPP: I've read that many drawings are based on images from Grindr, an iPhone app for meeting "gay, bi, and curious guys" and other internet chat sites, although they aren't identified that way on your website. For me, knowing this source adds a distinct layer of longing to connect and to belong that might not be otherwise present in the drawings of single figures. Would these drawings be the same if you drew these figures from life? How important is the source material to you?

GC: “Curious”—isn’t that hopeful? Yes, Grindr is one source, Manhunt another. I have an archive of photographs from sites I have been collecting for over 10 years. I’ve been an active participant in these sites, by the way. These images are about longing and the self-presentation that goes into being longed-for. Men post themselves in an online bazaar to a fantasized other; it’s a peacock gallery. Maybe that’s the discomfort of these drawings. Here is a figure presenting himself to you. You are an implied part of the drawing. He is looking out at you, he is looking FOR you, but you are also not the original intended audience.

Someone asked me a few years ago if there was any empathy in these renderings. It’s complicated. While looking at so many beautiful men online, I find myself collecting the photographs where the performances are wonky. There’s some sort of excess that disrupts the aspiring hotness factor, like a bulging belly or an overenthusiastic hairdo. Empathy and delight enter in those moments. Popular gay iconography is all about desirability: beauty, youth, the fitness factor. I seek to capture a more disruptive figure, something you can’t take your eyes off of, something disorienting, alien, horrific like a movie monster that rivets the gaze. Let’s call it the aspirational abject. 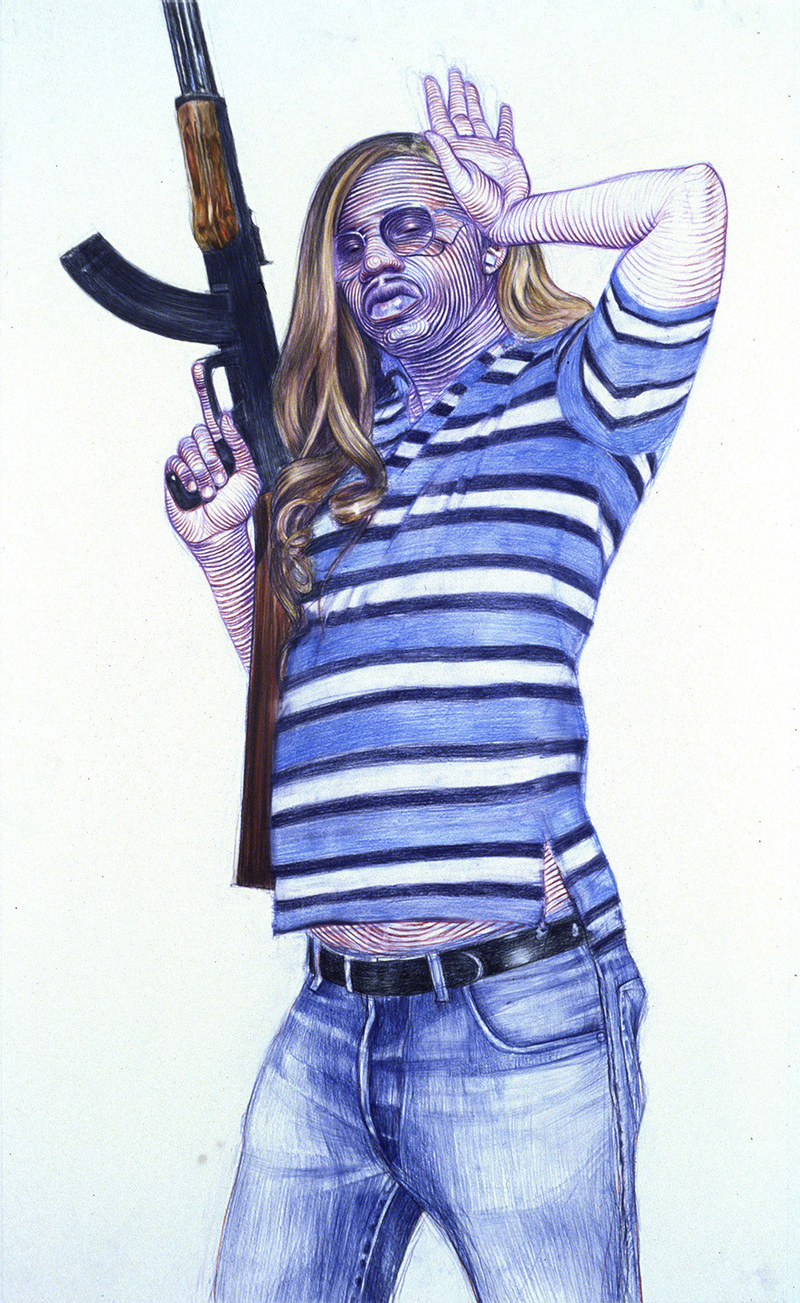 OPP: All your drawings are watercolor pencil on Mylar. Why do you choose it? Is there anything about your work in this medium that doesn't translate well online? What are we missing as online viewers?

GC: The image ecology from screen to Mylar back to screen is largely how my work is seen these days. I joke that I am represented by the gallery called Facebook, and they give me a show whenever I want. It’s fun to gather "likes" and to see your work bounce around Tumblr. But the jpegs are pale ghosts of their originals—you miss the WORK involved in making it, the physicality of the line, the painterly goop of the melted scribbles, not to mention the size (some of these drawings are six feet tall). So then the question becomes: why draw? I have a Masters in photography, but I drew my thesis show. Call it digested photography, a reconstituted archive. Drawing is a sentimental attachment to the personal mark, to the mastery of the rendered copy and to the intimate privacy of mulling over images alone in my studio. 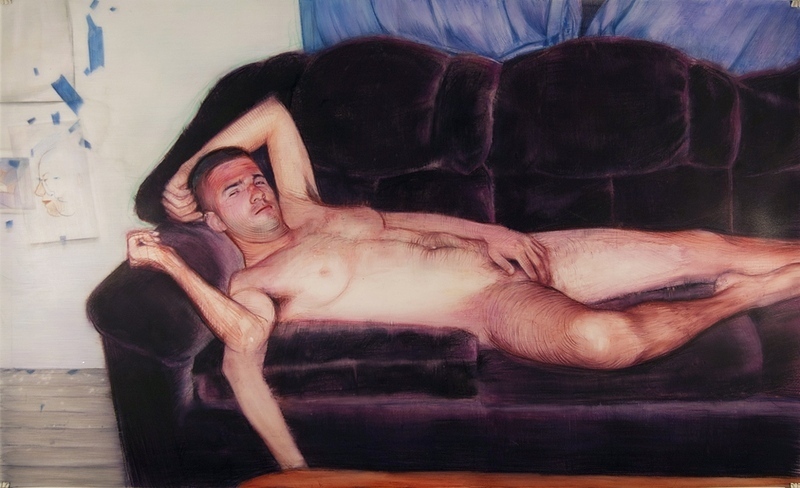 OPP: You are a 2013-2014 Mentor at Queer | Art | Mentorship, which is an organization dedicated to "pairing and supporting mentorship between queer working artists in New York City." Will you tell us a little about the program and why you decided to become a mentor?

GC: The program is about nurturing conversations between (roughly) two generations of participating gay male and female creatives. Because of homophobia, the closet and a generation lost to AIDS, these relationships have to be sought out, created and fostered outside of the university. This is my second year participating. Each generation of gay youth coming into their own has perhaps less baggage than the generation before. The generation before meanwhile has accrued experiences that might be summed up as wisdom—not just about being a thriving gay adult but about being a working artist in New York. The mentorship is about an exchange of ideas, readings, film recommendations, critiques. My participation comes from a desire to integrate my practice into a larger community, to share and receive new ideas about what it means to be queer today. 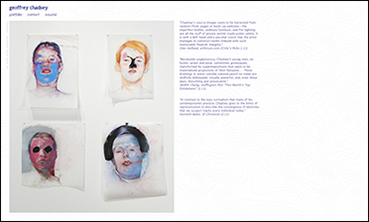