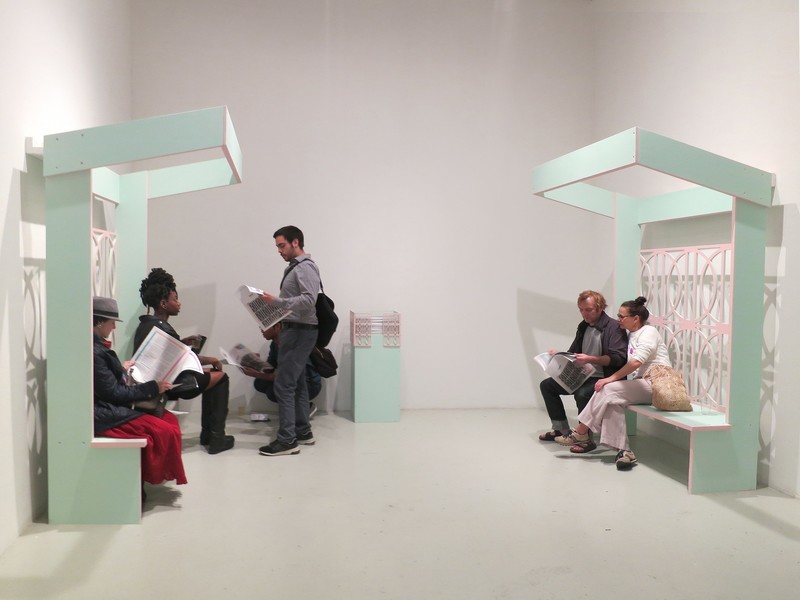 Influenced by her upbringing in Puerto Rico, EDRA SOTO explores the cultural, symbolic and historical meanings of vernacular patterns and objects. Her projects often have multiple iterations and require audience-participation to be truly activated; participants read the newspapers at the rejas-adorned "bus stops" in GRAFT, play dominoes in Dominodomino (2015) or consume pineapple upside-down cake in The Wedding Cake Project (2009-ongoing). By merging research with autobiography and audience-participation, she reveals the intersection of the individual with the collective. Edra earned her MFA at The School of the Art Institute of Chicago in 2000. She's also an alum of Skowhegan School of Painting and Sculpture, Beta-Local in Puerto Rico, and most recently the Robert Rauschenberg Residency. Her numerous 2016 exhibitions include There was no joy in the brilliance of sunshine at Efrain Lopez Gallery (Chicago), Relocating Techniques at Corner (Chicago) and the Elmhurst Art Museum Biennial: Chicago Statement (Elmhurst, Illinois). In August 2016, her work will be included in Poor and Needy: The Great Poor Farm Experiment IIX, curated by Lise Haller Baggesen and Yvette Brackmanin. Along with her husband Dan Sullivan, Edra runs The Franklin, an outdoor project space in Chicago. Her GRAFT project will be featured at the Western Avenue stop on the train line to O’Hare Airport in Chicago, where she lives and works.

OtherPeoplesPixels: Pattern and ornamentation are major players in your practice. How do you think about them, how do you use them and what would you like to add to the conversation around them?

Edra Soto: I think about patterns as markers of specific cultures. Nowadays, I cannot look at a pattern without wondering about its place of origin, and if appropriated, how it has been appropriated. Perhaps these are the most frustrating times, were there are no boundaries for what it’s being consumed. Going to retail establishments and seeing patterns used indiscriminately is somewhat disconcerting. Like any other mark or gestural representation, patterns have owners and places of origin.

My architectural intervention GRAFT presents representations of rejas (fence in Spanish) patterns that come from Puerto Rican domestic architecture. I create architectural interventions rather than turning them into sculptural objects in order to preserve the integrity of those patters. This way, I avoid turning them into some kind of merchandise with a commercial destination or retail value. In my pretend gesture, I symbolically transplant a portion of the Puerto Rican visual landscape into American territory, as if I was playing the role of the settler. Puerto Rican middle class cement houses and rejas pattern designers were presumed to be the creation of slaves brought to Puerto Rico by the Spanish conquistadors in the 1500s. An essay titled Comparative + Studies based on hypothesis, The African influence in the built-up Environment of Puerto Rico, author Jorge Ortiz Colom, attributes authorship of the fractal patterns to African slaves from the the republic of Ghana that were brought to Puerto Rico for free labor. The patterns are associated with the Adinkras visual symbols created by the Ashanty region in West Africa.

The rampant inner racism in the Caribbean makes me think that it is possible that there’s no populous knowledge of the origins the rejas because of racial discrimination. Spanish architecture is something that people can talk about and that is studied in high school; the rejas on the other hand are not a part of that roster of things we get to learn in high school. You have to be an artist or a scholar, go into research to learn about the African influence in domestic architecture. To me, this is a true motivator that gives value to these important piece of domestic architecture that defines Puerto Rican’s visual landscape. 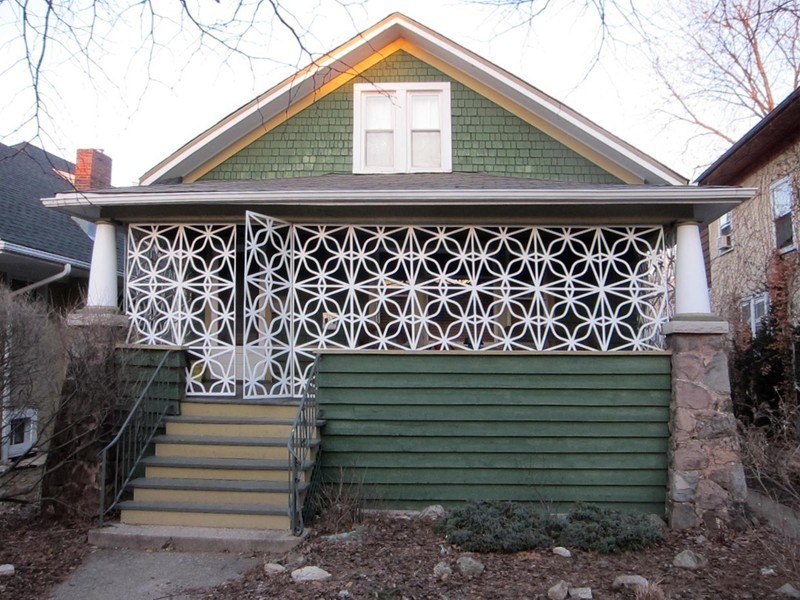 OPP: Does recontextualizing the rejas from Puerto Rico in mainland U.S. cities ever run the risk of misrepresenting? Do you ever fear the contemporary cultural default to see the patterns as a surface instead of a language?

ES: Yes, it does run that risk. It is up to me to inform through my work the best way I can. I believe in these patterns because they provide an easy entrance to deeper issues of race and class. The hybridization that the patterns have already gone through makes them more relevant in relation to popular visual language (or visual access). They are already inserted in the commercial market. It is up to me to inform viewers about their origin through critical thinking and conceptual analysis. To this point, the extension of GRAFT invites writers from various disciplines (architecture, history, sociology, politics, poetry) to explore the rejas through their respective fields. Other extensions of GRAFT are in the works. This project becomes more and more fascinating to me as time goes by. It takes me time to learn about the projects I undertake. Through lots of reflection, research and conversations I have found motivation and inspiration to continue the course of GRAFT. 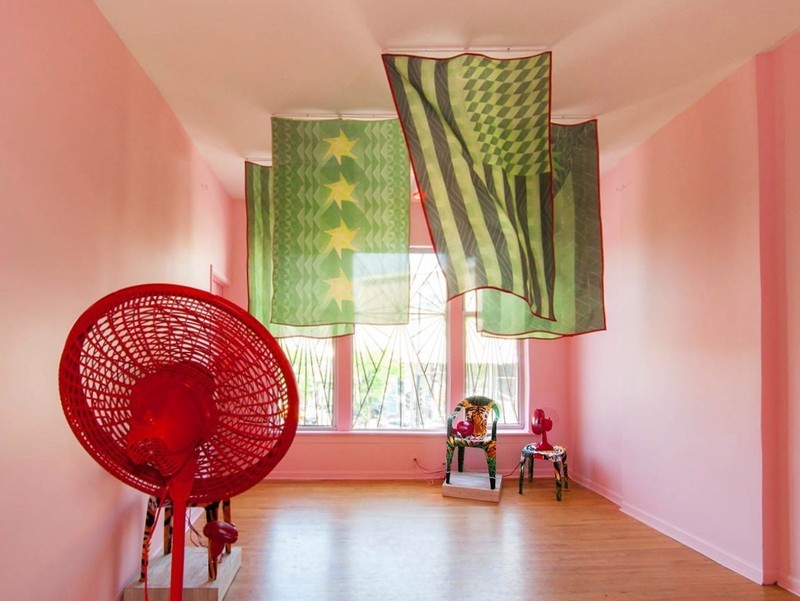 OPP: Can you talk about your use of fans in the Tropicalamerican installations and Say Everything? Besides their practical function of moving air in the space to activate the hanging flags, what other symbolic, conceptual or formal functions do they serve?

ES: Say Everything responds to a personal experience in an outdoor setting. I was fortunate to attend the Robert Rauschenberg residency earlier that year and develop most of the work of Say Everything there. I tried to recreate my outdoor experience in the domestic gallery space. I took in consideration the interior architecture and decorative elements of the domestic space and assign roles to the various objects / elements that I included in my installation. A series of flags titled Tropicalamerican, embody the natural environment. In the middle of the room, in portrait position, they try to resemble trees; a series of chairs upholstered with beach towels resembles four legged animals; the fans represented the wind and animated the space with movement. It was a colorful and playful reverse role play: artificial versus natural environment. 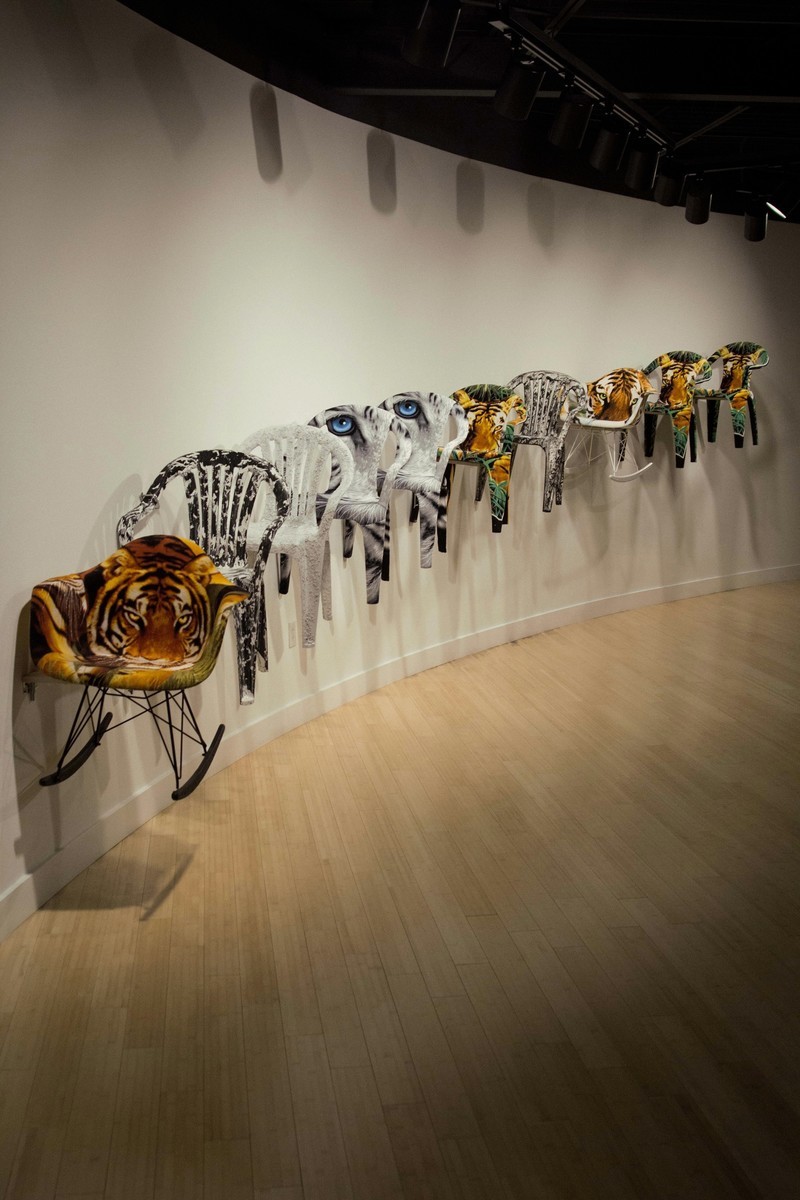 OPP: The clay spirals from Figures (2013-ongoing) have been exhibited on shelves with fluorescent light, on a circular slab of concrete, underneath a staircase, and on what looks to be a domestic tchotchke shelf. Can you talk about the flexibility of installation in this project?

ES: Perhaps opposite in its intention, I think of Figures as my response to the commercial market. What triggered my interest in Figures was the idea of making an object that comes out of a single coil. The coil is the most basic shape in building a ceramic form. The coil is the starter of something that possibly will be functional. I was teaching high school art at that time, and teaching a skill always opened up an opportunity to create something. This was one of those opportunities. I had never worked with air dry clay before. It’s a technological miracle: truly easy to work with, very clean and possible indestructible. My focus was to create an object that resembles a shell. Shells are protectors of organisms. Closer to home, they are popularly seen as Caribbean souvenirs. Displays are interesting because they can alter the connotation of the object, changing it from mass-produced to an artifact, from an archival object to one of spiritual connotations. I think about display forms as the providers of the environment we want to create for the work we make. 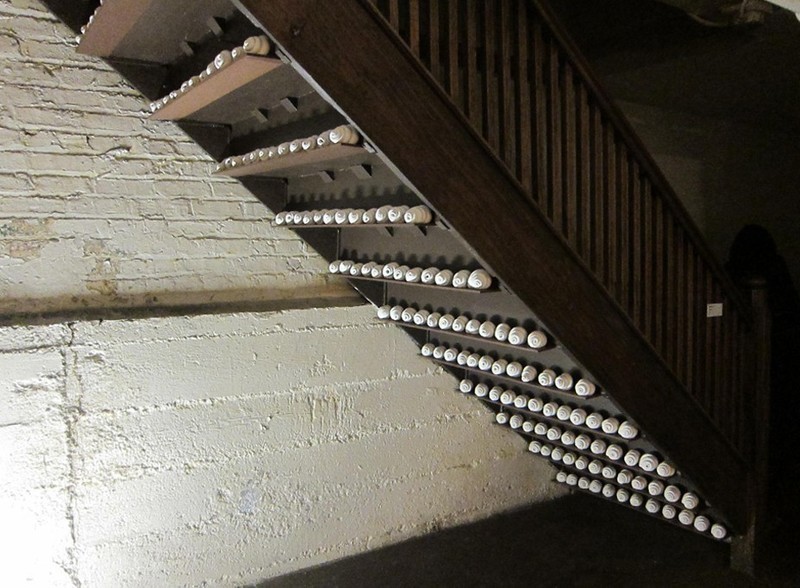 OPP: You recently co-curated—with Josue Pellot—Present Standard for the Chicago Cultural Center. The show featured 25 contemporary, US-based Latinx artists. It was fantastic and received a lot of press. And The Franklin is now a staple Chicago venue. Tell us about your first experiences as a curator.

ES: When I was a student in Puerto Rico, I was obsessed with the idea of bringing different disciplines together into my work. I was studying at a conservative college where painting and sculpture were the validated forms of art. Performance and installation were too advanced at that time. After my first year at SAIC in Chicago, I developed the confidence to explore various disciplines in a single project. The I Love Chicago Project was my first multidisciplinary installation project. I invited friends who were musicians and  performance and sound artists to perform in my SAIC studio. I was also very curious about what other artists were making. While walking around SAIC artists’ studios, I started putting together ideas and associating their respective projects, to the point of feeling convinced that they will speak to a greater audience if they were together in one single space. This led me to my first curatorial project titled Glam Salon at the Student Union Gallery (SUG), a somewhat neglected space in a very desirable spot on campus, right in between the School and the Museum of the Art Institute. The SUG was not popular at the time (not sure why), and I saw that as an opportunity to remind other students of what is available to them. Michael X Ryan was the professor at that time in charge of this space, and I will always be grateful for his support and excitement for my project. He was very serious and intimidating to me, but very supportive to students.

The Franklin consolidates many attempts, many sculptural and performance projects that intended to bring different disciplines and audiences to a singular space or situation. The Franklin also allows me to give visibility and space to the communities of artists that need it, and it's an opportunity for me to showcase work by artists or curators that I have met throughout the years. One great thing about The Franklin is that it is at my home, a place I truly love. It makes things easier. 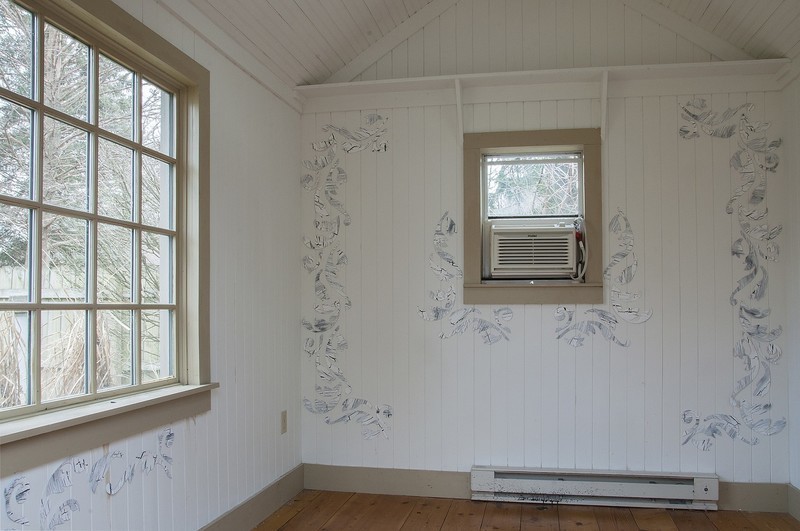 It's Been A Very Good Year, 2016
Installation
Painted fragments on paper

OPP: What’s challenging about balancing the roles of curator and artist? What’s beneficial?

ES: The greatest challenge of curating while maintaining your career is time. Managing how much time things take in the making, the networking, the organizing departments. . . it is difficult to balance. As long as it feels that it comes from a real place to me, I will pursue it. Being organized doesn’t come naturally to me. At some point I realized that I will be my own administrator and that in order to make things work I need to be organized. Providing artists opportunities for exposure allows me to balance my career, which at many times feels so self-centered. 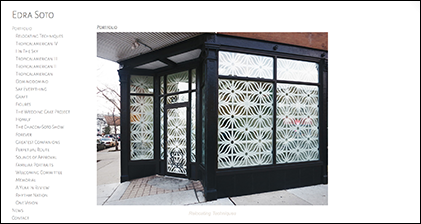