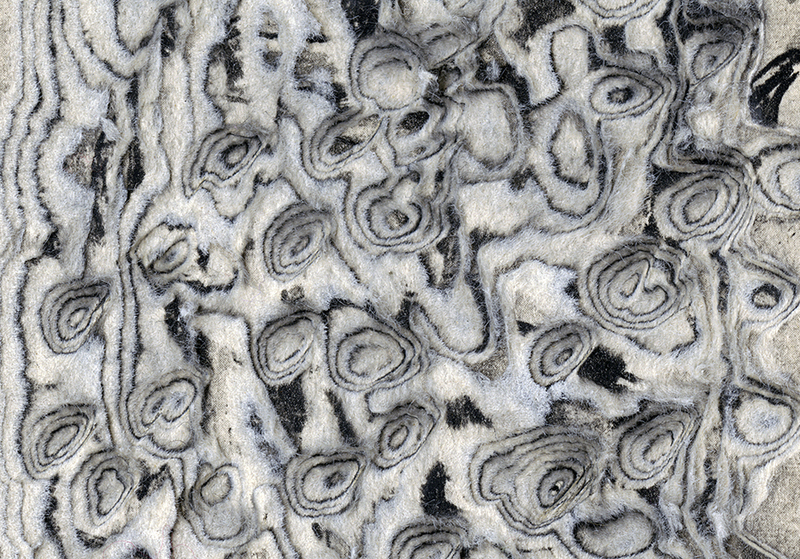 A book is both an object and a transmitter of information. For the last 34 years, artist DOUG BEUBE has transformed this "seemingly antiquated technology" into sculpture and collage. He cuts, folds, gouges and rearranges the contents of each tome, stretching the limits of its form and calling attention to the incidental juxtapositions of text and image in various genres, including the novel, the art-historical text and the reference book. Doug lectures internationally and acted as curator and consultant for The Allan Chasanoff Bookwork Collection from 1993-2013. In 2011, he self-published a comprehensive monograph with numerous essays by critics and curators titled Doug Beube: Breaking the Codex. His two upcoming solo exhibitions open in October of 2014: Codex at BravinLee Programs and Emendations at Christopher Henry Gallery, both in New York. Doug lives and works in Brooklyn.

OtherPeoplesPixels: You received a BFA in Film and an MFA in Photography. Did your early interest in the moving image and the image frozen in time lead organically into your sculpture and collage made from altered books?

Doug Beube: My photography ranges from social documentary to a formal exploration of visual phenomenon, i.e. how recognizable objects are collapsed into a two-dimensional plane as light and dark forms. The transition to collage and bookwork was an organic move. When I look at how I composed my early photographs, I notice certain abiding preoccupations: the compression of foregrounds and backgrounds, the construction and deconstruction of sequences, the repetitive use of forms, images and actions. These repeated gestures show up across separate artifacts and formal systems but also from one medium to another, verging on an obsessive compulsion. For example, the composite photographs like AloeVera: Negative/Positive (1980/1993) were created just as I was turning to collage and bookwork. They emphasize the negative spaces connecting primary objects in the illusory flat plane. In later pieces like A Passion Play (1995) and Masters in Art (2009), I carve and deface that same two-dimensional plane, creating negative spaces through such erasures. 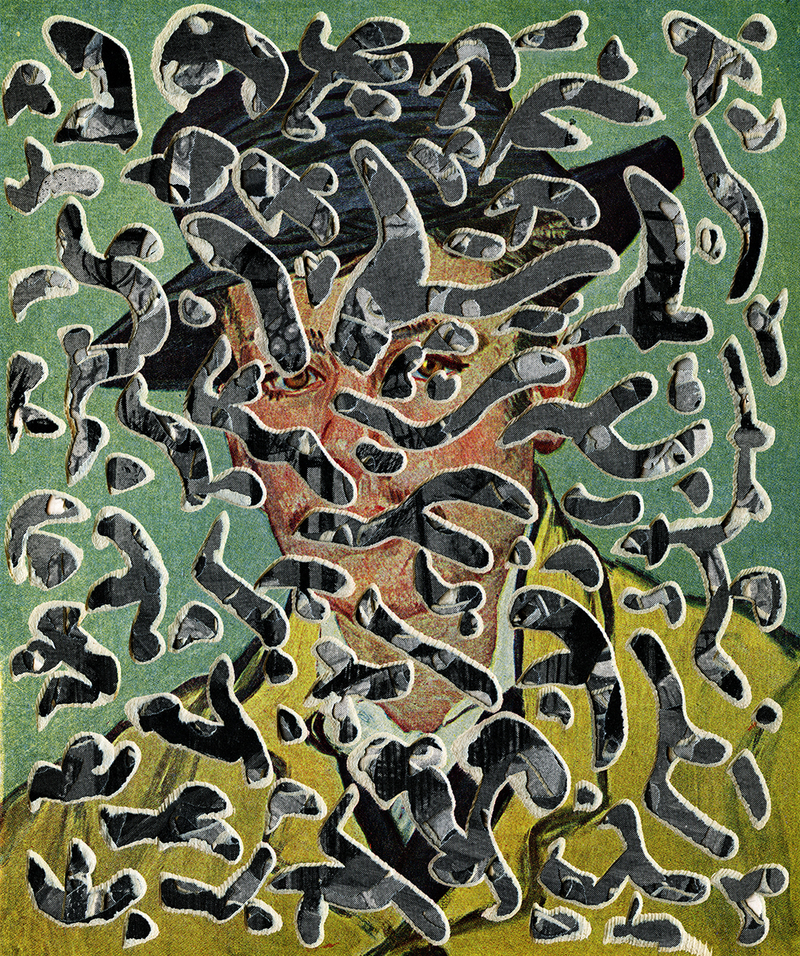 OPP: You are certainly a biblioclast, in the literal sense of the word, but are you also a bibliophile?

DB: I have a love-hate relationship with the medium of my art. I love the collection of concrete words in a book and the rich history of global inventiveness in binding pages and ideas in fixed margins. I love the heft of a book’s pages, the exposition, the narrative, the linearity and curvature of a story, the unfolding of a point of view, the simplicity and even the assumed preciousness of this object. Yet, its technology is outmoded in this digital era. As a method for recording, preserving and transmitting culture and information, it’s frustrating. On my Mac, I can delve into ideas with a series of clicks. I can drill down through websites into an almost infinite library of human expression. I can reshape, rearrange, erase and restore, at will. All such acts, so intrinsic to digital technologies and so unnatural to books, are nevertheless what I am driven in my art to do.

The codex, with the span of its body and its spine, is a metaphor for the human form. With its story, it is a metaphor for human expression and an artifact of civilization. Like a physician or an archeologist, I am driven to examine it, to dissect it, to cut it open, to dig into it. I am compelled to unfix margins, make tomes weightless, empty volumes of their stories and twist a point of view into its opposite.

When I select books for particular pieces, I’m standing on the shoulders of giants.  I use the author’s work, held between the covers, to reveal my own story. Up-cycling and re-purposing the book pays tribute to the original author’s title, which can also be a critique of the content as well. 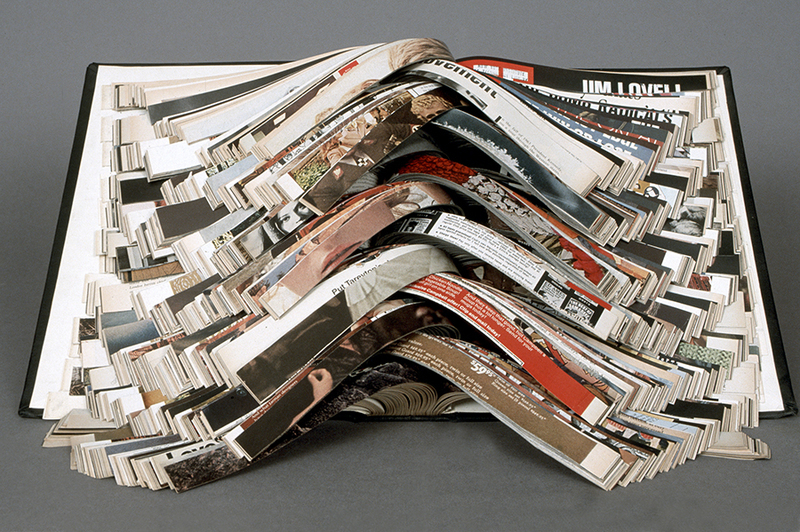 OPP: Are there books you would never alter?

DB: Books in our culture are presumed to be objects of affection, accorded a high status; their significant value may be due to the quality of materials, monetary expense of publication and the relevance of ideas. As one of the oldest technologies for disseminating information, all books, regardless of content, are made in the likeness of that familiar, black-clothed object: the "good book," the venerated Bible. Destroying a book is almost like destroying, not only the author’s soul, but God’s word immortalized in the wisdom of an ancient text block.

For centuries, responsible parents and repressed librarians have universally proclaimed, “Respect books, don’t touch them with sticky fingers!” If we even think about damaging a book, we scan the surroundings, waiting for an omniscient voice, “If your mucilaginous fingers blacken that book, if you have specious thoughts and you intend to sacrifice that volume, even for a righteous artistic cause, you will be punished, doomed to a life filled with eternal library fines and the worst, I will strike you down with guilt!” It’s as if an a priori code is imprinted within our cerebellum that inflicts pain if we clutch a tome with bad intentions or fingerprint it with filthy digits.

In my work, I primarily use discarded novels, atlases and art monographs. At one time, their spines stood upright on thousands of miles of dust-free shelves. As the information in the books became redundant, new volumes supplanted the well-read copies. They were tossed into a molding heap: vanquished titles stacked into smelly cardboard boxes and relegated to dank catacombs with cockroaches and rodents as their custodians. So, who will punish me if I revive a lost publication from the 42nd Street Public Library’s dumpster, a neighbor’s trash bin, the basement of Strand Books or a Judaica book shop in the East Village? I have actually saved numerous books from becoming landfill.

But there are certain books I won’t re-purpose because they are rare, such as the Guttenberg Bible—it’s perfect as is. I also wouldn’t modify a book whose title does not resonate with my sensibilities or a religious text, where doing so might endanger my life. 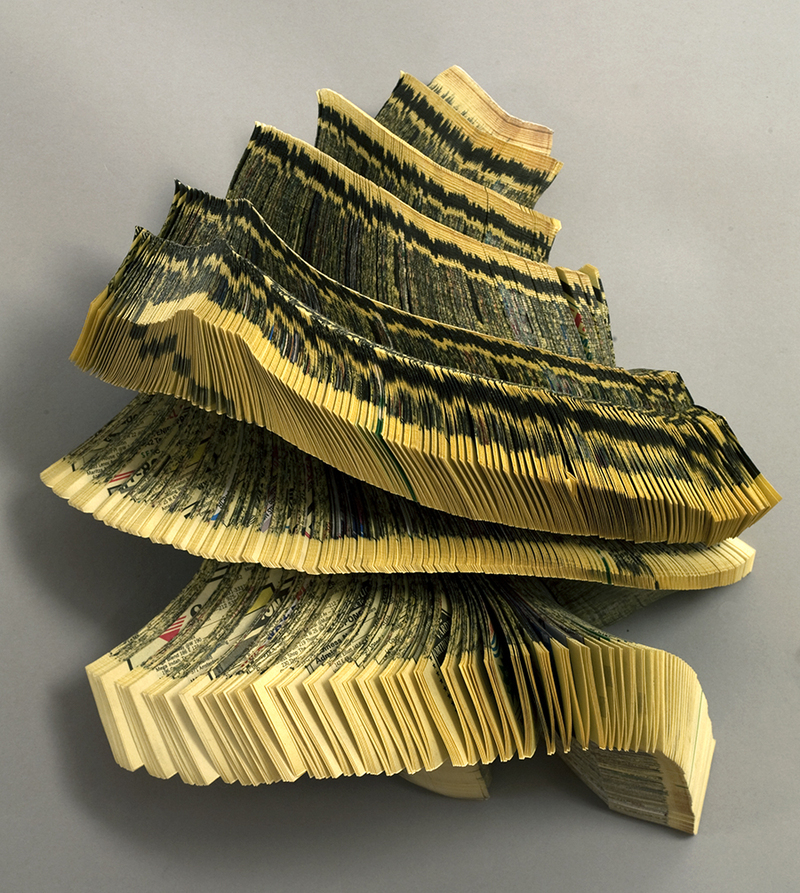 OPP: Gouge is a series of cut, drilled and pierced books. You describe the process as excavating, "as if it were a thrilling, previously undiscovered site in an archeological dig." While archeologists never know what they are going to find, they don't just start digging anywhere. There's a reason they pick the sites they pick. Once you make that informed choice as to where to dig, how often are you surprised by what you discover?

DB: There are two revelations that occur while working with power tools; one is immediate and the other delayed. I use a high-speed rotary drill to eliminate text from the front of the page, turning ink and paper to dust as the words disappear, as in the pieces Red Hat with Veil or Patterns of Abuse. Sometimes I work from the reverse side, and it’s not until turning it over that I see the effect of eliminating the inks, as in Erosion or Tessellation. Both are nontraditional drawing methods. Drawing with a pen or graphite is an additive process in which you see the results immediately. Instead, I use power tools as my stylus to create marks through a reductive process. There’s a third discovery made when I begin shuffling the gouged pages on top of each other and temporarily stacking them—sometimes five pages deep—and the excitement of a visually stimulating image emerges. On the website, it’s difficult to see the actual results in some series. In Frieze, Disorder and Erosion, I use quarter-inch spacers between each page. Not until the pages are finally glued in place does the excitement of what I’m seeing become real.

When doesn’t it work? When I think a found image is a good candidate, but the image doesn’t interact with the empty squiggles and hollow marks I grind into the paper. I’ve learned what works through trial and error. The buzz occurs when there’s a collaboration between the original image and my alterations; the two create a synergetic, revelatory spark that ignites an aha moment. 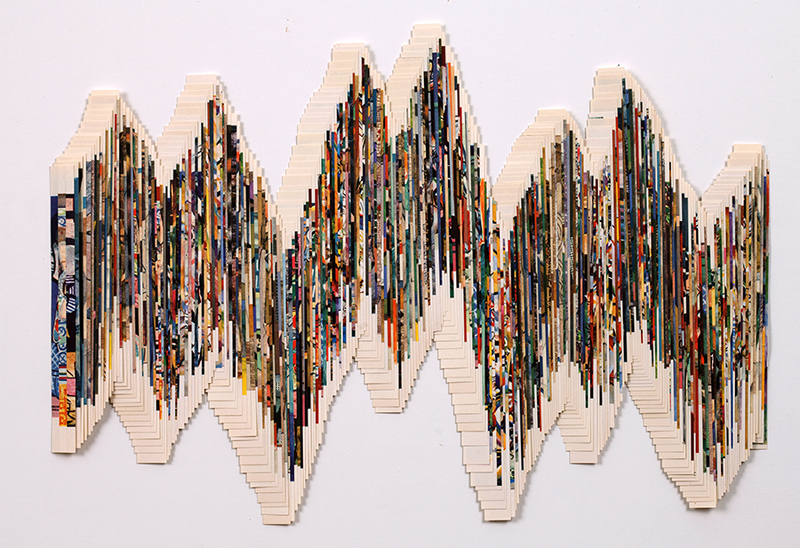 OPP: My favorite series is Indicies (2002- ongoing). These abstractions evoke mountain ranges, ocean waves, EKG readings of the human heartbeat and EEG readings of brainwaves. I love that the process appears so cut—pardon my pun—and dry, but it produces such poetic results. Could you talk about the process of creating these pieces?

DB: Each piece in this series teaches me something new about how to put a line together and how to modulate the peaks and valleys. The book is sliced into strips, that are slightly fanned out on top of one another, creating a calligraphic gesture that appears to be a line doodle or scribble. After I configure the individual strips, I tape them together, creating a perpetual replay of the abstracted content and allowing the viewer to scan the entire book. For example, in Modernism and Pollock, the alternating currents reference both admiration for these artists and their falling out of favor at certain times then swinging back into adulation. Another reference is to the daily modulations of the stock market and precarious art investment in an unstable economy.

OPP: What are your thoughts on e-Readers?

DB: Fantastic! E-readers are convenient, hold a multitude of reading materials and are accessible with the click of a button. One day they may mostly supplant the paginated book—but not completely. There are too many readers who insist on physically turning the page. Who has heard of anyone passing on a dog-eared Kindle or reading the serendipitous hand-written notes in the margins? The choice to read using an electronic device or to turn the actual pages of a book are not mutually exclusive. Both technologies transmit an author’s words to an audience. We don’t have to choose between watching a film on a large screen in a movie theater and watching it on a TV or computer monitor. The experiences of viewing are different, but both are effective.

Right now I don’t use an e-reader, but their versatility excites me. Software programs allow the reader to interact with the published text or imagery, shrinking the gap between the reader and author. They become collaborators, whether the author likes it or not. I am working on a number of digital animations that will use a computer screen or iPad. But unless it’s a mixed media installation that requires that kind of technology, I’m sticking to the 'actual' book. 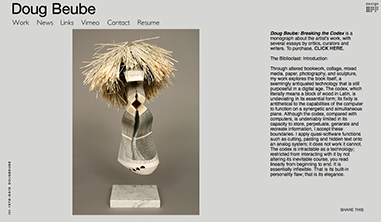 To view more of Doug's work, please visit dougbeube.com.
Featured Artist Interviews are conducted by Chicago-based interdisciplinary artist Stacia Yeapanis. When she’s not writing for OPP, Stacia explores the relationship between repetition, desire and impermanence in her cross-stitch embroideries, remix video and collage installations. She is an instructor in the Department of Fiber and Material Studies at The School of the Art Institute of Chicago, where received her MFA in 2006, and was a 2012-2013 Mentor-in-Residence at BOLT in Chicago. Recent solo exhibitions include I Still Haven’t Found What I’m Looking For (2013) at Klemm Gallery, Siena Heights University in Adrian, Michigan and Everything You Need is Already Here (2014) at Heaven Gallery in Chicago.