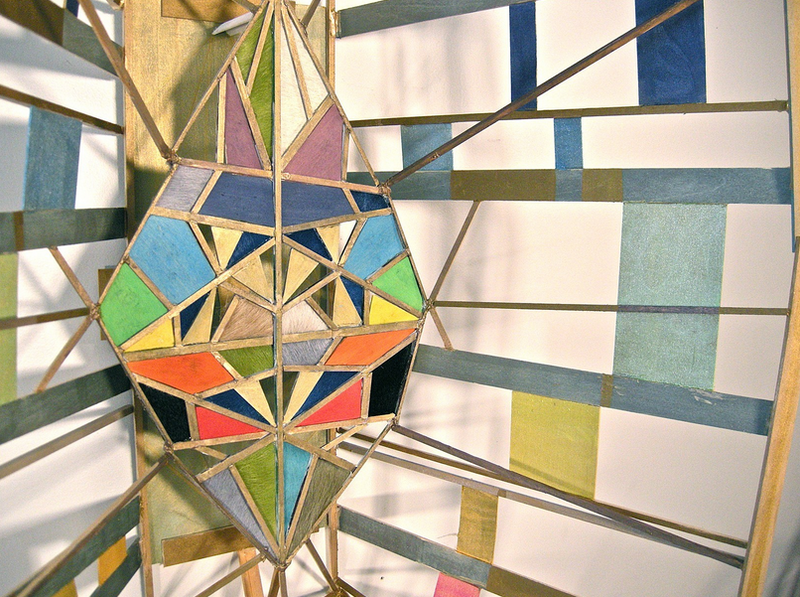 Informed by her research into metaphysical philosophy, REBECCA POTTS explores the transmutation of matter and energy as manifested in sculpture and painting. Her angular, wooden sculptures evoke webs, dome-like architecture, stained-glass windows. Most often radiating from a central point, they are portals, focus points for the attention and energy of the viewer. Rebecca earned her BFA (1998) from The University of North Carolina at Greensboro and went on to earn her MFA (2002) from Cranbrook Art Academy in Bloomfield Hills, Michigan. She attended Skowhegan School of Painting and Sculpture in 2003. She has exhibited primarily in New York, including Working Artists (2015) at Academic Gallery, Abraxas at Temporary Agency (2014), Upfront at Feature Inc (2011) and New York 2111 (2011) and Scattered Logic (2009) and at The Texas Firehouse. Rebecca lives and works in Brooklyn, New York.

OtherPeoplesPixels:You make primarily wall-hung sculptures, although there are exceptions to this rule—Sandal and Matador from 2010, The Wise Will Have Passage and Casual Proximity from 2008, to name just a few. Could you talk about the wall as a space for sculpture? What draws you there more often than to the floor?

Rebecca Potts: Wall-based sculpture has more of a seductive energy; it draws you towards it. Whereas free-standing work—that you might trip over—has a bit more of a masculine, declarative energy. The fact that less than a 360 degree view is presented is also intriguing. Why? Is it holding something back, does it have secrets, is it trying to behave like a painting? The works from 2014 and 2015 are quite fragile and line based, dealing with machinations on energy and space personified. Mounting them on the wall is semi-protective, but also ensures that the encounter by the viewer happens at eye level, allowing for a projection of the self into the work. 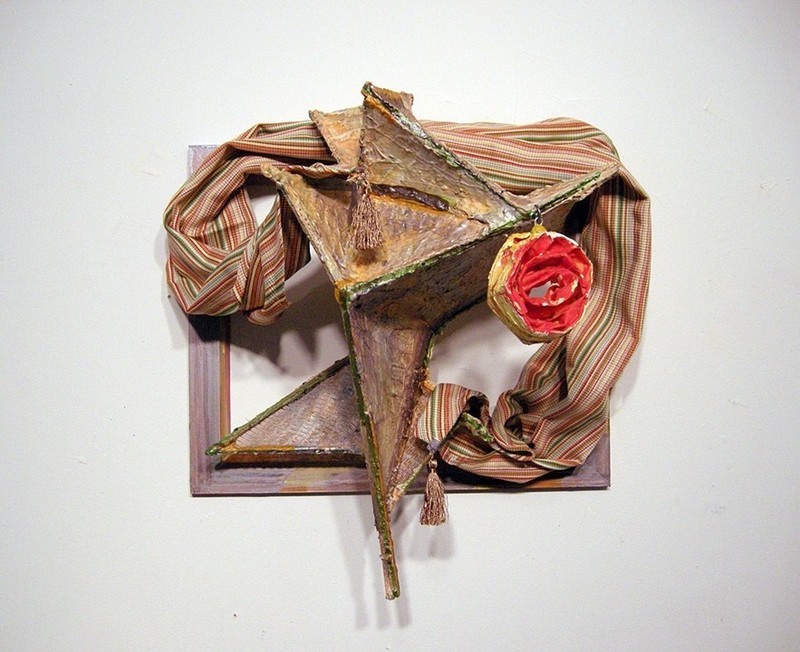 OPP: Before 2013, you were using more found materials in your work—fabric, pieces of jewelry, sequins, corks and a glass eye—as well as plaster and clay. Since 2014, it appears that you are working exclusively with wood and paint. Earlier work seems more bodily with lots of gloppy textures, fabric folds and curved lines, while newer work feels more architectural with straight lines, angles and hard edges. Was this a conscious shift? How has this evolved over time?

RP: Found and scrap materials have always been attractive to me. I collected the corks for The Wise Will Have Passage (2008) while working in a restaurant. Sometimes I encounter things on the walk to my studio, as in Bigger There (2013). Broken pieces of jewelry or worn out clothes might find their way into sculptures, as in the belt used in Chicken Skin (2011) or the material in (E)West (2011). Working with found or accumulated materials is rich in possibilities for additive practices. It is how I innately approach art making, and is a very improvisational and reactive process. It’s a very animistic way of working. As I am creating, there is some direction from the work itself.

The shift occurred as a result of a desire to look beneath surface as my primary focus and define space in a more subtle, energetic way. The work from 2014-15 still uses that method of using units and accumulation, but employs the most basic unit: the line. I am interested in defining space that is at once structured and permeable—the cell wall, for example—or describing radiation physically. The shadows cast by these pieces both push them out and away from the wall as well as accentuate their materiality. 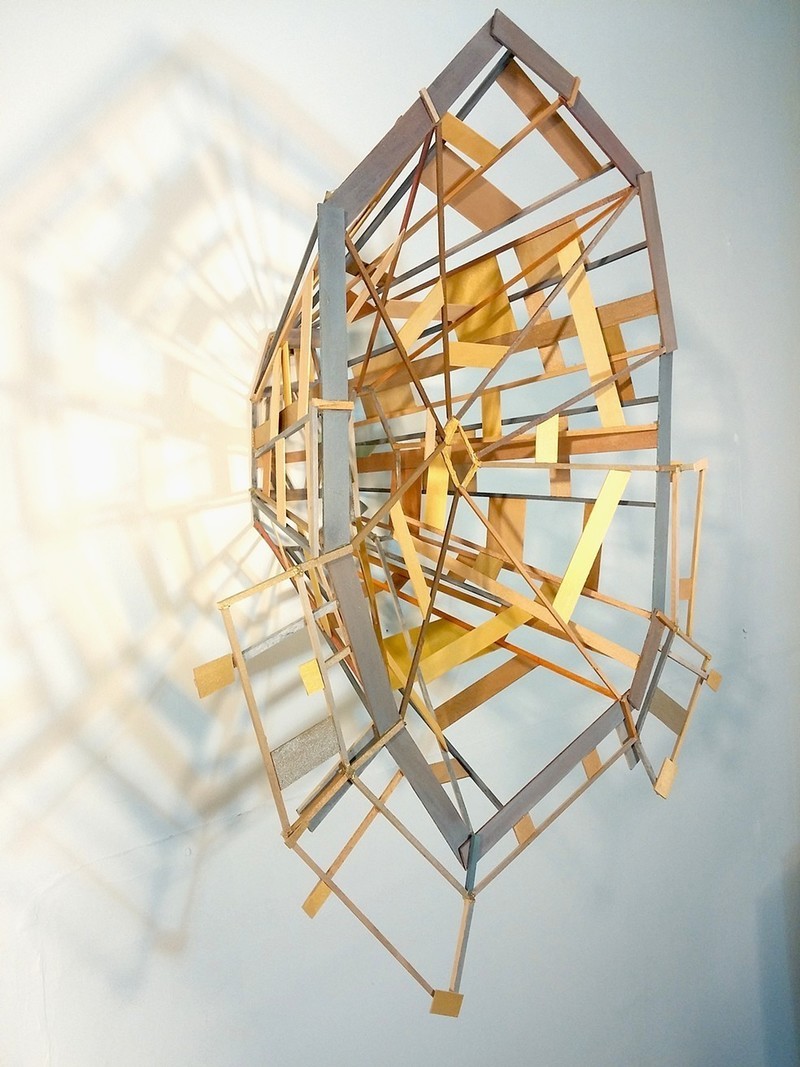 OPP: The forms of your most recent sculptures (2014-2015) evoke a multiplicity of images: stained glass windows, shields, talismans, spider webs. The forms radiate from a central point, sometimes concave and sometimes convex. How do these forms relate to your interest in energetic transmutation?

RP: The radiant form is associated with many ideas, from the big bang to human auras to descriptions of heat or light. Heat and light are difficult to sculpt, but may be suggested, and a number of the evocations you bring up are three dimensional objects that exist primarily in a language of line. Transmutation is a transformation of material or element into another state or form. This body of work explores transformation in several ways: of energy into vector, vector into line, line into delineator of spatial boundary and skeletal structure into architecture. The same thing happens as the form casts its shadow, transforming back into something intangible but still visible. The concave versus convex aspects close off or open up the ends of the work, similar to a closed versus open circuit. Many of these pieces, such as both Radiation Gray/Gold and Radiation Yellow/Gray have central hanging elements that spin in accordance with the currents in the room, a transformation of motion occurring as a physical demonstration of time. 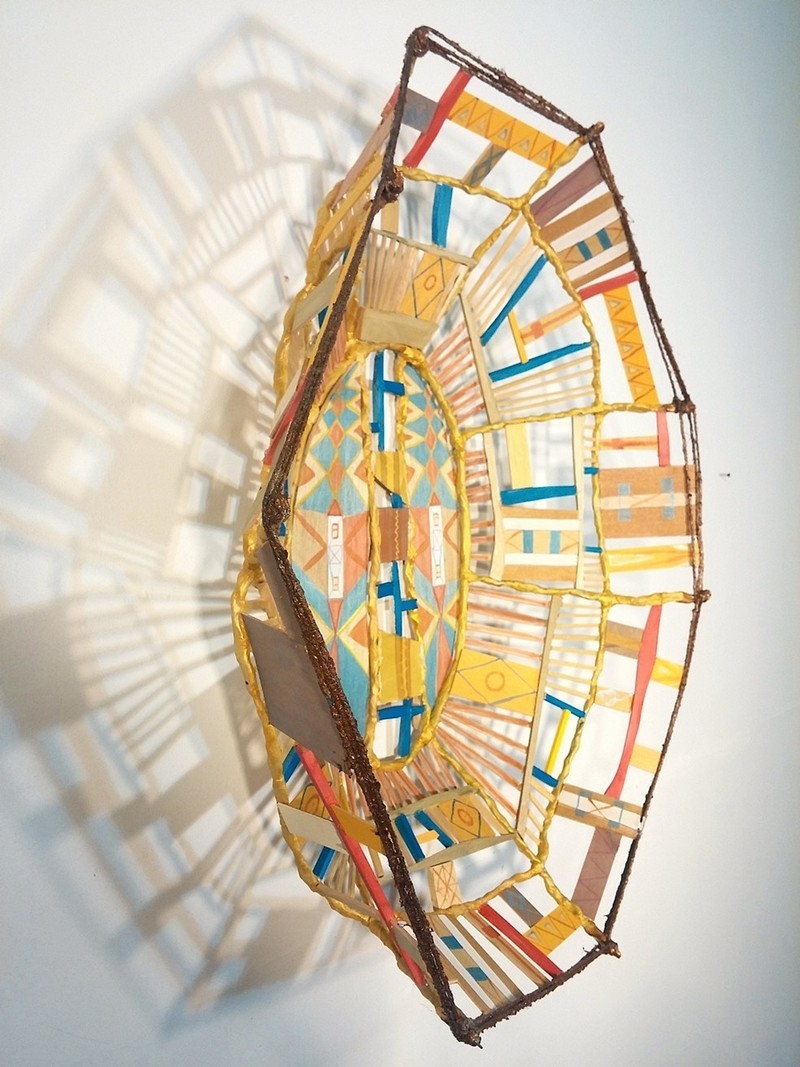 RP: I would say it works on all these levels, but would use the word metaphysical over spiritual. Metaphysics is a philosophical investigation of that which is beyond sense perception whereas spiritual speaks more to an experiential self-exploration. For the current series of work, studying the Medicine Wheel has been formally and conceptually important. It uses the four directions to correspond to various elemental, animal, human, earth and cosmic states. Through these associations one can describe existence, tell the story of time and creation, as well as achieve personal growth. It is a simple coded system loaded with symbolic information: lines, circles, spirals, vectors and colors that become increasingly complex as one's understanding of their corresponding connections deepens. This system is used in many cultures worldwide with slight variations. Another influential source was Jack Schwarz's book, Human Energy Systems, for what the form of energy might look like. Similarly Bernini's treatment of The Holy Spirit as not only beams of light but spears of gold in The Ecstasy of St. Theresa informed my ideas about representing light and energy in dimensional form. I don't see the work as dependent on these sources, though. I've had very positive response to this body of work, with and without commentary. 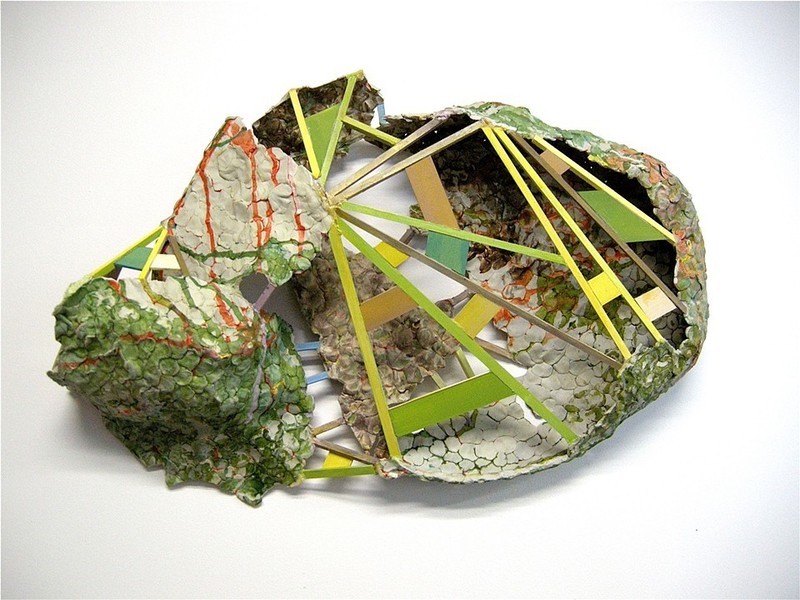 OPP: Here's a slightly strange, practical question. . . there's another Rebecca Potts, who is an artist. Her work is very different from yours, and her website pops up when I google your name. Have people ever confused the two of you in a professional context? Any advice for other artists with the same problem?

RP: I am aware of her and I'm sure she is aware of me, though our paths have not yet crossed. We have never been confused in a professional context that I know of. I would say that duplicate names in professions are not unheard of, and as far as advice would go, I would say it is a very individual choice in how one approaches it. I know people who have changed their names to deal with this very problem, and at least one other person who has not. I think Rebecca Potts just sounds like a sculptor's name, right?

OPP: If I were to walk into your studio right now, what would I see?

RP: You would see a lot of things in progress. I tend to work on anywhere from three to five things at once, so as not to be slowed down by paint or glue needing to dry. It also helps me to work on an idea in more than one way, to see what works. Sometimes I come up with something on the fly that I want to try, and that becomes its own thing. The new pieces as a whole are more trapezoidal in nature than the works discussed above, although they still have the four directional points represented. They also are beginning to fill in a bit more with solid fields on the inner and outer planes. Though they are not finished, I am moving towards reincorporating some materials (fabric and grill cloth) that I have used before. I seem to be circling back to some previous ideas, while still remaining conceptually in the same world. It's a spiral progression, rather than a linear one! 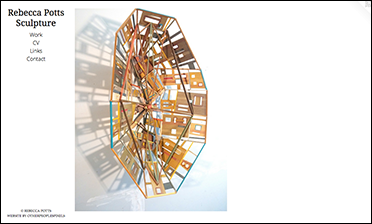 Featured Artist Interviews are conducted by Chicago-based, interdisciplinary artist Stacia Yeapanis. When she’s not writing for OPP, Stacia explores the relationship between repetition, desire and impermanence in cross-stitch embroideries, remix video, collage and impermanent installations. She is an instructor in the Department of Fiber and Material Studies at The School of the Art Institute of Chicago, where received her MFA in 2006, and was a 2012-2013 Mentor-in-Residence at BOLT in Chicago. Her solo exhibitions include I Still Haven’t Found What I’m Looking For (2013) at Klemm Gallery, Siena Heights University (Adrian, Michigan), Everything You Need is Already Here (2014) at Heaven Gallery (Chicago) and When Things Fall Apart, a durational, collage installation in the Annex Gallery at Lillstreet Art Center (Chicago). Form Unbound, a two-person show, also featuring the work of Aimée Beaubien, closed last month at Dominican University's O’Connor Art Gallery (River Forest, IL).