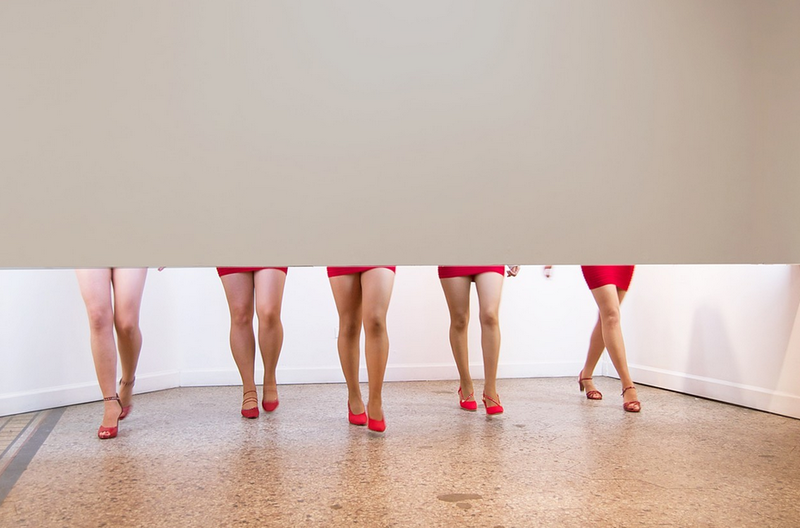 Colombian-born JOHANA MOSCOSO’s embroidery, performance and sculptures are a response to and an expression of her experience as a Latin American woman and a resident alien in the United States. She renders the migratory movements of generations of her family in dense embroideries that combine machine and hand stitching. The absence of a male dancer is conspicuous in Machera, her series of salsa performances, questioning traditional gender roles as they are manifested in Latin American culture. After earning her BVA at the Pontificia Universidad Javeriana in Bogota, Johana came to the United States in 2007 as an MFA student at the Savannah College of Art and Design, where she received an Artistic Honors Scholarship. Since then, she has exhibited extensively in both Columbia and the United States. She is represented by Otros 360 Grados Gallery in Bogota. Johana will attend ACRE Residency (Steuben, Wisconsin) in the summer of 2015 and is a 2015-2016 BOLT resident at Chicago Artists’ Coalition. In February 2016, she will mount a solo show at the Lakeside Legacy Foundation in Crystal Lake, Illinois. Johana lives and works in Chicago.

OtherPeoplesPixels: You use an uniform color palate of red, black and white in your embroideries, performances and installations. Why do you choose this palate? Do you ever feel limited by it?

Johana Moscoso: These particular colors reinforce concepts that I explore in my work. Red allows me to address gender stereotypes relating to Latin women. For example, the red dress, red lipstick and red nails are clichés of attractiveness, especially in Latin American culture. On the other hand, the dancers in my performances uniforms wear black because it directs the viewer's attention to the performer’s movements. Ultimately, the color choice supports the work and unifies the performers as one.

Many of the threads in my embroideries appear to be black but are actually just very dark colors like blue and gray that have been built up through layers of stitches. The best way to appreciate all the colors in the embroideries is in person. I use white simply because it complements the whole of each piece and helps emphasize the content. In Machera Series 2, the white powder acted as a document of what happened on the platform, allowing the performers movements to be visually traced. Furthermore, white in my embroideries creates contrast and highlights the traces made by stitches. 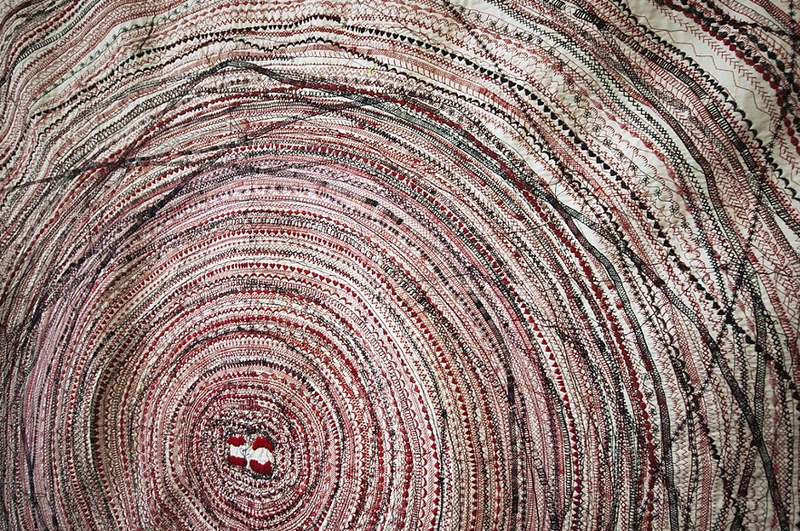 OPP: What’s the relationship between the hand-stitched, red lips and the accumulated, machine stitched lines in your embroideries?

JM: My embroideries are abstract maps of my family’s migration, both my immediate family and over generations. They celebrate the places where my family has migrated, the languages and traditions related to these locations and the memories that have passed from generation to generation. The lips in my embroideries are personal; they are located at the longitude and latitude of actual locations where my family migrated. They are very static in comparison to the machine-made lines in the fabric that act as a trace for the time, labor and nostalgia of our journeys. The trace made between the first and the last stitch represents an intangible timeline. 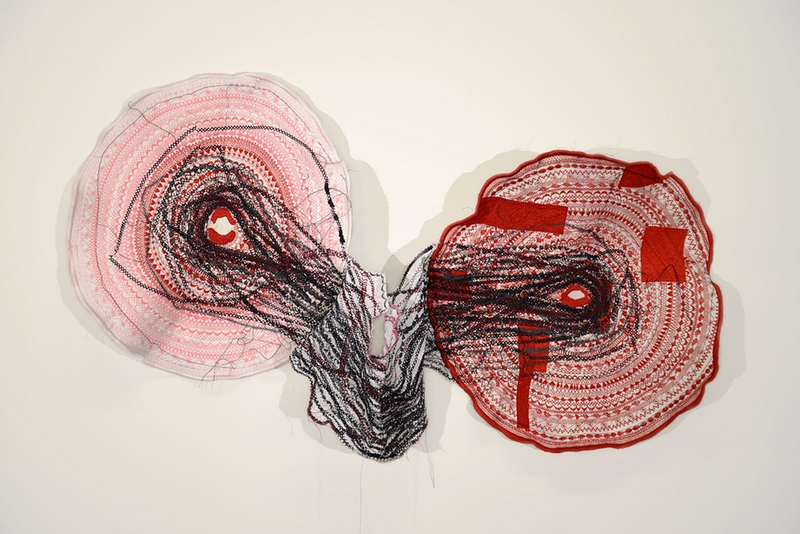 OPP: The interactive sculptures from the Emotional Prostheses Series address themes of safety, comfort and adaptation in relation to emotional, physical and social needs. Each piece hints at an isolated individual in relation to a potentially threatening environment. Did these works grow more out of your experience growing up in Bogota, Colombia or moving to North America?

JM: This body of work was first conceived in Bogota, but it certainly evolved when I moved to the United States. The series examines situations and emotions that occur in everyday life through sculptures that affect the body. In Bogota, many of my Emotional Prostheses projects focused on relationships and the absence or presence of loved ones. When I moved to the United States, I became more interested in the idea of protection. As an immigrant this seemed to be a natural progression for the work.

Even though I have used public transportation all my life in Bogota and other cities, using the MARTA in Atlanta made me feel vulnerable. On many occasions I was the only person in the bus, train or station! This inspired the piece MARY KAY Protection Device, which attempted to protect my identity, in the sense of both preserving and hiding it. It is ironic to think about protecting your identity as an immigrant; your daily goal is to try to fit in! When I wore the piece and tried to enter the train station, a MARTA agent stopped me to ask many questions. It became uncomfortable, so I left the station before catching a train. When I toke the piece off at the entrance of MARTA, the same person came and asked me why I was wearing that piece and where I was from. She was worried because people were calling me a bomb girl and calling me different nationalities and ethnicities, even though they could only see my eyes. I was afraid of getting deported. 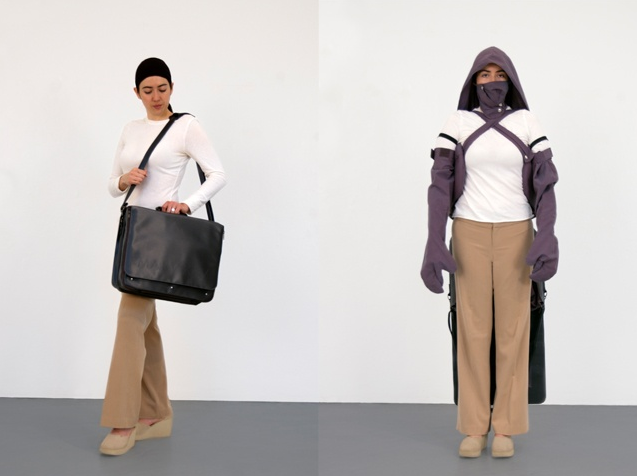 OPP: You've danced Salsa on top of sticks, flour, in the back of a U-Haul-style truck as part of Trailer Park Projects, a space supported by the Institute of Puerto Rican Arts and Culture, and at various gallery spaces. Tell us about Machera, your series of salsa performances. Are any cultural nuances in these performances lost on United States audiences?

JM: Showing my performances in the States has been an important process for me. It has allowed me to analyze and explore my interests in “otherness.” What I have found is that there is a clear distance between the viewer and the performers, and sometimes it seems as though these performances reveal the divide between the two cultures. For example, in Machera Series 1 at Roots and Culture in Chicago, we danced behind a false wall. We were so curious about the viewer's perspective because everyone was so quiet as we performed. Many of my performers are Colombians, and we joked that if we did this performance in Colombia, people would climb under the wall and begin to dance with us, turning the show into one big party!

OPP: The absence of a male dancer, which is not common in Latin cultures, is significant in these performances, right?

JM: In some Latin dances such as Salsa and Merengue, the absence of the male partner is not common. I embrace that women stand up for themselves and celebrate sisterhood between girlfriends in my performances. 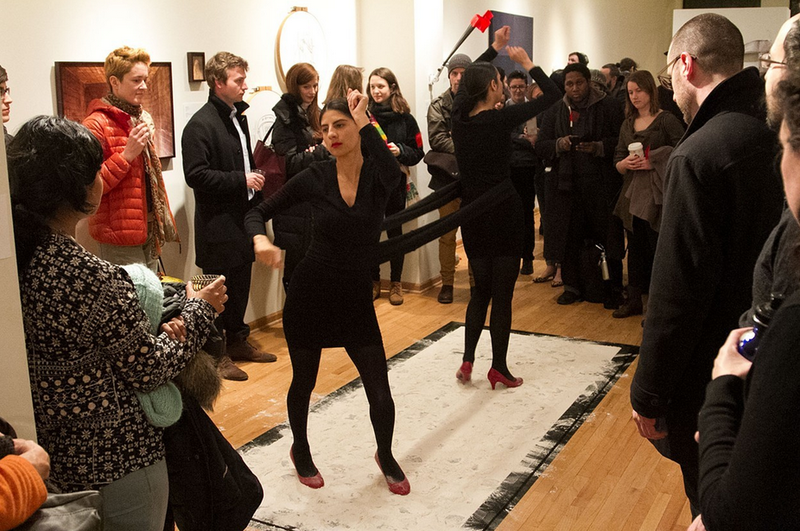 
OPP: You are represented by Otros 360 Grados in Bogota, Colombia, your home country, and have a show there in August 2015. Tell us about the show. What are the practical realities of exhibiting internationally? What’s different about exhibiting in Colombia, as opposed to the Unite States?

JM: One of the goals of the Otros 360 Grados gallery is to address an inequality in the number of women and men exhibiting in and represented by commercial galleries. The show (title to be announced) in August is a dialog between fiber, drawing and painting from a Latin American, feminine point of view. Aside from me, the show includes Gabriela Lascombes (Argentina), Maria Jose Mir (Chile), Maria Jose Concha (Chile), Nayibe Bechara (Colombia) and Carmenza Kafarela (Colombia).

Exhibiting in the United States has taught me to feel competent in terms of the logistics and research that goes into working towards an exhibition. This process has been made easier because my husband Scott A. Carter is also an artist. We help each other in our practices and even more so during the installation of each other’s exhibitions.

Exhibiting internationally requires substantially more logistical planning, research and culture awareness. For the show in Colombia, I adjusted to working in a way. It is also a great experience because my family and I are a team that works together towards the installation and exhibition. They help me choose the right materials, go to the right places to get what I need for the installation and support me by giving me their opinion on hanging the pieces. In addition, they help me pack and unpack the pieces. Ever since Otros 360 Grados began representing me, they have been attending the openings, artist lectures, and have a good relationship with the gallerists. Their support is vital for me.

It took me many years of being an artist in the US before I finally had a chance to have an exhibition in my home country of Colombia. This is a huge achievement for me. I am very excited and thankful for all the opportunities to show my work, however, showing in Bogota is very special to me as part of my heart lives in Colombia. 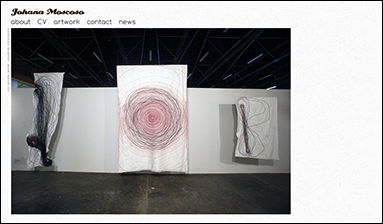