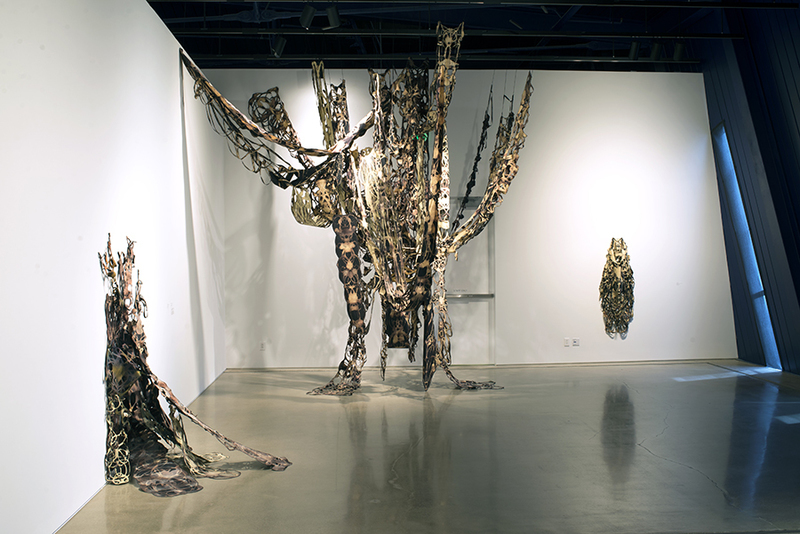 CHRISTI BIRCHFIELD balances control and surrender by using various printmaking techniques and tools in unconventional ways. Whether she's running fresh flowers through an etching press or bleaching dyed canvas, her work points to the impermanence of nature and human mortality. Christi earned her BFA in Printmaking from The Cleveland Institute of Art and her MFA in Visual Art from Columbia University. She has been an Artist-in-Residence at Skowhegan, Vermont Studio Center and SWAP Residency at SPACES Gallery. Solo shows include Above the Fold, Below the Surface (2014) at Siena Heights University (Adrian, Michigan) and From the Inside Out (2014) at William Busta Gallery in Cleveland. In 2017, Christi won an Individual Excellence Award from the Ohio Arts Council and the Cleveland Arts Prize, Emerging Artist Category. Christi lives and works in Cleveland, Ohio.

OtherPeoplesPixels: You work primarily in printmaking, including traditional techniques like lithograph and etching. But your toolkit of mark making is way more expansive. What other techniques do you use to make marks?

Christi Birchfield: Printmaking tends to be a starting point for my work. I have been immersed in the tradition of the medium for many years. I majored in printmaking in both undergrad and graduate school, and I’ve worked as a master printer at Zygote Press Inc. Somewhere along the line, it became interesting to not only use printmaking presses as a way to produce multiples but also as simply a method for creating marks. During graduate school, I began exploring monoprints, which do not originate from a reproducible matrix. The etching press began to function as a way to imbed materials (smash stuff) into paper. I started running bouquets of flowers and house plants through the press. The way the press would flatten while at the same time morph and stretch the plants became very interesting to me. I liked how the object that I was running though the press became an abstraction of itself. The single, directional push of the material held relationships to both the industrial and the digital world.  Additionally, the juices in the plant would squeeze out, staining the paper, resulting in a painting that I orchestrated but did not control. These chance operative techniques for making a mark challenged my previous approach to printmaking. Monoprinting is how I approach textile works as well. I use a sod roller to print bleach paste onto black canvas. 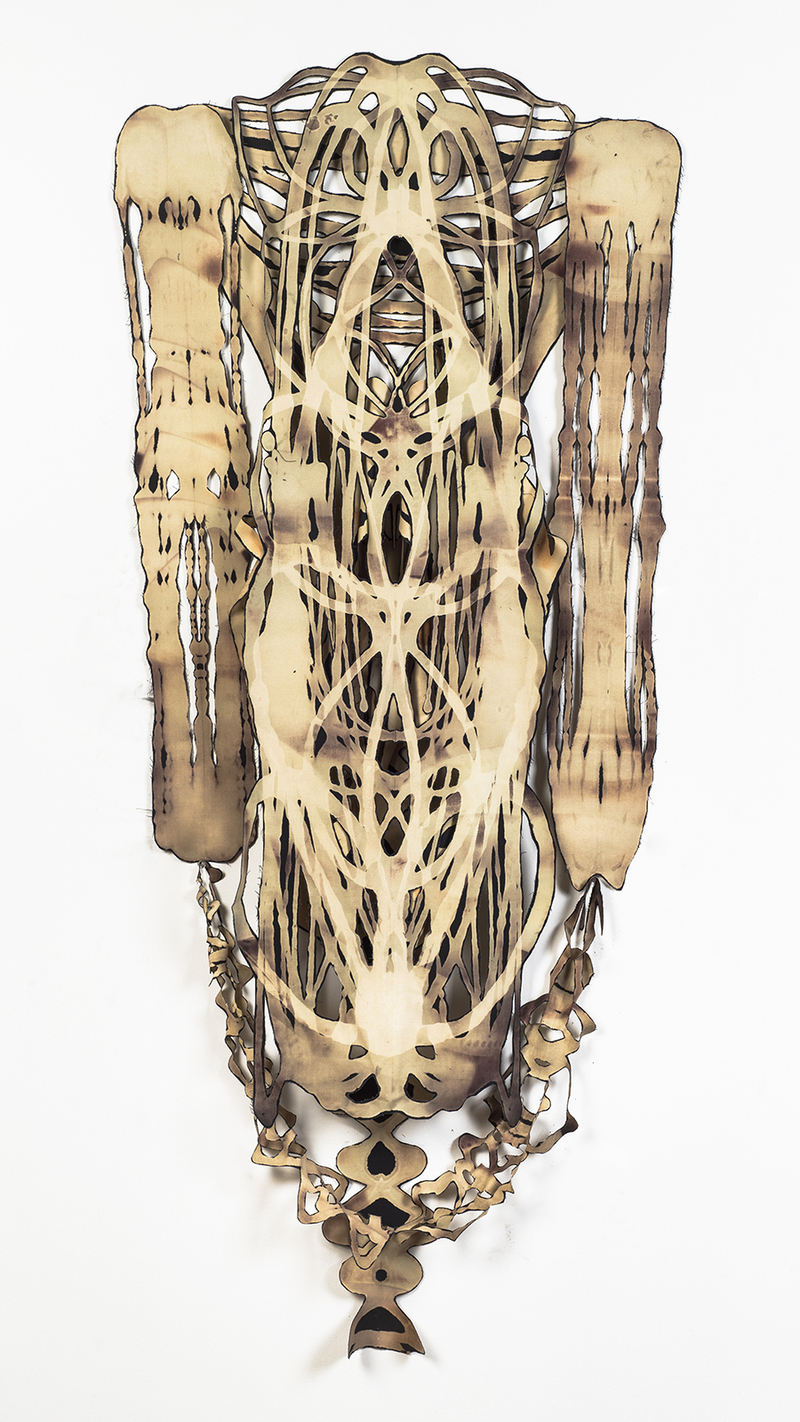 OPP: Is the distinction between printmaking and drawing important to you as a maker?

CB: Yes, that distinction is important. For me, drawing is very much about a one-to-one relationship between the maker and the surface that is being marked. It’s also about intentional decision making and forethought. Printmaking can have the same attributes as drawing, but it is more about a distance between myself and the thing being created. I set up situations where I put materials into motion without fully controlling the shape, pattern or color those materials will make. It is a way to stay present in the process but also remain distant. My role hovers between the maker and the observer of my own work. I think about painters like Morris Louis or Helen Frankenthaler who developed approaches to stain painting where color was allowed to flow based on gravity and absorption and not based on how those artists moved the brush across the canvas. 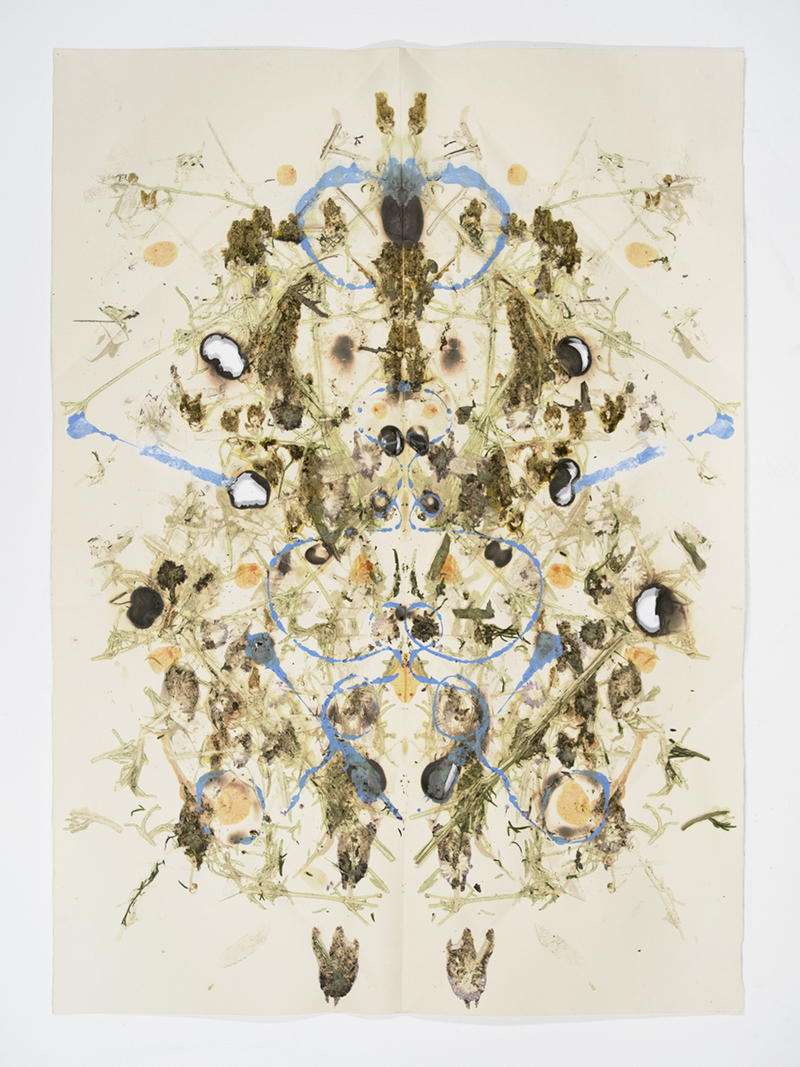 OPP: Does color in the flower works only come from the flowers themselves? Is this color fugitive?

CB: My practice consists of various levels of control. Choosing how and when to apply color is one of the factors that I negotiate as I work. The color does come from the flower. When I first started working with the plants, it was important for me that the color only come from the flower with no additive pigment. It seemed conceptually necessary at the time that nothing contaminate what would naturally occur from the plant itself and the process I was administering. In more recent works, I’ve started exploring the application of watercolor. 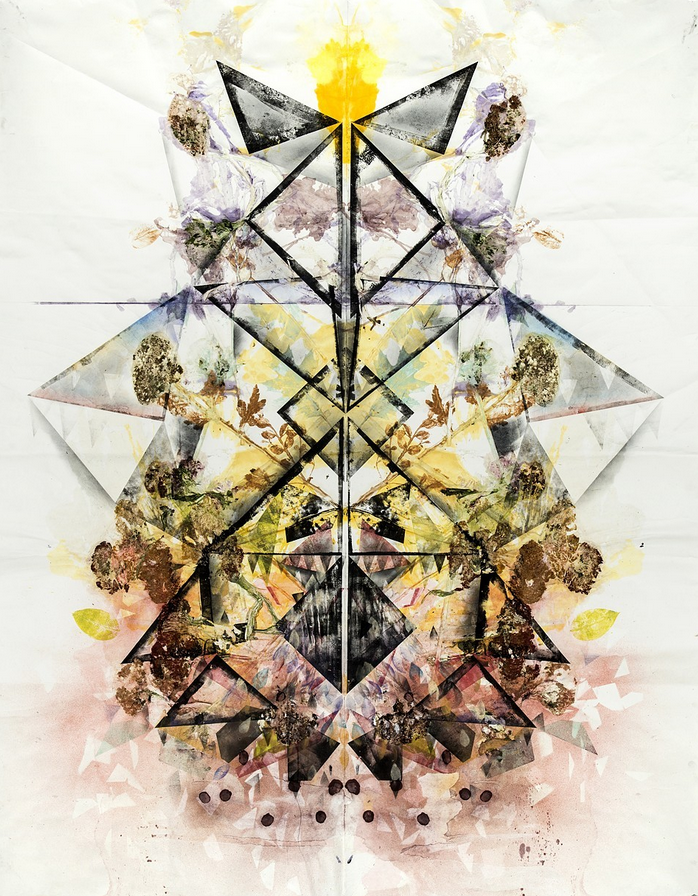 OPP: What role does symmetry play in your practice?

CB: Symmetry is a way to create a sense of order among marks that are otherwise chaotic. Symmetry has a very practical application for me. There was a time when I felt the work was just a gloopy-gloppy mess. It felt out of control. The symmetrical image was a way to create an automatic order while still staying true to the process and materials. The shapes immediately called to mind the human body and it’s interior. While the plant material references fluids that could perhaps come from the body, it only made sense that compositions also reference something bodily as well. 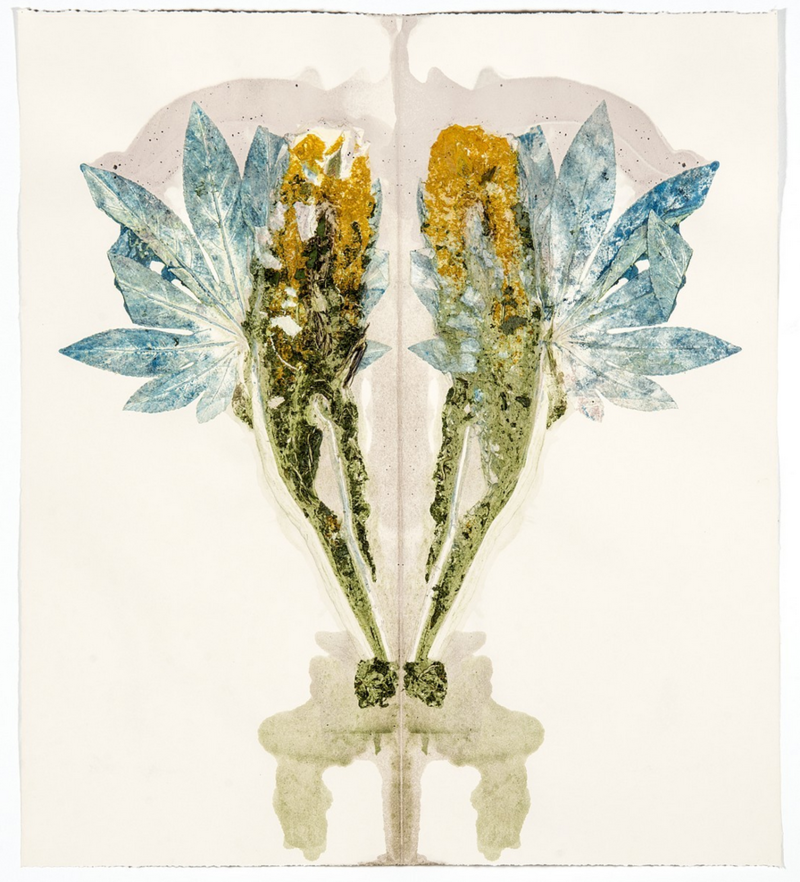 OPP: Pieces like Surgent, Belvedere and Lord and Lady, all from 2014, at first appear to be symmetrical, but when I look closer, I realize that it isn’t pure symmetry. Is this simply a symptom of the process or an intentional part of the content?

CB: Yes, the symmetry is faulty. There is nothing exact about the process. The works are made by simply folding the paper in half to create a print on both sides simultaneously. I’ll often times shove flowers, inky plates, and some paint within a folded sheet of paper and crank it through the press. The result of how all these materials relate after the press has done it’s work is more interesting to me than whether or not both halves of the composition are identical.

In fact, the slight differences between both sides of the print reveal a bit of the process that I rather enjoy. We as humans are thought of as more or less symmetrical. However, have you ever mirrored your own face in Photoshop to see what you would look like if you were actually symmetrical? The results are a bit unsettling and confirms that the differences between our two halves make us appear human and not as digital constructions. As my pieces are made by hand and very much about the process and materials, the slight variations that serve as the non-symmetrical indicators clue the viewer in on the fact that this work is a result of something outside of modern technology. 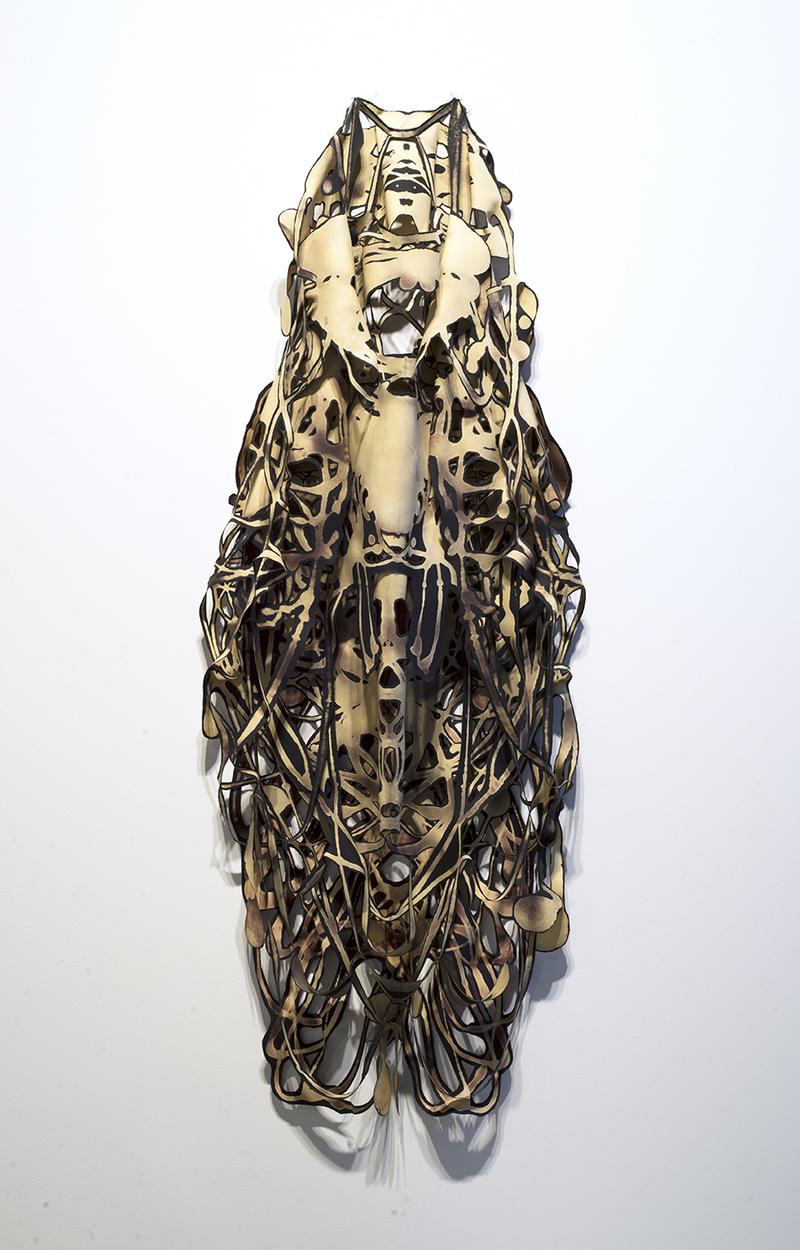 OPP: In recent work you’ve shifted away from the rectangle of paper and cut out the bleached marks in the works like Sagittal Plane (2016) and Reconfiguration (2015). These slumping sculptures read sometimes as hanging foliage and other times as collapsing skeletons. Can you talk about destruction in relation to the forms?

CB: Lately, I’ve been working a lot with textiles. The works are made by printing bleach onto canvas and then hand-cutting around the marks to produce complex shapes that have been cut out and through. Canvas is a common surface on which to create a painting, but I am very interested in the material of itself and its hefty qualities.

I’ve always considered the posture different works of mine take on. Some pieces are tired, some casual, some doing backbends. The way the canvas sags and slumps seemed to suggest something very human. The works tend to mirror the scale of a person and the material of canvas is a versatile fiber that I can manipulate in various ways.

There is a constant theme of time running through my practice. The pace of time and the fragility of the human existence underlie much of my work. My daughter is ten months old. In becoming a mom, I suddenly had a deeper connection to the generations of women that have come before me. My grandmother, my mom, myself and my daughter—we are all part of a continual line. Layering of fabric cut-outs, printed elements overlapping, collage pieces all serve as a way to see everything at once and also not quite be able to make sense of everything ever. I relate this to a constant sense of both temporality and permanence. Our bodies are material taking up space yet mortal, impermanent. The fabric cut outs look like skeletal fragments, like pelvises and ribcages, evoking the body and it’s transience. The first medical X-ray was of Wilhelm Rontgen’s wife’s hand. Her response—“I have seen my death”—suggests that seeing our inner selves, our material essence, confirms our own mortality. 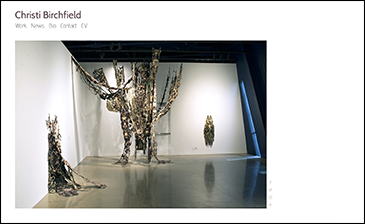