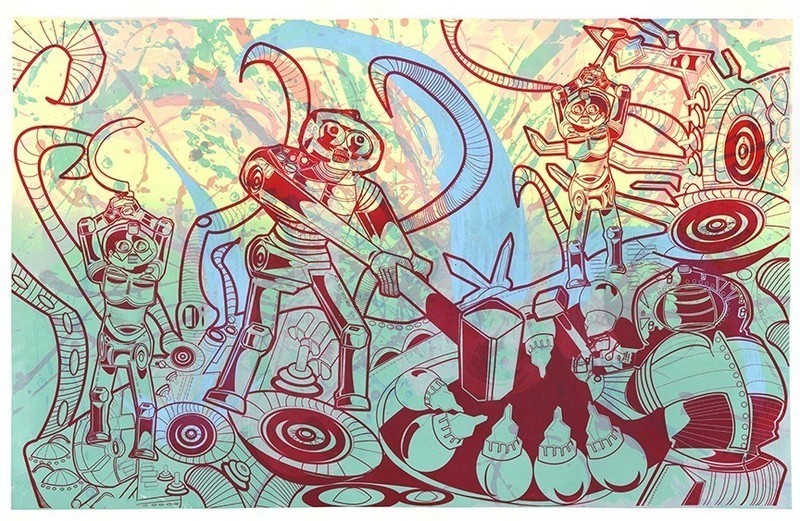 NATHAN MELTZ combines printmaking, animation and music to create narrative works about technology’s infiltration of every aspect of contemporary life. He tells stories that encourage empathy with robotic life forms collaged from industrial machine parts (i.e. nuts and bolts), which he views as stand-ins for newer technologies like nanotechnology and genetic modification. Nathan holds a BS in Art Education and an MA from University of Wisconsin-Madison, as well as an MFA from State University of New York Albany. In 2020, his work was exhibited at the 6th Graphic Art Biennial of Szeklerland at Transylvanian Art Centre, Four Rivers Print Biennial (Carbondale, IL) and Multiple Ones: Contemporary Perspectives in PrintMedia at the Museum of Contemporary Art (Jacksonville, FL). In 2019, he was a Visiting Artist at the Institute for Electronic Arts at Alfred University. In June 2021, several works will be included in the upcoming Biennale Internationale D’estampe Contemporaine de Trois-Rivières (Trois-Rivières, Quebec, Canada). Nathan lives and works in Troy, NY.

OtherPeoplesPixels: Your work merges music, animation and printmaking into one practice. Tell us about how your artistic background led you to work across these media.

Nathan Meltz: I spent most of my twenties playing in pretty good bands, producing decent screenprinted posters, and making bad comics. I started a printmaking-heavy grad program at the University of Wisconsin-Madison, and I started flirting with music and visual art happenings as part of an under-documented art/music/craft collective called the Wisconsin Pop Explosion. By my thirties, I had gotten better at printmaking and relocated to upstate New York with my wife, where we started a family. At that point, I definitely had distinct and separate bodies of creative work: a printmaking-heavy practice and a musical output. Feeling constrained by these limitations, I started another grad program at the University of New York at Albany, which heavily encouraged breaking down these creative silos, and I started merging elements of printmaking, sound, and bringing in video and animation. I really credit the SUNY Albany MFA program for promoting an anything-goes approach when it came to techniques and media. Ever since, I haven’t identified so much as a “printmaker,” or “musician,” or “animator,” but simply as an artist, using a variety of media to express myself. 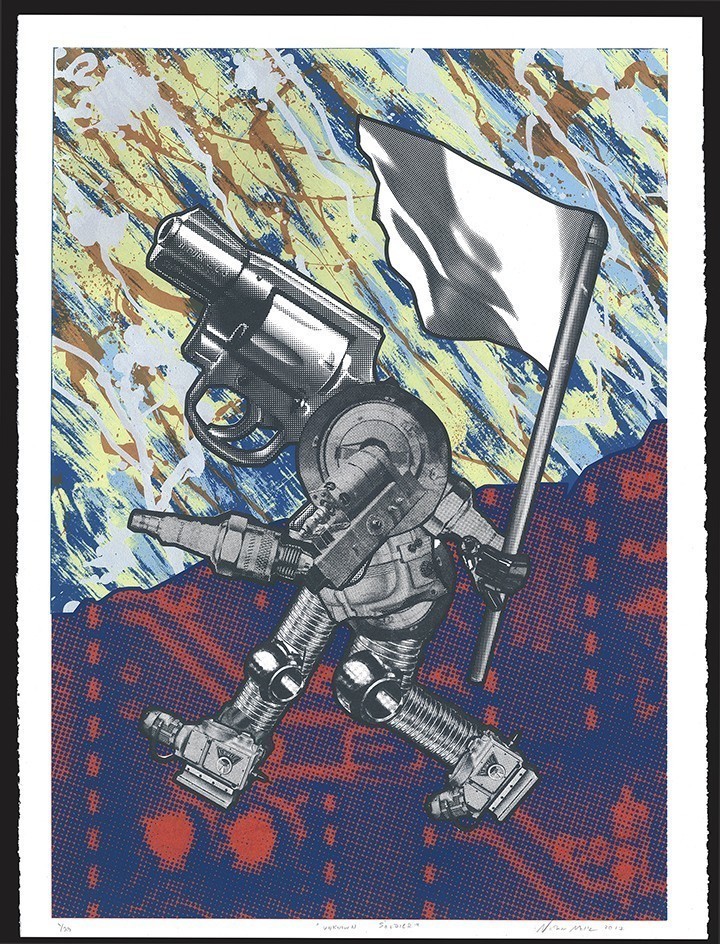 OPP: I would describe your aesthetic as “retro-futuristic.” It looks like what people in the 1950s might have expected the future to look like. How does this aesthetic serve your conceptual agenda?

NM: I can definitely be accused of enjoying the nostalgia that comes from collage. When I create figures and environments out of collaged machine images, I am using those machines as metaphors for other technologies, whether it be nanotechnology, fossil fuel extraction technologies, or agricultural technologies. So for me, the machine images are stand-ins for something else. It just so happens that all of these contemporary technologies get filtered through my personal visual vocabulary before they become prints, animations, or sculptures.

OPP: In your statement, you talk of the “not so subtle ways technology is sneaking into our lives and prepares them to resist this inevitable robot invasion.” But your work seems less a critique of the dangers of technology and more a critique of humanity. The problems the robots face seem to be very human problems. Your thoughts?

NM: It’s definitely both. Technologies are tools that have the potential to help, or harm, depending on how they are used. I hope my work gets the viewer to consider how we use these technologies, to be more critical of their applications.

Many of my robot characters are stand-ins for us humans. All of my narrative work is about trying to foster some empathy for those impacted by malevolent technologies. Technology plays a clear role in some of the biggest challenges of the day, from war to inequality to climate change. We don’t have a chance of meeting these challenges unless we can engage with narratives that draw us closer to the actors involved and build some empathy for them.

OPP: I have to ask, are you a Battlestar Galactica fan? I’ve been thinking a lot about Cylons while looking at your work. Whatever the answer, what films, movies and texts have influenced the way you think about humans’ relationship to technology?

NM: I know a lot of people who are involved in critical discourse around science and technology. While no one cites Battlestar as an overt source or reference, we all dig it. Science fiction in general plays a big role in my art. I was lucky enough to be of the right age to work at a VHS video rental store in Madison, WI called Four Star Video Heaven, which was very much responsible for my film education. Early film depictions of robots—from Fritz Lang’s Metropolis to Gort in The Day the Earth Stood Still—were really important. The droll made-for-tv movie The Day After (1983), which depicts nuclear holocaust in Lawrence, Kansas, continues to fascinate me. As do performers like Devo, Gary Numan and George Clinton. And then there is academic work, like David Noble’s Forces of Production, which identifies the role of technology in promoting inequality in labor. The Atari 2600 video games of my youth—particularly the atomic dystopia Missile Command—are also lasting influences because they display a combination of 8-bit design beauty and total technological-based destruction. 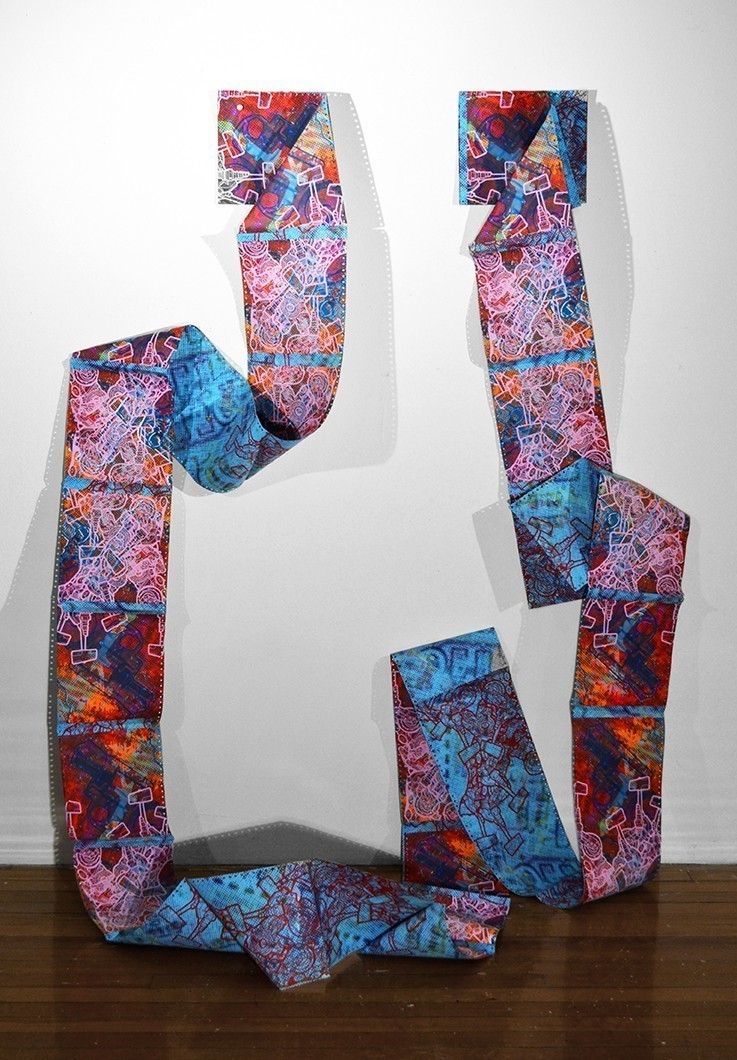 NM: Collapse is a uniquely pandemic-influenced work. I started this hybrid work of printmaking and sculpture, which is essentially an accordion book-form, in April 2020. I very much had the itch to express how I was feeling during these early stages of the pandemic, as well as reflect the general global pandemic chaos. However, my regular work-flow was disrupted with the closure of my school/work-based facilities at the Rensselaer Polytechnic Institute. I was lucky enough to have a fairly well-stocked printmaking studio at my home, and I decided to take a stab at a project, limiting myself to whatever materials I happened to have in my studio at the time. I didn’t want to even have to order the delivery of supplies because at that early time of the pandemic, I worried about putting delivery drivers at risk.

So, I started taking old screenprint-positives from previous projects, and exposing them to screens in a collage-like manner. Without any high-quality rag paper in stock, I decided to use the only paper I had in my studio: a ream of 1980’s dot-matrix paper. For those not raised on the early days of inkjet printing, this is the paper that has the perforated edge of punched-out dots to feed the paper through a 1980s printer. Of course, this paper in itself has meaning, as a manifestation of technological obsolesces. The paper is literally in a state of destruction, as it threatens to fall apart in your hands (its very materiality is held together by the layers and layers of acrylic screenprint ink, sizing the paper). Then, the paper is covered with images of conflict and images of destruction. I did my best to work up lots of color harmonies, essentially going for a balance of pretty destruction. 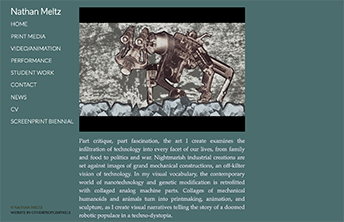