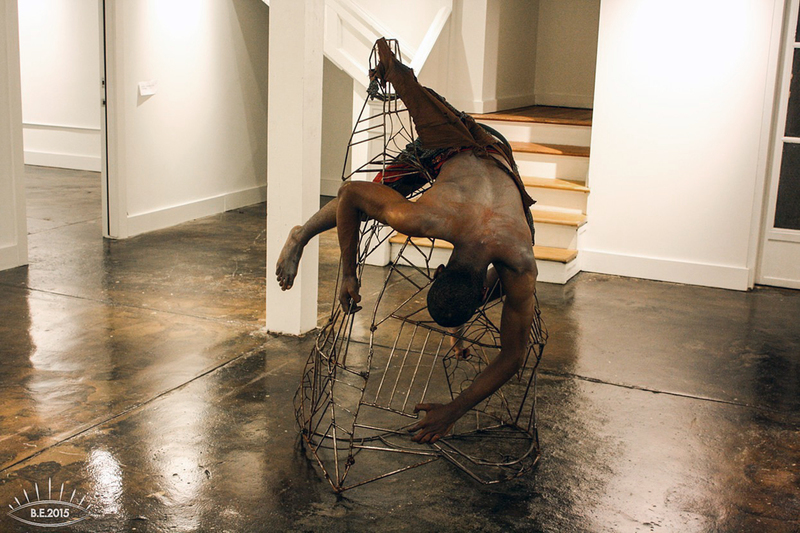 In performance, installation, drawing and welded steel sculpture, BOBBY ENGLISH, JR. explores the immediate and inherited trauma of racism, as well as the capacity for catharsis and forgiveness. His numerous performances include elements that are also part of religious services—symbolic objects and garments; music; language in the form of chanting, singing and the rhetoric of preachers and an audience/congregation. Using his own body, handmade artifacts and repetitive, ritual gestures, Bobby offers viewers a spiritual lens through which to look at the personal experience of social and political injustice. Bobby holds a BFA in Drawing with a concentration in Sculpture from The Maryland Institute College of Art. His solo exhibitions include I AM YOU ARE (2016) at Gallery CA in Baltimore, Presence, Soul, Existence (2016) at the Ward Center for Contemporary Art in Petersburg, Virginia and History, Experience, Revelation (2015) at Terrault Contemporary in Baltimore. He has performed at School 33 (Baltimore, 2016) and the Queens Museum (New York, 2015 and 2016), as well as at numerous performance festivals. Bobby is based in Oakland, California.

OtherPeoplesPixels:  When and why did performance first enter your art practice?

Bobby English Jr: My father was also a Broadway performer and Italian Opera singer, so it had to come out eventually. Not to mention I have performed for my mother hundreds, maybe thousands of times to this day. Performing has always been natural for me, but it entered my art practice as soon as I began creating metal sculpture. It was an instant marriage; not really inspired by anything except my desire to push the idea of sculpture and installation into theatre and film. I’m striving for the truth and emotion that can’t simply come from object; the kind of connection that comes from human to human energetic dialogue. 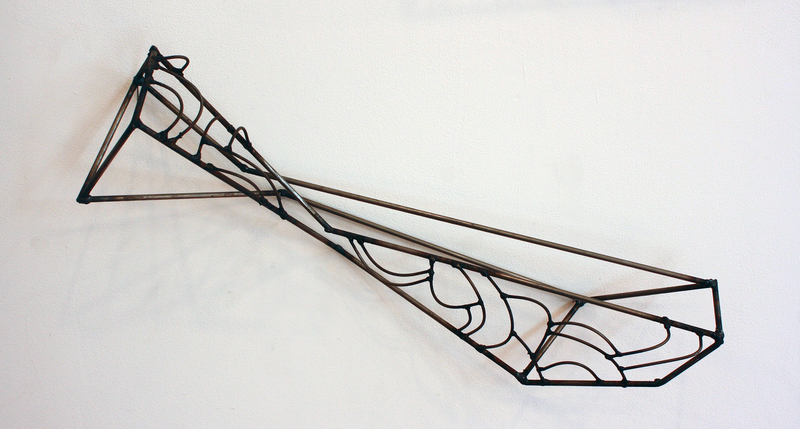 OPP: Do you conceive of the welded steel works as sculptures first that are then activated by performance? Or are they props created specifically for use in the performances? Does the distinction matter?

BEJ: The distinction doesn’t matter at all, actually. Sometimes I am simply intrigued by a geometric shape or symbol; sometimes even an idea that I then transcribe into shape. Often times I create the sculptures and simply live with them in my everyday space until their meaning becomes clear. Other times I add the sculptures to my performances without knowing what they mean at all; but then their relationships to the many other sculptures I’ve created within the space informs the piece in question. It’s a very organic process, almost like a constant improv dialogue between myself and my creations; sometimes risky in some aspects. 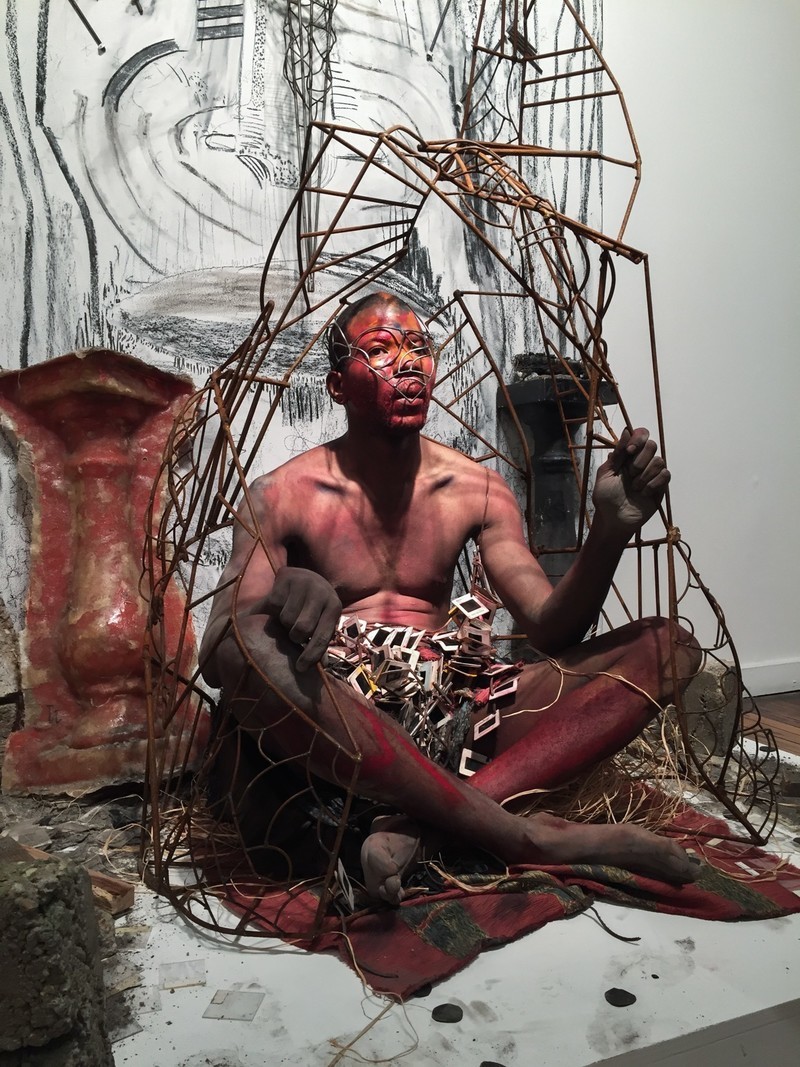 OPP: Please tell us about how you employ costume and ritual in your performance series Blossoming Black Power, which includes individual works titled Message I and Message II, Madness, , Property, and Fear and Control (Brothers! Sisters! Where are you?).

BEJ: Costume allows me to step fully into different “beings,” roles or characters, and the costumes themselves sometimes represent time. For example, in Message I, a performance centered in ritual and history; I felt more like a shaman while in that costume. Then in Becoming, the costumes are both representations of time, feeling, passage and signal my stepping into different archetypes; the hero, the stranger, the villain, the leader, the meek, the wise one, etc. So much of my performance is acting, and the costumes certainly allow me to step deeper into feeling a role. My nudity allows me to both feel more meek and more powerful. My staff makes me feel more wise; the spears and shields make me feel more aggressive, like a warrior. I draw whichever energy I need from the costumes and props.

OPP: And sometimes those change over the course of a single performance...

BEJ: I just recently became comfortable with more than one costume change in my performances. In doing so, I realized how much deeper narratives become when I both step into a character psychologically AND physically. In Becoming, I knew that each cage represented a different point in time in my life, and in planning the performance I knew that I would enter and/or use certain sculptures to enable myself to dive deeper into emotion and break more psychological and physical barriers.

OPP: You mentioned Becoming, which is simultaneously performance, installation and healing ritual. Your relationship to the “cage” changes over the course of the performance. How does that particular prop/costume speak to catharsis?

BEJ: I’m happy you picked up on all three of those! The healing aspect of my art is very important to me right now. One can almost see the trauma healing through the sequence of performances. As I’ve stepped into new healing on my journey, I want others to come along as well, welcoming them into my world as I always have.

The cage has been a piece I’ve been growing with since the very first performance with it a year and a half ago. In Becoming, the cage begins as a safe place; a womb; a place of birth, rest, comfort, the mother in its highest form. Mid-way through the performance, the cage becomes the enemy, representing a body, the oppressor. I both harm and then come to love the “body.” At the end of the performance I re-enter the cage; as it becomes my place of death, eternal rest, transformation, and total healing after a life journey that is performed throughout Becoming.

OPP: I have to ask about the little girl in the red dress, who followed you for a while during your outdoor performance Blossoming Black Power: Message I, which had a background audio track composed of numerous speeches from Civil Rights activists through the years. She was both just herself, a human audience member of live performance, experiencing it in an idiosyncratic way. But in watching her follow you, I thought about the uncontrollable parts of live performance, the introduction of joy and levity into a narrative of struggle and how one generation communicates with the next about the racist history of America. Did you know she was following you and did it change your performance in the moment? What do you think of how she reacted to and interacted with your performance?

BEJ: I did know that she was following, and I didn’t let it change anything about my performance in that. I often do react to the happenings around me while performing; comments from the audience, a sculpture being knocked over, my invading the space of the audience and vice-versa, etc etc. I enjoy these moments of complete improvisation because I feel they are the most real. Honestly, I haven’t really felt any way about it until this moment. Right now I feel a great sense of disappointment that she was oblivious to the weight of what was happening around her. On the other hand, part of me wonders that maybe ignorance truly is bliss and the way forward. 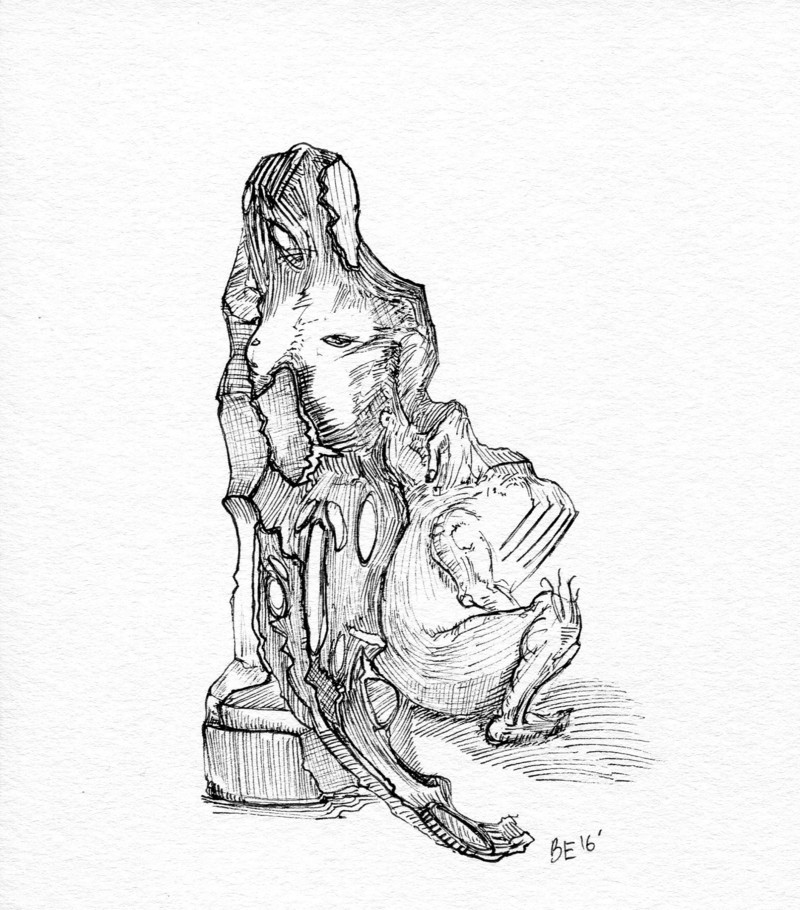 OPP: What does it mean to conflate spiritual or religious practice with performance art? Can artists be spiritual leaders?

BEJ: For me, conflating spiritual and/or religious practice with performance art is simply creating my own personal mythology that steps away from the patriarchal interpretation of spiritual texts that has and is still occurring worldwide. It’s simply another way of me reclaiming myself from internal and external colonization. It’s also a way to show worldwide similarities in myth and culture. My hope is that audience members make connections between their ancestry and the ancestry of others around them. Ultimately creating solidarity, respect, and love. I believe anyone has the capacity to become a spiritual leader. However, artists certainly have an edge on interpreting and being drawn to symbols and turning them into forms that can be more easily understood. 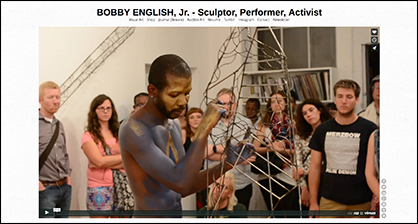 Featured Artist Interviews are conducted by Chicago-based artist Stacia Yeapanis. When she’s not writing for OPP, Stacia explores the relationship between repetition, desire and impermanence in cross-stitch embroideries, remix video, collage and impermanent installations. She is an Adjunct Assistant Professor in the Department of Fiber and Material Studies at The School of the Art Institute of Chicago, where received her MFA in 2006, and was a 2011-2012 Artist-in-Residence at BOLT in Chicago. Her solo exhibitions include shows at Siena Heights University (2013), Heaven Gallery (2014) and the Annex Gallery at Lillstreet Art Center (2014). She created site-responsive installations for Form Unbound (2015) at Dominican University and SENTIENCE (2016) at The Ukrainian Institute of Modern Art. Stacia is currently preparing for a two-person show titled Resist the Urge to Press Forward with Brent Fogt at Riverside Art Center (Riverside, Illinois) and Sacred Secular, a solo show at Indianapolis Arts Center in Indiana.