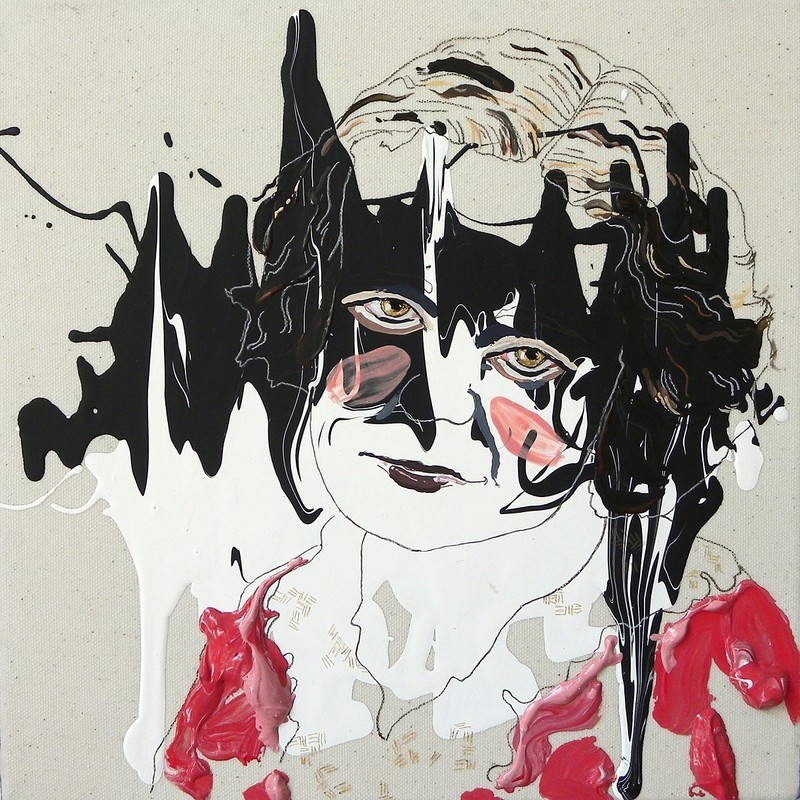 PAUL KENNETH paints portraits, but he isn't a portrait painter. His works are based on a variety of sources from photographs of his distant ancestors to the first bloodcurdling screams in horror movies. He uses gestural paint application, line drawing and a collapsing of foreground and background to express his interpretation of how these unknowable people and characters might feel about being painted. Paul earned his BFA in Painting at The School of the Art Institute of Chicago in 2010. Since then he has exhibited throughout Chicago, including shows at Mana Contemporary, LVL3 Gallery, Ebersmoore Gallery, Heaven Gallery and the stARTup Art Fair. Paul had his first solo exhibition One Wall: Curious Kin (2016) at Jackson Junge Gallery in the  fall of 2016. He will be featured in the 2017 summer edition of Studio Visit Magazine. Paul lives and works in Chicago.

OtherPeoplesPixels: All the works currently on your website are portraits, but your style of rendering the human face isn’t exactly realistic. How do you approach the age-old form of the portrait? What’s changed about your approach over the years?

Paul Kenneth: I approach my portraits not as a depiction of a person, but rather a portrayal of a personality through a defined set of mark making. This idea is the fundamental foundation of my practice.

When I began painting twelve years ago, I wanted to pay homage to the history of the portrait genre while investigating the relationship between the human body and paint. My first breakthrough was while attending The School of the Art Institute of Chicago. During my final years of earning my BFA, I constructed a complete series which was entirely based on babies. Until that point, I had approached the portrait in a straightforward manner by attempting to create a literal representation of the subject matter. While creating this series, I discovered that the paintings were more unnerving when the subject was rendered in a half completed state. The most recent change in my approach came with my last series of work Curious Kin, where I depicted portraits of my ancestors. In this series I incorporated drawing elements over and under the paint. This latest exploration has allowed me to fuse my drawing and painting practices while also highlighting to the slighted underdrawing. 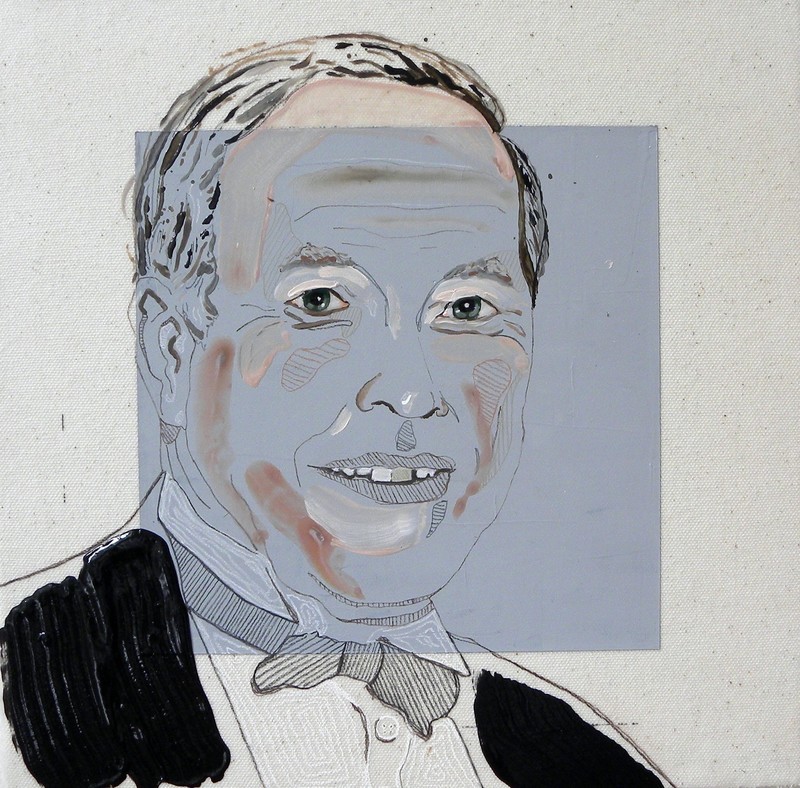 OPP: Have you always only painted the human face? Tell us a bit about earlier work.

PK: I have investigated many subject matters in my painting practice but I always find myself returning to the human face. Some of my earlier work focused on portraits of sad cats, dead owls, and fast food. In these paintings, I emphasized the traditional tropes of kitsch, the grotesque and pop art.

OPP: Tell us more about Curious Kin. How is the way you chose to render them connected to the distance between you?

PK: Curious Kin was sourced from images that were taken from family photo albums from the late 1800s to the early 1980s. I invested a considerable amount research to trace the exact relation of each individual as this information was not recorded in many of the albums. The title of each piece is the name of the person followed by their exact relation to me. Some of the portraits are rather direct relations like great-grandparents while others are extremely far removed with a few completely unknown. With the exception of my grandparents, I did not have the privilege to know any of these people even though we are connected by blood and family bonds. As each portrait was made I strived to maintain a sense of respect to the ancestor while imposing my creative aesthetic in the mark making. In a way, each of these paintings is a loose self-portrait. 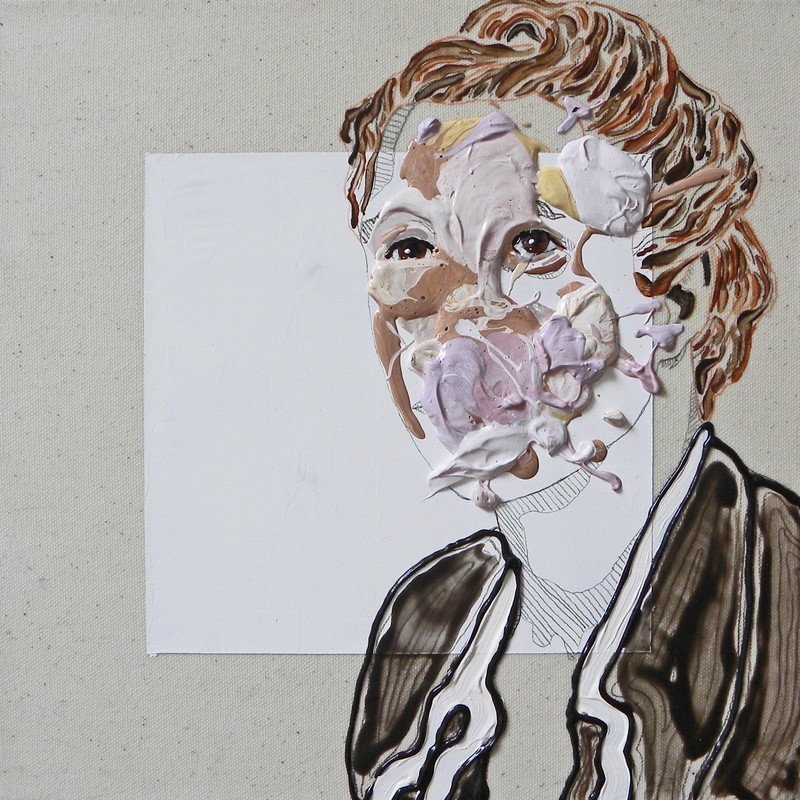 OPP: What about works like Augusta Hulda Verch (second great-grandmother) and Mary Marquis (great-grandmother), both from 2016, in which they faces are partly covered over? It’s almost like these women are silenced by your paint. It makes their eyes look panicked to me.

PK: These two paintings in particular demonstrate the idea of myself, the creator, giving consciousness to his subjects the way Frankenstein gave consciousness to his monster. During this creation process I ask myself, what is he thinking? and how does she feel about what I am doing to her? At times, their gaze suggests a state of unease with the way that I have depicted them. 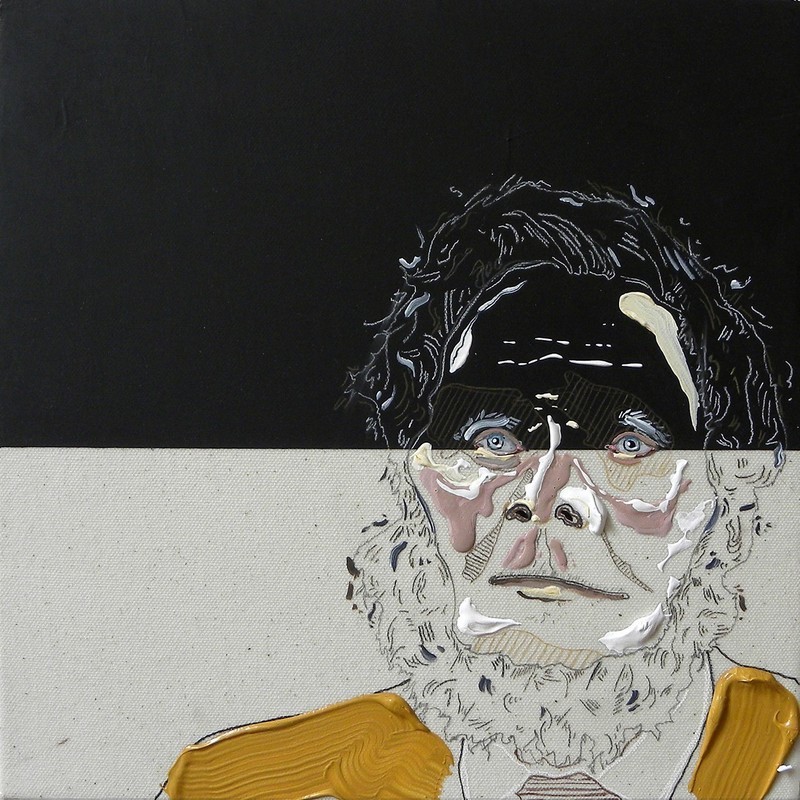 OPP: I’m really interested in the way the backgrounds—whether stripes, ovals, halos or horizon lines—intersect the line-drawn faces, which highlights parts of the faces, often the eyes. Talk about this choice.

PK: Throughout my practice, the background holds as much importance as the painterly and drawn elements on the surface. I highlight the process and materiality in each piece by leaving much of the ground visible. The stripes, ovals and blocks of gesso ground are formal additions that level the subject matter. This flattening of the portrait removes it from a representational space forcing the image to hover in a state of flux. The cropping and placement of the face on the canvas in relation to the background shapes is critical to achieve the most active visual balance. This balancing act tends to revolve around the subject’s eyes. Thus, the eyes anchor the painting preventing the portrait from drifting into complete abstraction. 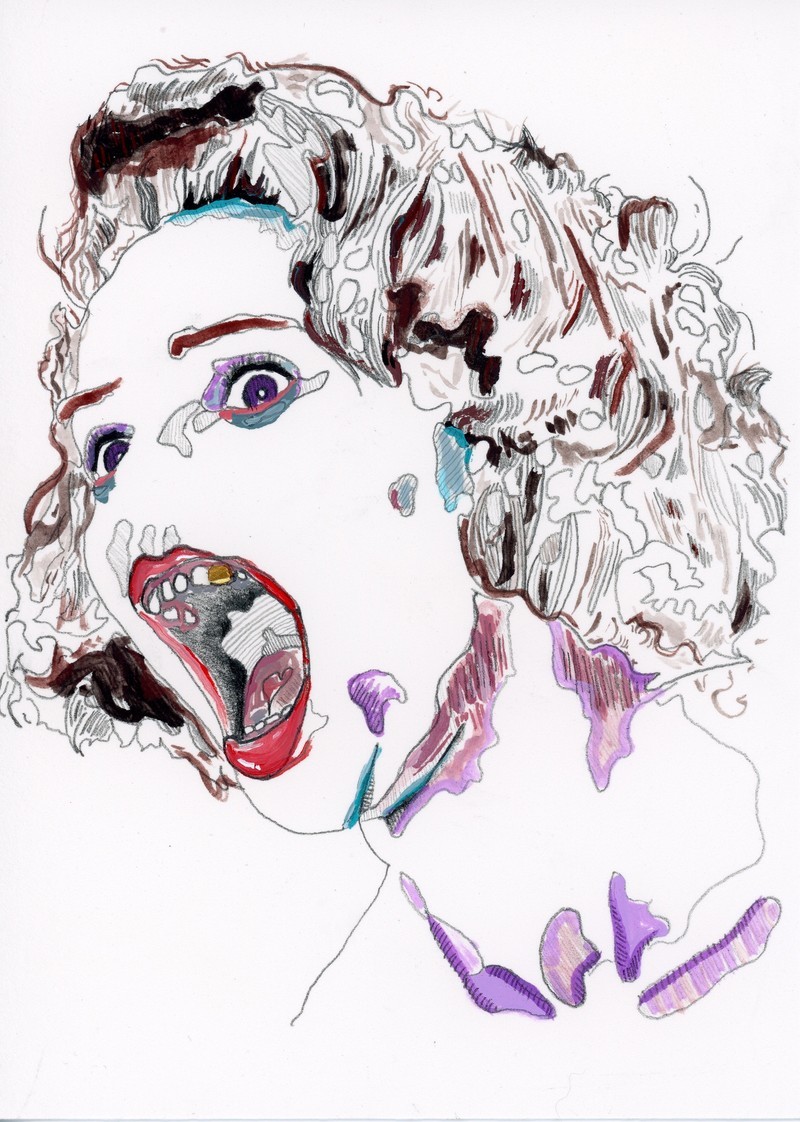 OPP: Tell us about the Scream Queens, which is a new direction. So far, these are all from the 60s. Why did you start here? Where do you see the series going?

PK: Scream Queens is a new series of works that delves into the horror films of my youth. Each piece investigates the cinematic moment when the heroine reacts to the monster with a bloodcurdling scream. By removing these women from the context of the source, their fear becomes a direct reaction to the manner in which I have depicted them. These women are afraid of the monsters they have become. The subjects of these portraits are sourced from various films that range from the 1960s through the 1980s. I am drawn mostly to this thirty-year period of cinematography as I consider it the golden era for the horror film genre. The trajectory of this series holds many possibilities, and I plan to continue exploring the use of paper as a substrate as well as further developing the cut and pasted acrylic paint technique.

OPP: You've said you are interested in the grotesque and your new series demonstrates an interest in terror. What in the world or in your life makes your own face turn to a grimace?

PK: I am rather immune to gooey gore and the average creepy crawly. But there are a few specific specimens that come to mind when contemplating my own terrors. Here is my filthy five from gross to wretched:

5. The story The Red Spot from Scary Stories to Tell in the Dark.
4. The lumps on the old dog Dutch, that frequents The Corner Bar.
3. The stench of rotting meat.
2. Earwigs. Not afraid? Watch the episode "The Caterpillar” from the TV series Night Gallery.
1. The removal of a Guinea Worm from a foot. If you are fortunate enough not to know what this is DO NOT LOOK IT UP! 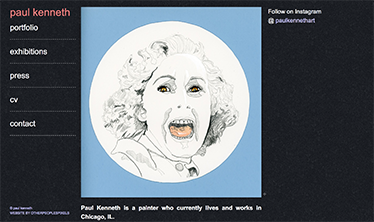