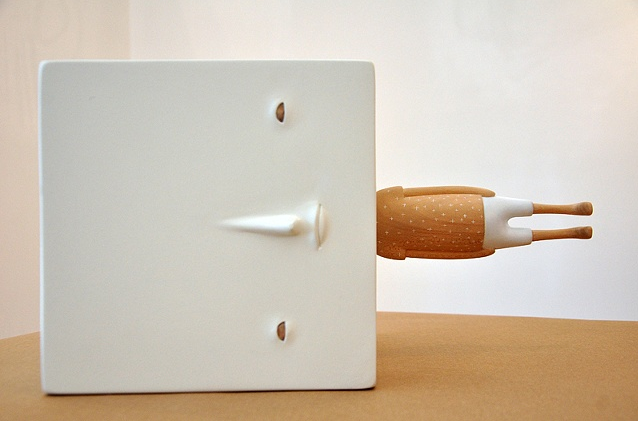 YOSKAY YAMAMOTO was born in Toba, Japan and moved to the United States when he was fifteen. His sculptures and paintings playfully mix American and Japanese cultural references, emphasizing a personal experience of cultural hybridity. His sculptures of iconic characters from cartoons, video games, books and movies are simultaneously familiar and foreign. In December 2012, Yoskay was commissioned by Perrier to create a large scale sculptural installation at Pulse Miami. He is represented by LeBasse Projects in Culver City, California and lives nearby in Los Angeles.

OtherPeoplesPixels: Your work is a fusion of these two distinct cultural backgrounds. Currently you exhibit primarily in the United States. Are the references to Japanese culture in your work ever lost on American audiences?

Yoskay Yamamoto: It really depends on each viewer to connect with the Japanese references in my work. Sometimes they get lost, and sometimes people point out the subtle references that I didn't even recognize before. Either way I’m not really concerned if the references get lost. Some people seem to be fixated on finding meaning with everything, but I'd rather have the audience find their own story. When I make art, my primary focus is to create work that excites me or makes me smile. 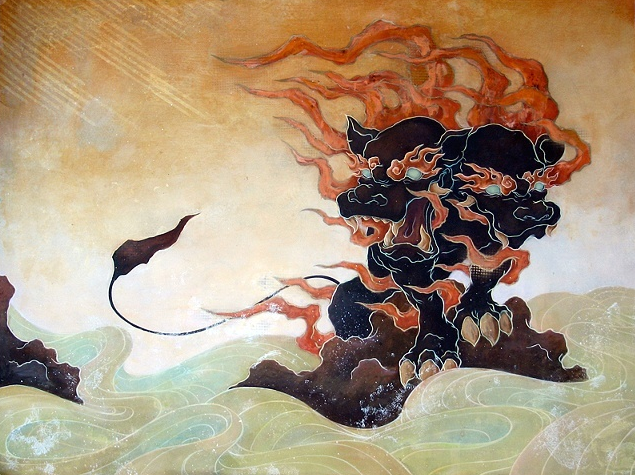 OPP: Dragons and koi are both recurring creatures in your paintings and in the history of Japanese painting. Some examples from your work include screaming for the sunrise (2009) and koibito in pale blue (2007), which features a man with a fish head. Both of these paintings have also spawned limited edition vinyl figurines produced by Munky King, a Los Angeles-based designer toy company, which seeks to blur the line between toy and fine art. Could you talk about the symbolism of these creatures in Japanese culture and your interest in them?

YY: From what I understand, both the koi and the dragon represent good luck or good fortune in Japanese culture, but this isn't the reason I created these characters. I was really into mythological creatures at the time. I love how the creatures in mythology are combinations of many different living things. I also think it's romantic. The stories are explanations of things that people didn't understand at the time.

OPP: Koibito is part fish, part boy, right? Is he a mythological creature? What does he express about you?

YY: Koibito was originally created to commemorate my pet fish, Tuna. He died because of my carelessness and laziness. But at same time, Koibito symbolizes the sense of alienation that I felt growing up in California. It's kind of like the phrase "fish out of water.” I felt and still feel like I don't completely fit in anywhere. . .  either in Japan or in the United States. 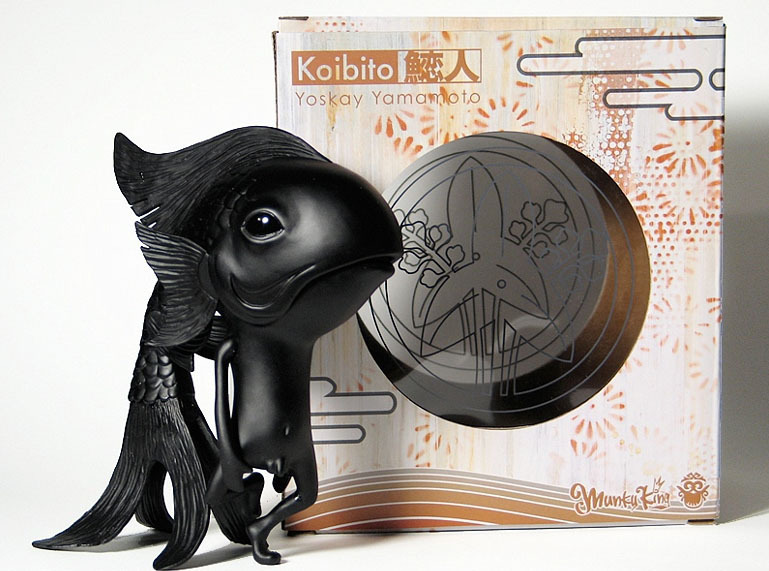 OPP: Why did you decide to recreate koibito and screaming dragon as designer toys?

YY: I thought it would be a good way to expose my art to a broader audience. And a vinyl toy is a great way to make a more affordable work of art.

OPP: In March 2012, you had your first all-sculpture solo exhibition, Joke's On Me. . .  at LeBasse Projects. The exhibition featured many recognizable childhood icons from cartoons, video games, books and movies such as Bart Simpson, Stay-Puft Marshmallow Man and Hello Kitty. What struck me are the facial expressions of these characters as you've recreated them. Many are neutral, but they read as desperately sad because we are so used to seeing these characters smiling. Do you think of them as sad?

YY: I like referencing the iconic childhood characters in my work because everyone has certain personal attachments to them. They are not necessary about my childhood. I enjoy altering the appearance of these iconic characters and giving them a slightly different look. I really don't think of them as having sad expressions. To me, they are neutral. It’s the oddness of them that excites me. 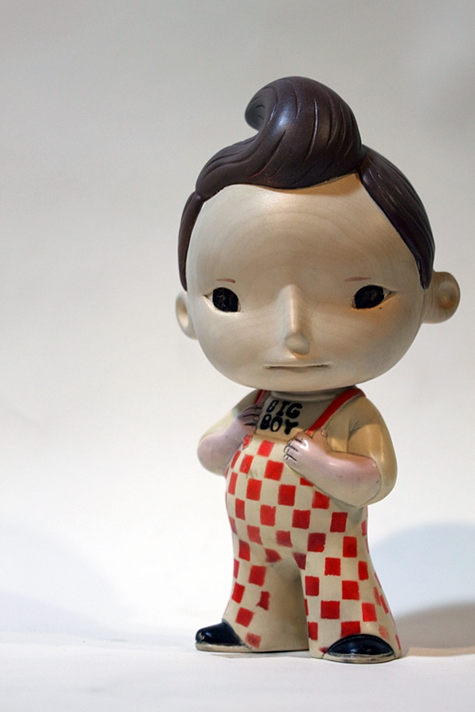 OPP: You use a lot of different fabrication methods for those sculptures, including plastic, cast resin and vinyl, but I'm most interested in the hand-sculpted basswood. When did you learn wood-carving?

YY: Woodcarving is the newest skill that I picked up for my sculptural work. Wood is more challenging than other materials that I use, but I love the organic look of the final product. When working with clay, you can always add more mass and volume as you need it. But when you are carving, once you take a piece off, that's it. You can't undo it.
I learned by trial and error, gaining a few scars on my left hand along the way. Now I wear cut-resistant gloves to protect my hands. :) 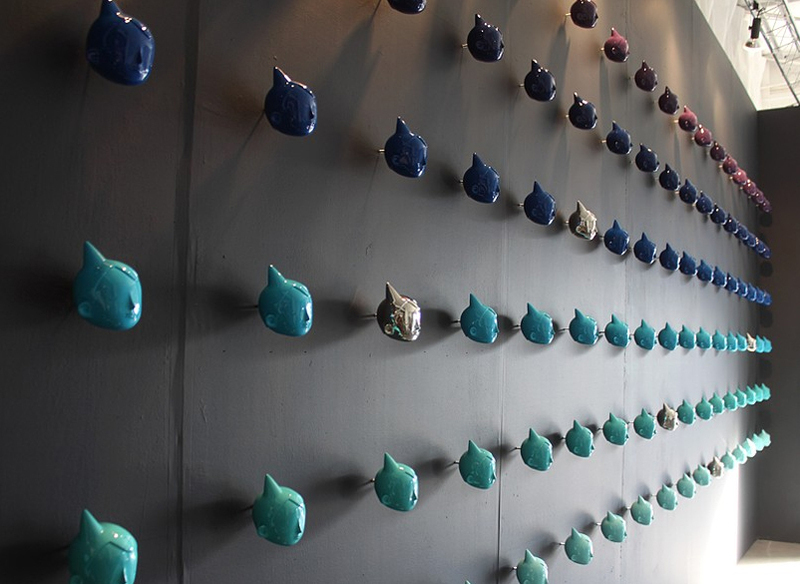 OPP: You are about to participate in a unique event in Hawaii. Tell us about it.

YY: Yes. In February I'm participating in Pow Wow Hawaii, in which a group of artists work together to paint murals in Hawaii for two weeks. Collaboration on the murals is really up to each individual artist. Since painting a mural is a territory I'm not too familiar, I think I'm gonna approach it with a basic idea in my mind.

OPP: What’s your favorite piece of yours? Why?

YY: My recent favorites are carry me away and I hope it will reach you eventually. These pieces helped me head in a different and new direction that I'm excited about. When I completed carry me away, I really felt more closely connected to my work than before. It's rare to have this sensation with my work so it felt pretty special. 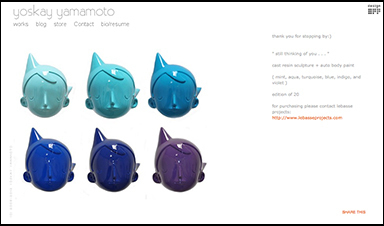