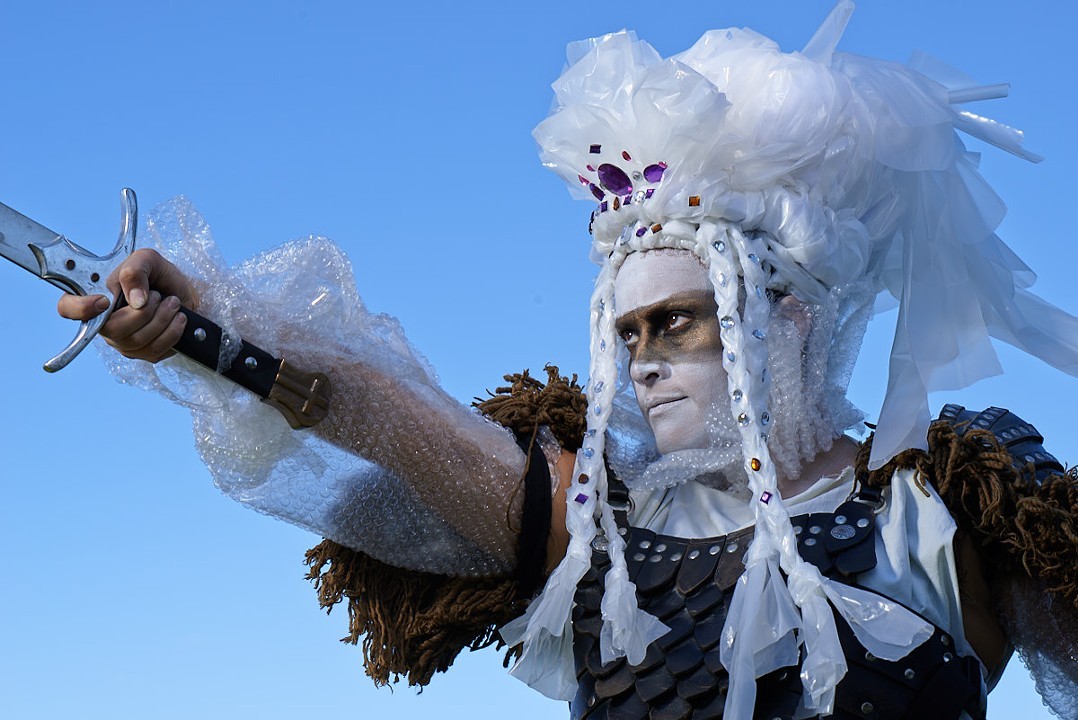 WANDA RAIMUNDI-ORTIZ explores the interplay between vulnerability and empowerment in the space where stereotypes, archetypes and lived experience of cultural and racial Otherness overlap. Since 2006, her persona Chuleta has unpretentiously educated YouTube viewers about the Art World. Her Wepa Woman murals tell the story of a NuyoRican superhero, who is charged with representing all her people and preserving their culture on top of having the deal with the regular stresses that all humans have. Most recently, in a suite of performances and photographs called Reinas, she holds court in a costumed manifestation of personal and universal anxieties. Wanda earned her AAS from the Fashion Institute of Technology in New York in 1995, was a 2002 Skowhegan Fellow and earned her MFA from Rutgers University in Brunswick, New Jersey in 2008. She has been awarded the Bronx Recognizes Its Own Award (2002 and 2006) and a Cultural Preservation Award from the Bronx River Alliance (2009). In 2011, she was named Keeper of the Creed by University of Central Florida, where she has been an Assistant Professor since 2010. She has exhibited nationally and internationally, including exhibitions at Museo de Arte de Puerto Rico, Institute of Contemporary Art at University of Pennsylvania, Centro Cultural de España in El Salvador. Wanda lives and works in Orlando, Florida.

OtherPeoplesPixels: For years, you've performed the persona of Chuleta on YouTube and live at events like Art In Odd Places 2012, New York City. When was Chuleta's first video posted and what's her origin story?

Wanda Raimundi-Ortiz: Chuleta first came on the scene end of 2006 as an examination of my own presence as a Latina artist visiting Art Basel. It was strange to be at these events, being examined as I walked with my fellow Latino artist friends and feeling like we maybe had infiltrated a world that we were actively engaged in. It was a surreal experience. I became very aware of my otherness in this space and wondered. . . how could I explain this career choice that seemed so. . . pretentious and elitist. . . to my ultra urban nieces and nephews? Somewhere between making fun of the gallerists, collectors and ourselves over drinks, Chuleta was born.

YouTube was still in its infancy—a sort of Wild West with nebulous borders. It seemed like a perfect place to create virtual presence, especially with art studio space at a premium. The earlier works were pretty rough and a bit long. But again. . . that was all pre-YouTube etiquette. I had no idea it (and she) would grow the way it did. It became a direct line to the public and a perfect vehicle to challenge expectations of both the art world and viewers.

OPP: Has her agenda (or your agenda for her) changed over time?

WRO: Chuleta and I have enjoyed a great run, but she has taken a break so that I can work on the Reinas, which are closer to my heart these days. Chuleta was a direct response to my life in New York and transitioning into academia. Five years after arriving in Florida, my interests, focus and inspirations are more internal and reflexive. She isn't gone, just dormant. I have been thinking of new iterations for her, now that I am changing, too. I’m older, chubbier. . . achier. . . and certainly wiser.

OPP: How has the space of YouTube affected the public's understanding of the videos? Do you ever get grossly misinterpreted? Do you ever get any flack for contributing to a stereotype about Puerto Rican women? How do you use the stereotype for your own purposes?

WRO: HA! I have certainly had my share of criticism and flat out insults like "You need an education" and "Who is this stupid b*tch?" Classier insults reminded me that Sonia Sotomayor was a supreme court judge and reprimanded me for what I was doing to the community. I recognize these self conscious voices. This is what happens to underrepresented people. We become very self conscious about how the (white) masses view and perceive us. It is like having a run in your stocking. Embarrassing. When one of us does something unpleasant, it is assumed that other people will think that the entire community is going to get taken down as a result. And they aren't wrong. Peggy McIntosh describes it perfectly in her article White Privilege: Unpacking the Invisible Knapsack. It is that charge, that responsibility to your entire community to represent yourself positively that I was grappling with, on both sides. In my real life, as a Bronx-bred, urban Other with a masters degree from Rutgers in the hood, I was challenged by my own as being a Wanna-Be-White girl or praised for being so "well spoken/articulate" by academics, collectors, etc. This was my way of fighting back. 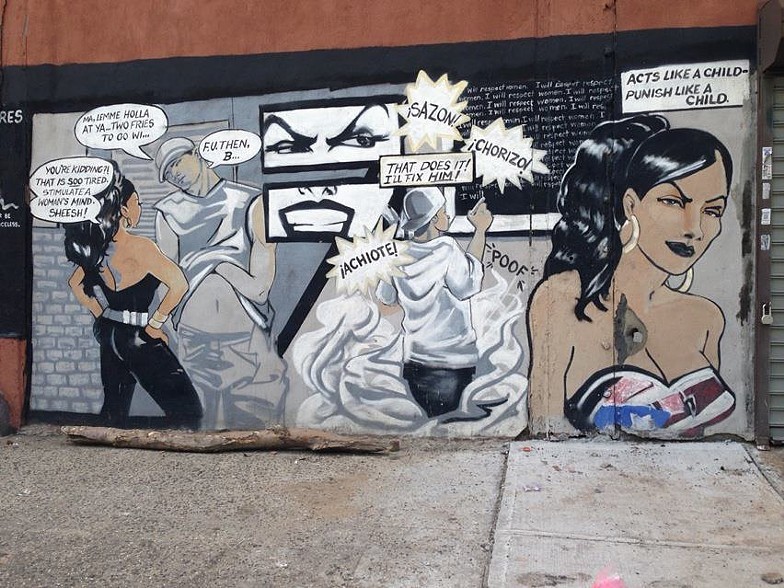 Wepa Woman: Acts Like a Child, Punish like a Child
Bronx NY
2013
OPP: You've also created comic-style murals and works on paper about "the NuyoRican super hero character Wepa Woman, who is charged with cultural preservation among her beloved NuyoRicans." Will you summarize her story for us?

WRO: I originally created Wepa Woman when I was about 19 years old in an effort to critique stereotypes because I felt like I was an oddity in the hood. I didn't look or act "Latina" enough because I was an artist into New Wave. I hung out with my fellow urban, artist oddball friends that made comics and created Wepa Woman. I was thinking of Wonder Woman, but her origins were ordinary. The real strength that she held was her conviction. The first appearance of Chuleta in my work was through the comic drawings. She was the antagonist, an amalgam of all the things I abhorred about the hood at the time. It, and she felt inescapable, and I wanted to badly to break out of that place and away from that stereotype and the long shadow it casts over us Latinas.

OPP: Is there an actual comic or just the murals? What does it mean for viewers to only encounter one panel of Wepa Woman's story?

WRO: There was no published comic, but the murals came from feeling confined to the page in my original drawings. I think I have a problem with enclosed spaces and ideologies (lol). The murals, also inspired by the hood, offered a different kind of accessibility. I wanted the murals to be accessible whether you knew her story or not. I wanted to insert intrigue into more of my practice. It worked! 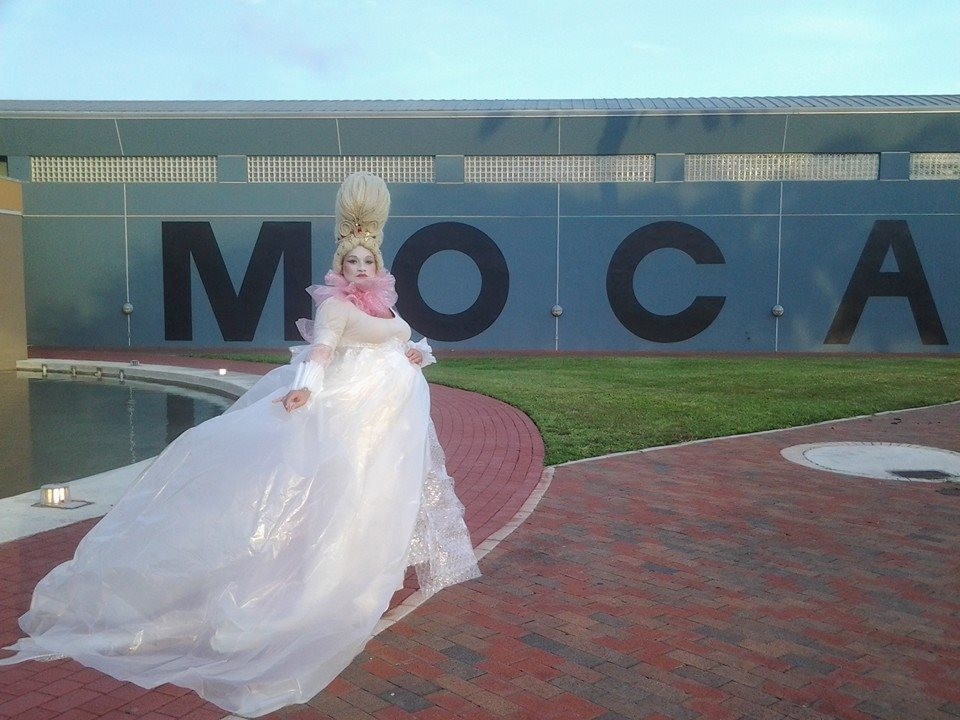 PorcelaReina #2
2014
Performance
PorcelaReina #2 is the third movement in a suite of performances and photographs from my most recent series REINAS (Queens). Made to emulate a porcelain doll, this queen's regalia is made nearly entirely from packing materials, in an effort to protect me during my most delicate time- pregnancy, and to explore my own discomfort and isolation with my own frailty.

OPP: Your most recent suite of performances is called Las Reinas, in which you hold court in some art space, often a museum. You performed Bargain Basement Sovereign (2012), for example, at the Atlantic Center for the Arts and PorcelaReina #2 at the Museum of Contemporary Art in North Miami, Florida in 2014. Which is you favorite Reina? Tell us about her costume, performance and viewers' responses?

WRO: My favorite Reina so far is GuerrilleReina, the warrior queen. The photos from that suite are really exquisite. I am thankful for my photographer, Jay Flynn, for being able to harness the warrior I was trying to create. This queen comes from many failed relationships; I found myself hardened, ready to defend myself, sometimes before anything had ever happened. The queen persona in me was protecting me—too well. The costume is designed with materials that are used to protect. But there is no one else in the battle. Just me.

The response is always great. I feel that people see themselves in these works. Chuleta puts people on the defensive. The queens are more. . . I don't want to say inviting. . . but they certainly aren't antagonizing. (Except for the warrior queen—lol)

All of the concepts hold clues to the individual queen. If you spend enough time investigating the wardrobe, you will gain more insight into her. I also like working with unusual materials. I don't want to lead readers too much. It spoils the fun. 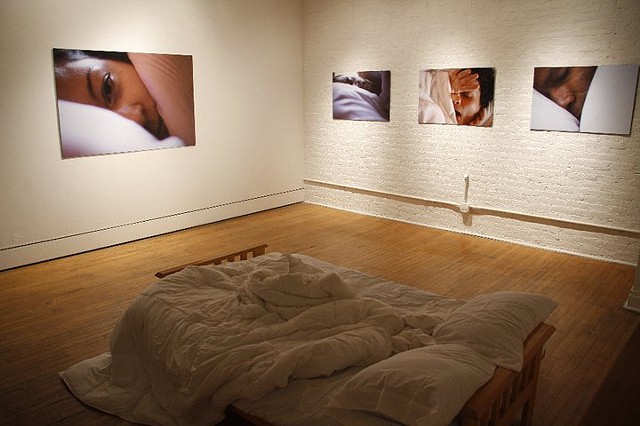 HUSH
2013
Installation view
For four hours I laid in bed in the gallery and welcomed visitors to lay with me, share secrets, joke or share stillness. Much like a confessional, the space becomes incredibly intimate in even the most public setting. Participants were then instructed to write their thoughts on a white wall in white chalk.

OPP: How do the various iterations of Hush, which is about intimacy, vulnerability and public space, inform your performances of Las Reinas and Chuleta? Are you yourself or another persona when lying in a bed in a gallery space?

WRO: I am myself in Hush. The concept for Hush predates the Reinas, and comes from a moment when I was craving intimacy in a very profound way. I knew that I wouldn't be alone in this. Being open and vulnerable in this way was the first time I saw the clear distinction between power and strength. Through the performances, I was able to completely subdue my urge to control or manipulate, antagonize or challenge. After each performance I would emerge covered in hives and almost no recollection of what occurred, other than a sense of being overwhelmed with other people's angst. I wouldn't be able to talk for a long while after. Only wanted to be alone in a quiet space and purge and cry. It is because of Hush that I know my other works as well as I do. I can't wait to do it again someday. 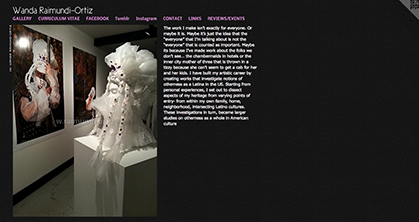