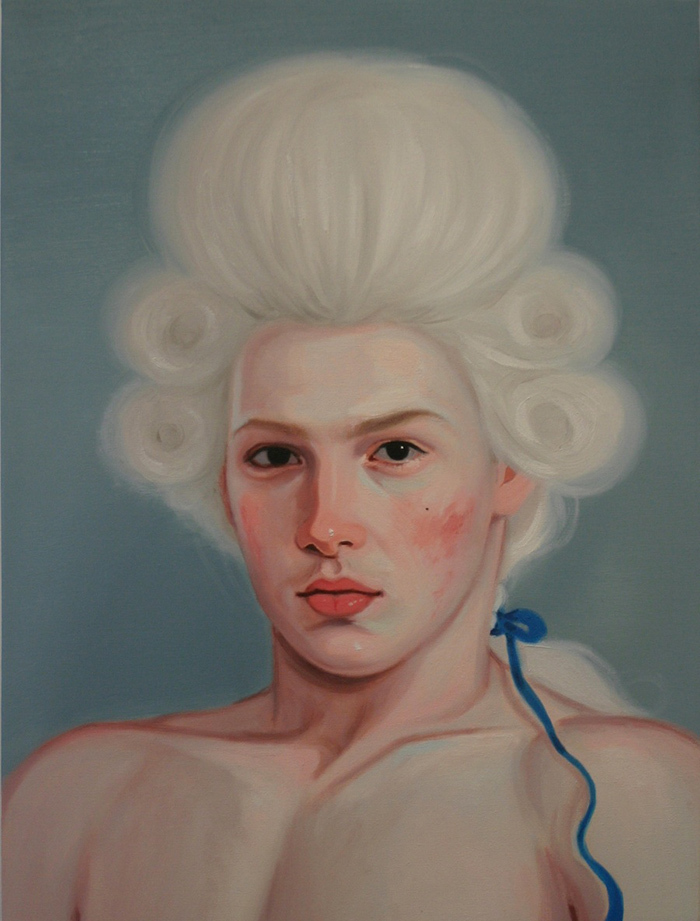 Painter KRIS KNIGHT repeatedly employs dichotomies in his narratives of rural escapism and imagination: hunter and hunted, naked and costumed, regal and common. His cast of androgynous characters embody vulnerability, alternatively concealing and revealing themselves as they play out romantic fantasies that appear both innocent and erotic. Kris graduated with honors from the Ontario College of Art and Design, Toronto. In 2013 he presented new work in a solo exhibition, Secrets Are The Things We Grow, at Mulherin + Pollard in New York and represented Katherine Mulherin Contemporary Art Projects at VOLTA NY with a solo project titled Blue Gaze.  Until June 30, 2013, his work can be seen in ROCK$THEM a group exhibition curated by Laura O'Reilly at Rox Gallery in New York. Kris lives and works in Toronto, Canada.

OtherPeoplesPixels: Do you consider your work to be portraiture in the traditional sense?

Kris Knight: The majority of my characters are based on real people—mostly friends and family—but sometimes they are come from the mass media. I start off with photo references as a template for my portraits, but then drop them halfway through the painting, often changing the sitter’s hair color and physical attributes altogether. I don’t adhere to the historical notion of the portrait, where the portrait has to be pleasing to the sitter or the patron to be deemed successful. For me, the sitter is a character that I use to help illustrate my narratives. There’s a lot more freedom when you remove the pressure of reproducing what already exists. 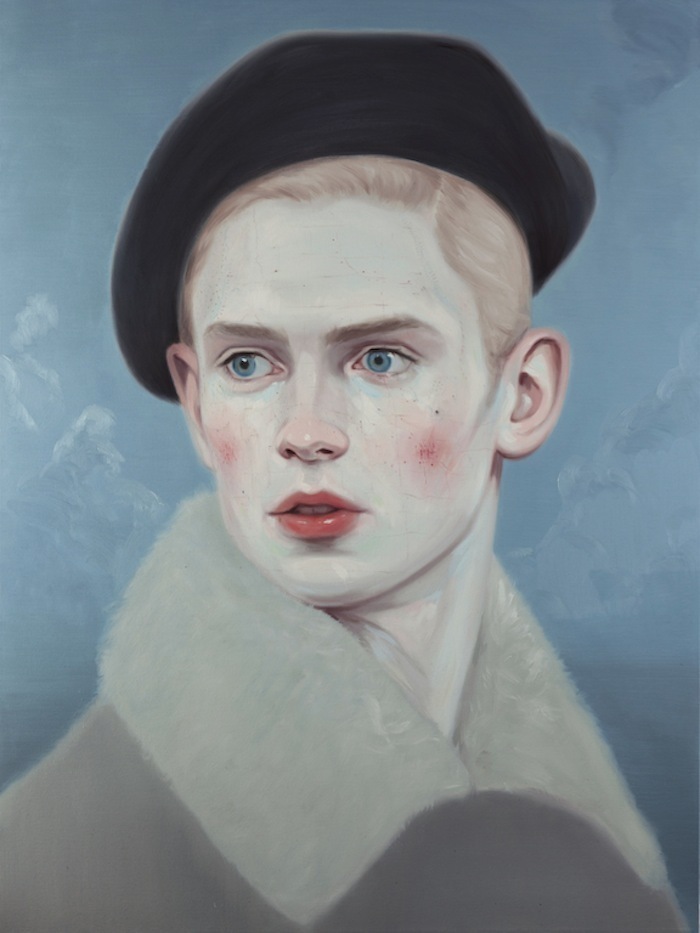 OPP: Your color palette is very consistent—lots of pastels and muted tones. Why do you choose these colors? How does color convey emotion in your work?

KK: I’m really inspired by the softer palette historically found in neoclassical portraiture, especially French 18th century portraiture. I’m drawn to the pastels and the ghostly skin tones found in the work of Joseph Ducreux and Louise Elisabeth Vigee Le Brun. There is something both luscious and decaying about their palettes that I hope translates in my work as well.

I love all things French Revolution, too, especially the portraiture of the aristocracy that was done during and right before this period. The heavy, white powder make-up that was in vogue at the time gave the sitters what we now consider a ghostly look. I’m fascinated by this act of concealment. They wanted to look like porcelain, without imperfection, because having a tan meant you were a commoner, a laborer. But we now know that this white, lead-based makeup was toxic. It slowly poisoned the people wearing it. Whenever anyone performs a front of perfection, it always fails in the end. Beauty is powerful and tragic; it declines as we decay, but we never stop trying to preserve it.

Color does trigger emotional response, as well. We attach our own histories to our senses, consciously or not. I want the colors of my palette to have the same sense of contradiction that my imagery has: equally vivid and deadening at the same time. 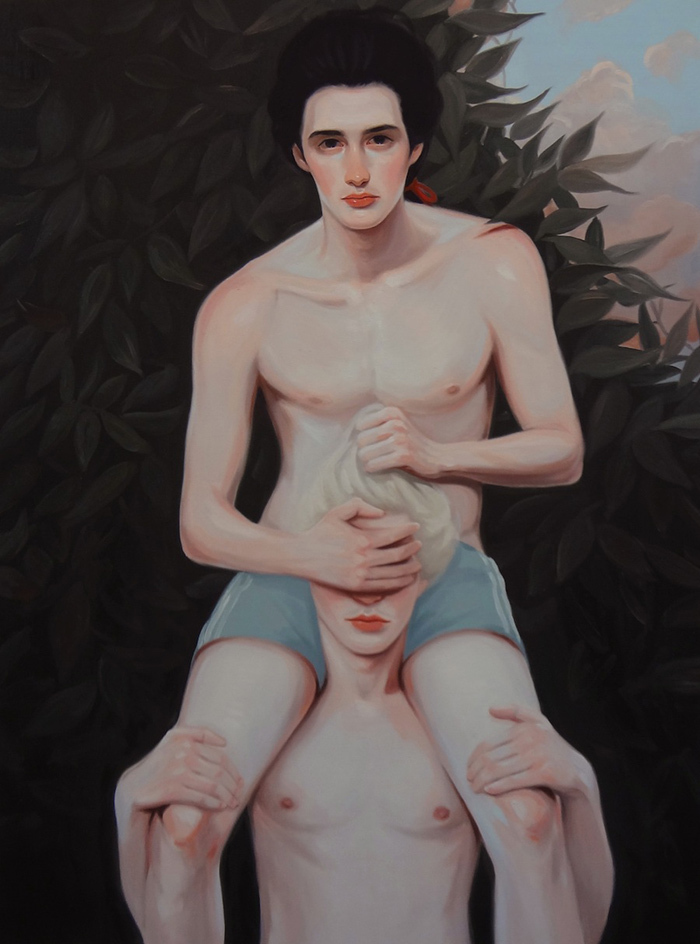 OPP: I noticed a recurrent visual motif of ineffective masks in your 2011-2012 solo show The Lost and Found. In paintings like Mischief, Caught and My Porcelain Life, these masks hide nothing about the identities of the subjects. They are more like decorative blindfolds that obscure vision rather than protect identity? How does this relate to the title of this body of work?

KK: I’m really interested in the dichotomy of sanctuary and susceptibility, especially in costume. My characters are often wearing elements of protection—sweaters, furs, masks—that are too delicate to protect or hide anything. I want my characters to be as guarded as they are vulnerable. The Lost and Found paintings are about a group of disenchanted youths who subtly play with roles of being the hunter and the hunted. As much as the characters in these paintings try to be lost, they are very much aware of who is watching them.

OPP: Is this about an abstract sense of voyeurism or do you have a specific watcher in mind? Are the characters complicit objects of the voyeur?

KK: In this series I definitely played with the concept of voyeurism but gravitated more towards the emotional state of what it is like to feel lost and how we come back from this place. All of my exhibition themes stem from my own experiences even though I paint other people. The Lost and Found series was my response to feeling a bit burnt out from too many deadlines. Since I graduated from art school ten years ago, I have been painting everyday, working insane hours in preparation for exhibitions. Sometimes I get overwhelmed with pressure. Sometimes I want to get lost, but I always seem to find my inspiration and my way back.

OPP: In much of your work, it appears that everyone is getting ready to go to a masquerade ball, but no one wants to finish dressing. Could you talk about the juxtaposition of costuming and nakedness in your work? How does this relate to androgyny and representations of gender, sexuality and/or asexuality? 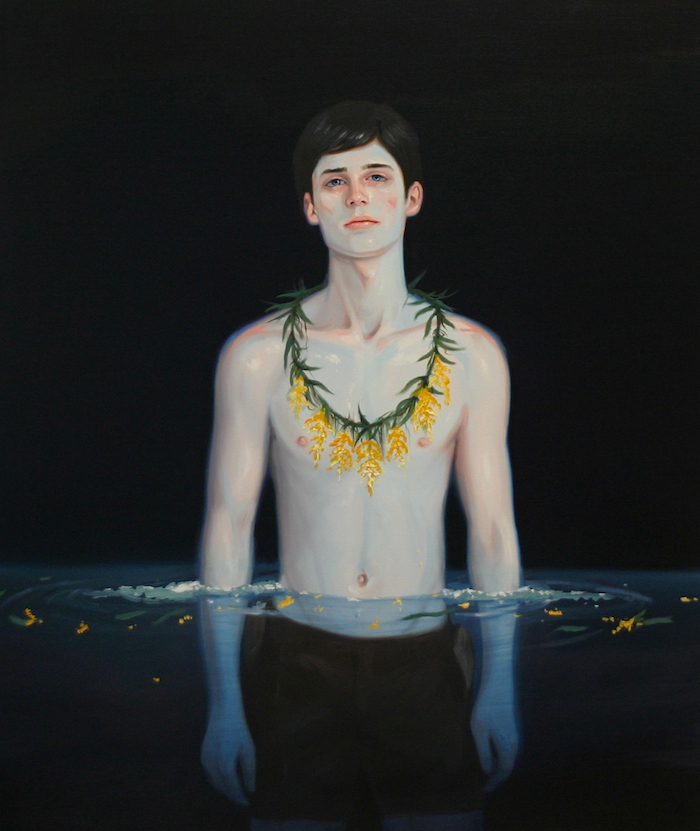 KK: When I first started painting professionally, I was interested in androgyny in terms of gender. Now I am more interested in creating neutrality and ambiguity in regards to mood. I like tiptoeing between dichotomies of hot and cold, especially in facial expression, atmosphere, palette and sex. Sometimes I want my characters to appear as virginal as possible, and other times I want them to appear overtly ostentatious in their sexuality. But, most of the time, I want them to fit right in between. I like confusing the viewer in the subtlest ways.

The characters I paint hide truths of who they are, where they come from and whom they love. They often put on airs of regality with elements of historical costume to mask the fact they are socially or economically the opposite. They long for the grandeur of the past and try their best to posture class, but their trashy tear-aways always give them away.

OPP: I wouldn't describe your paintings as stylistically campy, but I see and hear details that make me think of the discourse surrounding camp. Do you think of your work in those terms?

KK:  I love camp and use humor as a way to offset the seriousness in my work. My earlier works tended to be a lot more campy but now I approach camp and humor in a more subtle fashion. There are a lot of small elements of camp in my works that I find funny; these are responses to growing up gay in unromantic, small towns in rural Canada. I love a good knock-off Adidas two-stripe tracksuit, and I love a cheesy subversive title. 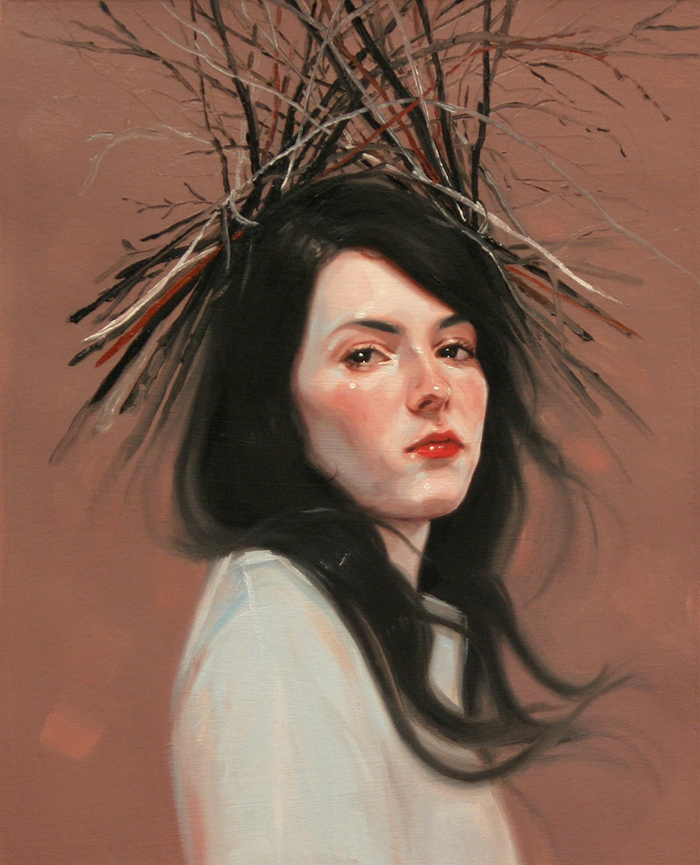 OPP: In a recent interview with Parker Bruce for Gayletter.com, you mentioned having worked in galleries for years and that that was a great learning experience. You are now represented by three galleries internationally: Katharine Mulherin Contemporary Art Projects in Toronto, Spinello Gallery in Miami and Rize Art Gallery in The Netherlands. Can you offer any practical advice for emerging artists who are seeking gallery representation?

KK: I think it’s a really amazing time to be an artist because we have an abundance of resources to help get our work out. I book the majority of my exhibitions and make the majority of my sales from curators and collectors seeing my images online. This obviously wouldn’t have been possible 20 years ago. I have key professional relationships with contacts around the world who have helped build my career. Some of them I’ve never met in person, and I may never meet them. I decided to be represented by galleries in the traditional sense, but that’s not the only way of making a career as an artist today. I have many friends who have built their audiences online. They are feverishly self-sufficient and have full control over their careers, all because they are Internet and online-media savvy. Again, this would not have been possible twenty years ago.

What’s key for an artist today is to have a good website and to have good documentation of current work. As for an artist seeking representation, it’s very much the same as applying for a job. Do your research. Seek out galleries that have a like-minded aesthetics and mandates that appeal to your own practice and where you are at in your career. 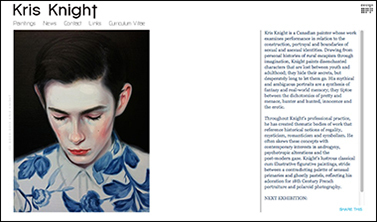