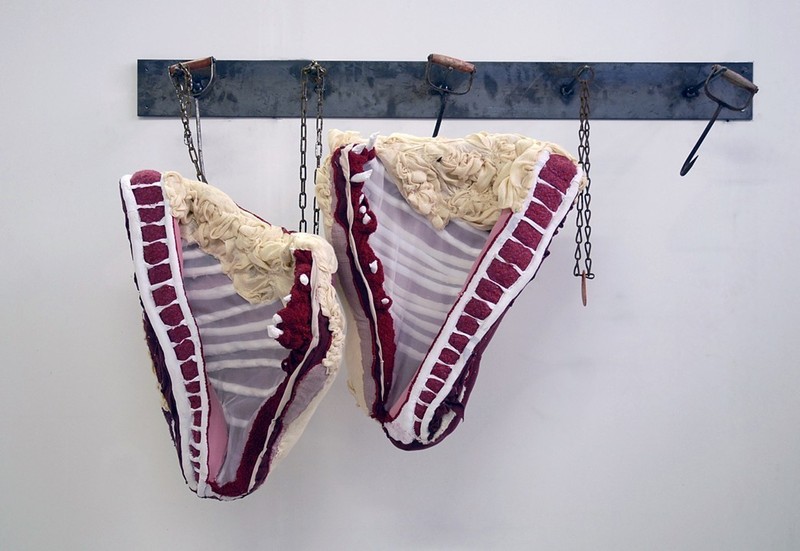 Jerusalem-born, Argentinian-raised TAMARA KOSTIANOVSKY "cannibalizes" her own clothing for raw materials, using the body as a site of connection between the violence perpetrated against humans and against animals. Drawing on her history as a painter, she expertly layers fabric to simulate flesh, ligaments and bone in soft sculptures of butchered meat and three-dimensional recreations of masterworks containing slaughtered animal carcasses. Tamara earned her BFA from the Escuela Nacional de Bellas Artes “Prilidiano Pueyrredón” in Buenos Aires, Argentina (1998) and her MFA from the Pennsylvania Academy of the Fine Arts, Philadelphia (2003). She has been the recipient of numerous grants, including a Pollock Krasner Foundation Award (2012), a John Simon Guggenheim Memorial Foundation Fellowship (2010) and a New York Foundation for the Arts Fellowship (2009). Apocryphal Times, a group show organized by Tamara and Thorsten Albertz, for Friedman Benda Gallery (New York) opens October 30, 2014. In two upcoming solo shows, The Still Lives will be exhibited at the Nevada Museum of Fine Art in Reno (January - July 2015) and then at El Museo del Barrio (January 2016) in New York City, where Tamara lives and works.

OtherPeoplesPixels: Most of your work employs both simulated and real butchered meat. But this work doesn't appear to be about vegetarianism or animal rights. They aren't sculptures of whole, slaughtered animal carcasses; they are butchered and ready for consumption. Could you talk generally about your interest and associations with the image of the slabs of meat?

Tamara Kostianovsky: Most of my work came about as a result of my experience working at a surgeon’s office, where veins exploded into waterfalls, cut ligaments set free the muscles they once contained, and chunks of fat poured over tissues of various colors and textures. An ambivalent fascination with these encounters put the torn body at the center of my work, over time allowing me to reflect on history, politics and the needs of the body.

These works are about violence; they express my frustration with senseless destruction, which of course applies to animals, but more so to humans. The recent history of South America and the violence associated with the military dictatorships of the 1970s was in my mind when I started working on the series of butchered cows. 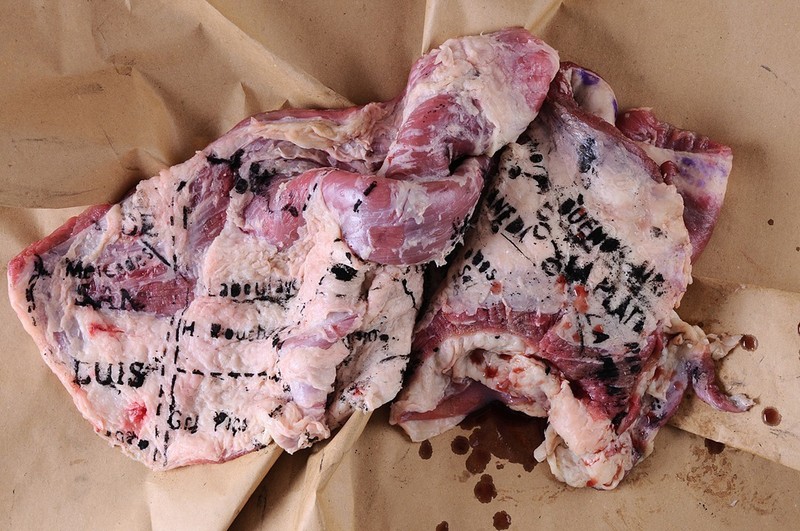 OPP: The photographic War Maps (2012) and the sculptural maps made from cured meat both explore historical conflicts over land boundaries. Why are the butchered bodies of animals the perfect medium to explore this theme?

TK: I was inspired to print maps onto fresh slabs of meat as a result of my interest in the depiction of the goddess Pachamama (usually translated as “Mother Earth”) that was developed by the South American people of the Andes during the 17th Century. In response to the enforcement of Christianity and its imagery, the native Americans rendered their ancient deity as the Virgin Mary with the body of a mountain: half-human, half-land. Playing on this proposition, I too decided to give a body to the land, printing maps onto fresh slabs of meat that later turned into entire meat continents that I cured in my studio. The series includes maps and pseudo-architectural models that speculate about possible futures for our lives.

OPP: The pieces in Actus Reus are amazing recreations of butchered meat that expertly avoid looking like cute stuffed animals, despite their soft, textile materials. How did you accomplish this? Did you work from images or from "life?"

TK: I work in an artisanal way. . . totally low-tech. Pretty much everything in my work is hand-made. I use discarded materials, primarily my own clothing. I often use photography as source material, but I actually work in a very traditional sculptural way: building forms, working and reworking the images until I am satisfied with their final form.

I usually spend a few of months on each piece. The first phase involves translating the image that inspired the piece into a three-dimensional form so that it feels simultaneously accurate and sculpturally interesting. Then I focus on the detail, paying attention to specific areas of the sculpture to create a sense of realism—which is mostly fictional. I put a lot of effort into exaggerating areas of each piece to make them look bloody, torn and freshly severed. Interestingly, it is the details that come from my imagination that look most realistic. 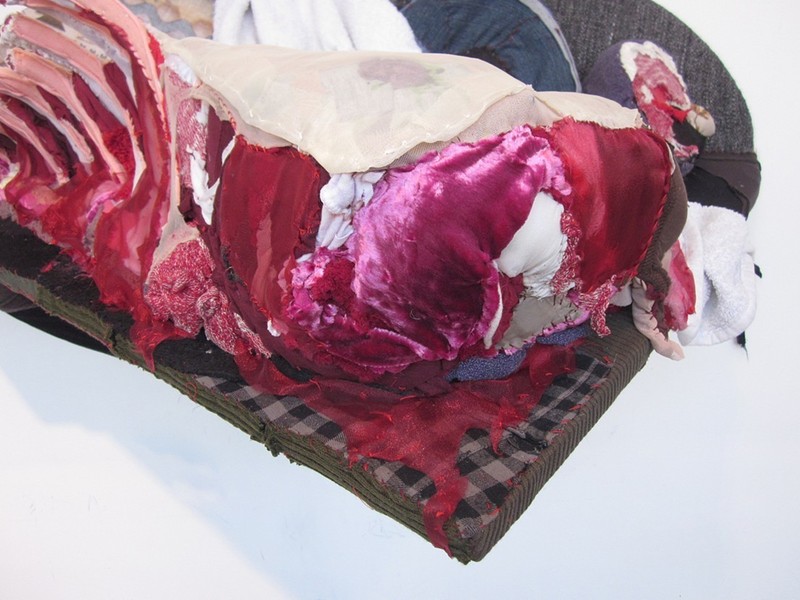 OPP: Before you began using your own wardrobe for material to make art, what were your sculptures like?

TK: I actually did very little sculpture before the introduction of clothing in my work. I was trained as a painter. My paintings were all about color, usually referencing something figurative like landscapes or still lifes. Color was key to me at the time, and I didn’t shy away from strong contrast and high saturation. Those experiences with color live on my current work. I often find myself fighting with painters’ problems such as balance, saturation and hue. I very much enjoy layering tones, especially in the  flesh, which I create by juxtaposing fabrics of diverse transparency levels.

OPP: That painting history makes a lot of sense now, considering The Still Lives, which reference several masterworks by Durer, Goya, Bruñuel, Aertsen and Carracci. Could you talk about this shift towards such well-known art historical references in your work?

TK: De Kooning famously said “Flesh was the reason oil paint was invented.” There are many examples throughout the history of Painting that point to the strong desire of artists to capture the richness of the flesh. The series exists in between realism and illusion. Often based on the experiments of Master Painters, the works play on the idea of recreating two-dimensional images in three-dimensions, which is the opposite of what painters have been doing for centuries. 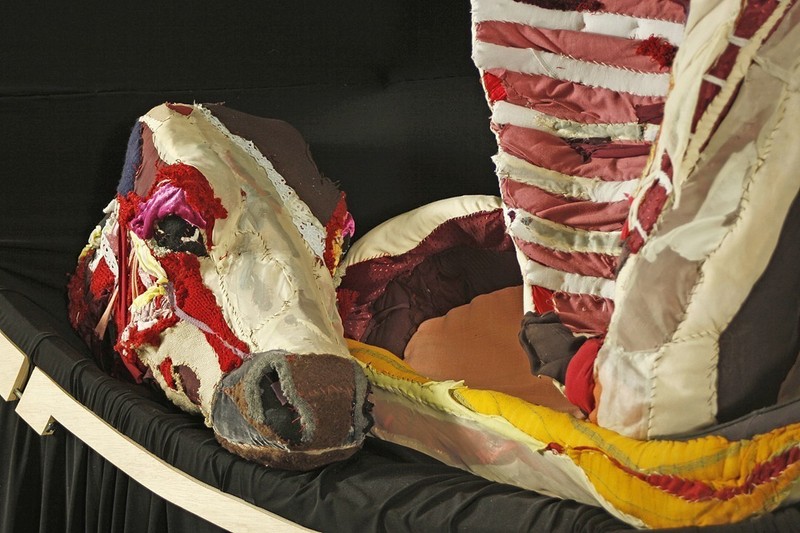 OPP: You often cite your predominant material as "clothing belonging to the artist" and you've used the term "cannibalize" to describe how you mine your own wardrobe for material. The term cannibalize really foregrounds the violence you are interested in, but it's such a different way of saying reuse or recycle, which foregrounds a mode of living which is the opposite of violent. Thoughts on this?

TK: Violence is the central theme of this body of work. There is something “sacrificial” about the appropriation of my own clothes. I use clothing to bridge the gap between human and animal violence. I strive to transform fabric into flayed flesh, gristle and bone. The manipulation of this material allows for me to unveil the architecture of violence that starts in the foods we eat and takes over our continents, our history, ourselves. 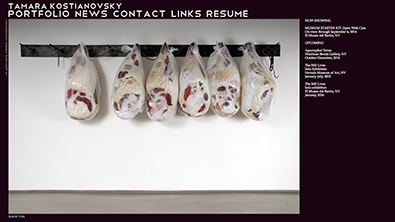 Featured Artist Interviews are conducted by Chicago-based, interdisciplinary artist Stacia Yeapanis. When she’s not writing for OPP, Stacia explores the relationship between repetition, desire and impermanence in cross-stitch embroideries, remix video, collage and impermanent installations. She is an instructor in the Department of Fiber and Material Studies at The School of the Art Institute of Chicago, where received her MFA in 2006, and was a 2012-2013 Mentor-in-Residence at BOLT in Chicago. Recent solo exhibitions include I Still Haven’t Found What I’m Looking For (2013) at Klemm Gallery, Siena Heights University (Adrian, Michigan) and Everything You Need is Already Here (2014) at Heaven Gallery in Chicago. Stacia recently created a site-responsive, collage installation in her hometown. NEXT: Emerging Virginia Artists runs until October 12, 2014 at the Peninsula Fine Arts Center in Newport News, VA. Here|Now, a two-person exhibition curated by MK Meador and also featuring the work of Jason Uriah White, is on view at Design Cloud in Chicago from July 25 - October, 24, 2014.