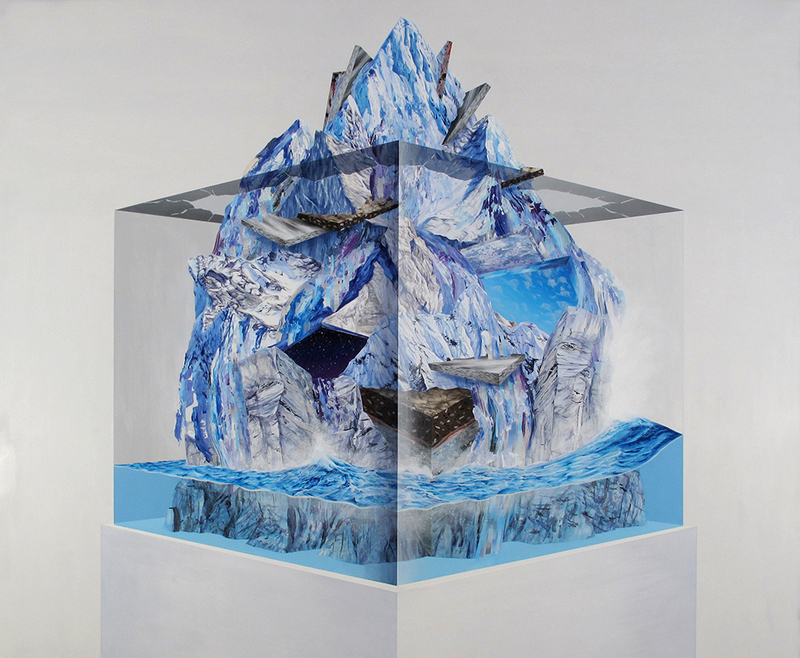 
ADAM FRIEDMAN is aware of the tropes of sublime nature. His chosen subject matter—mountains, sunsets, oceans and outer space—have all accumulated symbolic meanings through the lenses of science, literature, pop culture and art history. He merges these meanings in two-dimensional and three-dimensional paintings that bend the rules of perspective, space and time, representing the mysteries of nature rather than a realistic rendering of it. Adam received his MFA from the San Francisco Art Institute in 2008. He is represented by Eleanor Harwood Gallery in San Francisco, where he mounted his solo exhibition Space and Time, and Other Mysterious Aggregations in 2013. His upcoming solo exhibition Esoterica opens on March 7, 2014 at One Grand Gallery in Portland, Oregon, where Adam lives.

OtherPeoplesPixels: Mountains and glaciers are recurrent visual motifs in your work. What is so compelling about these landforms for you?

Adam Friedman: I’m originally from a small town in North Lake Tahoe. I literally grew up surrounded by some of the most epic mountains in the continental U.S. (if not the world!). My family eventually moved down to Encinitas in North County, near San Diego, where I became obsessed with the ocean. . . I was surfing, swimming, fishing almost every day. I have a deep-seated love for the great outdoors. For me, a snow capped mountain or a stormy ocean is the ultimate symbol of sublimity. Aside from my own personal investment in these motifs, there are art historical references. From the Hudson River School to Ed Ruscha and beyond, a large mountain has and always will be a powerful trope, simultaneously beautiful and terrifying. 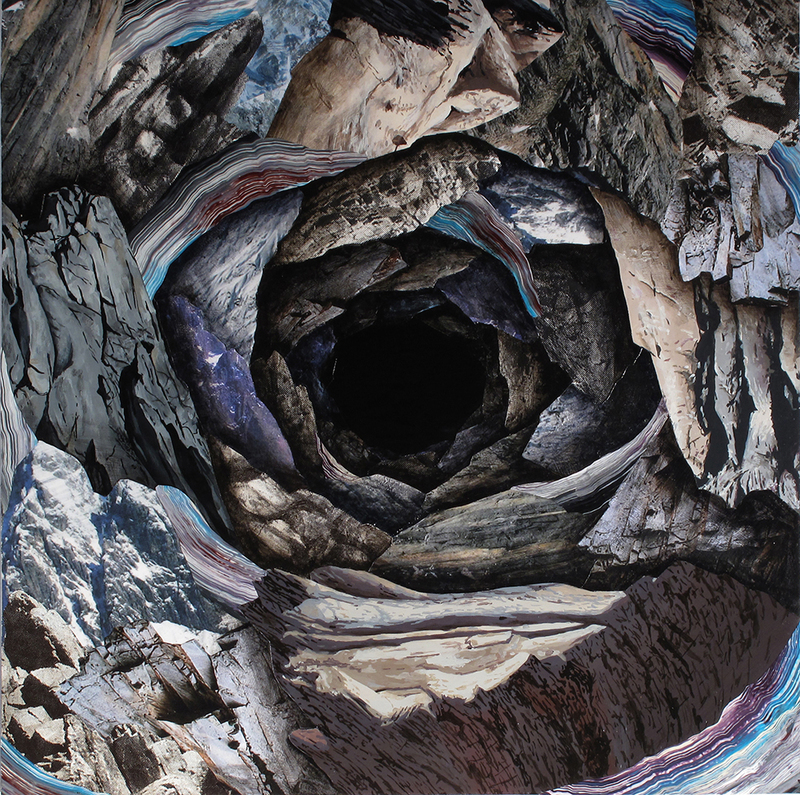 The Spiral of Time, The Black Whole of Space
2010
Acylic, Screen Print, Gel Transfers, and Collage on Panel
16"x 16"

OPP: An Impossible Ascendancy (2013), Never Still-Life (2013) and A False Assignment of Ownership (2012) are paintings of landscape sculptures sitting on familiar white pedestals. In each one, mountains or glaciers are breaking through the top of the glass case that is meant to contain or preserve them. Could you talk about the attempt to contain nature in art (or in general)?

AF: The vitrines/pedestals are recognizable as objects that we see in museums and galleries. These structures typically house articles of particular human accomplishment in art, science, history, etc. Through the lens of science, they represent understanding, as in a natural history museum. But there is a fine line between “understanding” and “ownership.” We name things, places, people and cultures so that we can begin to comprehend them. But in doing so—especially in the case of the natural world and the cosmos—we deny their overwhelming mystery. Painters, photographers and writers have tried for centuries to create representations of the awe-inspiring experience of nature. As powerful as they may be, they never adequately represent the real thing. The landscape sculptures breaking out of glass are my way of recognizing that human beings can never fully grasp, nor control nature. These pieces are about relishing in the mystery of it all.

OPP: Your newest paintings remind me of album covers for classic rock bands like Pink Floyd and Led Zeppelin. Is album art an influence for you?

AF: That’s awesome, and it’s something that I’ve heard a few times. I think that I’m more influenced by the music than the album covers. The album art is a sort of representation of the music, so it makes sense that I share a similar aesthetic. I love psych rock from the late sixties and seventies: Blue Cheer, Hawkwind, UFO, Zior, Ashkan, Tangerine Dream, Cactus, Captain Beyond. "Larks Tongues in Aspic" by King Crimson is one of my favorite albums of all time and has been highly influential for me over the years. Music is a HUGE part of my process. I typically spend 8 to 12 hours a day in the studio, listening to music the entire time, so it makes a lot of sense. 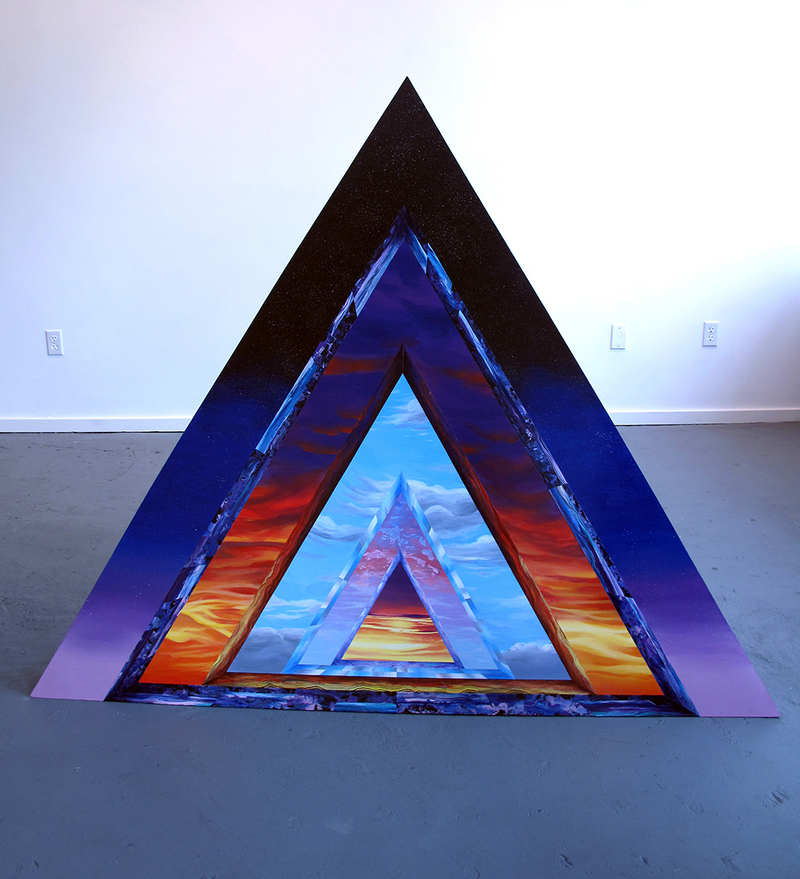 OPP: Could you talk about the integration of time into your paintings of space? I'm thinking of pieces like Oceans Before and Behind Us in Time (2010) and Bedrock and Paradox (2013).

AF: Time is present in a variety of ways. First off, my paintings take a long time to complete. I have friends that can finish work really quickly, and I’ve always been a bit envious of them. But I’ve learned to embrace my process and not try to force or rush things along. But more importantly, Time is conceptually interesting. For a human being, 100 years is a long time. . . But I paint landscapes. Geologically speaking, 100 million years isn’t very long. So our understanding of time is completely skewed as it relates to the cosmos and the bigger picture. We also understand time through the lens of space. For instance, if I stand on top of a mountain looking off towards the ocean, I understand that the ocean is far away based on how long I imagine it would take to get there. But time and space exist independently of one another, and the universe exists without all the binaries we use to understand it (time and space, up and down, in and out). So I like to make paintings that break the rules of those imposed binaries. Space and Time, for example, displays multiple locations folded on top of one another. Vanishing points don't follow typical rules of perspective, and objects in the foreground appear the be far off in the distance. 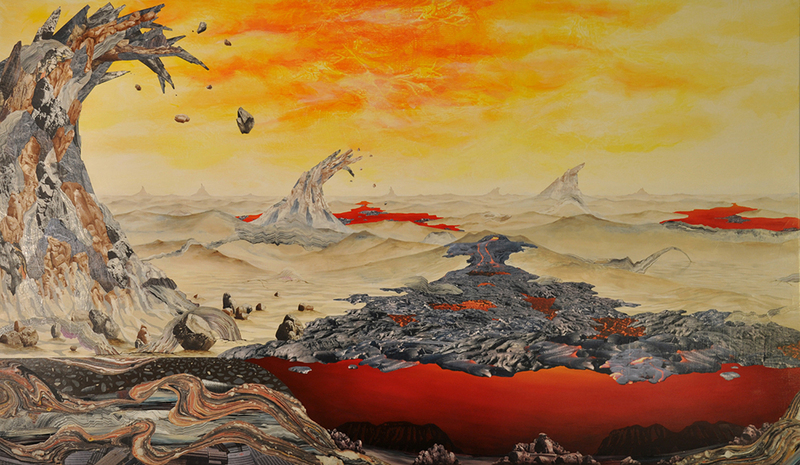 That Which Swells
2009
Acrylic, Screen Print, Gel Transfers, and Collage on Panel
35"x 60"

OPP: Before 2010, your works were collages on panel which involved acrylic, screen print and gel transfers. Now, you are working primarily in acrylic. What precipitated the change in media? How did the collage work lead to the new paintings?

AF: I started painting when I was really young, but became focused on printmaking in college. I had almost stopped painting entirely until I entered grad school. I began cutting up my prints and collaging them onto wood panels, basically making “paintings” again. Screen printing is inherently pretty flat, so I began reincorporating paint. Acrylic made sense for mixed media works. Slowly my love for the paint—feel, color, directness, process—took over, and I started using the printed media less and less. I barely use it at all anymore, but my years of printmaking have definitely influenced the way I paint. I’m very detail and process oriented. I apply paint in non-traditional ways. For instance, I often paint onto polyethylene plastic, peel it up and apply it to my panels with gel medium. It then gets painted over again. In this sense, it is a collage-like process, but I’m using all acrylic medium.

Recently, I’ve been moving towards three-dimensional work. I still consider them paintings, but they are also sculptural in nature. Sculpture has been a huge influence on my work lately through painting all of the pedestal imagery. I’m working towards a solo show that opens on March 7, 2014 at One Grand Gallery here in Portland. There will be a lot of three-dimensional paintings, as well as actual pedestals with objects under glass. 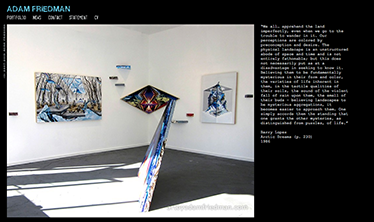