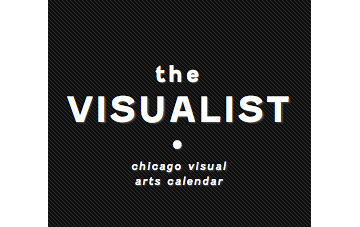 OtherPeoplesPixels is pleased to sponsor The Visualist, a Chicago visual arts calendar. OPP recently sat down with two of its three founders, Steve Ruiz and Chad Kouri, to chat about the project's inspiration, mission, and recent & upcoming highlights.

OtherPeoplesPixels: Your project, The Visualist: Chicago Visual Arts Calendar, follows On The Make, a calendar project developed by Karly Wildenhaus. Tell me about the history of both projects and how The Visualist came to be.

Steve Ruiz: Some quick history: Karly started On The Make with Brad Troemel back in 2009. Originally, the site was a more journalistic blog platform, but they pulled that down and reinvented it as a stripped down curated events calendar.

Chicago already had plenty of arts calendars in 2009—and still does—but the unique nature of the city's visual art scene meant it was more of a collection of smaller scenes, not all geographically related, which made it difficult to identify what was going on, where, and who would be interested in what. Additionally, many alternative spaces stayed away from advertising altogether, or passed info last minute on Facebook or twitter. On The Make's editors solved this by just focusing on those events that they were actually interested in attending, and this created a very valuable resource for a smaller insider audience of contemporary artists, curators, students, and professionals. While that sounds exclusive, most of the events they listed wouldn't have been covered anywhere else, and having a personally organized calendar was often most useful in conjunction with broader calendars.

Like many others, I used the hell out of On the Make and felt it was a crucial center for a community as spread out as Chicago's. I'm more of an artist / critic than a developer, but When Karly announced she'd be shutting the project down at the end of the summer, she and I met up and discussed the site and where she imagined it going. It wasn't until a few months later that I was able to get together with Chad [Kouri] and Jenny [Kendler] to put a successor project in motion. Karly passed us all of the data from On the Make and I spent August writing a new website around it according to Chad's killer designs.

I'd say The Visualist is our effort to provide the city of Chicago with a centralized calendar for visual art events. A lot more goes on than what I might add or approve, so I often encourage readers to check  ArtSlant, Chicago Art Map, Chicago Reader, NewCity, Bad at Sports, or other visual arts calendars or event lists. The value of The Visualist is its curation; every event I put on the site is something I'd personally recommend.

Chad Kouri: The whole idea for this site was to do one thing: showcase the best of the best events in the city and archive them in one place. No interviews, no blog posts, no commenting or any other content to muck it all up. There are a lot of calendars sites here in Chicago that are very well done in the city but they are all a small part of a bigger website and typically not super user friendly. Our goal was to have one site you can go if you were looking to go out that night / weekend and get in and out with the info you wanted without any of the info you don't need. Our Facebook Like Buttons are a good way for people to easily share an event with friends.

SR: I actually use Facebook heavily when gauging the events that are submitted. On its own, Facebook is a noisy calendar—but since new spaces open up all the time in Chicago, I'll check an unknown space's event listing there to see who's running it and who is attending. Occasionally I'll miss a name change or one-off event and only know what it is from the fact that half of my artist friends are planning on stopping by.

OPP: The Visualist is a project by three artists, yourselves (Chad Kouri and Steve Ruiz) and OtherPeoplesPixels co-founder Jenny Kendler. Can you talk about each of your art practices and other involvements in Chicago’s art(s) worlds?

CK: I co-run a collaborative art and design incubator called The Post Family with six other dudes. What other cool stuff am I involved in. . . hmmm. . . I art directed Proximity Magazine for a number of years here in the city and I have done numerous curatorial projects both online and in physical spaces: Co-prosperity Sphere, The Chicago Cultural Center and Chicago Urban Arts Society to name a few of the physical spaces. As for online stuff I started Margin Detail (a now defunct doodle blog), I write book reviews focusing on artist sketchbooks on book-by-its-cover.com and have done some guest writing on studiochicago.org. I've also shown my personal work at a handful of Chicago spaces including Ebersmoore, MVSEVM (rip), Johalla Proects, A+D Gallery and a handful of others. 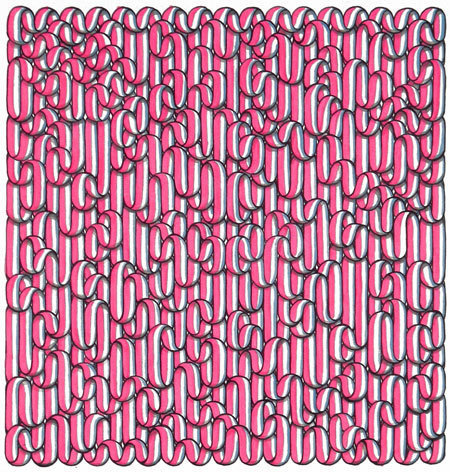 SR: I'm a practicing artist and writer who writes about art, currently working on my MFA at the University of Chicago, and recently described myself as an artist interested in what other artists do—the work they make, what they do with it, and the actions artist's take within their professional and social circles. Most people who know me probably know me by my writing, which I began as editor of Chicago Art Review and later on ArtSlant, Jettison Quarterly, NewCity, and for a little group I started on Facebook called #chiart to facilitate inter-art-generational conversation. My personal site is at steveruizart.com, but googling me is probably better.

In general, no matter what I'm working on, I try to operate in the community with a kind of active criticality. For example, I could write a paper about the importance of centralized calendars for dispersed communities, but that sounds a lot less interesting than just building a calendar and helping demonstrate that importance. Or I could complain about people my age not knowing what the Uncomfortable Spaces were, but I'd rather link them to spaces.org or invite them to #chiart. Chicago's art community is strongly defined by this kind of "go do something" criticism so I'm happy to be working within that tradition.

OPP: You are both incredibly informed about art events happening in Chicago. Do you make a point to attend much of what you post on The Visualist? What has impressed you recently?

CK: At this point Steve is doing most of the posting for the site. And he gives me some good ideas of what to attend! Most of the things I would add he is already on top of. But yes, I do try to go to as many arts events as I can each week. I average about 2-3 most weeks I think. Maybe a little less lately since I have been traveling for work. But going to art shows and lectures and such is free knowledge! Why avoid it?

SR: I'm from the western suburbs but didn't go to college in Chicago, so when I came back I think I over-compensated for that by going to as many shows as I could and writing like eighty reviews (or something equally reflective of how little else I was doing). That has dropped off a bit since starting grad school but I hope to continue to see plenty. Recent highlights have been Timothy Bergstrom / Volker Saul at Dan Devening Projects + Editions and Hennessy Youngman's presentation at the Museum of Contemporary Art.

OPP: What is next for you both and for The Visualist?

CK: I'm hoping to start a publication of my own in the coming year. In the short term working on a collaborative mural with Ina Weise, Rod Hunting, Nick Butcher, Nadine Nakanishi and Ryan Duggan... preparing to leave for Portland next week with Margot Harrington to speak at Portland State University and working on a show with Stephen Eichhorn and Cody Hudson at Purdue called Studio Vour that opens early 2012. Otherwise just lovin' life, catching some local jazz heads jammin' from time to time and trying not to rush around so much.

SR: I'm working with a few projects here at school, reading, making, and trying to avoid getting hit by cars. Philip Von Zweck's copy-machine project that I hosted at last year's MDW Fair is going to Performa in a few weeks so I'll have a drawing there for that, and a text piece in the next SCRIPTjr.nl. As always, a few other projects too up in the air to call. Trying to use Google+ more.

There are a lot of small improvements still on The Visualist's todo list, so once I get through those I'll be looking to improve the site's core functionality, streamline the event submission process, and perhaps include some of the post-event content that I demoed on Opencrit.com—user photos, critical collection, and carefully implemented commenting. However, like Chad mentioned above, we maintain a tight focus on what's up and what's good in Chicago's art.