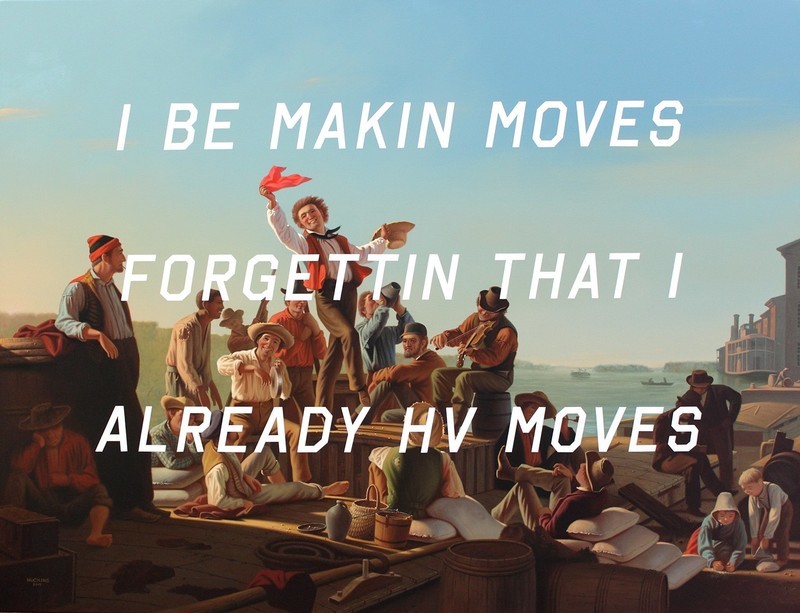 Painter SHAWN HUCKINS superimposes Facebook status updates and tweets on top of meticulous recreations of 19th and 20th century paintings. The appropriated text, rendered in large, blocky letters, stretches across the entire surface of each painting, acting as a screen through which we view the images of bygone eras. The juxtaposition of past and present offers us the opportunity to contemplate both what has changed and what is still the same. Shawn earned his BA from Keene State College in New Hampshire and has received grants from Connecticut Commission on Culture & Tourism (2010), from Artists’ Fellowship Inc. (2011 and 2012) and from The Haven Foundation (2013). He's had solo exhibitions at Foster/White Gallery (2012) in Seattle, L2Kontemporary (2012) in Los Angeles, Art & Soul Gallery (2014) in Boulder and Goodwin Fine Art (2015) in Denver. Shawn is represented by Goodwin Fine Art in Denver, Foster White Gallery in Seattle and Modernism Inc Gallery in San Francisco, where he will have a solo exhibition in Spring 2016. Shawn lives and works in Denver, Colorado.

OtherPeoplesPixels: Your practice rests heavily on the strategy of juxtaposition. It's the thread that connects Paint Chips to American Revolution and The American __tier. Does the juxtaposition in these different bodies of work function differently or have a different aim?

Shawn Huckins: The underlying theme to all my current, past and student work has been American culture.  At first, I was studying American architecture with store fronts, gas stations, and the like. Later, in Paint Chips, I was studying the mundane aspects of American culture by superimposing everyday life and objects on common paint cards people use to choose their bathroom colors: a Wal-Mart employee collecting carts, or automobiles laying in flood waters, for example. In my current series, The American __tier, I examine American language and its progression by contrasting two ways of life—one centuries past and the current social media driven society we live in today. 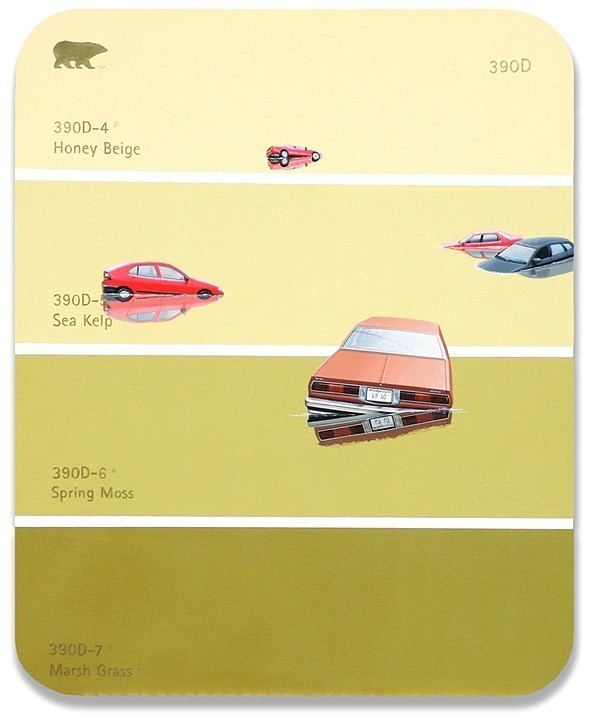 OPP: In American Revolution and The American __tier, you superimpose "21st century lexicons – Facebook status updates, tweets, texting acronyms"on carefully-rendered recreations of 18th and 19th century paintings and photographs. We literally read the image through the text. But we can also read the text through the image. Will you pick a favorite piece and talk about how the juxtaposition affects the meaning of both the text and the image?

SH: When I marry text to an image in the beginning phases of my paintings, I try to choose text that will work well with the image, and I use this process on the majority of my paintings. Sometimes, however, the text and image will have no direct correlation with one another.  For example, when I use simple phrases such as OMG or LMAO.

One of my favorite paintings is from American Revolution. The painting, titled Because He Has Swag And Knows How To Wear His Pants: Daniel Verplanck,  shows a seated, young boy in clothing that indicates he is from an upper class family. The text—CUZ HE HAS SWAG N KNOWS HOW TO WEAR HIS PANCE—came from a comment left on a photo of Justin Bieber wearing pants with the waist coming down to almost his knees. The juxtaposition of this young boy, who is formally dressed and really does know how to wear his pants, provides a provocative contrast to Bieber’s style of wearing pants. Not only do I contrast the way language has evolved over the centuries, but also how fashion has evolved and how the definition of what’s considered 'in,' like it or not, has changed. 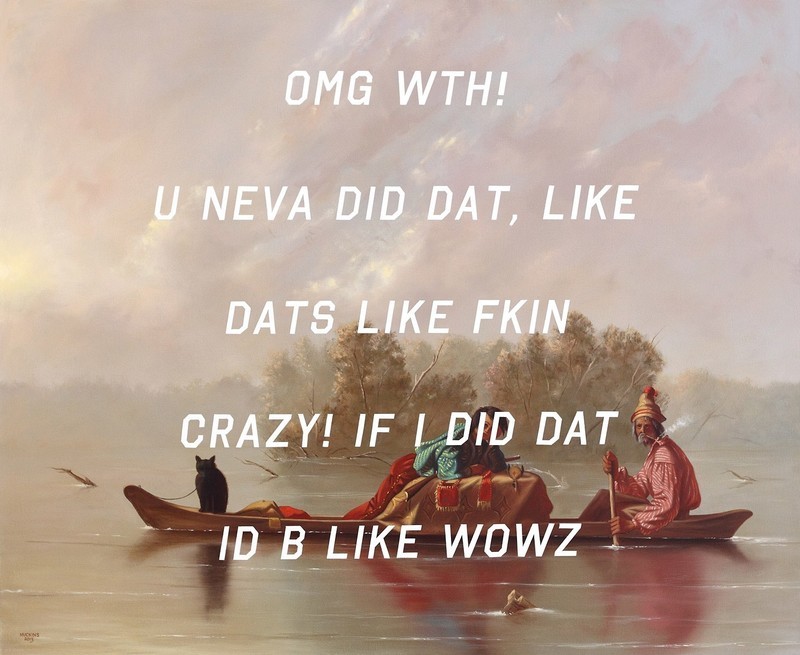 OPP: What's your process for and/or experience of collecting social media jargon? Is there a method? Do the sources matter to you? I'm curious if you follow specific people or just meander through random twitter feeds. Do you ever write the text?

SH: This is, bar none, my least favorite process. It involves sitting at a computer for a length of time looking for the right text to use. And it’s a lot more difficult than one would think seeing the thousands of texts/tweets sent every second. I have found an easier method, though, in my years of painting this particular series. In my everyday routine, I will come across a particular word or short phrase that I find interesting—for example, “everything is hilarious”—and make a note of it. When I’m ready to research texts,  I will search for that phrase for people using those keywords on Twitter and Facebook. This is far easier than trolling around various people’s twitter accounts to find that right phrase. Twitter is a great source for text because there is a limited amount of space a person can use, so it can be a potential gold mine. I never write my own phrases as I think it would sound too contrived. I will tweak and bend text to be more fitting to an image, but I will retain the meat of the text to keep it authentic to the original person’s intentions. 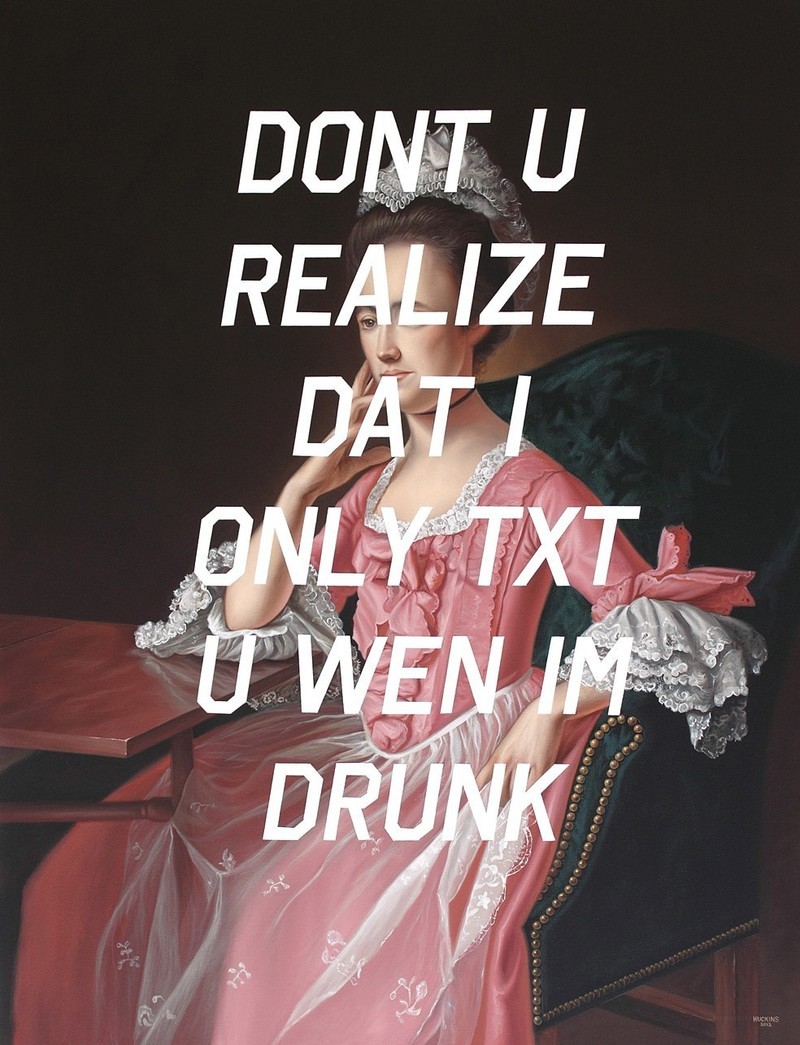 OPP: Do viewers who have never known a world without social media or the internet respond differently/understand the paintings in American Revolution and The American __tier differently than older viewers?

SH: Both young and old viewers appreciate the message I am representing with my paintings.  And yes, for different reasons. Older viewers understand the "old" ways of communication—letter, phone, in person—and see a stark difference in the way people communicate today. Younger viewers, who have always been immersed in social media, may appreciate the contrast of the old and new and may idolize a simpler way of life before the hoards of technology. I honestly thought that older viewers wouldn’t appreciate my work, but at one exhibition in 2012, an older man in his mid 70s acquired a painting on opening night.

OPP: What do you think about the concept of Progress? Are we evolving, devolving or staying exactly the same?

SH: In regards to becoming smarter, more efficient and healthier with advancing technology, I would say we are most certainly evolving at a rapid pace. Advancing technologies are wonderful and have had positive effects for the human population. But I also think with the abundance of technology, aspects such as human interaction and language could possibly be devolving. The human experience in regards to one-on-one interaction with another human being or even nature, is slowly becoming more and more distant. It’s safe to say that we have an emotional bond with our phones, but sometimes that bond puts strain on actual human relationships. 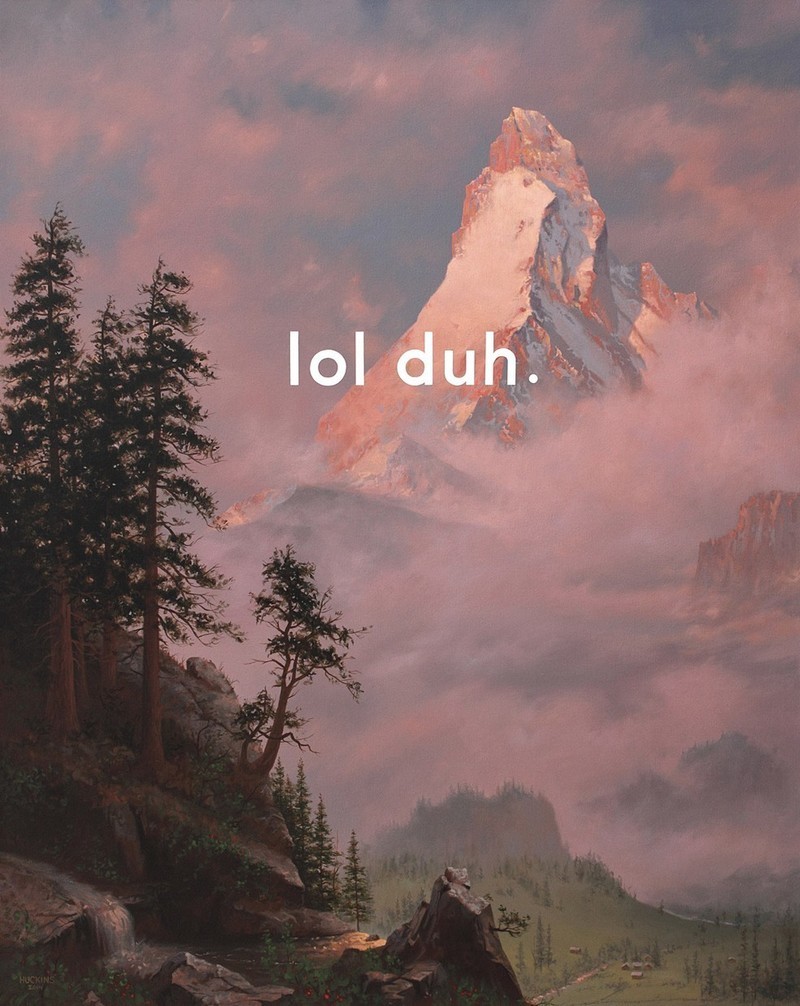 Sunrise On The Matterhorn: Laughing Out Loud Duh.
Acrylic on canvas
40 x 32 in (102 x 81 cm)
2014
OPP: Humans are often extolling or bemoaning the fact that things have either gotten better or worse. But I think humans are ultimately kinda the same, just with new conditions. When the printing press was invented, it caused the same kind of cultural, social and political upheaval that the internet has in our lifetime. Admittedly, the scope of change may be more extreme with the internet, but I think humans are basically the same. Some of us are open minded; some of us are not. Do you see any continuity between the culture represented in the paintings of the 19th and 20th century and the culture represented by the texts in the 21st century?

SH: I would agree that humans have been pretty much the same over the coarse of history. I wonder what people said when the light bulb came to market. Ha! Change can be uncomfortable for people. Some adapt to it, embracing it full force, and others want life to remain the same as it was in the "good old days." One main difference between the 19/20th and 21st centuries is the amount of images captured. The portraits painted in earlier centuries were mostly for the privileged upper class who could commission them.

Once the camera was invented, ordinary people could have a time stamp of their families at a more affordable price and moments were typically reserved for special events. Today, almost everyone has a smart phone with a camera, so anything and everything is photographed. Whether it be someone’s dinner for the night, a big night out or the cat. . . the abundance of images has grown exponentially. With that abundance, it’s harder to be in the moment and enjoy it. We're so busy capturing it with a camera that we miss the intimacy of the moment. 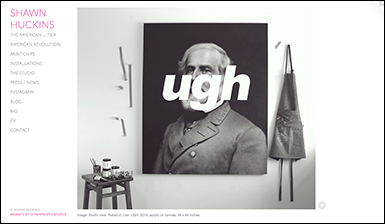 Featured Artist Interviews are conducted by Chicago-based, interdisciplinary artist Stacia Yeapanis. When she’s not writing for OPP, Stacia explores the relationship between repetition, desire and impermanence in cross-stitch embroideries, remix video, collage and impermanent installations. She is an instructor in the Department of Fiber and Material Studies at The School of the Art Institute of Chicago, where received her MFA in 2006, and was a 2012-2013 Mentor-in-Residence at BOLT in Chicago. Her solo exhibitions include I Still Haven’t Found What I’m Looking For (2013) at Klemm Gallery, Siena Heights University (Adrian, Michigan), Everything You Need is Already Here (2014) at Heaven Gallery (Chicago) and When Things Fall Apart, a durational, collage installation in the Annex Gallery at Lillstreet Art Center (Chicago). Form Unbound, a two-person show, also featuring the work of Aimée Beaubien, runs through December 19, 2015 at Dominican University's O’Connor Art Gallery (River Forest, IL).