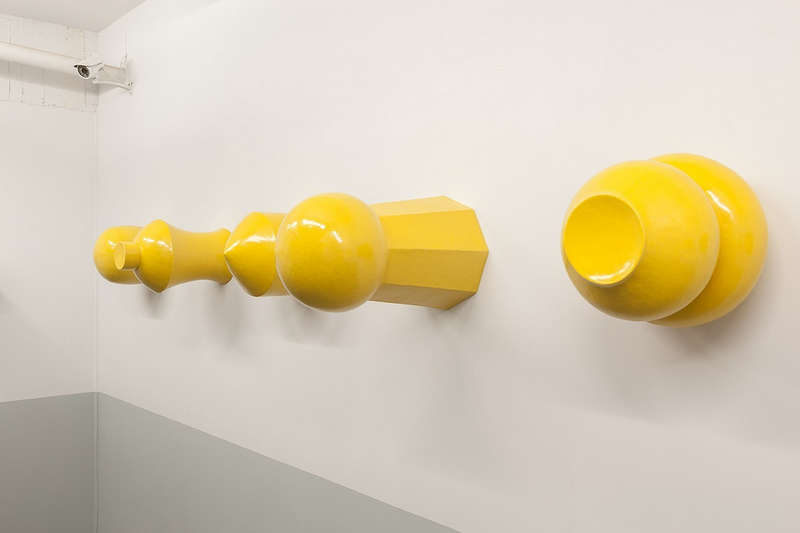 PEI-HSUAN WANG combines ceramics with found materials, both domestic and industrial,  in poetic arrangements that evoke the home. Abstract references to picture frames, house plants, curtains and ottomans hint at intimate, stable spaces, which seem to be the antidote to the disruption of international migration—from Taiwan to America and back again—that informs her practice. Pei-Hsuan received her BA from Macalester College in Minnesota and her MFA from Cranbrook Academy of Art in Michigan. In 2014, she had two solo exhibitions in Taipei, Taiwan: Mobile Scapehood at FreeS Art Space and Formation No.1: On Levitation at Bamboo Curtain Studio. In 2015, she has been an artist-in-residence at 1a Space in Hong Kong and European Ceramic Workcentre in the Netherlands. She lives and works in Taipei, Taiwan.

OtherPeoplesPixels: You were born and raised in Taiwan, earned your BFA and MFA in the U.S. and then returned to Taiwan in 2013. How has your personal experience of international migration affected the work you make?

Pei-Hsuan Wang: Taiwan is a country in constant struggle with its own identity. This has affected the mentality of many Taiwanese people: we are forever locating/relocating ourselves in this ever changing world with fluctuating powers. I left Taiwan unaware that a big part of what motivated my departure was the unfulfilled hole of not knowing who I was and where I came from in a "worldly" context. I had attempted to pass as someone "legitimate" by migrating West-ward. I did not see this until years later, of course. Being in the U.S. allowed me to reflect on my experiences occupying multiple spaces. I began to see Taiwan in a different light, and at the same time, view America from a critical perspective. All of these become things I think about in my work. 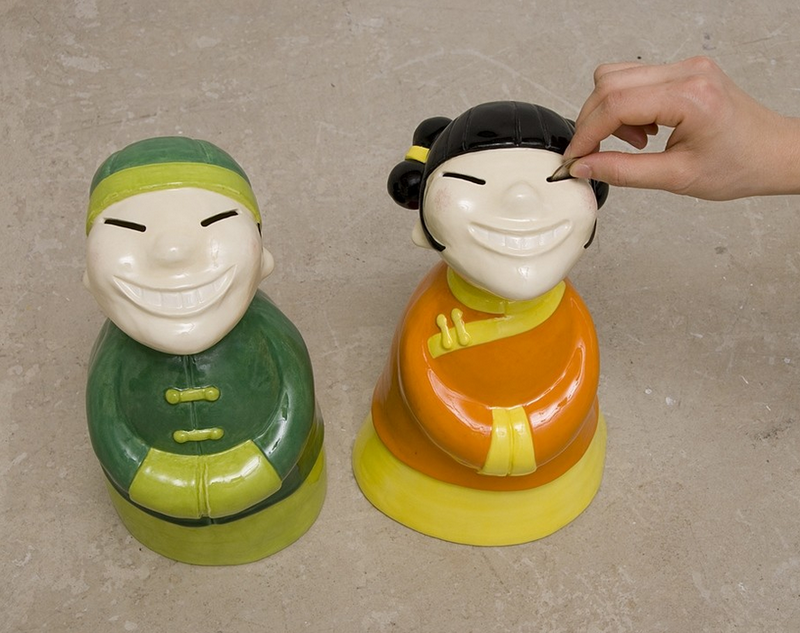 OPP: Earlier projects, Chinked-Out Factory and Asian Persuasion (both 2011), make overtly political statements about identity, the commodification of stereotypes and globalization? These projects are such a contrast to your recent installations, which I would describe as poetic and meandering as opposed to pointed and critical. What led to this shift?

PW: I often have ideas that I don't have time to follow through with yet. This is kind of what happened to Chinked-Out Factory and Asian Persuasion. They were meant to be long term endeavors. I was struggling to execute these projects in final forms, however, despite the fact that there existed already a variety of pieces in thought or sketch forms that could be made whenever I felt like it. I believe this has a lot to do with fear of perpetuating stereotypes and disseminating easily misinterpreted messages. I wonder if the satirical content is clear in the racially charged comments and caricatures I create, and if the work only appeals to those already aware of the things I want to talk about and therefore, remains a witty one-liner. I am still thinking about this.

The more poetic works are ways for me to ask questions rather than give answers or demand attention in approval. More thoughts are able to generate that way, for me and for the viewers. I am able to play more freely with ideas, materials and forms and to think as I make. Sometimes I come to no solid conclusion and I’m totally okay with that. Every piece becomes an experiment. 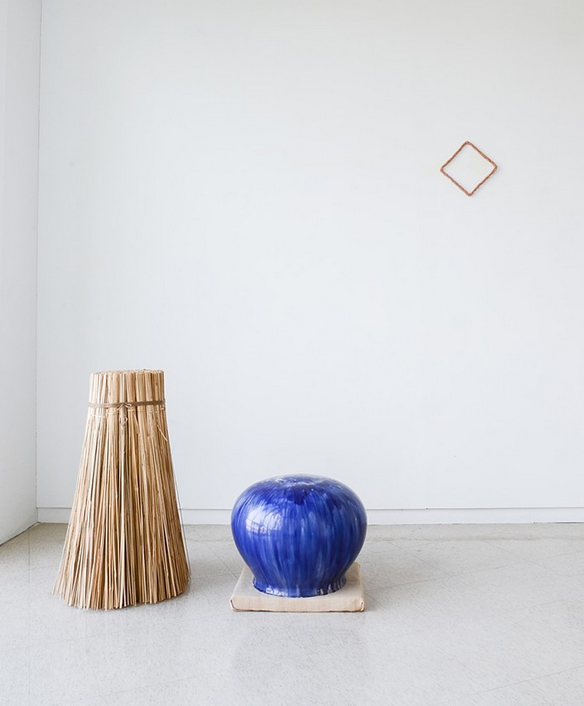 OPP: Throughout your sculptural oeuvre, I notice a lot of visual references to home decor. In some cases, you've used actual found furniture, as in In Transit (2011), but there are also more abstracted, poetic indications of picture frames, house plants, ottomans, carpets and curtains in Portal (2012) and Closer to Home (2013). Could you talk about the significance of these references?

PW: I like taking things that are dear and familiar to my experiences and turning them into something vaguely associative. These things become starting points to wonder. They can act as anchors to relate, in visual form or other forms. The fact that they are often home decor did not occur to me until you mentioned it in this question. I suppose I am interested in observing spaces and things in those spaces, however fitting or out of place. 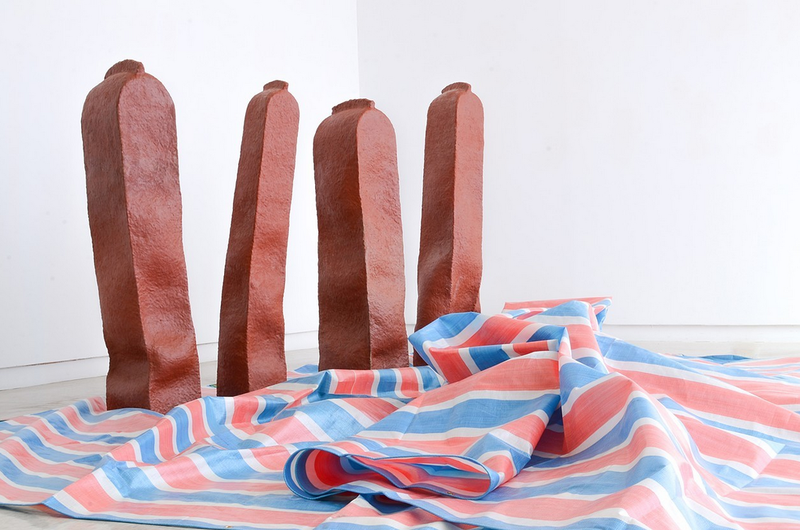 OPP: I love the images of Formation No.1: On Levitation (2014), your most recent exhibition, which show viewers/participants interacting with your sculptures. The Throne, for example, seemed so precarious until I saw the images with children climbing the wooden stairs. Does this audience participation relate to the sense of detachment you write about in your statement?

PW: Thank you. As a whole, the piece is a version of the more or less structured manifestation of my messy and multilayered thoughts at the time. I wanted the audience to experience the space and become a part of my thought form in visual realization. They were encouraged to participate and activate the installation, but were not imagined or anticipated in any way to "mean" something or relate to something to my work when I made the piece. I wanted to allow whatever happened to happen, and allow the piece to create its own extended stories, through whichever ways possible. 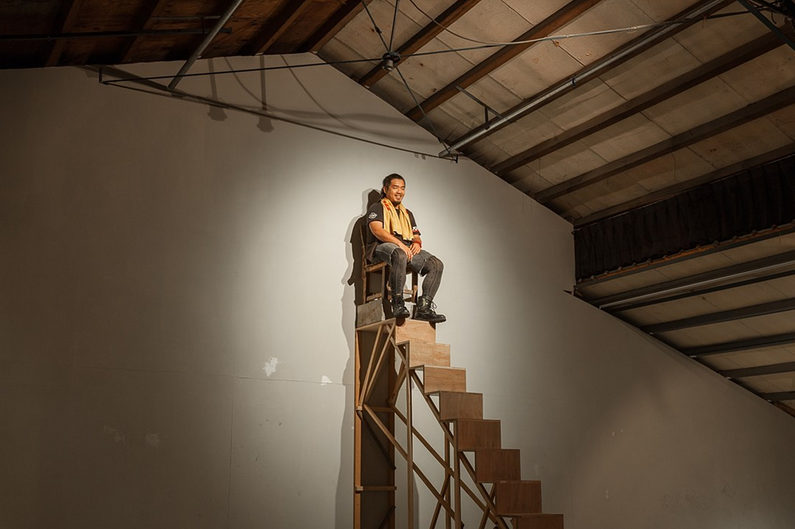 OPP: In asking that question, I was thinking that inviting participation with the work is a way to create a connection between you and your viewers that is beyond the visual. With the growth in Social Practice work over the last decade and a wider acceptance of materiality as on par with composition and form, the functions of fine art are in the process of being reconsidered and the boundaries are shifting—as they always do. It’s actually quite difficult to simply talk about “visual” art anymore, because so many artists are working in ways that engage other senses and the body and mind as a whole. Sometimes the word “viewer” is no longer accurate. I’m curious what you think about fine art’s history of privileging the eyes over other modes of perception. Is it changing?

PW: I do believe it is important that the participation of the "viewers" not be limited to the visual, but also other modes of perception—spacial, audio and corporeal—that are present in my work. We all have certain senses that we rely on over the others; this opens up more opportunities to explore ways of production and also ways of understanding. And I do think the experience and the awareness of the experience have become a big part of art practices in all disciplines. I believe it is going to be even more so in the future, with newer attempts to bridge peoples with ideas, which are never quite visual in the first place, in whatever ways we can. 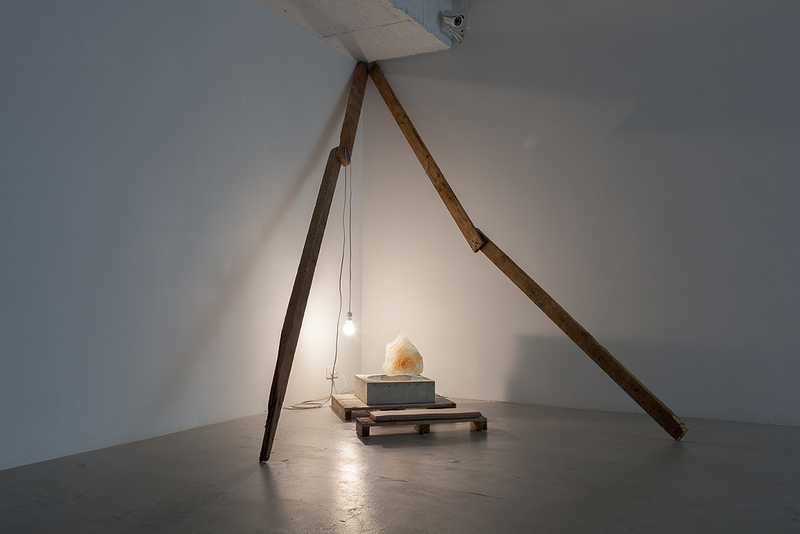 OPP: What's being worshiped in Altar, a piece in your most recent exhibition, Mobile Scapehood?

PW: The title Altar mainly referred to the feeling that the piece gave me personally. It was tucked in a quiet corner in an existing space and created a small space of its own, even though the structure seems semi-open to the eye. The niche space allowed one to kneel in cozily and study the textured details of the resin, which was in fact a messed-up cast with the wrong ratio of A-B parts, as well as the hole within the concrete shape, which was originally a custom-made piece for an industrial ventilation system in some factory in the city. The whole thing can be like a hollow mind space waiting to be filled with people's private thoughts. In that sense, the thing to be worshiped was absent. 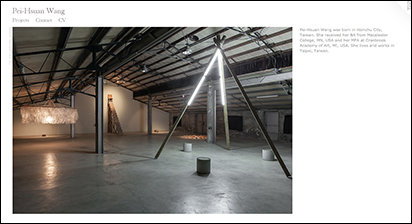 Featured Artist Interviews are conducted by Chicago-based, interdisciplinary artist Stacia Yeapanis. When she’s not writing for OPP, Stacia explores the relationship between repetition, desire and impermanence in cross-stitch embroideries, remix video, collage and impermanent installations. She is an instructor in the Department of Fiber and Material Studies at The School of the Art Institute of Chicago, where received her MFA in 2006, and was a 2012-2013 Mentor-in-Residence at BOLT in Chicago. Her solo exhibitions include I Still Haven’t Found What I’m Looking For (2013) at Klemm Gallery, Siena Heights University (Adrian, Michigan), Everything You Need is Already Here (2014) at Heaven Gallery (Chicago) and When Things Fall Apart, a durational, collage installation in the Annex Gallery at Lillstreet Art Center (Chicago). Form Unbound, a two-person show, also featuring the work of Aimée Beaubien, just opened at Dominican University's O’Connor Art Gallery (River Forest, IL) and runs through December 19, 2015.