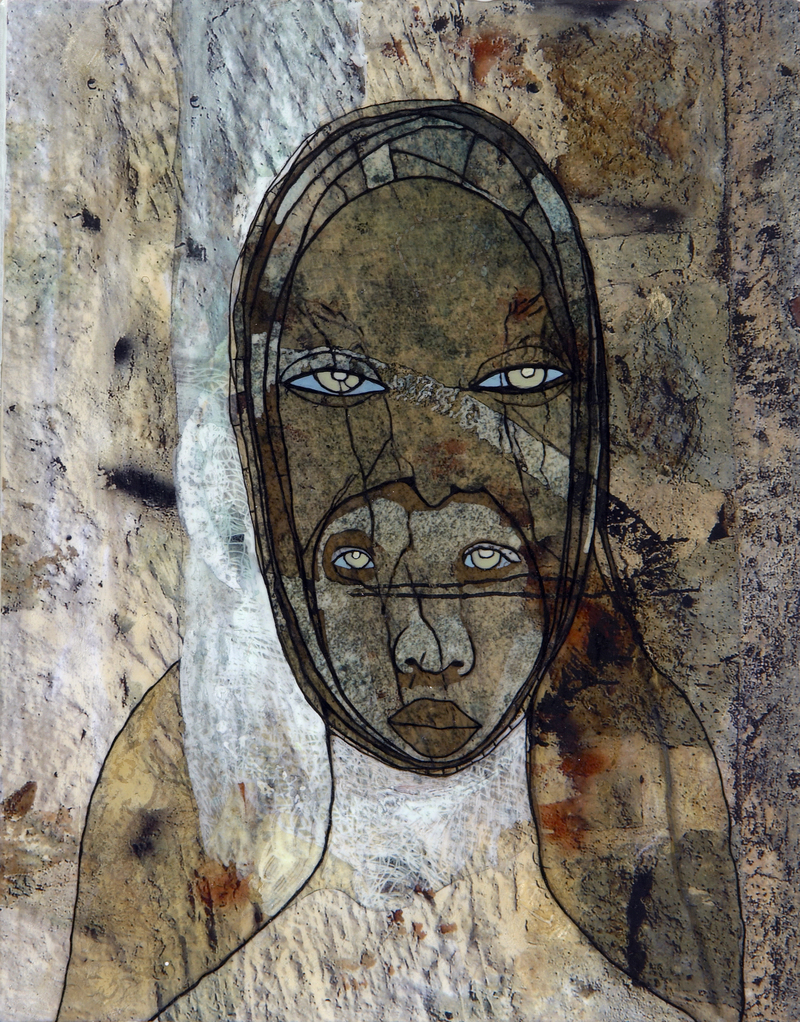 NAHUM FLORES (@nahum_a_flores) explores human emotion in drawing, painting and ceramics. His human figures and faces, often rendered in simple black lines, are profoundly expressive of the emotions associated with despair, loss, paranoia, dislocation and alienation, but they are not devoid of hope. The barren landscapes from which the characters emerge reflect Nahúm's personal experiences growing up in Honduras, surrounded by social upheaval and war, as well as his emigration from Honduras at the age of 14. Nahúm earned his BFA in Drawing and Painting at Ontario College of Art & Design in Toronto. He exhibits internationally with group shows in Canada, Honduras, United States, El Salvador, Mexico, Croatia, Guatemala and Costa Rica. His solo exhibitions include Los Herederos at Museum of National Identity (Honduras, 2016) and Inheritors at Articsók Gallery (Toronto, 2014). Nahúm has been the recipient of a Pollock–Krasner Foundation Grant (2012), a Toronto Arts Council Mid-career Project Grant (2014) and a Sustainable Arts Foundation Grant (2016). He is one-third of Z’Otz Collective, a collaboration with artists Ilyana Martinez and Erik Jerezano. Together they created Greeting Silence (2017) at Two Rivers Gallery in Prince George British Columbia. Nahúm lives and works in Toronto, Ontario, Canada.

OtherPeoplesPixels: The figures in your work are simply drawn, but evoke complicated human emotions. How does your drawing style contribute to the emotional intensity?

Nahúm Flores: Over a long time, I have been making ink drawings in small sketchbooks in a diary-like manner and in mixed media on canvas and wood panels where I fuse drawing and matter. In my drawings, I work quickly from one to the next, spontaneously filling sketchbooks with minute line depictions that are simple or naïve in nature, but evoke issues from a subconscious level. Little figures or characters appear on the surfaces animated by their surrounding environments. Some of them are in dialogue with one another. Some seduce me to respond viscerally to them with phrases that I write. Others mock the viewer and blur out words.

I find great freedom and comfort working in this impromptu fashion because I feel I establish a genuine communication with myself. It is like a mirror reflecting images of memory, which surfaces as a poetic language of drawing and matter. The merging characters are sometimes funny and other times somber, showing both a dark and soft side of humanity. The landscapes they inhabit are barren and reference my personal history growing up in Honduras. 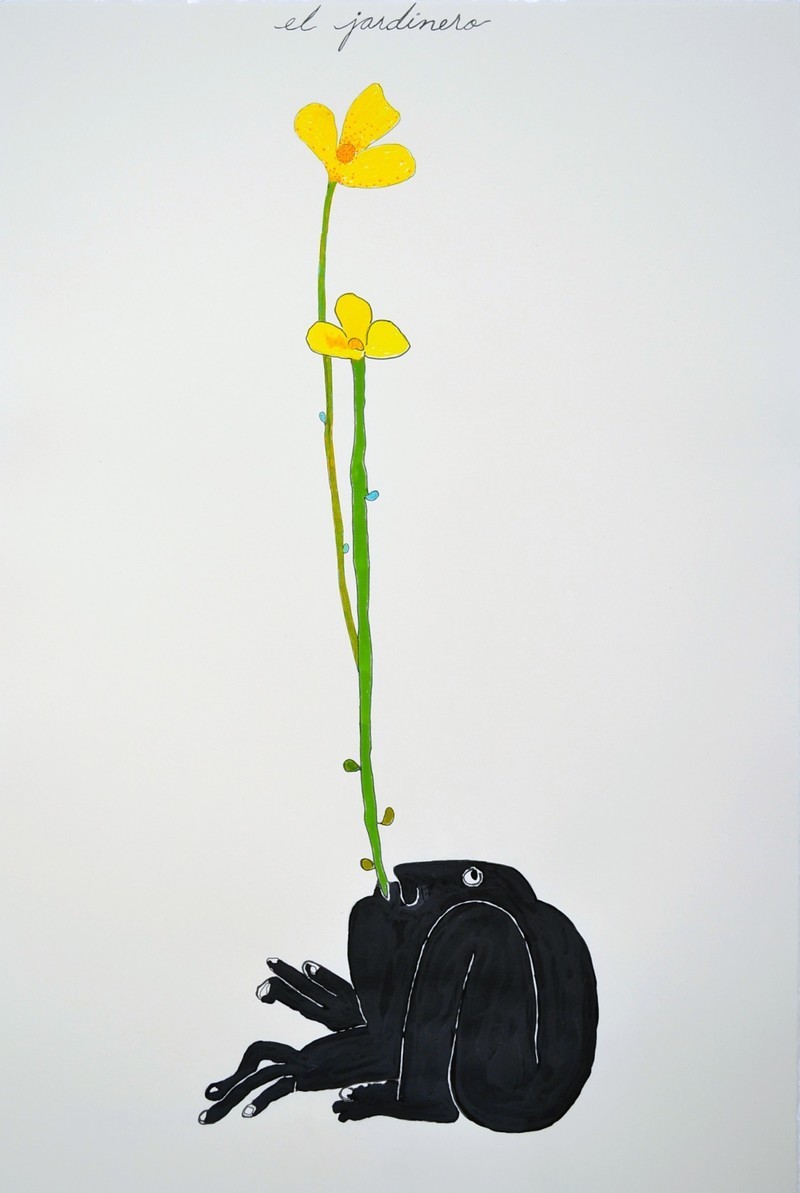 OPP: The figures are often really elongated or crouched down. Can you talk about these exaggerations?

NF: The process in which I work gives birth to characters in sequences. These characters dialogue with each other and linger in undefined spaces. They are characters of shifting identities that lure my imagination with ideas, interpretations and questions. Honduras is a country with both Indigenous and Catholic beliefs, and a lot of hybrid customs make their way into my work. The myth of the Cadejo is one I remember hearing the most when I was a kid. The Cadejo is a spirit that resembles a dog. There is a good one that is white and an evil one that is black. The Cadejo would appear to people at night, and it would transform from small to a big animal according to the curiosity of the viewer. They would visit houses in search of charcoal to eat in the bonfires. They loathed piloncillo (powdered brown sugar). The evil one would get you lost and make you crazy. This duality of good and bad is a theme that continually surfaces in my work. I see it as a metaphor of life. The dichotomy in my work is rooted in my beliefs, upbringing, and life experience. 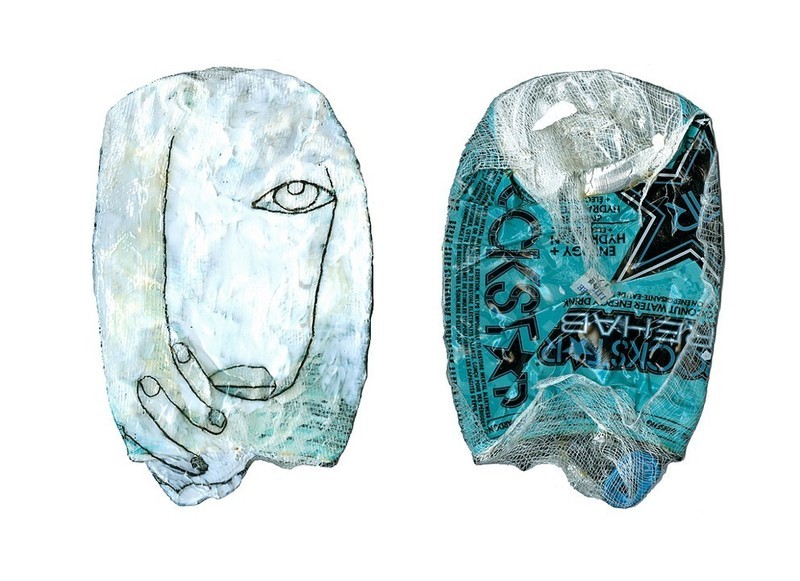 from series Shaped by the Journey, 2013. Mixed media on flattened pop-cans.

OPP: Tell us about the drawings on found garbage like sardine cans and crushed soda cans.

NF: My ongoing series Dwellings (sardine cans) and Shaped by the Journey (soda cans) consists of drawings on objects I picked up from the streets. These discarded cans contain environments and history; they are symbols of waste. The drawings comment on some of the conditions of im/migration: disorientation, alienation, displacement, dehumanization, hope and adaptation.

As a child in Honduras, I was influenced by, the social, economic, historical and environmental issues that shaped Central America in the 70s and 80s during the Cold War. Our everyday lives were affected by fear, paranoia, violence, poverty and war propaganda. I left my country of origin on my own at the age of 14, determined to find a better life, and experienced a challenging and incredible odyssey. I spent some years in Mexico and in the USA undocumented. This experience as a migrant drives me to reflect it through my work.

A dwelling or home is associated with permanence, stability and a sense of place, often lacking in many migrants’ lives. In these drawings set within the objects, characters or dwellers peek out of their homes wearing mask-like faces. They appear to conceal their true nature.

In the series, Shaped by the Journey I use beverage cans that have endured hardship (e.g. being squashed by cars). I animate their beat-up discarded forms with characters that reveal multiple emotions. With tender irony and humor, my goal is to communicate a sense of containment and intimacy with these objects. 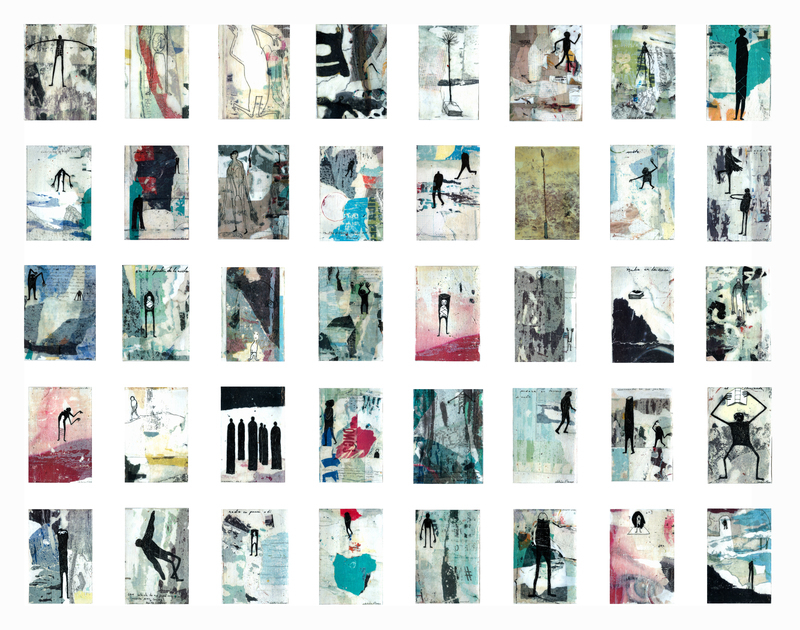 Clouds in the House, mixed media on canvas, 2017

OPP: The large paintings seem more about place and artifact than about the figure or human emotion. I’m thinking about Stones of Light, Puddles, Windows of Wonder (all 2011), as well as In the Distance (2013). Can you talk about these works?

NF: A lot of my work is about memory and history. Memory of places, journeys, time, music, foods, books and people. When I work in large formats, I employ layers over layer of water-based and organic materials. The juxtaposition of these layers of materials mirrors terrains that denote history and buried pasts that yields to new realities and way of interpretation. The works you mention remind me of travels in Mesoamerica and Mexico to pre-Columbian archeological sites, such as Copan, Teotihuacan, Xochicalco. I am mesmerized by ancient Mesoamerican mythologies. When I travel to this region I feel their powerful presence. 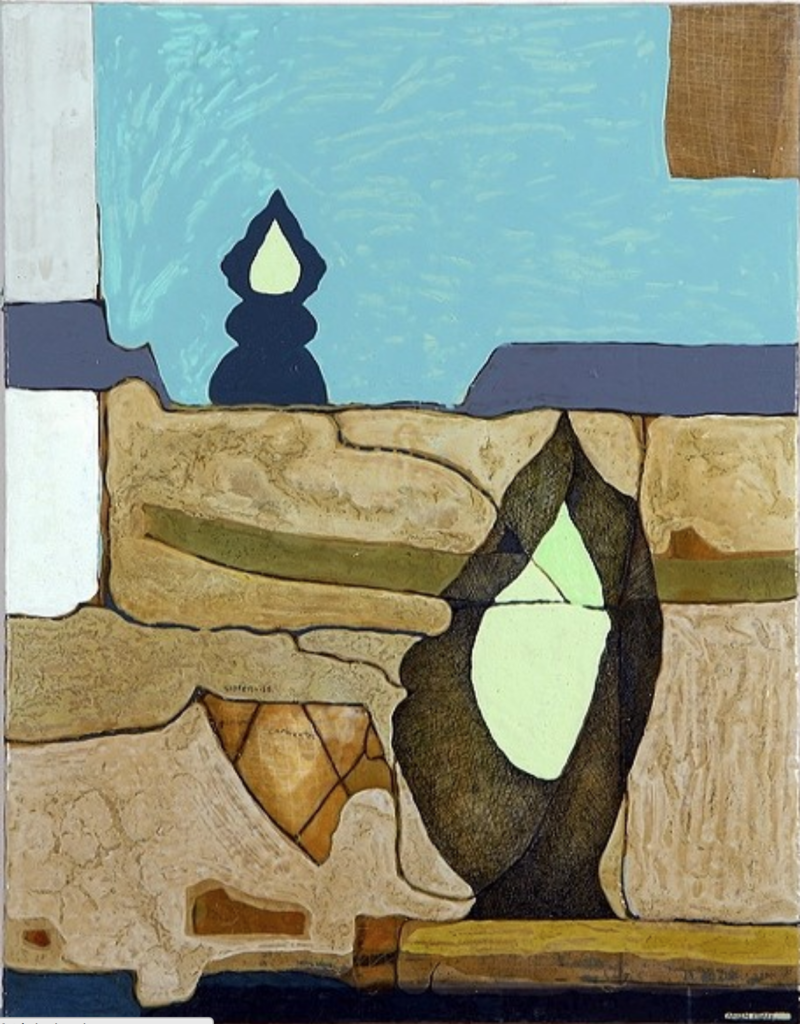 OPP: I love the terracotta sculptures that are conglomerations of animals and humans all mashed together. The rendering of the animals and faces is certainly reminicent of Mesoamerican art. When did you first start working in ceramics? What does this new avenue add to your work that wasn't there before?

NF: I started working in ceramics in 2007. I find the material flexible and it allows me to explore with different visual elements. It also connects me to memories of childhood. When I was a child, I played with clay with my cousins in my village. We created characters from our imagination. Those characters would form part of our game worlds. 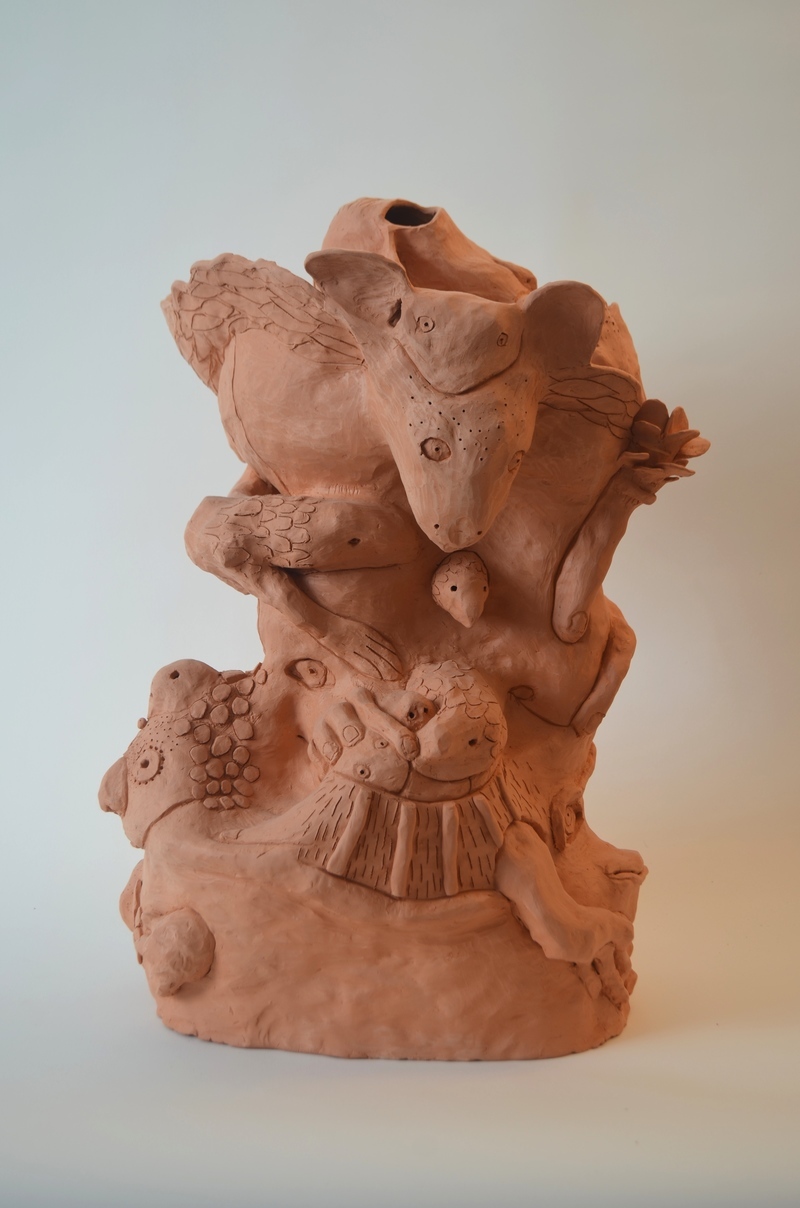 OPP: Is working in 3D changing the way you make drawings?

NF: One of the amazing things with clay is that it allows you to draw, to play with volume, to add and subtract, to play with different spaces. Working in 3D teaches me different alternatives to do drawings, using different tools, but it also connects me to pre-Hispanic people, to the animistic elements of their culture. 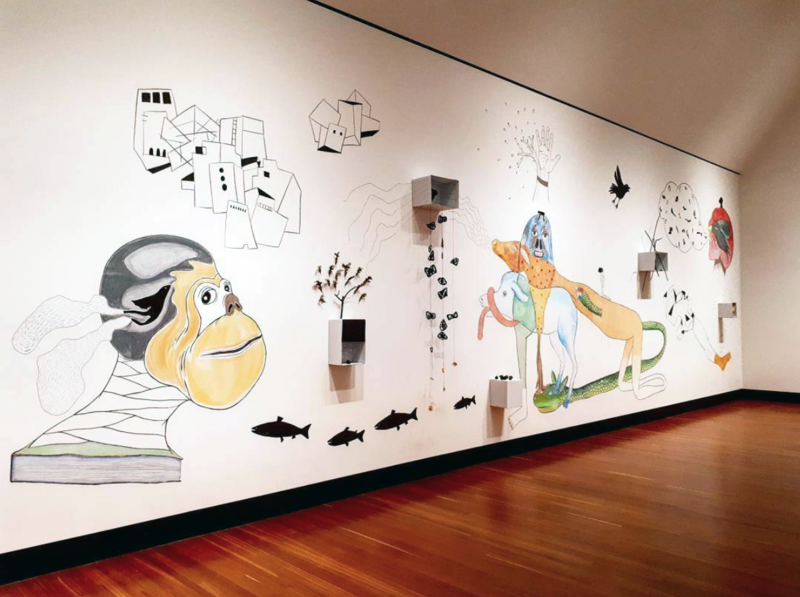 OPP: Tell us about Z’Otz Collective.

NF: Z’otz* Collective is group of artists formed in 2004 by Ilyana Martinez, Erik Jerezano and me. We all have Latin American backgrounds. I first met Ilyana in 1999 at Ontario College of Art and Design University, and I met Erik in 2001 in Toronto. We use to belong to other collectives but for the purpose of exhibiting together. We meet weekly to collaborate on multi-media works, which include drawing, painting, collage, sculpture and site-specific drawing installations.

Z’otz* is characterized by a collaborative spirit and the playfulness of our subject matter. Our quirky and often outrageous images use humor to explore ideas of transition, displacement, containment and evolution. We use multiple media to create works that denote a variety of visual elements. We implement a system of rotation, where everyone works at the same time but on different pieces. Our drawings are reigned by an intuitive drive as we spontaneously respond to each other’s marks. This allows us to exchange ideas and to observe the transformation of the work. We are interested in chance as a starting point, to establish a link between our individual subconscious. We play a game of riddles and improvisation where the only rule is that there are no rules. We have always been enamoured by characters of fables and popular tales from our heritage, that have the possibility of becoming something else and transforming into another body. Our fascination with these beings is multilayered; we often reflect upon the wonder of these transitional states. Mutation and transformation are key subject. . . a line can be a road to a fantastic universe where a snake becomes a monkey and a box a vehicle to catch dreams. Our work connotes the dynamism of the natural world and a close spiritual link to animals associated with many Indigenous Mesoamerican cultures. 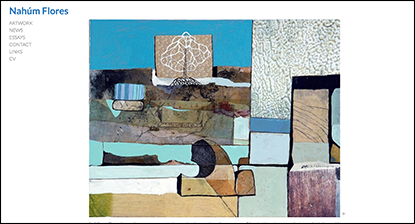 Featured Artist Interviews are conducted by Chicago-based artist Stacia Yeapanis. When she’s not writing for OPP, Stacia explores the relationship between repetition, desire and impermanence in cross-stitch embroideries, remix video, collage and impermanent installations. She is an Adjunct Assistant Professor in the Department of Fiber and Material Studies at The School of the Art Institute of Chicago, where received her MFA in 2006 Stacia was a 2011-2012 Artist-in-Residence at BOLT in Chicago. Her solo exhibitions include shows at Siena Heights University (Michigan 2013), Heaven Gallery (Chicago 2014), the Annex Gallery at Lillstreet Art Center (Chicago 2014), The Stolbun Collection (Chicago 2017) and Indianapolis Art Center (Indiana 2017). Her most recent installation Where Do We Go From Here? just closed at Robert F. DeCaprio Art Gallery (Palos Hills, Illinois). In conjunction with this improvised installation, Stacia invited eight OPP artists—Kathryn Trumbull Fimreite, Brent Fogt, Melinda Thorpe Gordon, Jaclyn Jacunski, Jenny Kendler, Meg Leary,  Geoffry Smalley and Erin Washington—to respond to the text "Where Do We Go From Here?" Each artist approached the question from a different angle, emphasizing that both the We and the Here are not the same for each of us. For Chicago Artist Coalition's annual benefit Work in Progress, Stacia will create a one-night installation that solicits the help of benefit attendees.