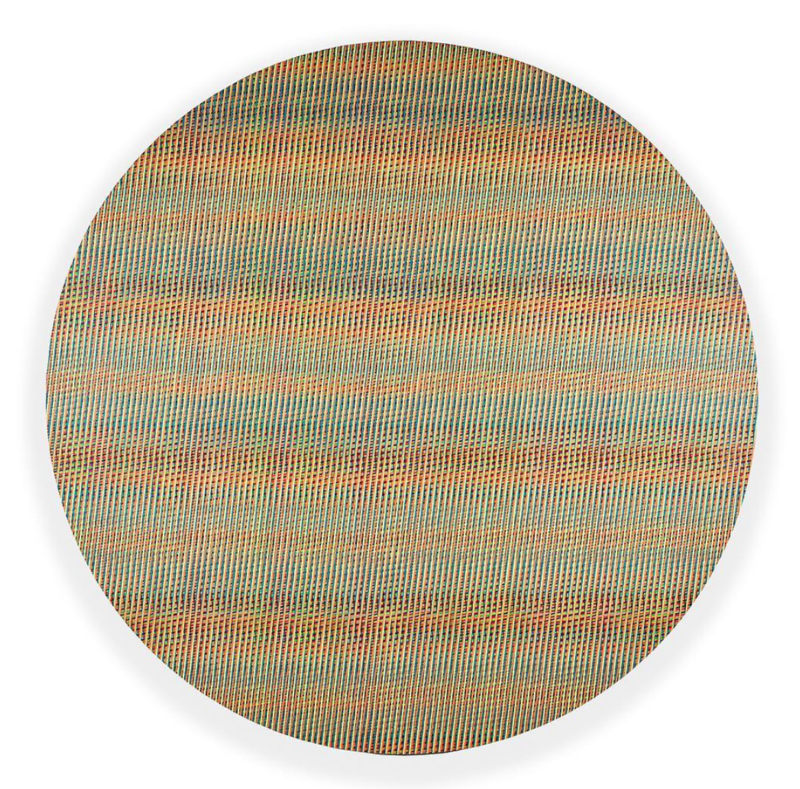 MIKEY KELLY (@mikeykellystudio) explores the spiritual undertones of abstract painting. Line is his primary mark, and his meticulous methods yield surprising, vibrating networks of color. Mikey earned his BFA at University of Oregon and his MFA at Cranbrook Academy of Art. His work is included in the permanent collections at the Cranbrook Museum of Art, the Frankl Foundation for Art and the Neiman Marcus Corporate Collection, and he has been an Artist-in-Residence at Kala Art Institute (Berkeley) and at Lucid Art Foundation (Inverness, CA). He's represented by Chandra Cerrito Contemporary(Oakland), where he has had two solo shows. His work is on view until May 20, 2018 in the Lucid Art Foundation Annual Artist Show at GRO in Point Reyes, California and in Proto_Pop at Dab Art in Ventura, California. Mikey lives and works in Napa, California, where he recently completed the Painted Poem Mural.

OtherPeoplesPixels: In your statement, you say, “The paintings truly need to be seen in person to fully experience them.” What am I missing as a viewer who’s only seen your work online?

Mikey Kelly: Changing tonalities and perspectives can’t be caught by the single image capture of a camera and need an advanced brain and the higher resolution of the human eye to truly experience these effects. When one gets closer to the paintings colors begin to separate and what you may have thought was a blue was actuality your eye mixing two or even three different colors to make that blue. There are also times when the canvases seem to bow or stretch visually as one moves around the pieces. These paintings test the viewer’s visual, neural and perceptual plasticity. 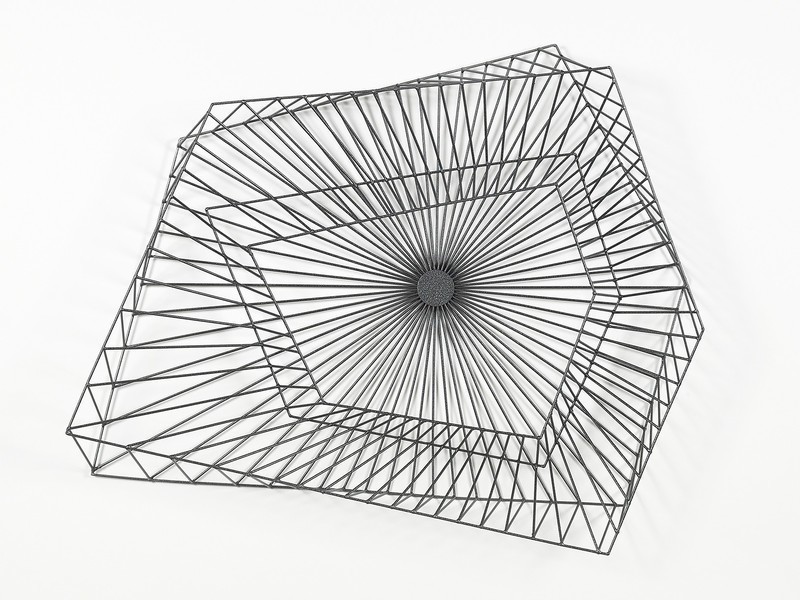 OPP: You used to work in powder-coated steel (2011-2014). I see a formal connection between your current systems-based paintings and the line variations in the steel sculpture. Are the processes at all similar despite the difference in media?

MK: All my work starts with a line. Formally they begin at the same place, but the sculpture work is much older than the drawings and paintings. The sculptures did dramatically inform the drawing and painting from their beginning, as I was familiar with playing with lines and the patterns that overlaying subsequent lines create. The process of making work changed dramatically a few years ago when I moved from the sculptural realm to the two-dimensional. 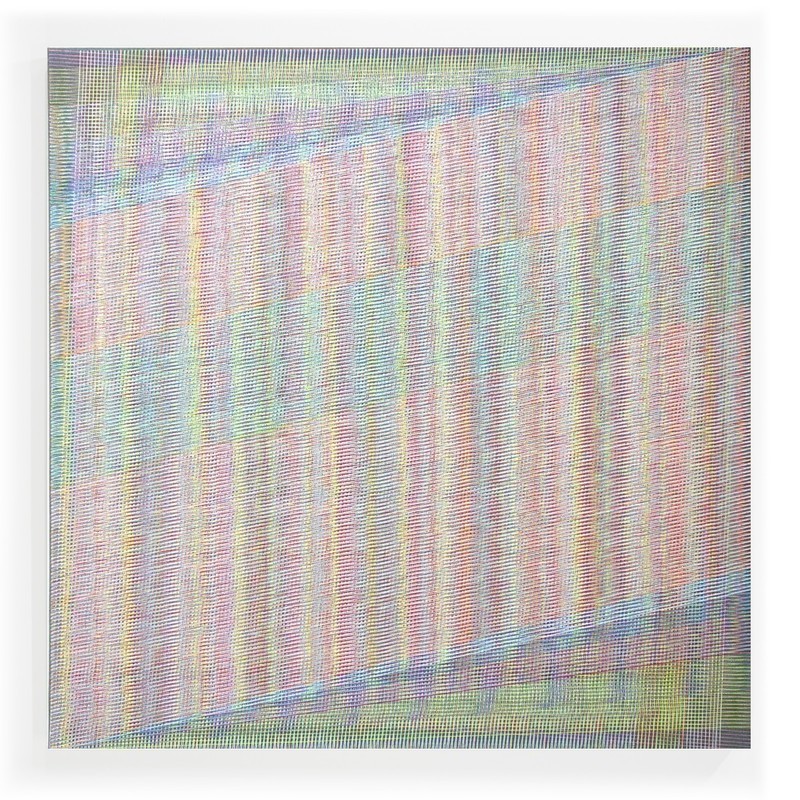 OPP: Can you describe your algorithmic process for making paintings?

MK: My process starts with an analog program using encryption methods developed for secretly passing information that can convert language into numbers. This is a generative way of designing paintings that leaves the outcome unknown. I start with a base 26 variation of a Vigenere cipher that allows me to convert language into numbers. The result is a string of numbers that I then use to calculate the angle of each series of lines. I end up with an algorithm that directs the line spacing, angle, line width and color in a predetermined sequence before I ever start painting. This means that I work with no preconceived idea of what the final piece will look like. Each series of lines results in color shifting and new interference patterns each step of the way. 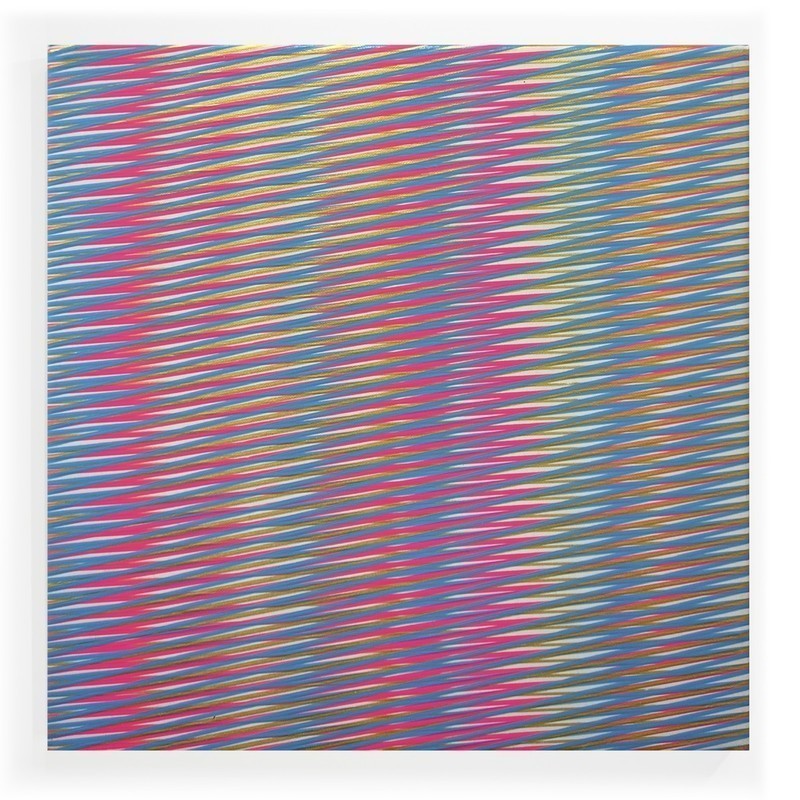 OPP: How do you get such straight lines?

MK: The painting process starts with the construction of a scale outside the boundaries of the canvas. This allows me to use a straight edge to maintain the same angle across the canvas as each line is painted. I use a pin striping tool that was developed in the early 1900s—it is essentially a syringe with a wheel at the end. This tool allows me to paint consistent straight lines of the same width without variation.

OPP: What can the paintings do that the sculptures could not? And vice versa?

MK: While both are quite formal, the paintings feel more like true expression of myself. Sculptures on the one hand allow space, distance, volume, light and shadow into play. This creates a lot of variables that a two-dimensional painting can never encompass. But the paintings have allowed me to incorporate outside interests into the design and underlying structure of the work. This is why I have been exploring ways of combining the two so I can incorporate what I love in both into one piece. 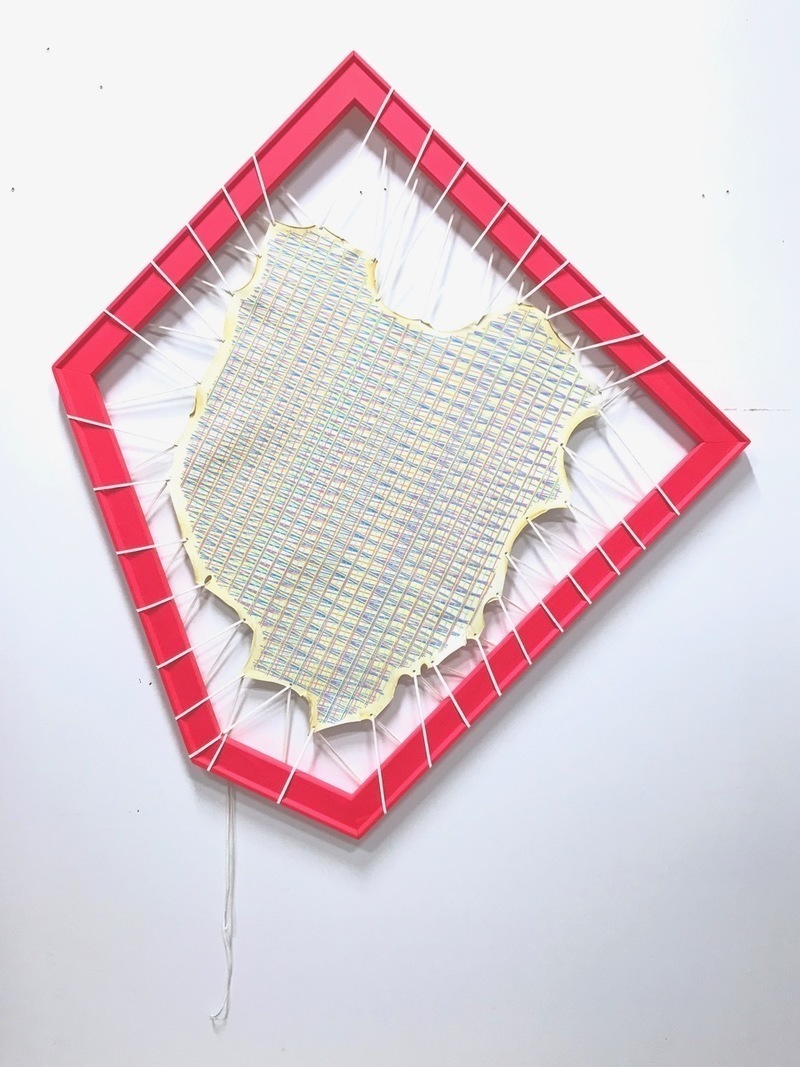 OPP: Recently, you’ve shifted away from the conventional rectangle to the circle and even stretched goat skin. What’s led you to this format change? Are these anomalies or an entirely new direction?

MK: This is definitely a new direction that the work is heading in. Working the way I do, I find that using a shape other than a square or rectangle allows for more freedom and a less confined feeling to the painting. This came about from working on a few murals and installations that I completed in the past year.

I have been working towards the goal of making more dimensional paintings that incorporate many different techniques and materials. I plan on incorporating more leather, steel and neon into my work in the near future. I find the flat surface of a painting to be confining and would like to see how warping or stretching the canvas or leather over other shapes will influence the viewing of the work. 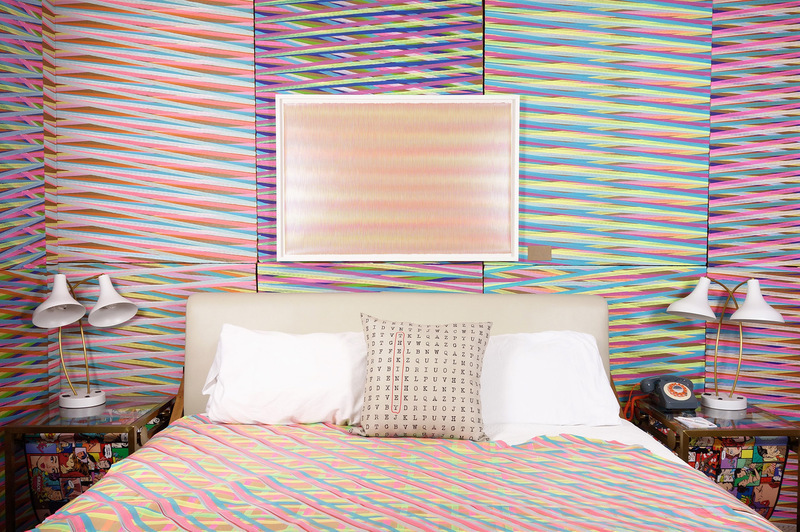 OPP: Tell us about the Happiness Project.

MK: The idea was to make an installation that felt like the positive energy that was in the paintings. The Happiness Project started while I was preparing for StARTup Art Fair LA and was trying to figure out how I could transform a hotel room into a full immersive experience. I decided the way to accomplish this would be to fill the entire room by lining every square inch of the walls with painted cardboard panels. I began by taking two word positive affirmations, running them through my analog program and then painting the resulting angles on cardboard shipping pads. Over 30 panels were cut and fit around all the furniture, light switches and outlets.

After the initial installation, I had the opportunity to install the panels again this time at Chandra Cerrito Contemporary. For this iteration I decided to further cut the panels down and to also rotate them creating more complexity to the installation as the lines now ran both vertically and horizontally and the joints became more complex and varied.

The third iteration was as a Special Project Artist at StARTup Art Fair SF.  This installation became the backdrop for their panel discussion series and broadcast on Facebook live. This most recent version included much smaller pieces while still playing with the complexity of the previous version. 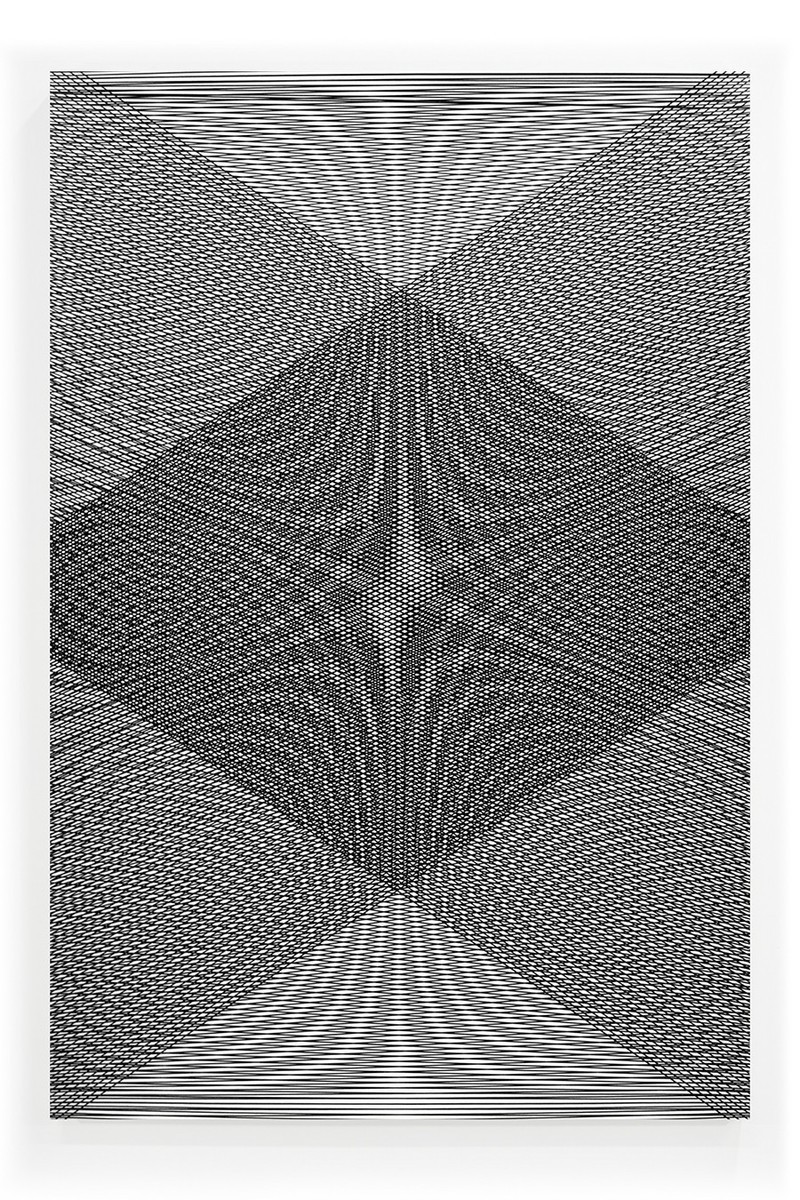 OPP: What does the phrase “spirituality hacking” mean to you?

MK: I started looking at different forms of religion and certain religious movements during a time I attended a series of events at the Rubin Museum in New York City. Most religious belief systems seem to have a short cut to attaining enlightenment or a closeness with God. Saying a certain prayer, doing a certain form of meditation or the spinning of a prayer wheel are all ways to cheating the system in a sense.

So this Idea of “spirituality hacking” became an element that I started incorporating in my work. I began by using the analog program I developed, which enabled me to take a prayer or mantra and to use it as the input. This then gave me a series of numbers that I could use as direction to paint from. This also led to incorporating rotations of the canvas during the painting process to create a painting as a representation of a spinning prayer wheel. 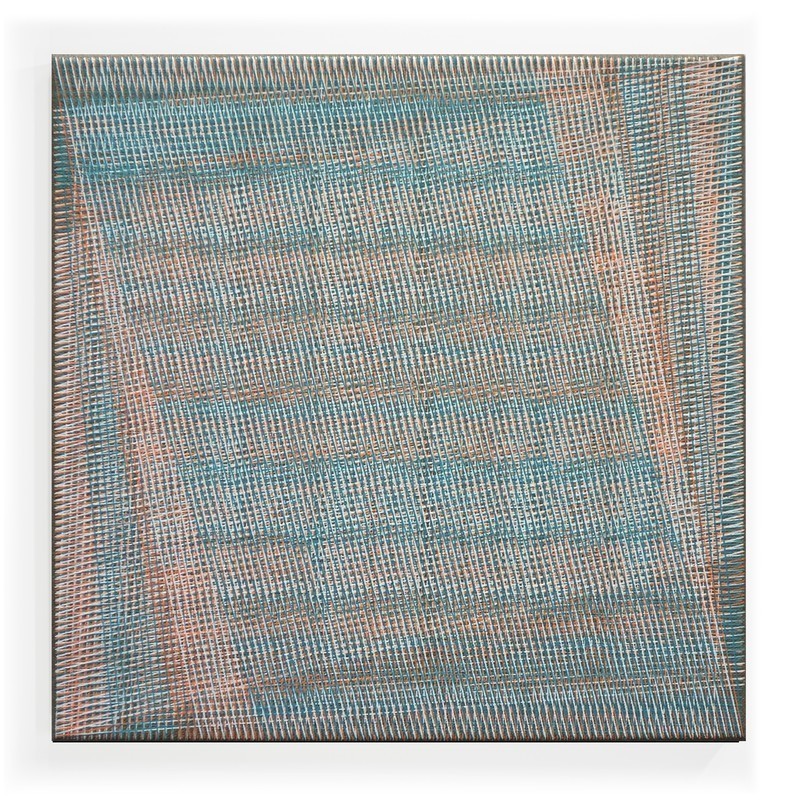 OPP: But it sounds like the precise complexity of your process isn’t really a short cut at all. Perhaps the focus and flow of the studio is the direct path to enlightenment. . .

MK:  Although there are elements of my work that have a very spiritual jump off point, I feel like the work truly needs to be viewed as an abstract piece of art first and foremost. Throughout art history spirituality has played a very specific role. When abstraction began in painting, that role did not diminish; it just went unspoken. I have chosen to be vocal about the influences of spirituality in my practice. But if I am not there or if the wall label doesn’t tell you, then the work simply becomes a painting to be judged on its formal qualities.

Many people think that making this work must be meditational. Making these paintings means making the same type of mark thousands and thousands of times. Muscle memory aside, if I just leave the present for a moment while painting, I will make a mistake. It can be very stressful and physical. I endure the struggle because the end result contains such an amazing vibratory power. I hope the work brings joy and physical beauty into the lives of others and maybe helps them find a direct path to enlightenment. 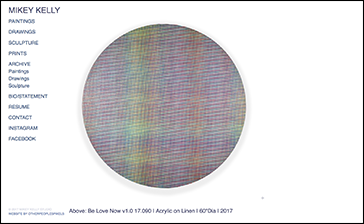