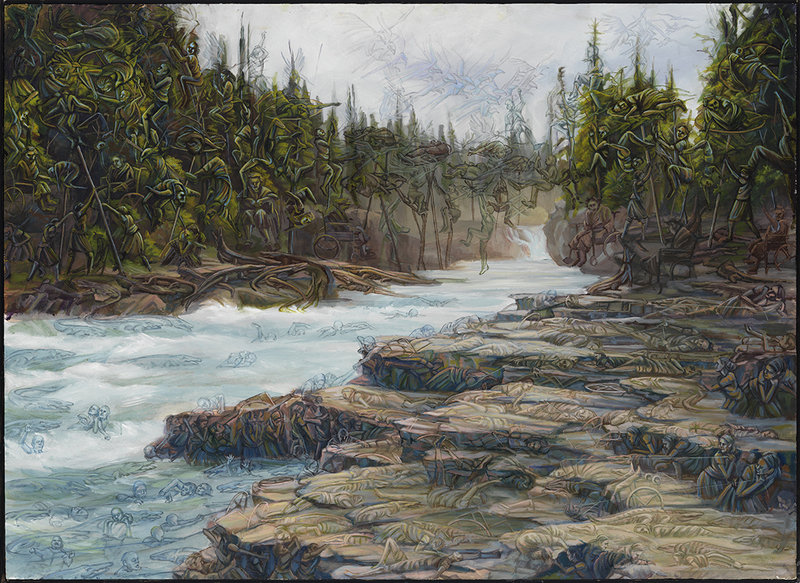 At a distance, MARY PORTERFIELD’s oil paintings appear to be traditional, romantic landscapes replete with raging rivers and waterfalls, looming mountains and gathering storm clouds. But as we move closer, we see that these landscapes are densely-populated with ghostly masses of figures in wheelchairs, dependent on oxygen tanks, supine or hoisted on the backs of others. These works are allegories of care-giving. Through accumulated and repeated visual symbols, this work explores the complex emotional and ethical experience of offering—and sometimes rescinding—aid. After completing a BS in Biology and an MS in Occupational Therapy, Mary went on to earn her MFA from Arizona State University in 2002. Solo exhibitions include shows at Great River Road Museum of Contemporary Art (2015) in Potosi, Wisconsin and the now defunct Packer-Schopf Gallery (2015 and 2011) in Chicago. Her upcoming two-person exhibition Morality Tales, also featuring Kathy Weaver, opens Feb. 24, 2017 at Firecat Projects in Chicago. You can see her work right now in group shows at Evansville Museum of Arts, History and Science (Evansville, Indiana), KSpace Contemporary (Corpus Christi, Texas), South Shore Arts (Munster, Indiana) and the Koehnline Museum of Art (Des Plaines, Illinois) through October 21, 2016. Mary lives and works in Chicago.

OtherPeoplesPixels: In works like Between Here and Elsewhere (2014) and The Foresters (2013), do the ghostly figures inhabit your landscapes or are the fields, mountains and sky built out of their ethereal bodies? Or, do they inhabit a parallel universe overlaying ours?

Mary Porterfield: In my paintings, I amass hundreds of figures to both build and inhabit my landscapes. The inspiration to do so came from an instructor who said, “A good painting tells two stories, one from a distance and one from up-close.” That single quote has had a huge impact on me and my desire to work in a dichotomous manner. I’m able to create an illusion of normality—when the paintings are viewed from a distance—by clustering the figures. The darker narratives that emerge when the viewer gets close represent the deceptive appearance of situations and what is outwardly hidden. So often in life, all is not what it seems. I hope to address this by conveying two sensibilities within my work. 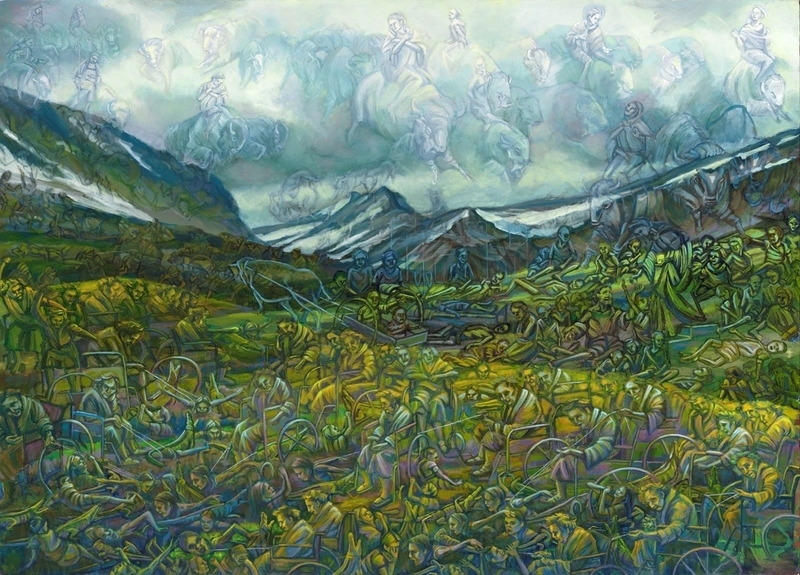 OPP: How does your training as an occupational therapist influence the work you make?

MP: When I began working as a therapist over 20 years ago, I always thought it was best to give unconditionally and ceaselessly, even in the direst of circumstances. While I still feel these are exemplary traits, I’ve come to question my initial belief. I’ve seen many caregivers make numerous sacrifices in the midst of futile situations. I’m especially moved when these individuals risk their own physical or emotional health to provide years of assistance. This becomes harder to witness if their efforts are met with indifference or anger.

I’ve always struggled to accept what I cannot change. My landscapes symbolize those situations in healthcare that are literally and figuratively beyond my control. The figures who use wheelchairs or assistive devices represent those patients who faced terminal prognoses or degenerative diseases, which therapy could not affect. The uncertainty of their outcome is represented by animals, who serve as metaphors for strength and danger. Caregivers are represented by young women who risk their own safety to pull or hoist the disabled to safety. These women face the dangers of powerful animals and destructive elements from nature. The caregivers’ efforts are questioned as some of the patients remain immobile while others are brought to a place of isolation or greater peril. Would it have been better if the caregivers accepted what they could not change? Through these works, I advocate for a balance of giving and receiving, especially when assisting others. 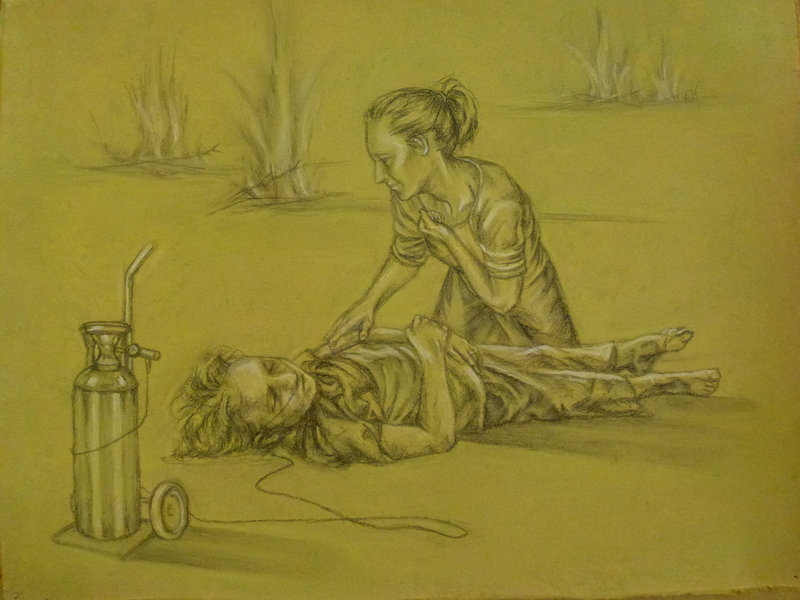 OPP: Can you talk about the difference between the drawings of solitary pairs or small groups floating on colored backgrounds and the same narratives amidst the masses in the landscapes?

MP: Some of the solitary pairs include caregivers who chose to resign themselves to the risks at hand by turning away from the person in need. Other pairs include patients who accepted assistance from another in the midst of uncontrollable circumstances. The many narratives are purposefully repeated to symbolize the universal struggle to find balance when caring for others.

The small groups floating on the colored backgrounds differ in each painting, pending the scene which surrounds them. In The Foresters, ghostly figures are seen saving those from drowning in the raging river. The shoreline on the right is comprised of those who have been rescued and those who collapsed while attempting to help. On land, other dangers await these individuals as they remain trapped in the surface while surrounded by crocodiles. In Pool of Life, the figures floating in the sky attempt to hoist or pull souls from falling in the water below and the geyser that erupts from it. Some of the figures chose not to accept aide while others still fell despite the rescuer’s efforts. In Fields of Departure, the floating figures include saints who rest on charging buffalo, emerging from the sky. This was in response to stories I had read of herds of buffalo that fell off cliffs when their stampede became unstoppable. This imagery became a compelling metaphor for a powerful and unwavering belief system. Having been raised in a religious household, these beliefs include the desire to give selflessly and unconditionally, even when faced with the impossible. Letting go of these convictions is difficult for me and is a large impetus for my paintings. 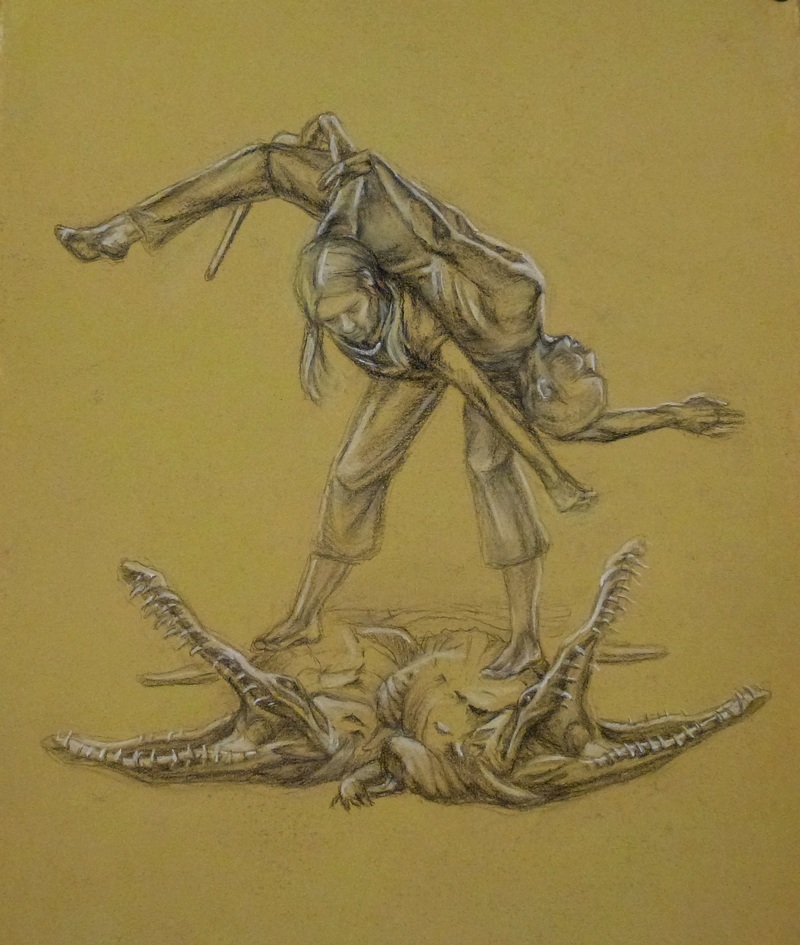 OPP: Do you consider your drawings works in their own right or are these studies for figures to be included in paintings?

MP: The drawings began as studies for my paintings but recently became images in their own right. The shift began when I was offered a show at Firecat Projects in February of 2017. To prepare for this show, I’ve emphasized drawing as my artistic practice for the last year and a half. Doing so has been an incredibly positive experience. I’m able to bring attention to individual struggles and responses to the uncontrollable. For example, in Balancing Act, a young woman is seen supporting an amputee while delicately standing on crocodiles. Her life is put in jeopardy to provide support to the person in need. If she becomes fatigued or is no longer able to carry the weight she holds, they both will fall. In The Remaining, a female figure tenderly reaches towards an unconscious child. Yet, the child is reliant on an oxygen tank as multiple fires burn close-by. With an explosion looming, the female’s decision to stay poses great risk to her safety. Yet, her resolution to remain is seen in her compassionate expression. Drawing allows me to show such details as the careful positioning of her hand and the vacant look of the child. I’m excited to bring this type of specificity to my new paintings that are based upon aerial views from my recent trip to Alaska. 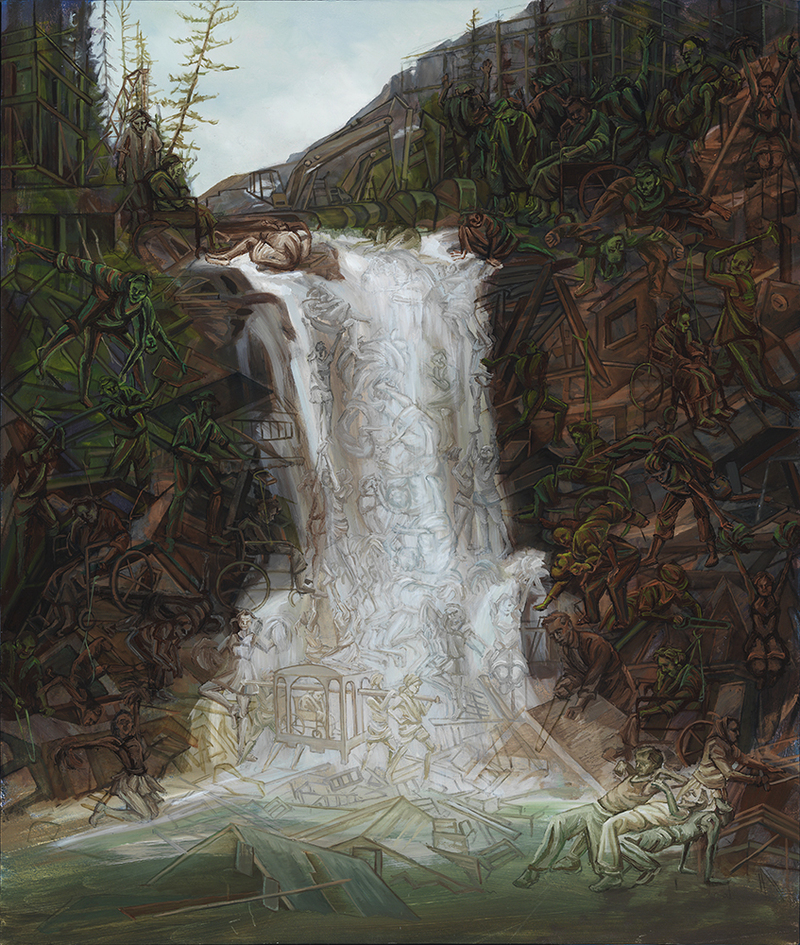 OPP: Occasionally, but not in every piece, I see a solid figure: at the top of the waterfall in Falls of Reliance or on a platform by the raging sea in Pool of Life.  What’s the relationship between these singular, solid figures and the masses of ghostly ones?

MP: In Falls of Reliance that singular figure represents those patients who refuse aide, even when assistance is warranted. Something I struggle with in healthcare is when to discontinue therapeutic intervention if it is needed but not wanted. The figure on the platform in Pool of Life signifies those patients I attempted to assist but could not affect due to the magnitude of the injury. That figure, holding a cane and facing the viewer, is one whom I wish I could approach and express my regret.

The juxtaposition of volumetric, solid forms and ghostly imagery began as a desire to create more surface variation in my paintings.  As I began to broaden my technique, the masses came to represent the universal struggle to care for others in a compassionate manner. The repetition of their placement symbolizes the interconnectedness amongst caregivers, who face similar hardships while providing a continuum of care. The ghostly figures, often outlined and transparent, react to the landscape to save others from harm.  Their phantom-like appearance allows them to separate from the many solid elements of nature. Whether the ghostly figures are suspended in the sky or floating in water, they attempt to protect others from natural forces such as waterfalls, raging rivers or storm clouds. In these situations, nature often triumphs, representing the power of the uncontrollable. 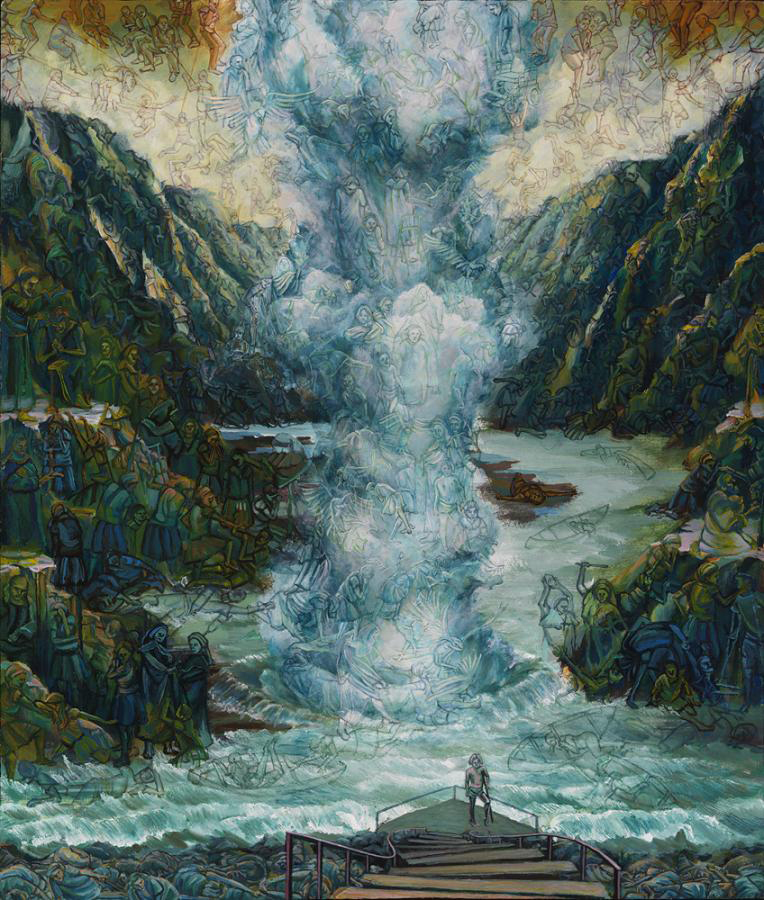 OPP: You ask the question in your statement: Is it better to deny futility or accept what cannot be changed? You tell me.

MP: Unfortunately, I still don’t know the answer. But, the lack of knowing inspires new narratives that inspire other questions, including:  Is it better to be selfless or self-seeking? If is assistance is warranted but not wanted, should it be abandoned? Why is longevity given to some who are indifferent but denied others who desire a long life? The continual search for answers triggers the desire to make new work. 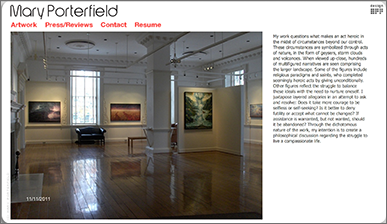 Featured Artist Interviews are conducted by Chicago-based artist Stacia Yeapanis. When she’s not writing for OPP, Stacia explores the relationship between repetition, desire and impermanence in cross-stitch embroideries, remix video, collage and impermanent installations. She is an Adjunct Assistant Professor in the Department of Fiber and Material Studies at The School of the Art Institute of Chicago, where received her MFA in 2006, and was a 2011-2012 Artist-in-Residence at BOLT in Chicago. Her solo exhibitions include I Still Haven’t Found What I’m Looking For (2013) at Klemm Gallery, Siena Heights University (Adrian, Michigan), Everything You Need is Already Here (2014) at Heaven Gallery (Chicago) and When Things Fall Apart, in the Annex Gallery at Lillstreet Art Center (Chicago). Stacia created site-responsive installations for two-person show Form Unbound (2015) at Dominican University's O’Connor Art Gallery (River Forest, IL) and SENTIENCE (2016) at The Ukrainian Institute of Modern Art. Her work was recently included in SHOWROOM, curated by Edra Soto, at the Chicago Artists’ Coalition. Stacia is currently preparing for a two-person show with Brent Fogt at Riverside Art Center (Riverside, Illinois) and a solo show at Indianapolis Arts Center in Indiana.