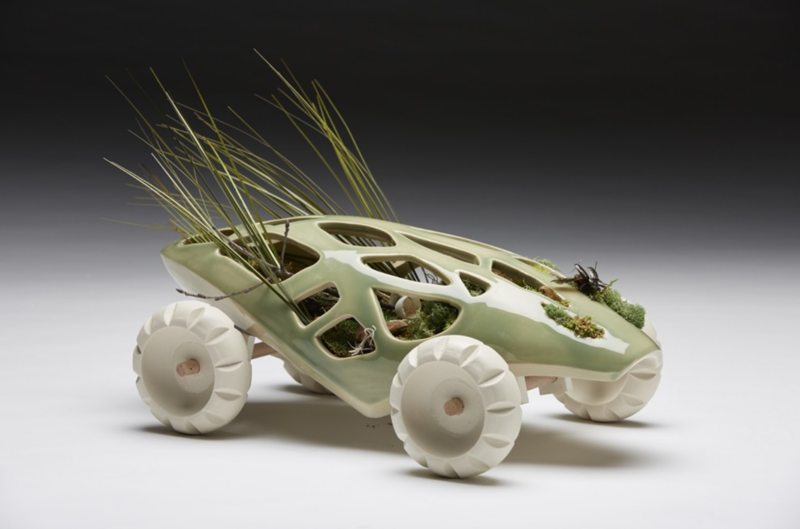 MARNIA JOHNSTON combines a very old technology—ceramics—with new technology—electronics and robotics—in interactive works that tend to exist outside the white cube. Her TE+ND Rovers and TENDr Pods roam through the landscape, engaging bystanders to help them find light and water in exchange for education about native and non-native plants in the area. Marnia earned her BFA from San Jose State University (2007) and her MFA from the California College of the Arts (2007). She has been an Artist-in-Residence at John Michael Kohler Center for the Arts (2016), Kala Arts Institute (2015), Anderson Ranch (2014). Her numerous exhibitions include shows at Paragon Gallery (2017) in Portland, OR, Portand Museum of Contemporary Craft (2016), Richmond Center for the Arts (2015) in Richmond, CA and The American Museum of Ceramic Art (2015) in Pomona, CA. Most recently, Marnia participated in a Disaster and Climate Risk Artathon over the summer with Stanford doctoral students to create artworks that illustrate ecological resiliency. The results from that event will be shown at the Stanford Blume Earthquake Engineering Center from October 4 - December 1, 2017. Marnia lives and works in Concord, California.

OtherPeoplesPixels: Can you talk generally about how you use technology in your work as an artist?

Marnia Johnston: I think that people forget what technology is. It’s the zipper on your jacket, your shoelaces (or Velcro/elastic for those of us who like slip-on shoes), a fishing net, very basic stuff that we no longer consider technology because it’s so ubiquitous. When we talk about technology today, we neglect our history, our long culture, our techne. That’s why I like to use ceramic techniques, some of the oldest surviving technologies we have, and mix them with rapid prototyping techniques, motors, Raspberry Pi, and various sensors.

I’m not an engineer, but for the TE+ND rovers I had to learn the iterative engineering design process. This meant learning how to design robot parts using a variety of CAD programs, learning CAM programs that transform my models into gcode and then learn how to use 3D printers, CNC mills and water jet cutters. It’s been a long process. 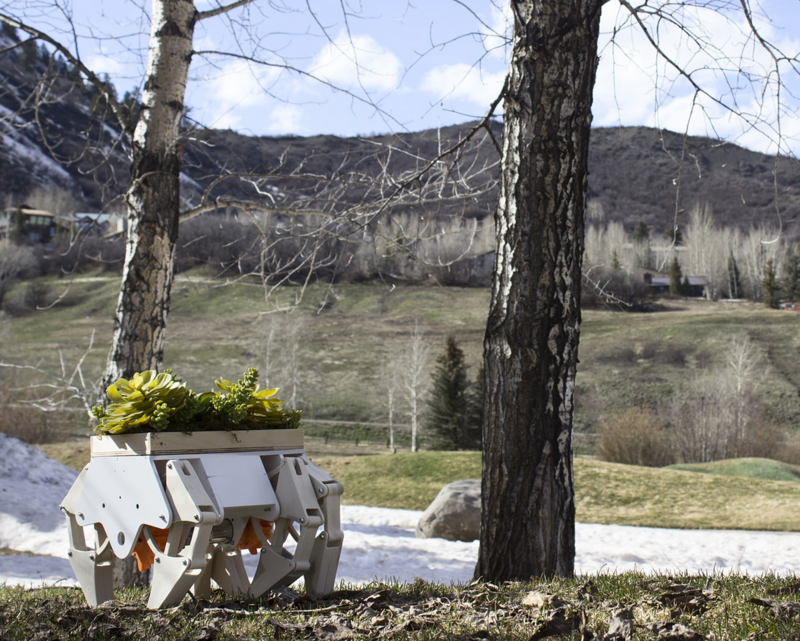 OPP: You mentioned the TE+ND rovers. “The rovers are robotic fostering environments that care for their own garden of native plants by interacting with participants and actively seeking out light and water.” How do they tend their own gardens? Where do they rove?

MJ: TE+ND Rovers, designed after space exploration vehicles, are intended to investigate a range of environments, from cityscapes to less urban locales. Locations for deployments have included Mt. Diablo, Joshua Tree, and Briones Park (all in California) and the Kohler factory in Wisconsin.

I refer to the audience as participants for this project. The participants are encouraged to assist the rovers by watering their plants and herding them (using their obstacle avoidance systems) toward the resources they need—light and water— to keep their garden healthy. In the future, rovers will use an optical sensor to locate water. In an urban setting, rovers will find water in sprinkler systems, drip irrigation, rain, fog, and from participants. In helping the rovers, participants learn about cultivating native California habitat and stretch the limits of human-robotic empathy and engagement.

OPP: Do you monitor them or just release them? How do other humans encounter the rovers?

MJ: The rovers are currently monitored during deployments. I would like to just let them roam but there are obvious complications to that. For example, how to inform participants of the project efficiently when a monitor is not present or how to keep people from just taking them home. The rovers are usually deployed along popular hiking routes and participants encounter them without previous knowledge of the project. TE+ND monitors are on hand to answer questions and to initiate dialog about what participants consider “native.” 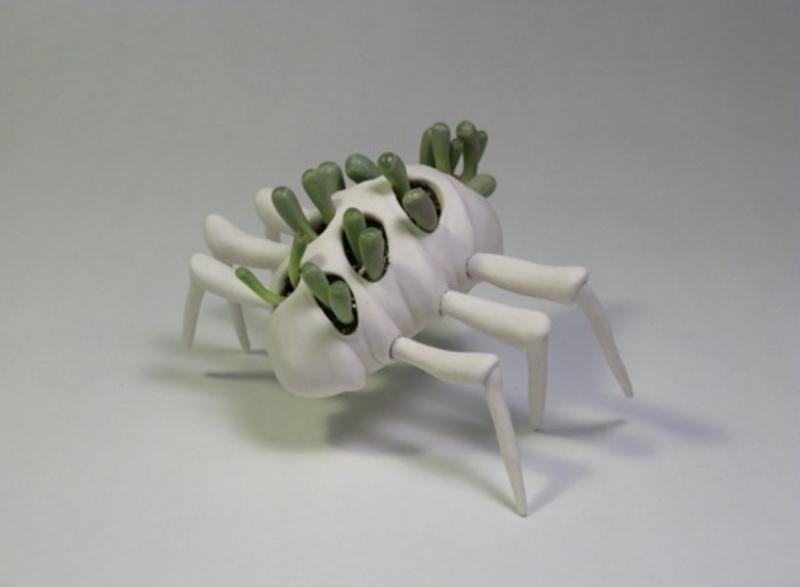 OPP: What kinds of assumptions do participants make about the plants surrounding them? What do you hope participants will understand about “native” plants?

MJ: From my experiences, most participants don’t really have an opinion until they remember that the Eucalyptus trees they see are from Australia or that most of the grasses underfoot are brown during the summer because the majority of them come from Europe. The non-native grasses grow so quickly that they’ve crowded out the native grasses, making it hard for native grasses to compete. I’d hope that the experience leads participants to understand that when they try to go for a hike to get back to ‘nature,’ what they are experiencing is managed landscape; that their opinions and actions help shape that landscape. I hope their experience with the project enables participants to make conscious decisions about local habitat that will benefit future human and nonhuman populations. 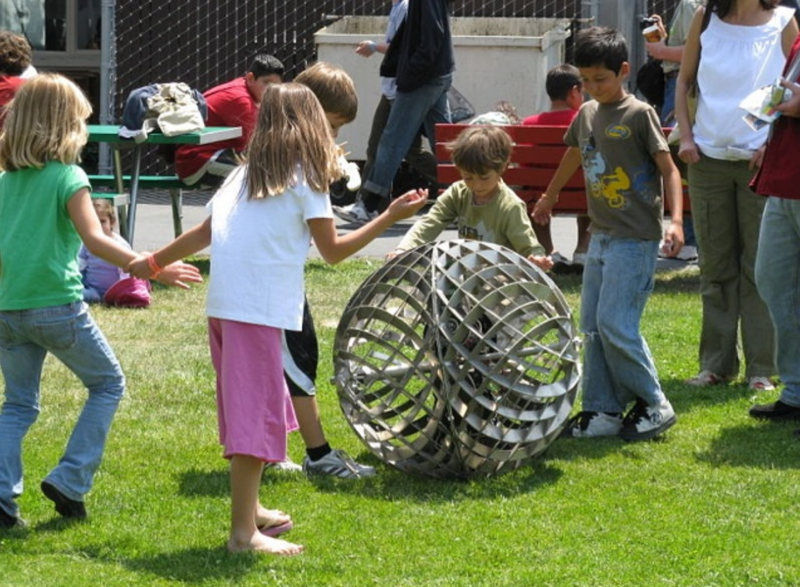 OPP: SWARM is another robotic project that you’ve been involved with since 2007. What is your role in this collaboration?

MJ: SWARM was the brain child of Michael Prados and is funded by the Black Rock Foundation. Many people have contributed to its design, construction and presentation. In the beginning, we needed lots of volunteers with specific skill sets to help with R&D. We needed every type of labor, from building electronics to designing control interfaces. I helped to weld the aluminum shells, helped design a performance laser perimeter, presented the project to the public, among other things. In 2010 we were lucky enough to be invited to India to perform and give a presentation to students at the Indian Institute of Technology. I’ve also helped perform at Coachella, the California Academy of Sciences in San Francisco, at NASA Ames, and in New Orleans as part of the Multispecies Salon. I’ve been involved with the project for 10 years now. 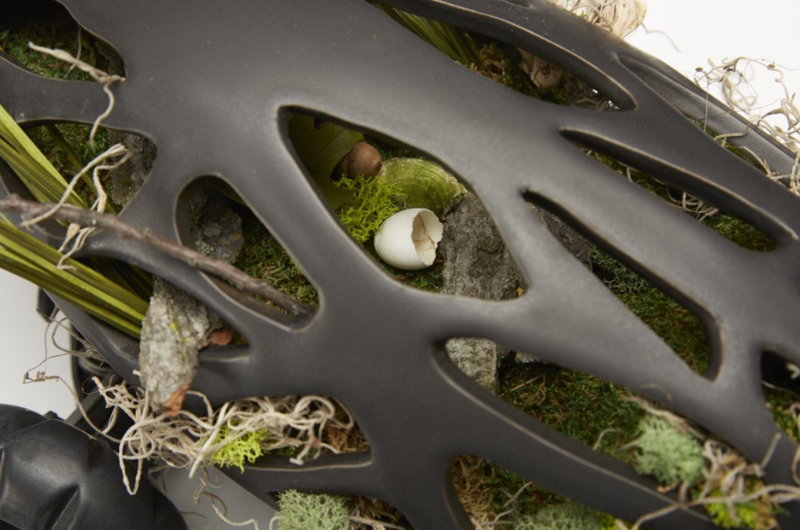 OPP: Tell us about DIYbio and how it impacted your current practice.

MJ: DIYbio was established to create a vibrant, productive and safe community for people who wanted to work on their own biology projects. Projects range from creating cheaper equipment that could be used more efficiently and effectively in the field, to synthetic biologists working in community labs to develop medicines (the Open Insulin project), food (Real Vegan Cheese), and renewable energy (biofuels).

I’m currently looking at cultivating oyster mushrooms and how they can be used for soil remediation as part of an art project. The Bay Area, where I live, had an important ship-building industry in World War II. There were over 30 shipyards, and their supporting industries covered the bay shore and estuaries. This industry, along with the use of lead paint, contaminated the local soil with lead. I’ve been going to Counter Culture Labs, a wonderful community lab in Oakland, where Bay Area Applied Mycology (BAAM) meets and has begun the soil remediation project. It’s a valuable resource and the Bay Area is lucky to have such an amazing and giving group of DIY biologists. 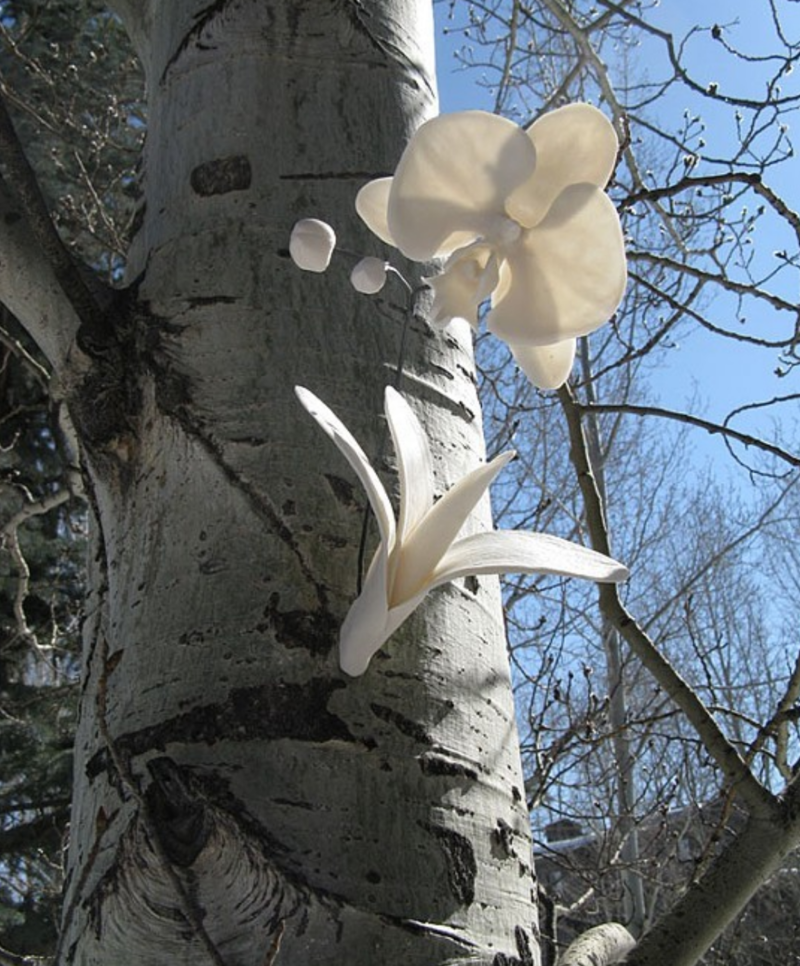 OPP: Most of your work seems to make more sense outside the white cube. Can you talk about the role the site plays in your projects?

MJ: Unfortunately, because the projects are so conceptually tied to the site, they can be difficult to present in a gallery. For example, many of the native plants on the TE+ND rover growing platform can’t tolerate being inside where they dry out or don’t have the correct light level to flourish. It also just doesn’t have the same impact. Rolling along the California hills, you have a little rover laboring over vast, sometimes difficult landscapes. The rover’s size is diminished in this environment, compared to being situated in a white room.

It’s also encouraging to interact with people who are not prepared for art, as they usually are in a gallery. I get a wholly genuine response when people interact with my projects outside. Besides, who doesn’t like going for a hike? 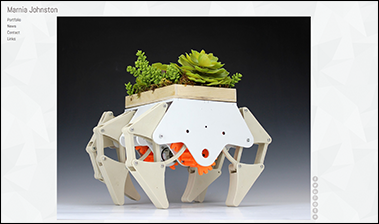 Featured Artist Interviews are conducted by Chicago-based artist Stacia Yeapanis. When she’s not writing for OPP, Stacia explores the relationship between repetition, desire and impermanence in cross-stitch embroideries, remix video, collage and impermanent installations. She is an Adjunct Assistant Professor in the Department of Fiber and Material Studies at The School of the Art Institute of Chicago, where received her MFA in 2006 Stacia was a 2011-2012 Artist-in-Residence at BOLT in Chicago. Her solo exhibitions include shows at Siena Heights University (Michigan 2013), Heaven Gallery (Chicago 2014), the Annex Gallery at Lillstreet Art Center (Chicago 2014), The Stolbun Collection (Chicago 2017) and Indianapolis Art Center (Indiana 2017). In March 2018, her solo installation Where Do We Go From Here? will open at Robert F. DeCaprio Art Gallery (Palos Hills, Illinois). In conjunction, the atrium will exhibit two-dimensional artwork by Chicago-based artists who were invited by Stacia to make new work also titled Where Do We Go From Here?