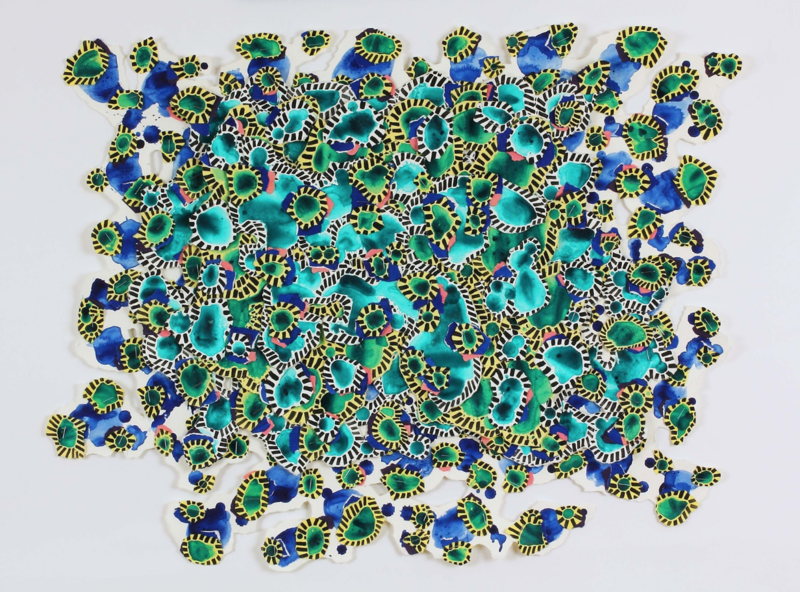 LUIS ROMERO's dimensional, layered works confuse and capture the eye with overlapping, repeated marks. Somewhere between sculpture and collage, these accumulations of hand-drawn, layered canvas, paper and cardboard are often held together by staples, merging pure abstraction with mundane materials that keep the viewer grounded in the real world. Luis earned his Post Baccalaureate Certificate and MFA at The School of the Art Institute of Chicago. Recent exhibitions include solo show Who Says Words with My Mouth? Who Looks Out with My Eyes? (2018) at Adams and Ollman Gallery (Portland, OR) and Between Land and Sky (2019), curated by Nazafarin Lotfi, at Everybody Gallery (Chicago). In March, Luis's solo show at Museo de las Américas (San Juan, Puerto Rico) was put on hold due to the pandemic. Echolalia is now open and on view through January 23, 2021. You can see a video walkthrough of the exhibition here. Luis lives and works in Chicago, IL.

OtherPeoplesPixels: How do found materials show up in your work. In other words, tell us about the surfaces you are drawn to make marks on and the materials you use to make marks.

Luis Romero: In grad school I began covering found objects with marks all over. The idea was to envelop the object. I was using mostly pens and sharpies on things like brown paper bags and organic objects like leaves, branches, stones. In Home/Hypnosis (1999), I first started exploring a sort of camouflage effect on found objects within a limited palette of whites and grays. At a period when I felt the need to open up what I was doing, I started working with materials found in the street. This time it was the material rather than the object that interested me. I started constructing little fetish-like objects made of materials found around my neighborhood and downtown. I wanted the raw textures and the colors. (No organic materials this time.) It was easier for me to experiment with colors if I found them already existing in objects. Some have pen, others acrylic marks, but I used marks sparingly. The result, or one of the results of that period was the work Selected Fetish Drawings which I exhibited at the Drawing Center. Somebody asked me around that time if I was thinking of Schwitters when I did this, but actually it had more to do with the exercises that Josef Albers made Rauschenberg do when he was his teacher. (Off The Wall by Calvin Tomkins was very important for me. I think I did my first experiments with found objects around the time I read that work in Puerto Rico well before going to grad school.) Since then I’ve used found materials sparingly. Mutant Map of the United States for example, has some found trash from the street. I wanted it to have echoes from that fetish period. 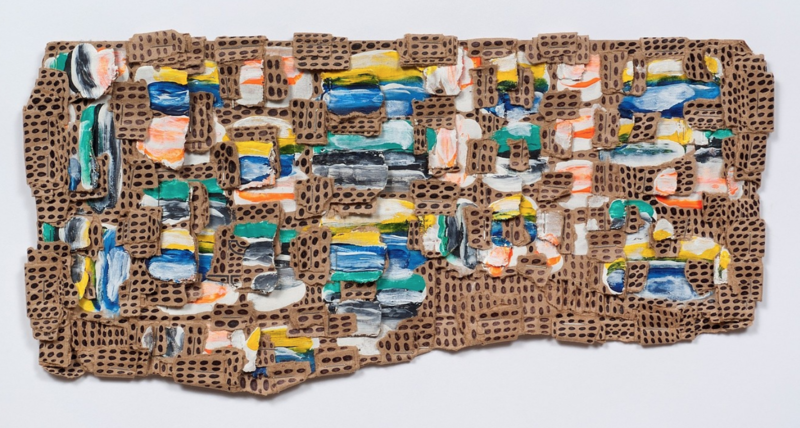 OPP: What about cardboard specifically? Why is this a surface you return to again and again?

LR: The cardboard that I use nowadays is mostly found but that’s not what attracts me. I mean, I could very well work with cardboard that I’ve bought. What attracts me to cardboard is the warmth and the roughness, and that, like paper, the material also exists outside of the realm of art. The fact that the material is colloquial, is connected to everyday life, is more important to me. It is in fact very important for all I do. 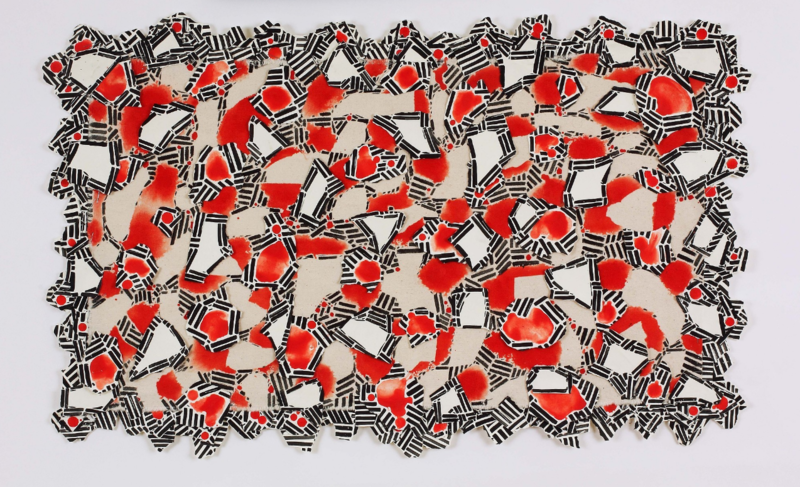 OPP:You were a 2010 3Arts Award recipient. In your intro video, you said, “My drawings are a surface, but they also want to suggest something that you cannot see.” What is the something we cannot see, for you? 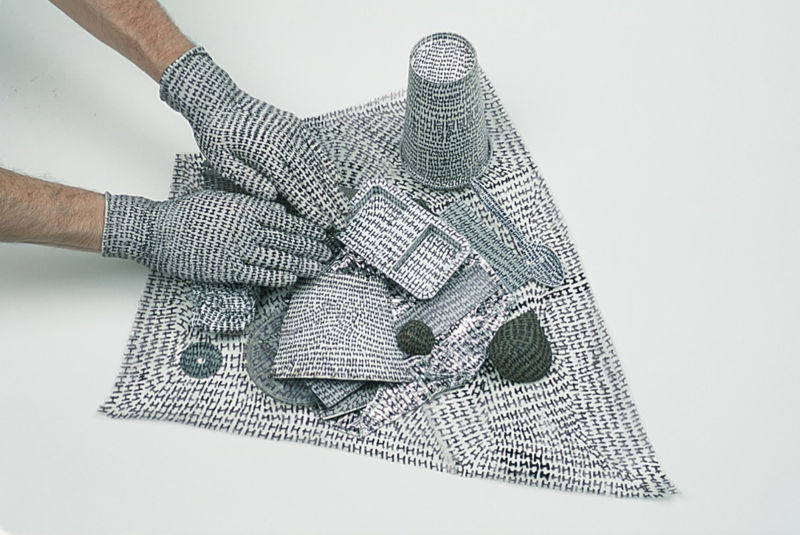 OPP: What role does optical illusion play in our work?

LR: It’s a very useful tool. I’m referring specifically to the illusion or the visual confusion created by camouflage. When the mark is not contained within margins of a page but goes around it and seems to exist beyond the material, the objects with the same patterns blend. They loose individuality. They become less substantial. The mark is overpowers the object. The insight really goes back to that Home/Hypnosis work. But I do it now in different ways. Different surfaces can blend if they have similar patterns. In my studio I move things around just to make more space to work and often find random connections. Many pieces have started that way. Surfaces with similar patterns find each other by chance. They attach themselves visually. It's very weird. Very organic. 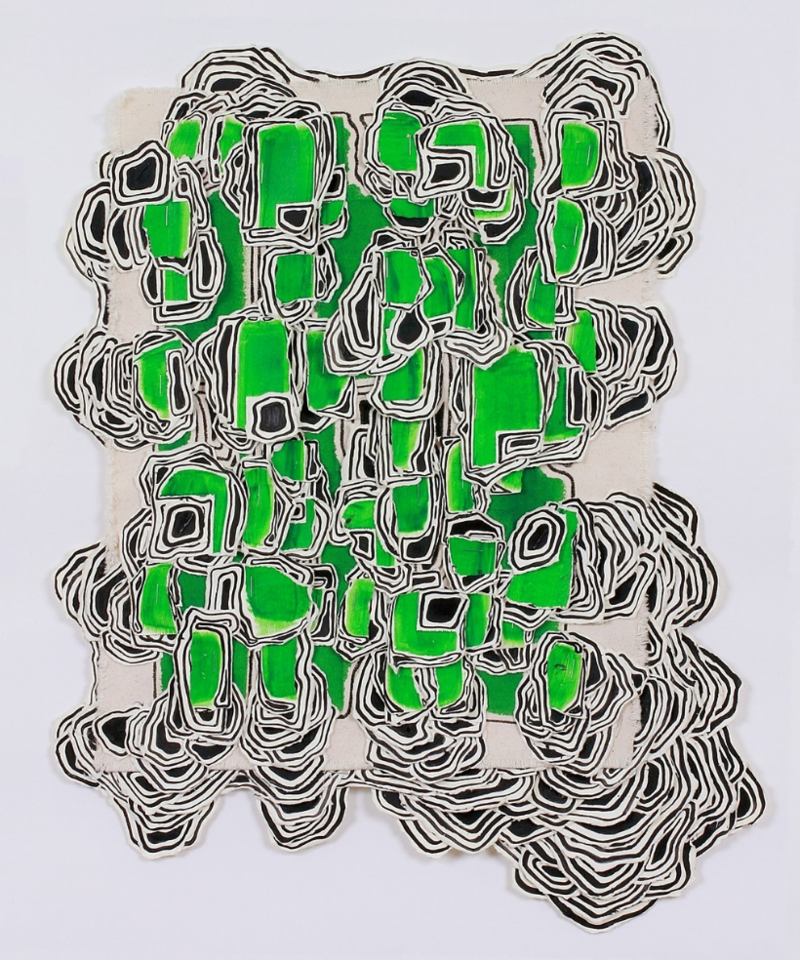 OPP: Do you think about abstraction as pure color, form, line and material? Or are these and the processes you use metaphors?

LR: I rarely know what the project is going to be about. I always think of my task as finding the organizing principle for each piece, the “as if.” Finding it is something that happens while working; in the act, not a priori. Often the processes I use carry echoes of other activities.

Some works have begun just because I want to see two particular colors together, or because a particular shape is interesting, without considering what it could mean or what it suggests. There have been cases where I use the same color scheme of a previous work because I’m trying to explore the way the work is constructed and don’t want to be too concerned with harmonizing colors. Sometimes I just happen to have left over pieces from a previous work. But all those elements (color, form, line and material) do carry associations that I eventually use in creating a work. I don’t think they could be “purified” from these associations. They are multiple, and fluid but they are central to the work. Using those associations is part of the fun. 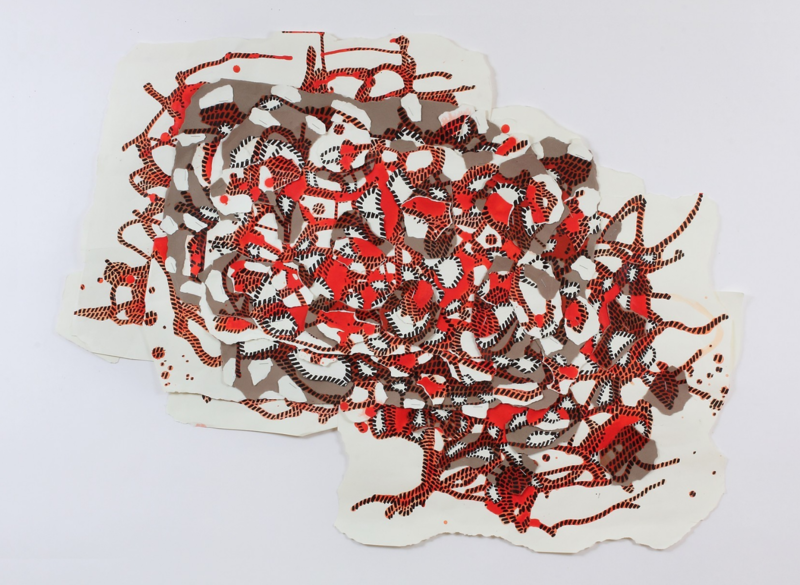 LR: Those works are very recent, and I speak somewhat tentatively because I’m still trying to understand them and what they can do. I guess I’d say that for a few years now I have been trying to create a kind of visual ambivalence in my drawings using layers and mark repetition. I use layers and camouflage to create confusion between the foreground and background.

In-progress work in the studio

OPP: How are they both drawing and sculpture?

LR: With these new paper constructions I’m trying to use that visual ambivalence in space, not just on the wall. As with my 2D work, the eye blends the repetitive patterns, but they occur in separate pieces that stand separately and that occupy a space. In some of my experiments the constructions expand, in others they are closer. These days I’m figuring out how to use density. I am also trying to see how to use color. Some of the results have been very site specific. Artists like Jesus Rafael Soto and other Latin American Op Artists have been on my mind. Also Helio Oiticica and even Paul Klee and  Mondrian, who if I recall correctly was doing installations in his studio late in his career.

It’s amusing because I arrived to these works in a way that was somewhat different for me. Kind of hard to explain but there was a little bit more deliberation than usual. I tried these constructions for all sorts of reasons that were not related to what I was doing at the moment. The change felt a bit abrupt in relation to the piece I was working on. As I have been writing this response I am realizing how related in fact these pieces are to my previous works. My paintings have been slowing becoming installations over the last year. With a piece like Landscape Showing Butt, I started to place small sections that were detached from the main area. My Own Private Summer Something is really something like an installation. There was a progression that I hadn’t noticed. In terms of my deliberations, well it turns out I wasn’t doing what I thought I was doing. That’s why a couple of years ago I titled a show “Who Says Words with My Mouth? Who Looks Out with My Eyes?” Art making sometimes feels that way. 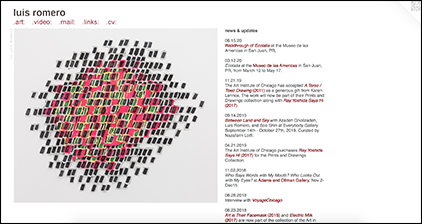 To see more of Luis' work, please visit www.romeroluis.com and check out his Instagram @total_romero.