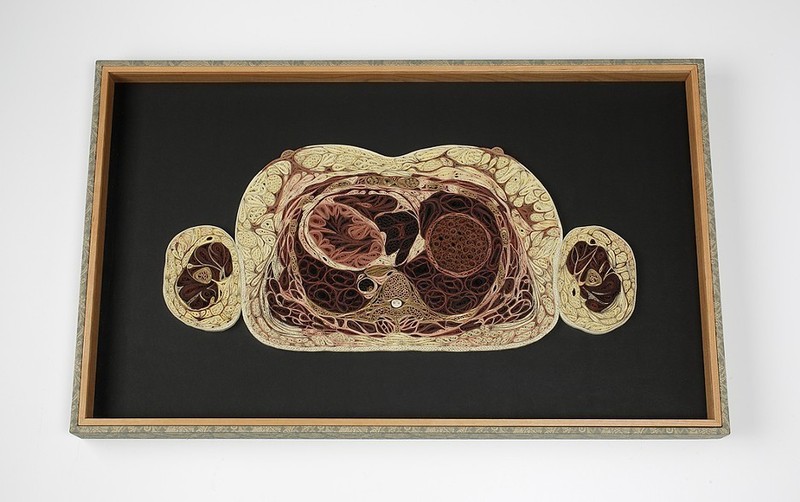 Detached investigation and emotional reverence collide in LISA NILSSON's beautiful, paper sculptures based on cross-sections of human—and sometimes animal—anatomy. She uses the meticulous technique known as quilling or paper filigree, which has historical roots in the Renaissance, when monks and nuns used it to decorate religious icons and reliquaries, and the Victorian Era, when the technique was popularized as a decorative craft practiced by ladies of leisure. Housed in shadowboxes, her sculptures refer to both religious relics and scientific specimens, highlighting the human need to understand our place in the world, whether through rationality or direct experience. Lisa received her BFA from Rhode Island School of Design (1985). She has had solo exhibitions at Wilson Wilde Gallery at Williams College (2008) the Lavender Door Gallery in Stockbridge, Massachusetts (2011) and Pavel Zoubok Gallery in New York, where she is represented. Lisa lives in North Adams, Massachusetts.

OtherPeoplesPixels: When did you learn the technique known as quilling or paper filigree? Did you pick it specifically for your current project on human anatomy or did you practice the technique before beginning this project?

Lisa Nilsson: I started experimenting with quilling after being inspired by an antique, quilled crucifix I saw in a junk shop. I first used it as an element in the box-assemblages I was making. At the time, quilling was just another technique to include in these tiny curiosity cabinets. 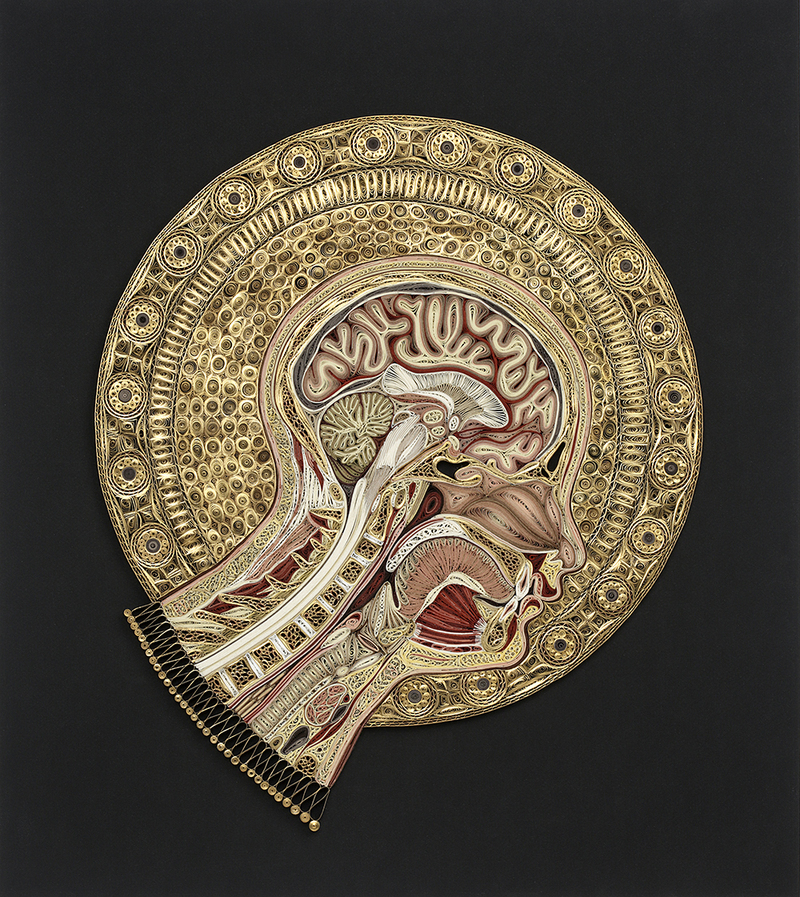 OPP: Could you talk about the historical associations of this technique as they relate to your anatomical studies?

LN: In doing a bit of research about quilling, I encountered a collection of 18th and 19th century French quilled reliquaries. They employ a great deal of decorative filigree made with gilded-edged paper and velvet backgrounds. I started using gilded paper in my anatomical work, in part, because it looks cool, but also to reference the precious and the divine. The device I used was to make the bones of my anatomical pieces with gilded paper. And later in Angelico (2012), the section of the head is surrounded by a large gold halo. 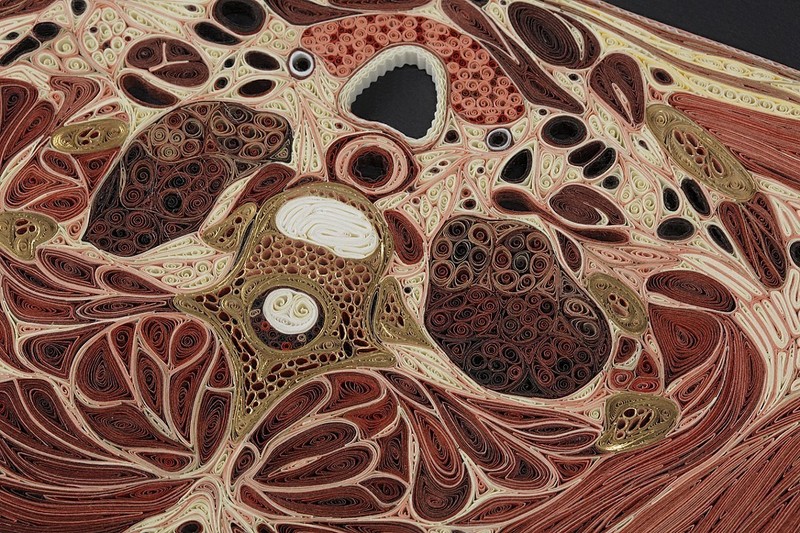 OPP: Admittedly, I know very little about anatomy, but the meticulous detail in your Tissue Series gives the impression that these are pretty accurate renderings of the landscape of the body.

LN: Thanks, I do my best. I’ve maintained that my goal is not to annoy the people who really know what they are looking at, but not to hold myself to the standards of a medical illustrator.

I made my first two anatomical pieces, Female Torso and Head and Torso, in 2010, then took a year away from the studio to become a certified medical assistant. This actually wasn’t prompted by the artwork. Rather, I had a strong urge to do practical work outside the studio and around people. In the end, I found that the solitude and impracticality of the studio suited me best, but the anatomy and physiology study in school was helpful in introducing me to the basics of what I was looking at in the images of cross-sections.

OPP: Do you work from source imagery?

LN: Yes. I work from a combination of medical illustrations (typically older), 19th century prints and photographic images from the government-sponsored Visible Human Project, in which a cadaver was frozen, encased in a block, then photographed at very fine intervals as it was gradually ground away. The stunning images are a main source of information and inspiration for my Tissue Series. 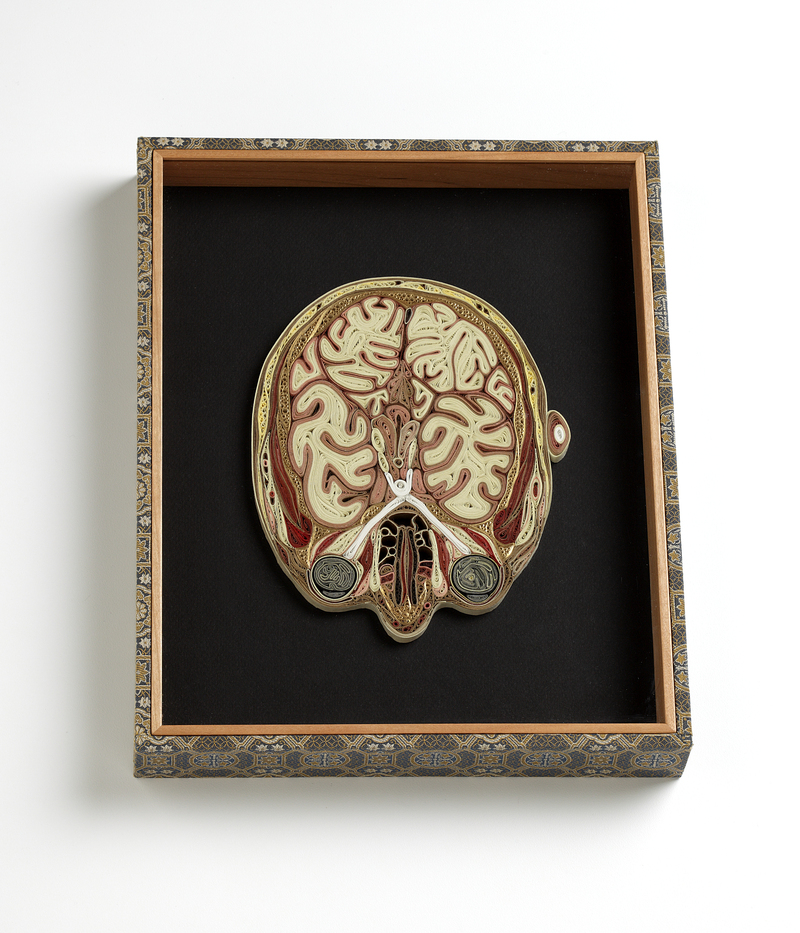 OPP: Tell us about the process of moving from two-dimensional image to paper sculpture.

LN: This is the interesting and challenging part. . . to interpret what I see in my source material as little paper coils in a way that honors the materials as well as the subject matter. I strive to increase the repertoire of shapes and textures I can make with the paper. It’s been an evolving process.

I typically start in a central place and work my way out, hoping for the best. I make each little piece as I go. Some are single coils; others are compound coils (several, or many individual coils gathered and wrapped with an outer strip of paper and shaped as needed). I also make some pieces that start out as large loops that fold in on themselves, then I insert other coils if there are gaps—this has been my technique for brain matter. I glue each new element to its neighbor, and the sculpture comes together like a jigsaw puzzle. I work on top of a sheet of styrofoam insulation so that I can pin the coils in place. As the sculpture progresses, the pins migrate to the periphery. When I'm finished, I remove them, and the piece tends to spread a bit. Then I turn it over, re-pin the outer edge to the shape I want and brush PVA (bookbinder's white glue) onto the back. It now has enough rigidity to hold its shape and to be moved about.

I’ve worked on anatomical studies for about five years now. I’ve developed some interesting means of manipulating the paper that I haven’t had the opportunity to fully explore yet because they didn’t make sense within the context of anatomy. But recently, I’ve been moving toward allowing the paper take the lead. I’m making pieces that are more geometric, inspired by textiles, plant forms and leather book bindings among other things. This has opened up my color palette as well. 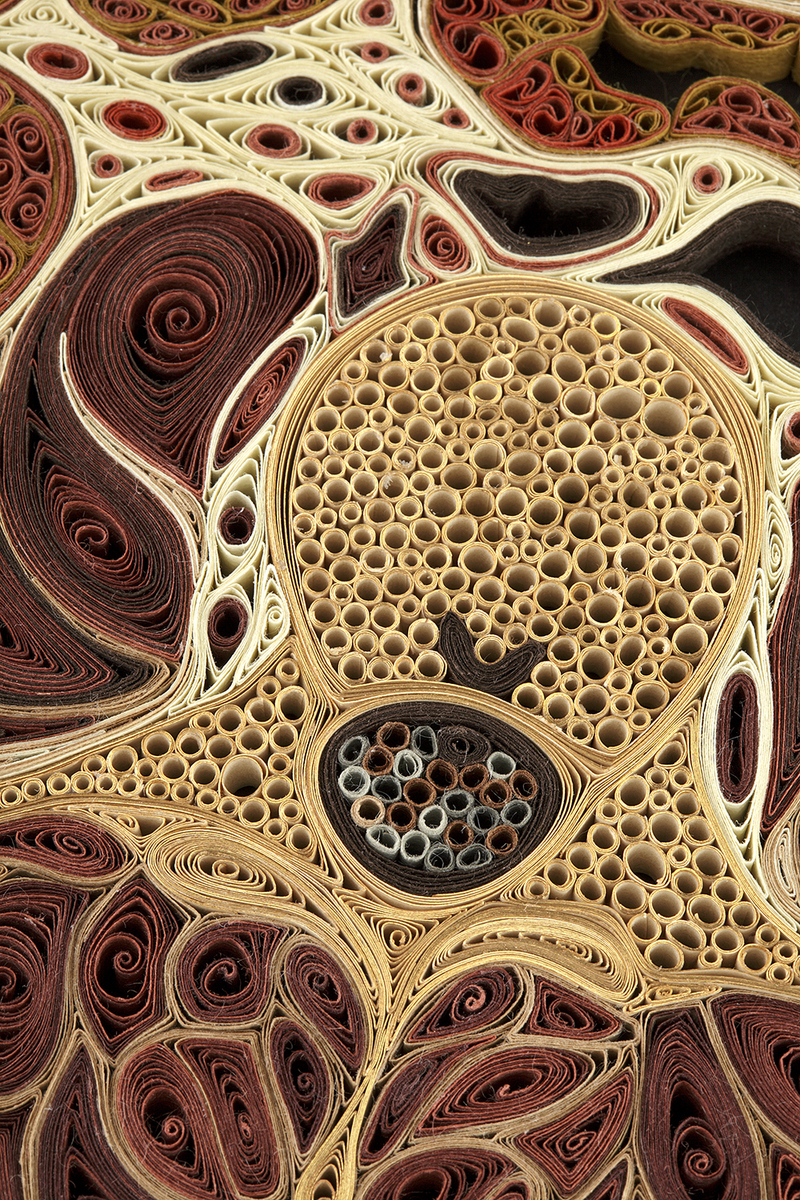 OPP: In your 2012 talk at TEDMED, you spoke of common initial responses from viewers. Initially they say the work is "beautiful" and "kinda creepy," then they start looking more closely. Could you talk about using craftsmanship and beauty to get viewers interested in their own bodies?

LN: It’s a very nice side effect. Craftsmanship is what most interests me and drives my work. If it also draws people in and interests them in something they would otherwise find yucky—I’m delighted. But this wasn’t by design.

My love of craftsmanship seems to be hardwired and life-long. As a kid, I often craved more precise, pointed, accurate tools than I was handed. I remember my Dad, a graphic designer and all-around-inventor, talking to me about making drawings that had to be so accurate that the thickness of the pencil's lead had to be taken into account. I thought that was just the coolest thing! I love a snug fit, a clean line, and I'm happiest when monotasking.

I've always been attracted to small things, and I feel a rush of pleasure when I look at things that have a quality I've come to think of as contained complexity. . . lots of detail in a very sharply and clearly defined space. However, I derive much inspiration from artists who are my opposite, those who work with an uninhibited abandon. Robert Rauschenberg is a favorite art-hero.

OPP: The overlap of religious relics and scientific specimens is a theme in both your Tissue Series and in older works from 2006 like The Ants are my Friends, The White Cabinet and Hillside Cemetery, which are like curiosity cabinets that include found objects, drawings and photographs. How are relics and specimens alike? How are they different?

LN: As I see it, relics and specimens are alike in that they are actual objects that are collected, protected, preserved and observed or displayed. But the relic is typically revered, while the specimen is studied.

I like blurring the distinction. In my mind, this has to do with the amount and type of attention paid to the object and its context. If I treat a dead ant with enough reverence, surround it with velvet and gold leaf and imbue it with importance, can it be a relic? If I recognize the common biological and material nature of a saint’s bone can I release it from its lofty responsibility and view it as a “mere” specimen? 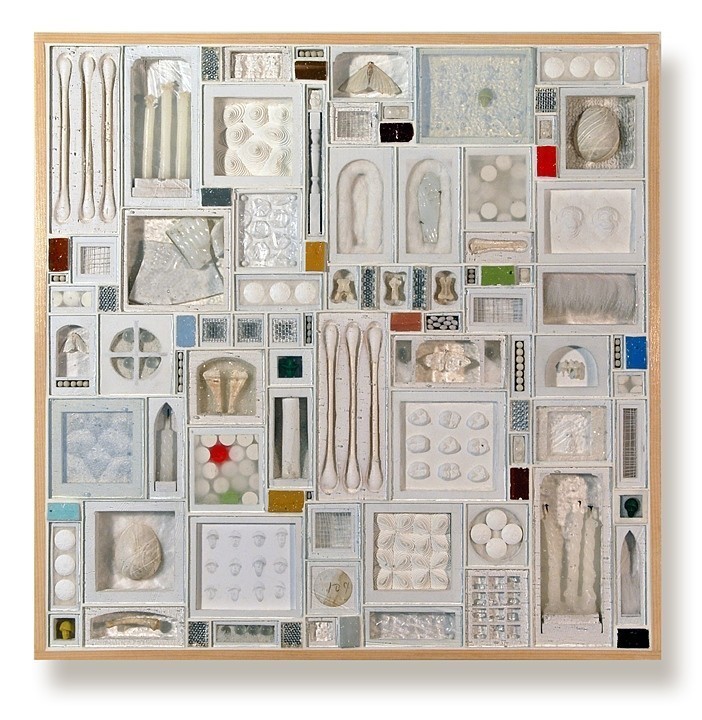 The White Cabinet
2006
Plywood support, glass and grout with found objects and mixed media, including Q-tips, aspirin, smalti, and skunk's tooth
12 x 12
OPP: Exactly! I completely agree. I love the way this makes clear that it is not the objects themselves, but rather the way we see them and think about them. The spiritual teacher Krishnamurti, who is not affiliated with any particular dogma or religion, says that if you pick up any random stick and you stare at it for several moments everyday, soon it will become a sacred stick.

LN: Yes, yes. . . I love the way this is stated here. Thanks for bringing it to my attention! I've got a friend who refers to the "culturally imbued object." His kids start fighting over some random thing because one of them has paid attention to it, and now the other thinks it's hot stuff.

OPP: The point is of course that it is our attention that makes an object sacred, which makes me think of all the time you spend creating your objects. Do you ever think of your studio practice as a spiritual practice?

LN: Yes, in that the work is focused and meditative. Words like dedication and seclusion come to mind. I feel a strong affiliation with the people who work like this—the nun in the convent, the monk in the monastery, the scientist in the lab. To put oneself in the service of making something as well as one can for the glory of. . . here's where I part with religion. It's not god for me. I'm happy with the stick. 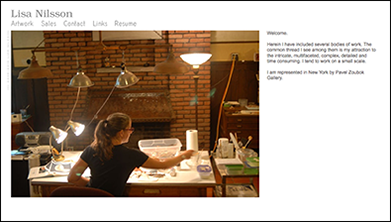