LEAH BAILIS' work creates meaning through an intersection of materiality, humor and textual reference. She alludes to fictional characters and famous creatives in sculptures and fiber-based works that explore the human impulse to adorn oneself. Masks, embellished clothing, accessories and wigs, all of which can transform and empower the wearer. Leah earned her BFA in Film at Bard College in 1998 and her MFA in Studio Art at University of North Carolina, Chapel Hill in 2005. She has exhibited at MASS Gallery (2013), Delaware Center for the Contemporary Arts (2012), Hopkins Hall Gallery, Ohio State University (2010), Lump Gallery (2010) and the Philadelphia International Airport (2008), to name a few. Her numerous solo shows at Vox Populi Gallery (Philadelphia) include Hold Me (2012), Magical Thinking (2010) and Demo (2009). Her focus of late hasn't been exhibiting work. Her two daughters, born 2016 and 2018, are her recent successes. Leah lives and works in the Philadelphia area.

OtherPeoplesPixels: Let’s talk first about the recurring subject of the house/home in your early work made with cardboard. How did your favored material relate to the content of these sculptures?

Leah Bailis: When I first started making the houses I was using photos of houses in North Carolina—where I was living at the time—as my source and wood as my material. I liked the warmth of the wood against the cool white exteriors and the tension that created. I started using cardboard for a few reasons.  It felt like a good way to show the disposable nature of the new construction I was starting to reference. It helped convey a certain fragility. . . that the walls that I built could be easily torn down, that an imposing presence was actually the thinnest of facades. The chainlink fence cage I made could have easily been torn apart. I also thought it was funny, in a pretty formal way, that something so heavy could been made of something so light. 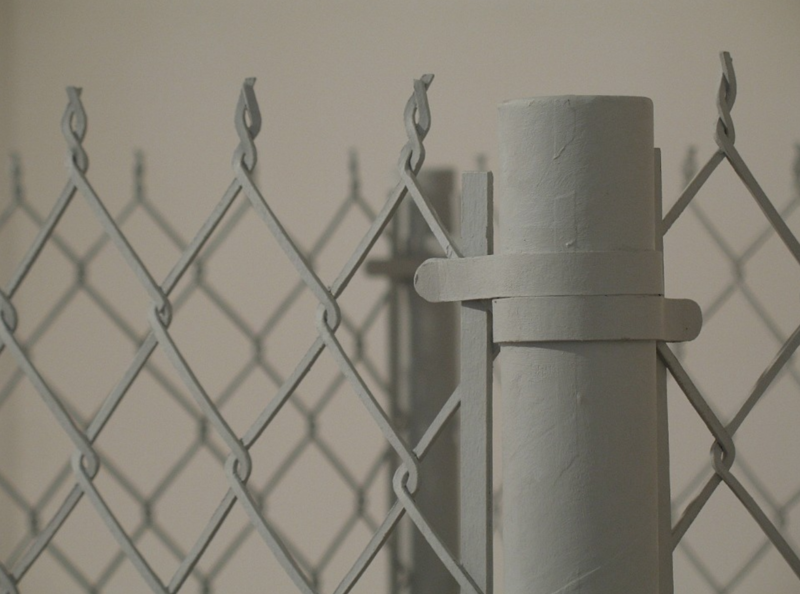 OPP: You’ve used your links page to offer us clips for the cinematic references in many of your works from around 2010-2013. I’m thinking of works like The Resurrection of Inger (From Carl Theodor Dreyer's Ordet), Self Portrait as Dirk Bogarde as Gustav von Aschenbach (From Luchino Visconti's Death in Venice) and BEFORE WE LEFT (BADLANDS).

LB: I added these links to film clips because they were specific sources of inspiration for pieces I have made. I studied and made film in undergraduate school. When I finished school I left with a strong love for the medium as a viewer and an understanding that I wasn't cut out to make films of my own. There are certain cinematic moments that have stuck with me over many years and I decided to try to visually interpret my experience of watching these scenes. I titled all of the pieces to clearly connect them to the moments I was describing. I didn't want to be obscure. I also wanted to lead the viewer to the films that are so important to me. 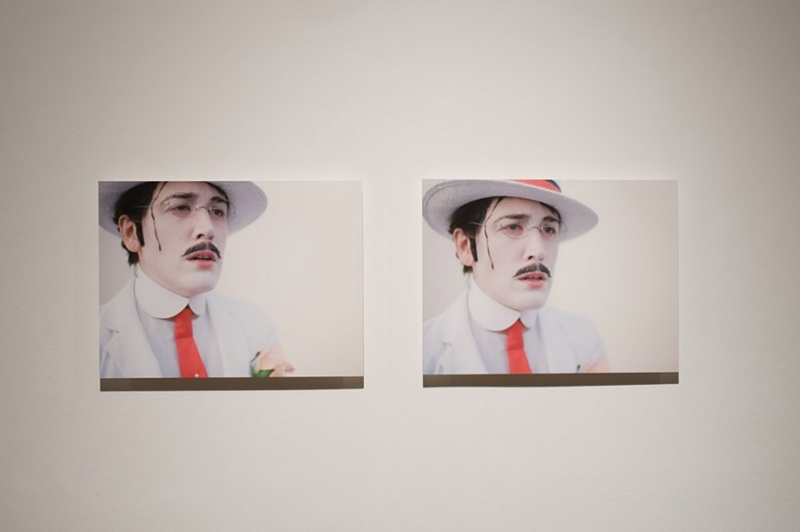 OPP: What gets you about these films in particular?

LB: The resurrection scene in Dreyer's Ordet made me weep audibly the first time I saw it. It also reminded me of a zombie movie. It was beautiful, strange, austere, and magical. The final scenes of Visconti's Death in Venice are so moving. The protagonist gets a make-over to try to make himself appear younger for the beautiful boy Tadzio, the object of his desire. The results are clownish, and as he follows Tadzio around the hot, Plague-infested city, his new black hair dye mixes with sweat and drips down his face. The film images are filled with death, failure, and longing for youth and beauty. A friend of mine drew my attention to the scene in Malick's Badlands where Kit shoots a football.  The football doesn't deflate, so he kicks it flat. It was a funny moment that reveals a fragility of the persona Kit has created for himself. He is acting out being a man. 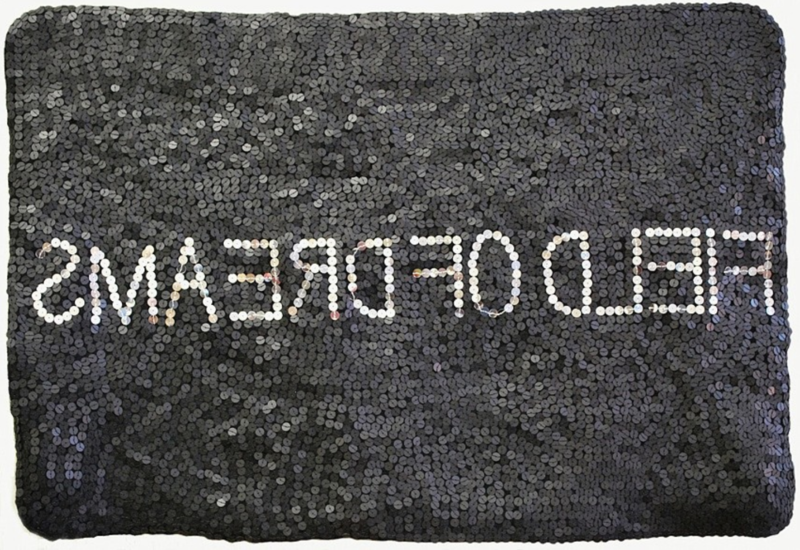 OPP: How do you think about the film-related sculptures as a group? Is it important that we think of them in relation to one another or only to their sources?

LB: There are certain groupings that are important. Magic Mountain, Ordet, and Death in Venice pieces were shown together and relate closely. Magic Mountain is a reference to an excerpt from Thomas Mann's book. He used the phrase Field of Dreams to describe the magic of the projected film image. I sewed the phrase with sequins in order to make a tangible representation of the grainy, flickering, projected film frame. The themes of death and longing in the other two pieces and my attempts to make concrete these fleeting filmic moments, relate back to the sequin piece.

Another grouping that is important to me is My Kuchar, Starring and Ephemera. My Kuchar is a bath mat monument to the (now) late, great filmmaker George Kuchar. There is a moment in his film Hold Me While I'm Naked—a film in which he plays a filmmaker trying to make a film, but all of his actors abandon him—where he comes out of the shower wrapped in a bathrobe, towel turban on head. He is part aging starlet, part Rodin's Balzac, part misunderstood auteur, part overgrown child. The other pieces are imagined detritus of the life that I imagine for Kuchar's character. Ephemera is a flowered long underwear top that I've worn since I was a kid. I embellished it with gold sequins, studs and other shiny things. I imagined his character wearing this shirt under his clothes or alone in his room in his mother's apartment.  Starring  is a scrap of paper I imagined the character carrying in his pocket, repeatedly opening it to read its inspirational message, then returning it to his pocket. 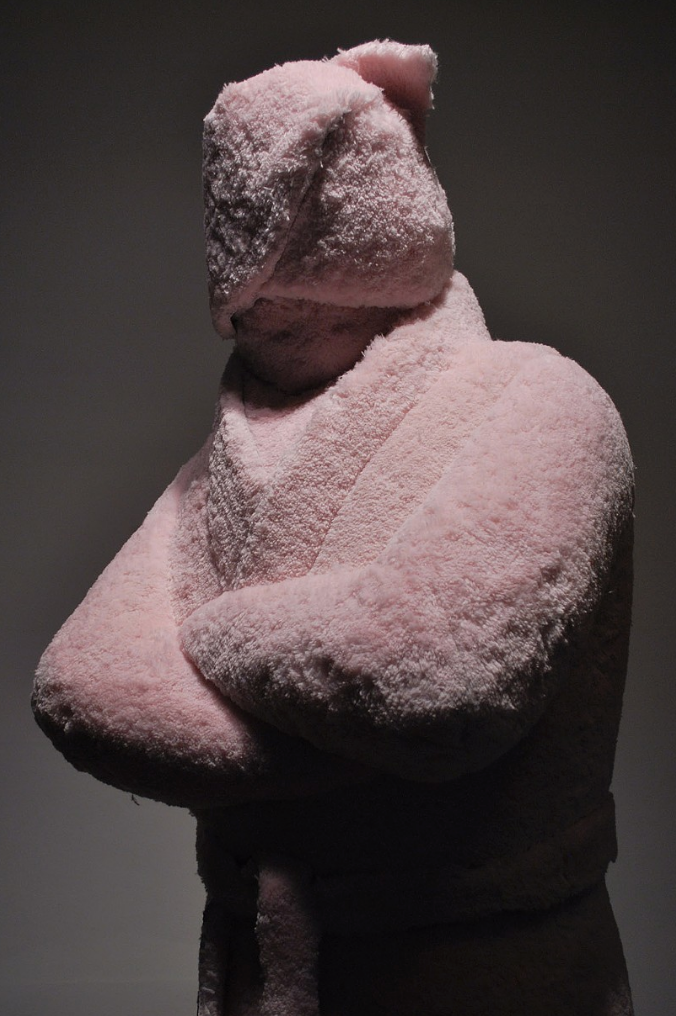 OPP: Would it be going too far to talk about these sculptures as fan art? I should make clear that fan art is not a denigrating term for me, although I acknowledge that many people might sneer at it. I’m very interested in fan art as a creative, engaged way of comprehending the texts we love. It emphasizes the ways that viewers of film and television are not simply passive observers.

LB: It's totally fair to be talking about my work as fan art! And not just of films.  Blue Angel and Ain't Got No/I Got are portraits of Roy Orbison and Nina Simone, respectively. They are attempts to show how much, and specifically how I love both of them as musicians and people. Re-Buiding and Corner are fan art for Gordon Matta Clark. In the end, the work is as much about the sources of inspiration as my own experience being inspired. 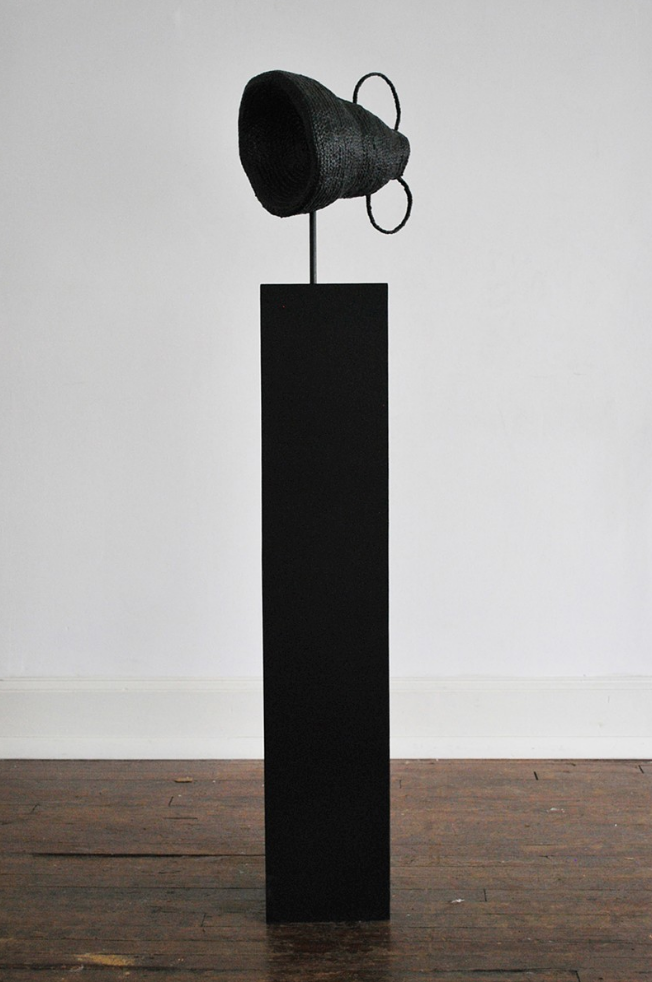 OPP: Since 2015, you’ve been making masks. Before we talk about the specifics, what does the form of the mask mean to you generally? What led you to start making this series?

LB: The masks function in different ways for me. Some are protective, offering a way to watch the world without being seen. Some are transformative, an empowering way to create one's own image. Some of the masks I imagine as a destruction of the wearer’s face. I have been working with these ideas long before I started making literal masks. I even think of the small houses I made as mask-like, deadpan with with window eyes, belying the domestic drama of the house. The series of denim masks I made came out of an invitation to be part of a project for which I would have to make 50 objects. I decided instead of making literal multiples, I would give myself the framework of the denim mask to play with. I had to produce them quickly, which freed me up to improvise. It was a new way of working for me, and I really enjoyed the process.  While some of the masks came from specific sources or ideas, others are intuitive. 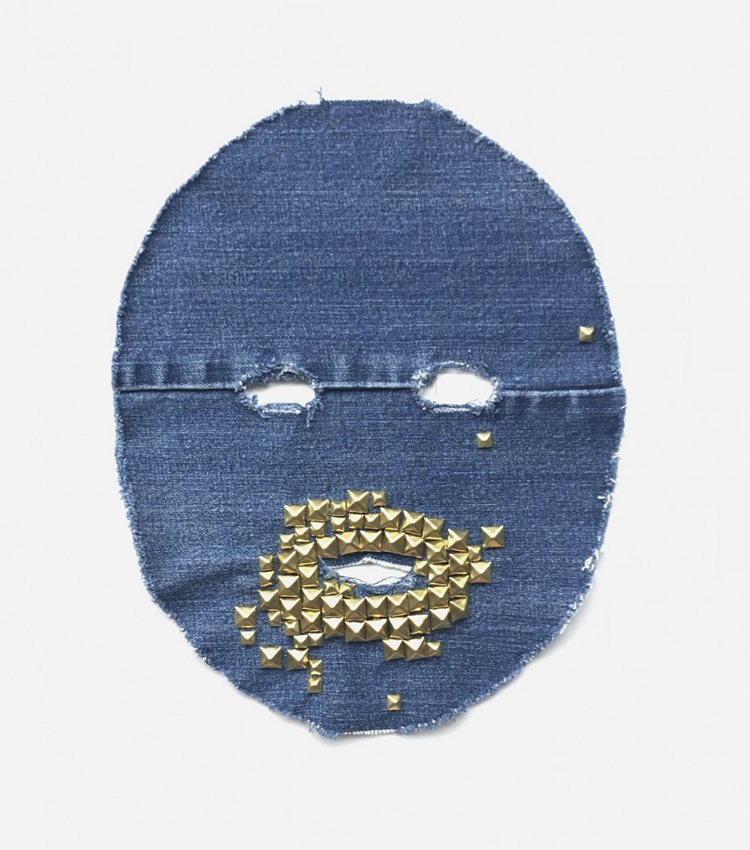 OPP: Can you talk about the relationship between the simple, almost crude fabric bases and your very labored embellishment with beads, stitch or sequins?

LB: A number of years ago, I had the opportunity to see an exhibition of the Gee's Bend quilts. I was really moved by the way well-worn clothing was used in the quilts. The wear on the fabric made the the pieces so personal, connecting back to the physical life of the wearer. The Quilt Mask I made was inspired by the Gee's Bend quilters. I made it out of faded black t-shirts, mostly my own. Hand-sewing the pieces of t-shirt together, was a way to honor the well-worn t-shirt.

Embellishment was a strategy I used with earlier clothing pieces. With Ephemera, the piece about George Kuchar, and Failure, I was thinking about motorcycle jackets—more specifically the jacket from Kenneth Anger's Scorpio Rising—and how wearers decorate them to make themselves look and feel more interesting or important. I like the idea of actively failing to appear interesting or important. I am drawn to things that are shiny. I am drawn to things that are simultaneously funny and sad. I think failure can be heroic. In a more practical way, embellishing with beads or studs or stitches, allows me to be fast and slow at the same time, gestural and labored. I like the idea of taking a long time to fail. 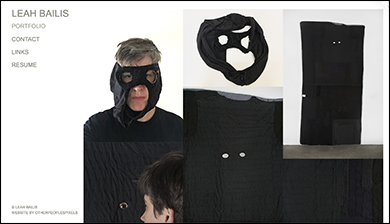