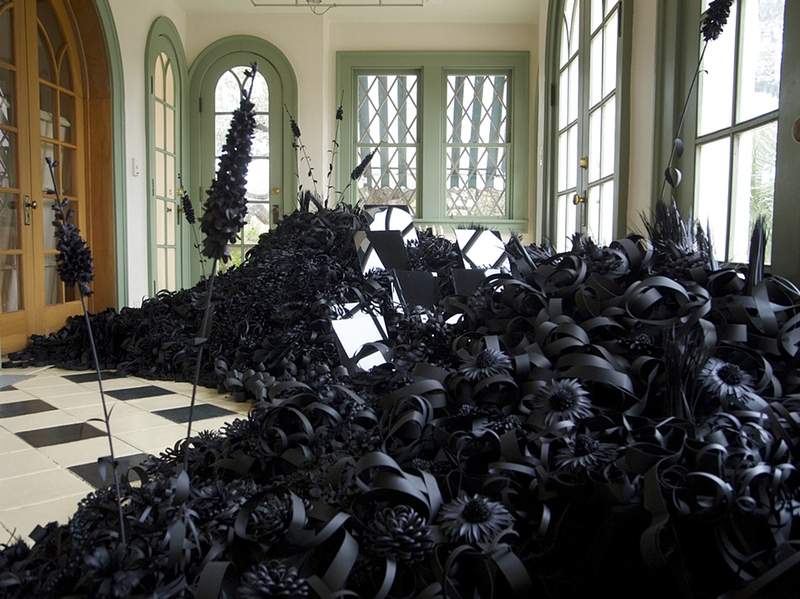 LAUREN FENSTERSTOCK combines art historical references to Modernism with Victorian craft traditions in her dense installations of handmade paper flowers, charcoal and mirrors. Her meticulaously built monochromatic gardens appear minimal from afar, but a closer look reveals an indulgent attention to detail. Recent exhibitions include Two Takes on One Space: Lauren Fensterstock and Steve Wiman at The Austin Museum of Art (TX), Incidents of Garden Displacement at The Ogunquit Museum of American Art (ME) and Dubh: Dialogues in Black at Oliver Sears Gallery (Ireland). Her upcoming solo exhibition Lauren Fensterstock: The Celebration of Formal Effects, Whether Natural or Artificial opens on March 3, 2012, at the John Michael Kohler Art Center in Sheboygan, Wisconsin. Lauren is also a writer, curator and educator living in Portland, Maine.

OtherPeoplesPixels: Your recent work makes marvelous use of quilling, a paper craft that is most associated—despite its long history— with the leisurely labor of upper class women during the Victorian era. Can you explain what quilling is for our readers? When and why did you first learn the technique?

Lauren Fensterstock: Quilling is the art of curling strips of paper by wrapping them around a pin or dowel—artisans used pen quills for this task, hence the name quilling. It has also been called paper lace or paper filigree and was sometimes used to decorate reliquaries when precious metals were not available. Quilling was included in a group of crafts thought of as accomplishments for young ladies including painting tables, embroidery and piano. My work is inspired by quilling, but most of the forms and techniques that I use veer away from tradition. Quilling designs tended to be very flat and symmetrical, whereas I prefer to get a little messy. 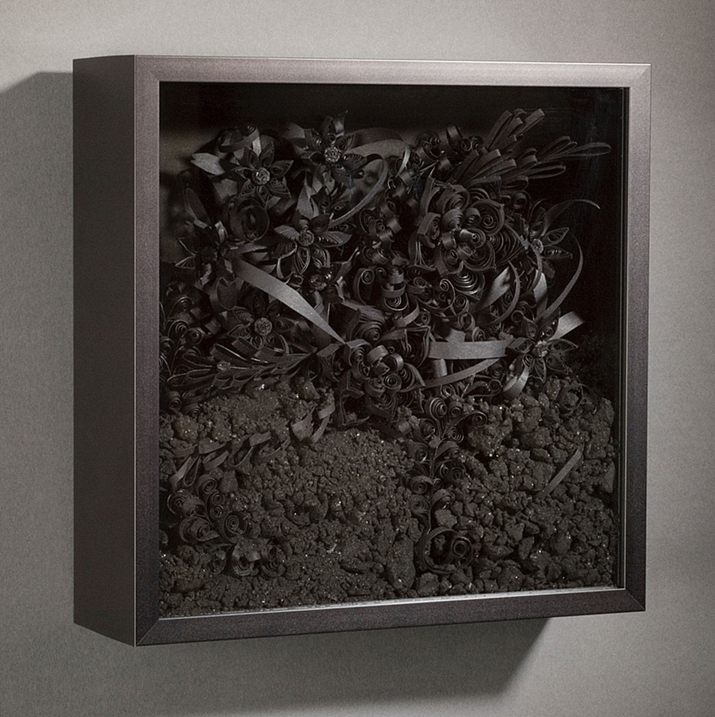 OPP: Looking at the shadow box pieces of Third Nature (2007), it appears you first started quilling in a contained way that is much closer to the historical tradition, which tends to revolve around the creation of heirlooms and mementos. But in the last few years, those framed pieces have grown into site-specific installations which combine the quilled paper flowers with charcoal and mirrors. What initially led to the shift into installation?

LF: One of my original inspirations was an object called a Claude glass. Allegedly developed by painter Claude Loraine, this small black mirror was used to capture scenes for landscape painting. Tourists also took these mirrors into the picturesque landscape to find “scenery.” With my first quilling pieces, I was attempting to make something that approximated the size of one of these looking glasses. Those boxes were partly filled with loose charcoal which alternately obscured and revealed the ornamental designs inside. This was a way to allow real characteristics of nature to speak to the reductions of nature symbolized by the Claude glass. The glass made these pieces highly reflective. Standing in front of one of these pieces, you would first see yourself, then see inside and finally, perhaps, catch a glimpse of the fictitious illusion of yourself inside the scene. But I truly wanted to be inside the landscapes, hence the installations. Gardens are experienced temporally. They change and reveal themselves through different vantage points. I wanted my work to do that. More recently, the shadowboxes have also gotten bigger—up to 12 feet wide—so these have also taken on a more landscape-like presence. OPP: Do you create all the parts for the installations by yourself or with the assistance of others? LF: I have a studio assistant 10 hours a week, but otherwise I make everything. As you can imagine, it is very slow going. I love to get lost in the labor, just like the ladies of the parlor. I listen to a lot of books on tape and a lot of NPR. I love the satisfaction of completing each tiny part. The work involves a lot of repetition, so each part is like an atom in a complex whole. 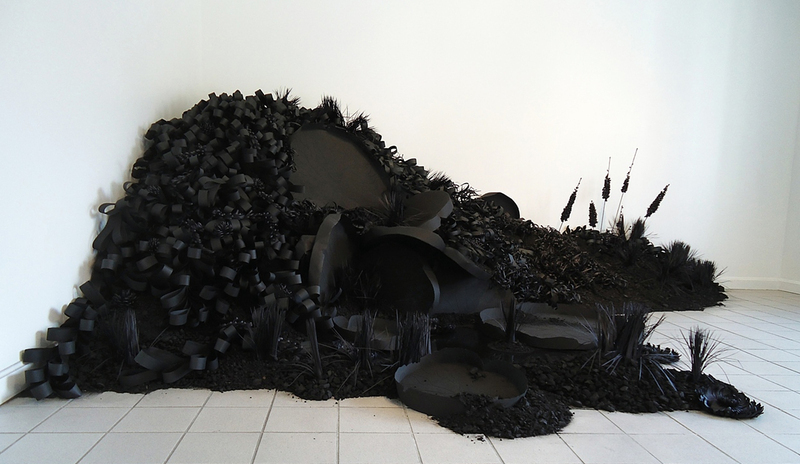 OPP: In works like Parterre (2008), Mound (2010) and Incidents of Garden Displacement (2011), your lush paper and charcoal "gardens" are entirely black. Was the choice to make these works monochromatic an aesthetic or conceptual decision?

LF: The black is partly an homage to my original source—the Claude glass. It also makes reference to other sources that I think about: Ad Reinhardt, Malevich, minimalist sculpture in general. I am interested in the way that people have actually reshaped nature through gardens to create a metaphoric image of the universal order. These images vary widely, from the Apollonian hierarchy of Versailles to the democratic nostalgia of the English landscape. My work draws from multiple sources, including garden theory, minimalism, metaphysics, ultimately mixing them together. The monochromatic tone provides a kind of equalizing effect. The black also allows the work to appear totally minimal. At first you think you are looking at a black hole, a void, and then you realize that this is actually an insanely complicated object. Then it slips back to looking like the void again. The color black is magical. The potential for depth, shadow and confusion is immense—especially when it is paired with reflective surfaces.

OPP: I definitely see the explicit reference to Minimalism—and I like the word play!—in Colorless Field (2012). But as I looked through your website, I was thinking more about mourning than Minimalism. The quilling done all in black led me to think of another Victorian-era craft, hair art, which was often made with the hair of a deceased loved one as a memento. Is anything being mourned in your installations?LF: I’m very interested in Victorian mourning culture and even own some hair jewelry. I love that stuff. Victorians used those mementos to bridge the gap of loss. The objects were like touchstones that allowed individuals to connect across the divide of life and death. For me, this is a gesture approaching the sublime—something I might associate more with Modernism. But the universal visual language of Modernist images often leaves me feeling cold. I’m interested in figuring out how to attain a kind of non-objective experience with objects. How can we reach the sublime through familiar materials and the natural world? In a way, I want to take the successes and failures of all of these various fields, blur them together and allow the best and the worst to have it out. It is interesting to see how something like 17th century French formal gardens and Victorian crafts can work together toward similar goals, but I also like the way they expose the other’s shortcomings.But am I mourning something? Maybe. I was a major teen goth, and I’m a sucker for a good sweeping melodrama. I think, maybe, I just like getting lost in a drama, whether it’s rooted in something real or in a total fabrication. But then again,  I am also the kind of girl who cries during commercials! 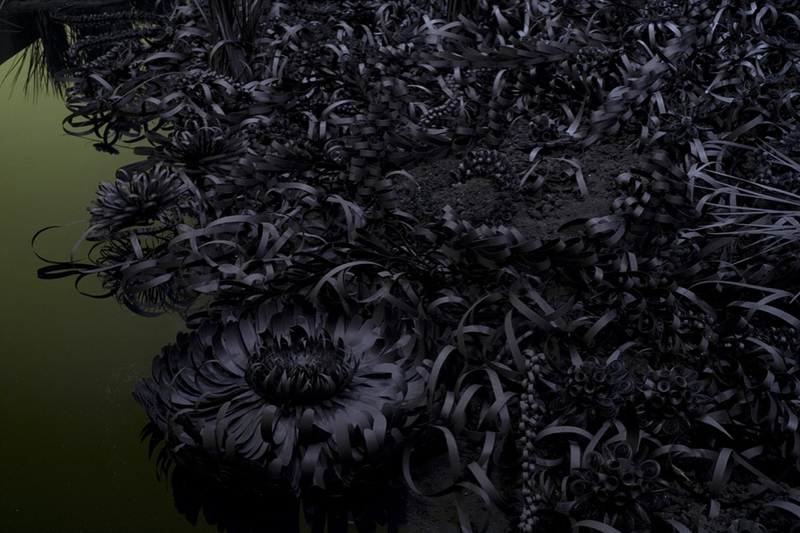 OPP: Do you consider your work to be part of a feminist art tradition or do you make work from a feminist perspective or position?

LF: As I suggest above, I am interested in blurring boundaries to create a sort of equaling effect. I like the idea of mashing together things that feel incongruous. The artist Robert Smithson has been a huge influence on my work, and I regularly appropriate forms and ideas directly from his projects. Pairing references to a macho earth artist with a ladies’ parlor art? It may seem strange, but that feels right to me. I draw freely from a variety of sources, both high and low, natural and manmade, male and female. I suppose attempting to escape the prescriptive confines of language in that way could definitely be considered a feminist directive. OPP: I think that synthesizing the binaries that exist in our language is absolutely a feminist directive because binaries pit the culturally-defined masculine and feminine against each other. Blurring the boundaries between those things is a significant act, in my opinion. We’ve already talked about quilling, but I’d love to hear more about your interest in Robert Smithson. How has his work influenced yours?LF: I find him fascinating. He had a vast knowledge base and applied it in so many media—writing, drawing, earthworks, sculpture. His essays are fantastic. I particularly love his writing on Frederick Law Olmstead and his photo essay Incidents of Mirror Travel in the Yucatan. Mirror Travels was inspired by a Victorian travelogue Incidents of Travel in Yucatan by John Lloyd Stevens. I’m interested in the way he draws from history and slyly recontexualizes our understanding of the past. His notion of time is also unique. For Smithson, history is a specific period, and we have the potential to move into an era after the end history, where time is no longer understood as a progression.

OPP: What new direction in your studio or upcoming opportunity are you most excited about?LF: My show at Kohler marks the culmination of a body of work that has spanned the last five years. After this, I have some time to experiment, to read and research. Currently, I'm working on a public art commission for Maine General, a new hospital opening in September in my home state of Maine. Then have a solo show at Sienna Gallery in Lenox, Massachusetts coming up in August 2013. I’m excited to work toward that show without a sense of predetermination. I want to find something new. I’m just starting to do some research into the history of Romanticism and thinking a lot about escaping rationalism. I’m not exactly sure what’s coming next, which is a bit scary and also thrilling. I have been thinking about color. I keep looking at Anish Kapoor’s use of red. He talks about red being even darker than black. I want to find out if that is true… 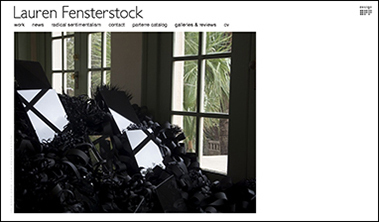