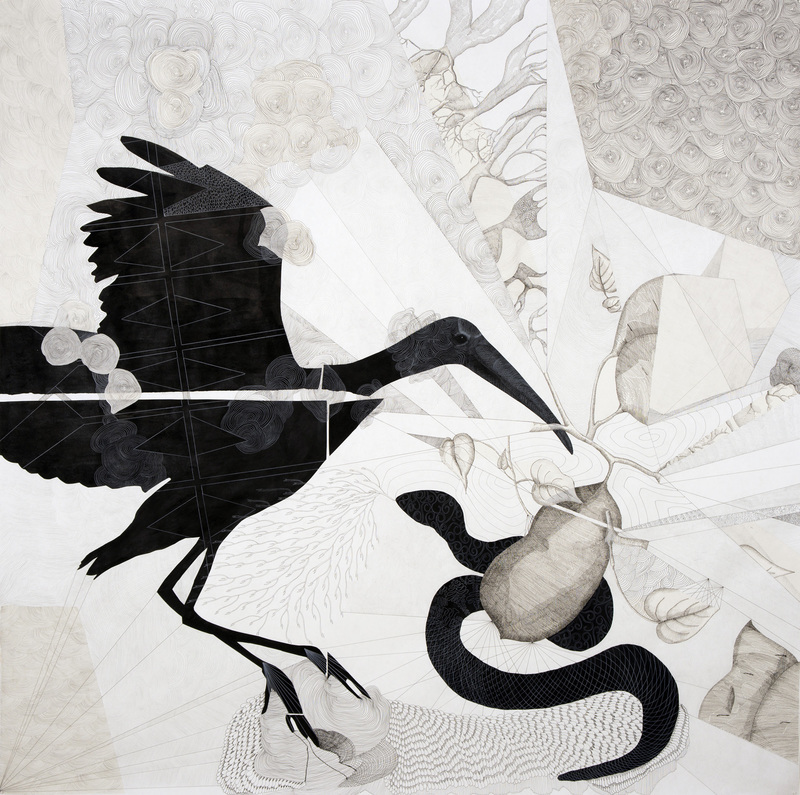 KIRSTEN FURLONG explores the interplay between culture and nature and the multifaceted relationships between humans and animals in her drawings, prints and fiber-based installations. In her project Unchopping a Tree, based on the eponymous W.S. Merwin prose poem, she laments the lost lives of trees and the impossibility of reviving what has already died. Kirsten earned her BFA (1995) from the University of Nebraska in Omaha and her MFA (2000) from Boise State University in Idaho. Recent solo exhibitions include Kirsten Furlong: Repeat and Shift (2014) at Enso Arts in Boise, Idaho and Standing Still and Moving Through The Wilderness at Coconino Center for the Arts in Flagstaff, Arizona. Her work is included in Dog Head Stew | The Second Course, which just opened this week on October 19, 2015 at Gallery 239, Chadron State College in Nebraska. Another group show, Paper West, opens on November 5, 2015 at Gittins Gallery in Salt Lake City, Utah. In September 2015, she was the Artist-in-Residence at Crooked Tree Art Center in Traverse City, Michigan. She is the Gallery Director and Curator for the Visual Arts Center and a Lecturer at Boise State University. Kirsten lives in Boise, Idaho.

OtherPeoplesPixels: In your artist statement, you say, "animals serve as emblems of nature and as metaphors for human desires." It seems to me that human desires aren't that different from animal desires. What does it mean for our relationship to animals that we turn them into metaphors for our own experiences rather than imagining their experiences?

Kirsten Furlong: Animals, in many cases, carry the weight of our cultural baggage which can make it very unclear what anyone’s actual desires may be, animal or human. The most basic and necessary human desires may be for water and air, and yet we engage in activities that foul these resources and deny both humans and animals access to them.

However, a species becoming emblematic has occasionally been useful if they get our attention due to a larger narrative or problem. For example, the near destruction of bald eagles from DDT and the subsequent ban and recovery. There is such an incredible complexity of animal identities, politics and cultural identities tied to the land and species that reside therein. This dynamic takes on particular qualities here in the Western U.S. Thoughtful consideration of the experiences of animals such as wolves, sage grouse, or the giant Palouse earthworm would certainly steer our treatment of their lives in a different directions than they seem to be currently heading. 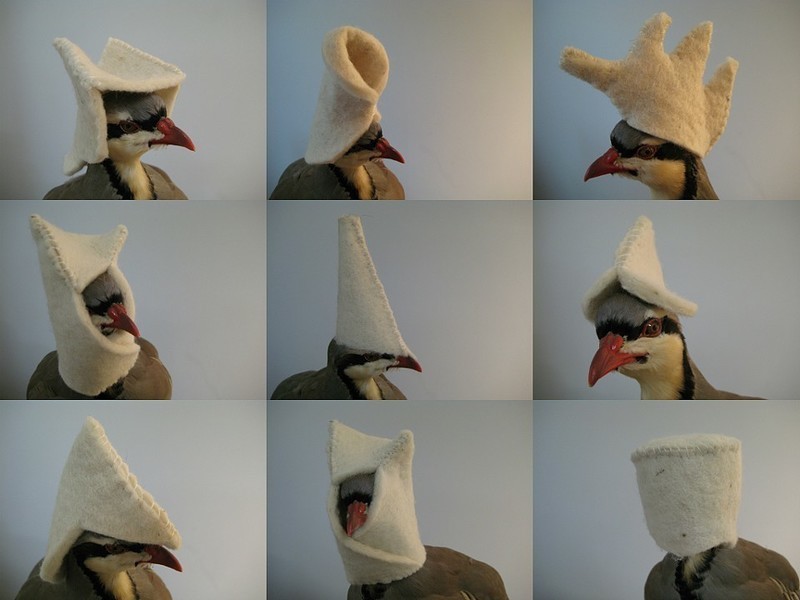 OPP: Could you tell us about your experimental garments for animals? Why do these birds need hats?

KF: The “garments” started as three-dimensional studio sketches created from hand-made and hand-stitched wool felt. The initial forms were created as protective outer-wear with architectural qualities designed for a few particular birds, insects and small mammals. These forms were intended for a project in which they would be placed in environments to be discovered by these species. The subsequent interactions, collaborations—or lack there of—would generate ideas for the future completed designs. While impatiently awaiting these collaborations and sometimes storing the forms on the head of a taxidermied chuckar partridge in my studio, their unintended, uncanny resemblance to various hats or historic head gear became apparent: dunce caps, papal mitre, bonnets, chaperons, hoods, and military gear. So, while there is no need on the bird's part for a hat, providing one points out, in an ironic way, the uniquely human need for adornments and accoutrements. 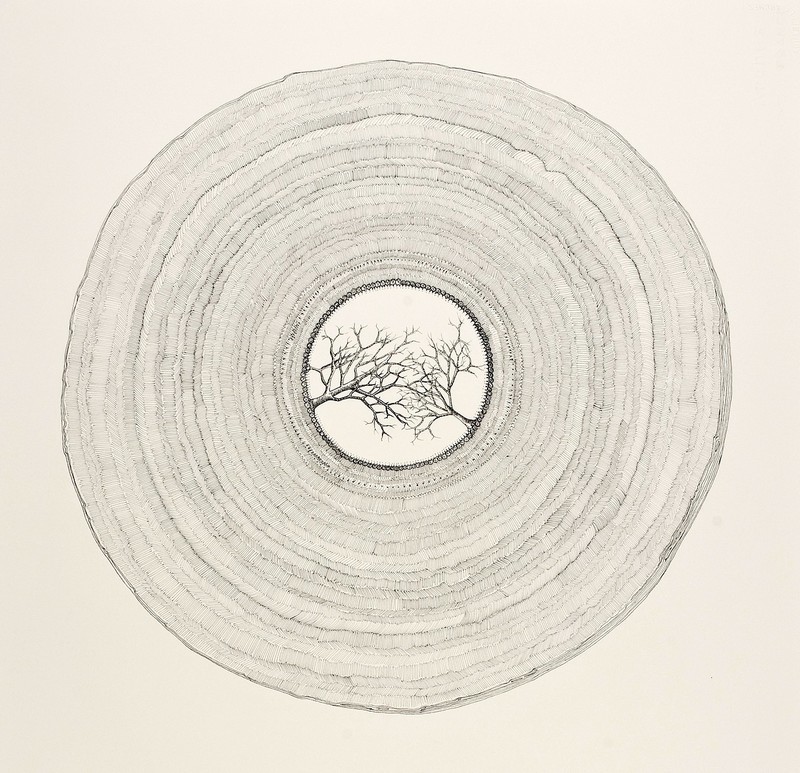 OPP: How does your use of repetitive mark-making—in the forms of drawing, cutting and sewing—in pieces like Standing Still - Tree Circle (2012), Twice: Migration (2009) and Wolf Mouth (2013) support the content of your work?

KF: My process is to mimic forms and patterns made by plants and animals: tree rings, concentric lines on seashells, woven grass in a bird nest, fractal patterns on ferns and corals, spider webs, or the meandering line of a snake. This is a way of understanding natural processes via imitation and representation using the tools of the artist —the pen, the blade, the needle.

OPP: I like imagining Nature making marks in the same way an artist does, as if it is cognizant and self aware. Perhaps we should go back to the tradition of anthropomorphizing Nature itself, as used to occur in ancient myths . . . might we treat it better if we thought of Nature as a creative being deserving empathy?

KF: This is not just a belief of the past but a way of thinking that is embraced in a number of cultures, and it can have a profound impact on how one exists as a part of Nature. Many dismiss systems of thought like anthropomorphism and animism or consider them only as cultural constructs, but I think a more nuanced approach that crosses the boundaries of natural sciences and arts/humanities is where the most interesting discussions are taking place. 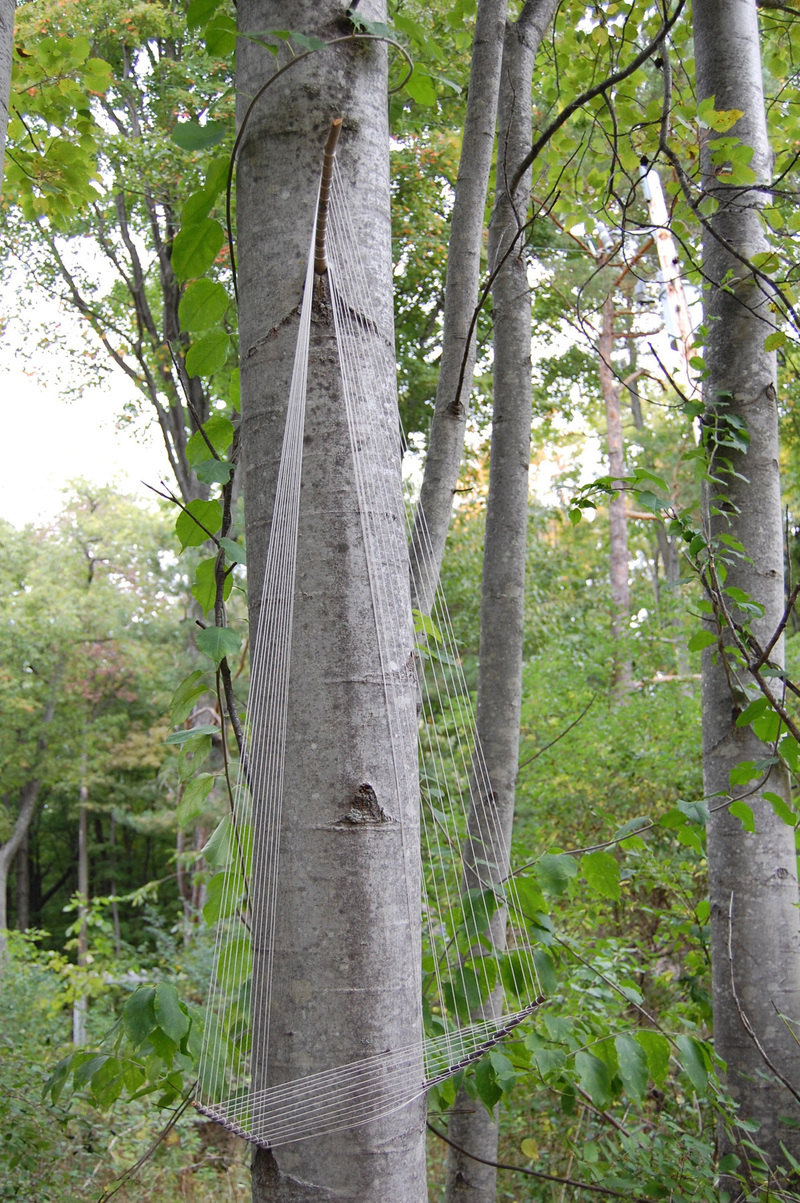 OPP: You just returned from a residency at Crooked Tree Arts Center in Northern Michigan. What drew you to this residency and what did you work on while you were there?

KF: I have never visited the area, and I like to invigorate my studio practice by situating it now and then in unfamiliar places. Also, I had the opportunity to teach a workshop called Image Layering with Printmaking, Painting and Drawing. I introduced a variety of techniques for mark making including frottage, chine colle' and image transfers. For the frottage process, I demonstrated how to use found textures of wood grain, stones and plants with printmaking inks and graphite on thin papers. Then I showed the process of cutting and adhering these images /patterns to thicker papers and adding additional images with transfers /drawing/painting.

This temporary move from the late summer high desert to the leafy landscape of Northern Michigan's forest preserves and great lakes provided much to investigate. The most fascinating discoveries on the shore of Lake Michigan were the unique geological features - the fossil patterns of Petoskey stones and chain coral influenced some of the drawings I worked on during the stay. The Crooked Tree program is unique in that the artist stays in a private studio and apartment adjacent to the residency hosts' home. The hosts are very knowledgeable about the area and the local flora and fauna and shared a lot of useful information about the region. I also created some site specific works related to my Unchopping a Tree series in a grove of poplars a short walking distance from the studio. I had the opportunity to visit Headlands, one of few designated International Dark Sky Parks, which has me thinking a lot about darkness and nocturnal environments as threatened natural resources. 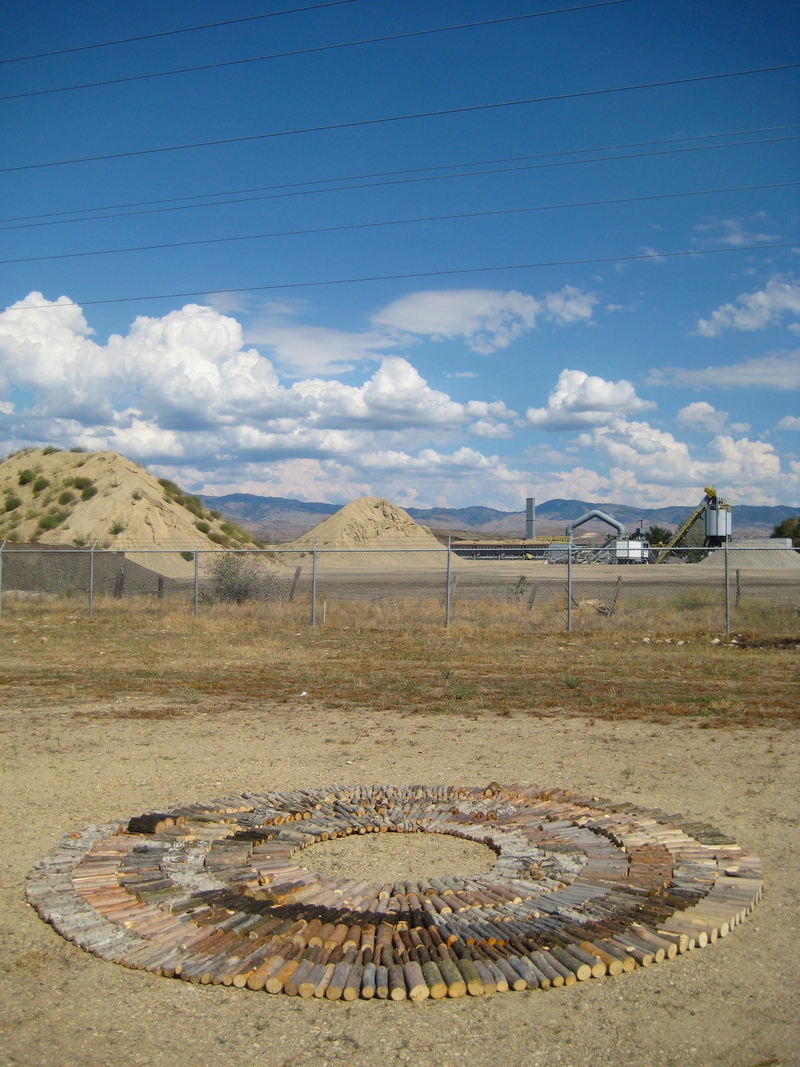 KF: It's interesting to consider. Unchopping a Tree was inspired by a W.S. Merwin prose poem of the same name that was originally published in 1970. It’s publication and the earthworks are contemporaneous with the 1970s environmental movement and federal legislation for water, air and wilderness. They also coincide with my youth. Although I lived in cities and had no connection to wilderness or National Parks, I was still influenced by the cultural milieu of Woodsy the Owl, Smokey the Bear and collected what I could find from my backyard for “nature crafts.”

As an adult, I have visited many of the major earthwork sites of the West. If we can consider the trajectory and its many branches to include the influence of artists like Joseph Beuys and Richard Long, than perhaps what I’m doing is an offshoot from that. The major difference is the scale. Monumental alterations of the landscape like Double Negative, Spiral Jetty and Roden Crater are gigantic gestures. I tend to focus on smaller, and in some cases, nearly invisible patterns and processes. I concentrate on the details, which is what really struck me about the Merwin work. This written work essentially instructs the reader how to put back together a tree that has been cut down and all of the directives are, of course, impossible. The passages about sawdust and spider webs and nests are what really got me thinking about intricacy and what one likely wouldn’t see at all. That is the larger metaphor that moves me. When it come to the environment, we’ve gone so far down the path of destruction and removal, it seems unlikely that the damage can be undone or even sufficiently repaired. 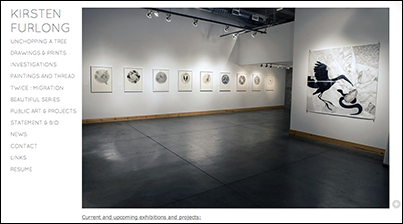