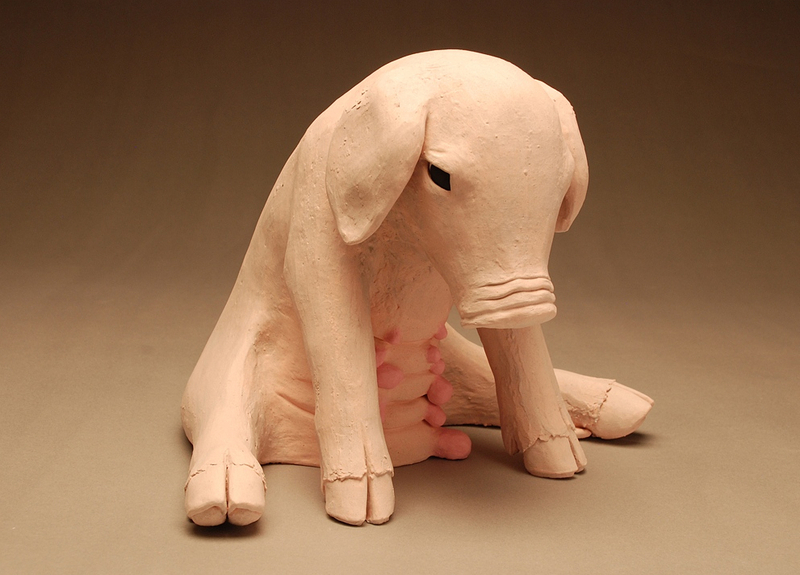 In her life-size terracotta sculptures, artist JENNIFER KOCH reveals the reproductive exploitation of female factory farm animals. Her calves, piglets and chicks appear emaciated and vulnerable. Their facial expressions reveal an experience of intense suffering and terror. Research into common agribusiness practices and a lifetime of working with animals fuels her art practice. Jennifer received her BFA from the University of Massachusetts at Dartmouth in May 2012. Her first solo show opens on November 27th, 2013 at Colo Colo Gallery in New Bedford, Massachusetts. Jennifer is currently based in Worcester, Massachusetts, where she is a full-time artist-in-residence at the Worcester Center for Crafts.

OtherPeoplesPixels: Tell us a little about your history as an artist. Have you always worked primarily in clay?

Jennifer Koch: I have been drawing and making things since I was a little kid. From middle school through high school I was primarily interested in photography. I didn’t use clay until my senior year of high school. It was love at first touch! I initially applied to college as a ceramics major, but for a long time my love of ceramics was in competition with my interest in photography. I changed my major several times. Eventually, ceramics won because I found I could be more creative with clay. It's more hands on. I love physically building things: sculptures, pottery, weaving and jewelry. Though I appreciate painting, drawing and photography, I’m not much of a two-dimensional art maker. 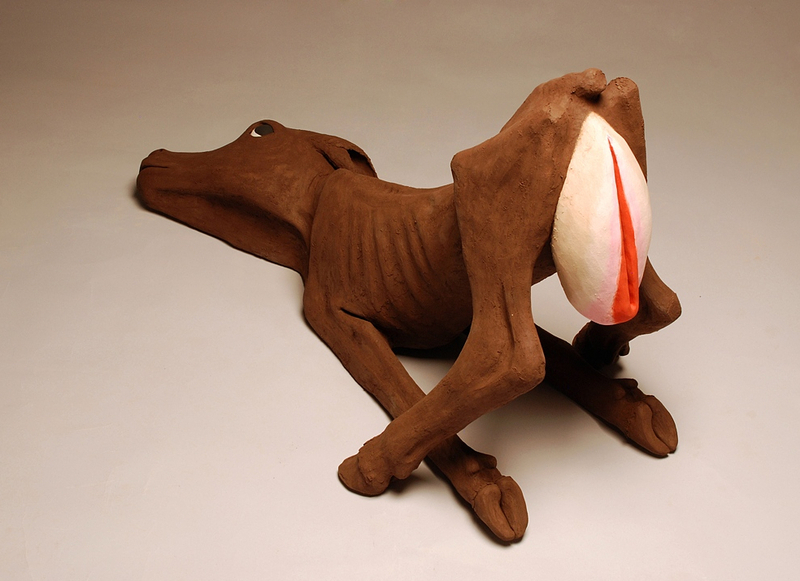 OPP: I absolutely relate to the animals you portray. I feel pangs of sympathy; they feel so human to me. Their expressions and postures are so pitiful that I found myself grimacing as I looked through your website. The one that affected me the most was Sophie. For a brief second it was a little funny, because I thought of how my cat presents herself to me and has no problem sticking her business in my face at unexpected moments. But then, of course, I noticed how thin that calf is and how she looks like she is being forced down, and then the whole sculpture became about rape and violation for me. In fact, the other calves, Anna and Laura, are also shown in what feel like extremely vulnerable sexual positions. Can you talk about this choice?

JK: I read a very interesting book a few years ago called The Sexual Politics of Meat by Carol Adams, which contributed to my interest in the connection between animals and feminism. My work is specifically focused on the reproductive exploitation of animals. As a woman, I find it the most abhorrent part of the entire animal agricultural system, which depends on the continuous pregnancies of young animals who will die before they reach adulthood. The animals are artificially inseminated while they are essentially babies themselves. There is no consent in this process—the animals have no voice. I want to provoke the question, “Is this rape?” If it’s not, why not? If it is, or if thinking about it makes us uncomfortable, perhaps we need to readjust our actions as consumers of the products these animals produce. If we recognize that animals are sentient beings and have their own desires, should the right to consent be exclusive to humans? I recognize that this is a very challenging and sensitive thought process, but I don’t believe in shying away from something because it’s controversial.

Many animal byproducts are contingent on the reproductive exploitation of female animals. Cows are kept continuously pregnant in order for factory farms to get the maximum amount of milk and all other dairy products. The male calves are unwanted and become veal. Eggs are byproducts of female chickens' reproductive systems. If males chicks hatch, they are disposed of and usually in horrific, but industry-standard ways—like grinding them up while they are still alive or throwing them into the garbage where they die of suffocation, exposure or starvation. In my work, I present the problem of using animals as objects. There is a natural connection between the methods of oppression and exploitation of women and of animals. 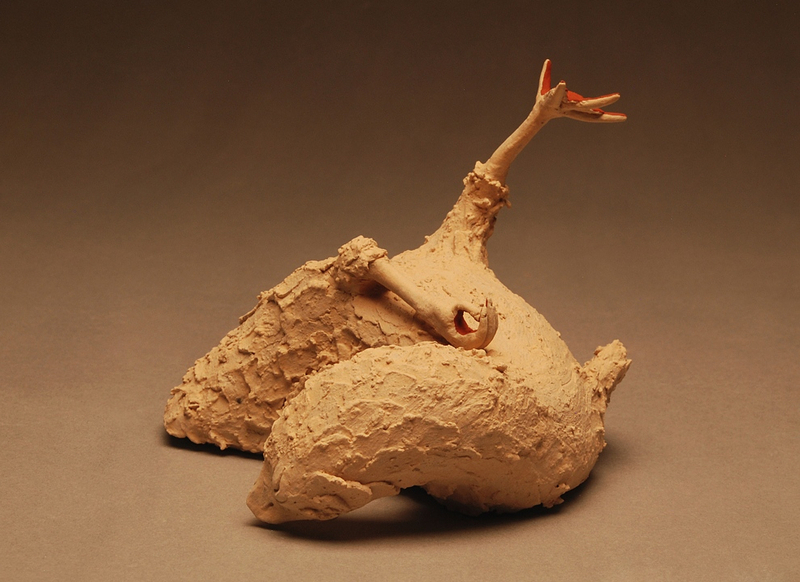 OPP: Well, I was going to ask you if it is significant that all the animals have female names, but now I think the answer is clear. But do the responses to the sculptures change when viewers read the titles?

JK: The titles were of much debate during my final thesis critique in May (2012). Initially, it was important to me that viewers understood that all of my sculptures are female, and I hoped to increase empathic response by giving them human names. But I got the feedback that the titles change the message of my work, that the human names turn the work into a metaphor for the human experience. That is something I want to avoid. It’s all about the animals. Based on that feedback, I've decided to change the titles to something more informative. I had started considering new titles this summer and then got distracted with my new work and forgot about it until I was sent this question! Thank you for the reminder!

OPP: You’re welcome. I have to say that I love the female names as titles, but they did lead me down that path to thinking about my own suffering as a human being and the experience of suffering in general. It’s my natural tendency to see metaphor, even where there is also literal truth. JK: I think that’s not just your reaction but human nature. We can really only experience the world as humans and are barely even able to relate to other humans who are not very similar to us. I was hoping to reach people via empathy, but it’s very difficult for people to think outside their own species, and I overlooked that in my optimism.

JK: I only have a few alternative names worked out for the pieces that are on my website. Laura, the calf with the large udder, will potentially be renamed Mastitis, which refers to an inflammation of the breast tissue due to infection. Nicole, the piglet that hangs from a steel nipple on the wall, will be renamed Weaned. There are also new pieces with similar titles that aren't yet on my website. Some of these only appear in studio shots on my Flickr stream right now, because they haven’t yet been professionally photographed. 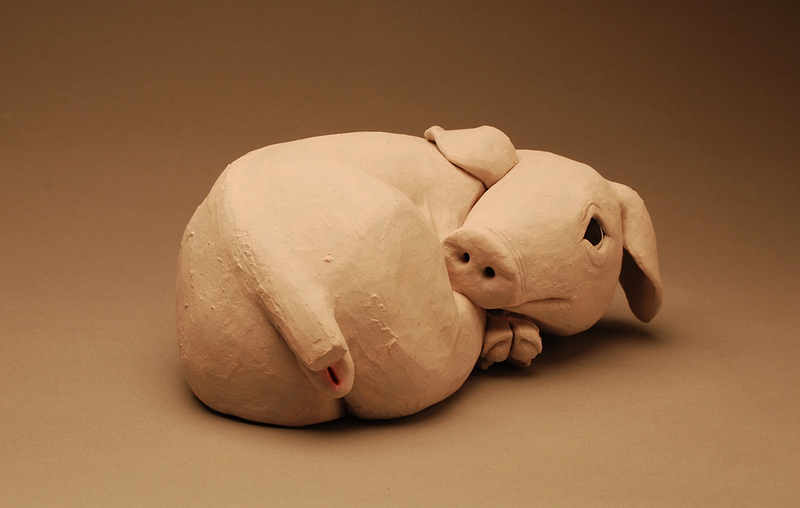 OPP: You mention in your statement that you "create work that is conceptually driven by research of common agribusiness practices and from the animals’ physical experiences and emotional responses." And it's obvious that your portrayal of the suffering of animals has both personal and political significance, because you have a link to Vegan Outreach on your artist website. Are you disappointed if viewers contemplate the suffering alone and don't go that extra step of considering their own choices about whether to eat meat?

JK: It's not just about meat consumption; it's about the use of animals who have their own desires and lives. I am using emotion as the entry point to get people to think about the consequences of using animals for personal benefit in their daily lives. Animals are treated as objects in our society and have been for a very long time. I hope to add to the discussion about whether their exploitation is ethically acceptable.

Animals are sentient and emotional beings who form relationships with each other as friends and family. If left alone, they lead their own lives independent of humans. Is it ethically acceptable to deprive these animals of their freedom to lead self-guided lives just so that we can have the products we want? I might not have been challenged to think about this, but my family frequently rescued abused or neglected animals when I was young. I got to see their personalities evolve as they adjusted to more comfortable lives. My horse, Jester, was probably the most influential. I saw him change from aggressive and anti-social to calm. Now he plays with other horses. Professionally, I was a dog groomer for seven years; for a few years, I was also a caretaker of dogs, cats, goats and birds. I’ve also worked at a veterinarian office and at a small pet supply store. I just can't view animals as objects.

My life had to change when I realized that I used them in my own life, not just as a food source but also for entertainment, clothing, beauty products and health products. I want to share that thought process through my art. I don't expect many people to change their actions as a result of considering my sculptures, but I want to keep the discussion moving forward. I would be disappointed if I wasn’t successful in creating a debate. Social change is a long process, but I believe in it. My work won't likely be the turning point, but it’s a reminder and a push. My work aims for an idealistic outcome, but my expectations are realistic.

OPP: You've recently graduated with your BFA and are currently an artist-in-residence at Worcester Center for Craft. How has the residency changed your work?JK: The Worcester Center for Crafts has been great so far. I have a wonderful work space and supportive colleagues who aren’t afraid to give me the feedback I need. It’s very different from being in school because there are no deadlines except the ones you make for yourself. It has been a challenge to learn to work in a self-directed way. There’s a learning curve, but eventually I’ll get the hang of it.

I knew before I started the residency that I’d be working smaller, since I don’t have access to an enormous kiln any more. I plan on getting back to larger pieces this winter and tackling a new construction method. It’s taking some time to work up the nerve, because there WILL be failures. Let’s face it: no one likes failures, even if they’re expected.

In the meantime, I’m experimenting with new surfaces. I’ve been trying out underglazes and oxides at different firing temperatures, as well as adding acrylic paint and gouache after firing the clay. I’m also trying to bring more context and narrative to each piece. I’m using interactions between other animals and objects to bring more meaning to the animals’ expressions. I’ve made two sets of mother sheep with baby lambs that are reaching for each other. The interaction is between the mother and the baby as well as with the obstacles separating them—a wooden palate in one piece and a fibrous thread in the other. 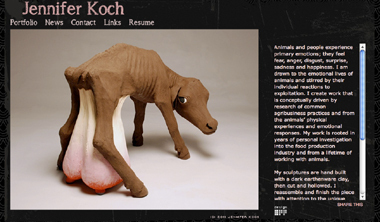