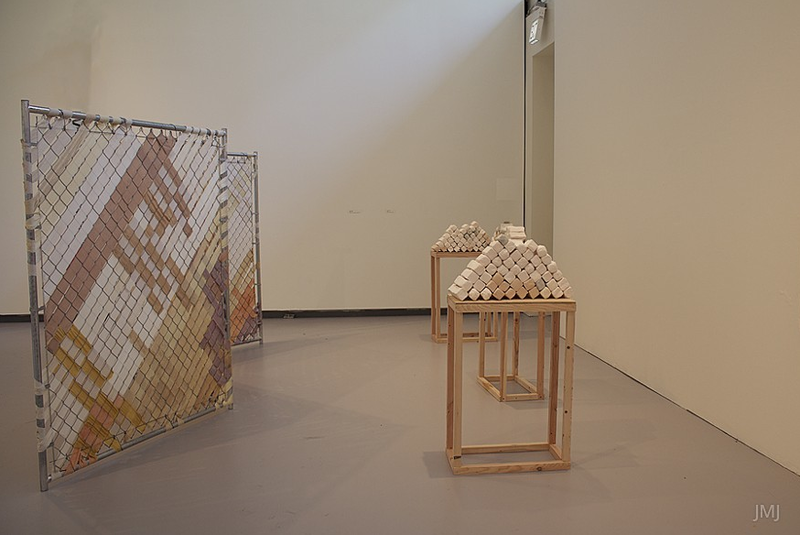 JACLYN JACUNSKI has a background in activism and works primarily in printmaking, installation and sculpture. For several years, she's created work in response to the empty lot next to her apartment, exploring the intersection of personal and collective rituals as they manifest in the cityscape. She looks for evidence of gestures of resistance, examining the ways individuals assert claims to public space. Jaclyn earned her BFA from the University of Wisconsin, Madison (1999) and her MFA from the School of the Art Institute of Chicago (2007). In 2013 she was Artist-in-Residence at Spudnik Press (Chicago), where she debuted her solo exhibition Site and Source, and was the Director of the Chicago Printer’s Guild. Since 2013, Jaclyn has worked as a Research Associate at Earl & Brenda Shapiro Center for Research and Collaboration in Chicago, where she lives.

OtherPeoplesPixels: What are some examples of the personal and collective rituals you refer to in your artist statement?

Jaclyn Jacunski: I’m thinking specifically about the realm of the commons and a reciprocal exchange between individuals and their surrounding communities. I am interested in small acts of resistance, defiance, public exclamation and protest. I look for evidence of these types of moments visible in the landscape. It is hard to speak of it so specifically; I love disparate happenings, handmade gestures and signs. I am interested in situations like when people save their shoveled parking spot with a chair in a Chicago snowstorm. Or the way people insert found items— sets of keys, a lonely mitten, or once I saw a black patten leather high-heel shoe—into a chain-link fence in hopes the owner will walk past and find them.

Another example of a compelling social ritual is the sparing match between the City of Chicago and graffiti writers. I find it so strange that an ugly vacant lot tarp would get tagged, and then the City would go as far as finding matching green tarp paint and paint over the graffiti meticulously. Their efforts did not really cover up the tag, but enhanced it into something a bit more elegant and disguised. At the right angle or in the right light, the tag was still incredibly clear despite the new paint job. Yet, this strange left-over gesture seemed to pacify the community’s need to be graffiti-free. My block got heavily bombed almost every night, and I thought, Man, just give the kids a space to write! But I imagine the city workers take a secret pleasure in this painting activity, and everyone has an unique role their community’s public space. 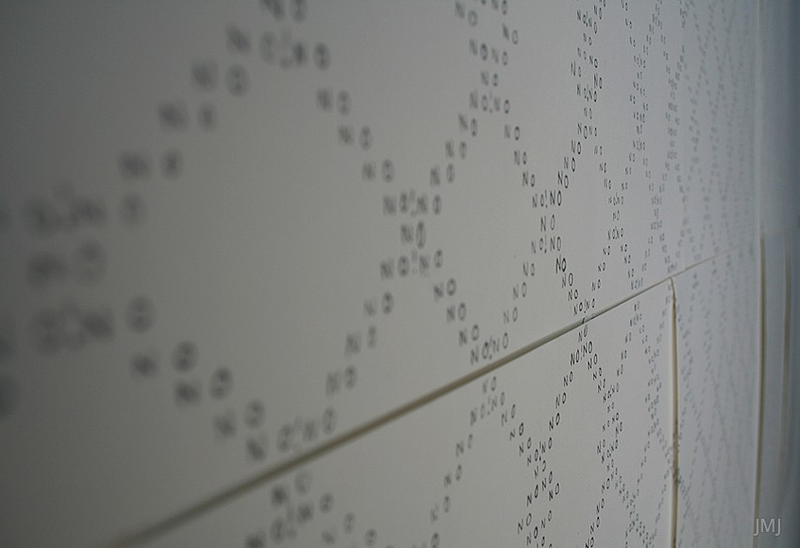 NO! Site and Source (detail)

OPP: You've been exploring the chain link fence, formally and conceptually, through print, ceramics and installation for several years now. What's fascinating to you about this particular object and all the ideas it contains?

JJ: There was a very specific moment I decided to take on the loaded symbol one day. I was randomly the looking through old German design and architecture magazines at the library. I read a long article about the design of chain link structures and webs in the build environment. I xeroxed the images and paneled them on to my studio wall where they hung for a long time, just as thought.

This ubiquitous object, which I encounter everyday on my walk to work, is complex symbol for a vibrant city with many contradictions. It represents a border between public and private, wealth and poverty. It indicates what is built, vacant and developing. The fence contains its own script for social relations. It acts as a barrier to entry, meant to demarcate zones of ownership or membership. It is to be climbed, torn down, obeyed or defied. In my practice, the fence is a useful tool for production: slicing shapes, forms and material, re-distributing surfaces. It acts as a viewing device with the linear components and negative spaces serving as viewfinders that frame the territory of the other.” The repeat pattern abstracts and re-orients spatially. Its linear repetitions confuse one’s focus, shape-shifting forms. . . the eyes begin to play with objects in space creating new possibilities. 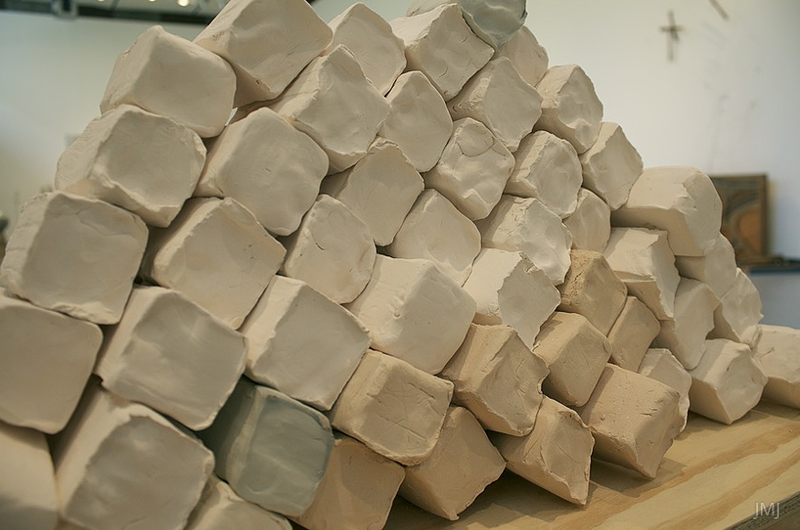 OPP: Please describe the process of creating the ceramic piece Brick (2013), in which you make tangible sculptures of empty space. Could you talk about how this gesture relates to the empty lot surrounded by the fence?

JJ: In the work with the bricks, I brought in bags of porcelain clay into vacant lot adjacent to my apartment on a busy Chicago street. In the lot I would systematically pressed the clay through the wire of the fence, using the shape of the negative space to be filled and space the brick with chain link wire cutting the shape. I did this repeatedly for several weeks systematically working up, down and across each open space until I made enough bricks to form a panel. Each brick varies in size, length, shape, color from using different clay along with letting the bricks go in to random community kilns to be fired. Some bricks clearly show my fingers prints and others came out clean and smooth. While doing this I had talks with my neighbors about nothing particular, but it was nice. It was rare that I had opportunity to be outside and talk beyond the basic “how are you” and the all-important Midwest weather talk.

At the time I was thinking a lot about the neglect of things, why places become marginalized and how bricks are part of the Chicago lotscape at demolition sites. The bricks are leftover artifacts of plans, development, investment and creativity. Bricks sit in empty lots leaving evidence of the rapidly transforming character of the neighborhood that became personified by the abandoned lot adjacent to my apartment. Fenced off from the rest of the world, the lot acted as a gathering point for neighbors and a repository of the history of the place. The land lay dormant, awaiting the tide of gentrification that would make constructing condos profitable, but the looming development was always present. The gesture of making bricks was the hope to build anew, laying claim and taking over the space without permission. Making the bricks was an act of considering our productive and cooperative selves moving beyond the typical order that creates and sustains blight. 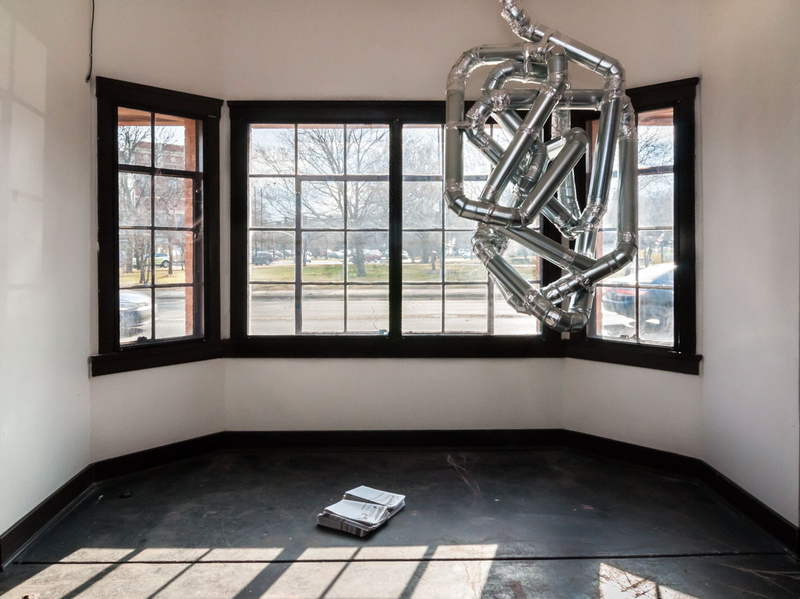 OPP: I recently saw your work at Comfort Station in Chicago. Tell us about the unexpected occurrence with your indoor/outdoor sculpture Pipeline.

JJ: My sculpture at Comfort Station was made of household ductwork that forms a pipeline. With elements inside and outside of the gallery, it simulated movement through the lawn, down through the concrete and into the gallery, where it came to a halt, hanging from the ceiling, knotted and bound. The metal outside the building was sawed off and stolen about three weeks into the exhibition. (I blame Chicago metal recyclers—jerks!) I was shocked that someone would take a risk of getting caught for something that didn’t have much value. The work was in a highly visible, high traffic, public area.

However, it got me thinking a lot about value. A few bucks were worth more than the public art to whomever stole it. A city planner can never dictate the experiences we have in public spaces, how we value those spaces or how we feel valued in those spaces. It hits home the complications of property in any neighborhood. Logan Square is an interesting example: a private landlord owns the grassy area next to Comfort Station that looks like an open, public park. Before the establishment of the gallery, the grounds were widely used by neighbors for summer picnics, but this use has been in noticeable decline. This highlights the underlying tensions from the changes in the neighborhood. I see these instances as clues that some people are not considered or included, nor do they feel part of this space. 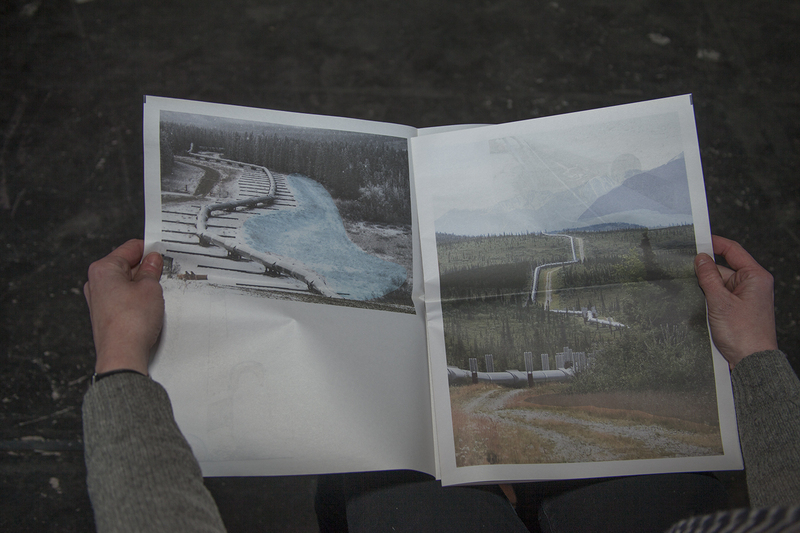 OPP: The sculpture was accompanied by a print take-away. Could you talk about the "populist ethic of print" and why it is the perfect medium to explore the social and political implications of shared space?

JJ: Prints are significant tools for creative resistance and protest. In my twenties, I was involved in a lot activist campaigns. Agitprop was all around me. I appreciate print's wide distribution to the masses and its role in the women’s movement. Posters, zines and flyers are non-precious ways to communicate, to be opinionated and to be powerful.

The take-away newspaper is also called Pipeline and was placed a pile on the gallery floor for visitors. It juxtaposes collaged internet images of pipelines with people waiting in line to question what is the perceived agency of the community in their neighborhood. I used media images of the lines to build and draw meandering forms in order to play with ideas of drawing, but also to respond to what seems to be years of daily news reports on the Keystone Pipeline. I was really intrigued by one report in particular by an Alberta artist, Peter von Tiesenhausen, who stopped oil corporations from putting a pipeline through his 800 acre property by copyrighting the top six inches of his land as a work of art.

I love every aspect of the field of print: the materiality, its process, history, tools, strategies and concepts. I especially love the versatile way print can exist in the art world and public spaces. Felix Gonzales Torres' work has been such an inspiration to me. I've put his silver posters in my office, his skyscapes in my studio and his candy in my pockets. I would think about him and Ross long after I left the exhibition. I love that I can give art away for free, share my questions and promote my point of view in both serious and playful ways which can extend beyond an exhibition. The flexibility of print allows a viewer to look at my work later, then pass it on. It all seems like a fair equitable exchange in the commons of ideas. 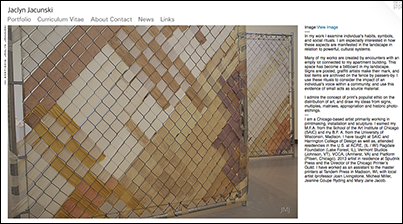