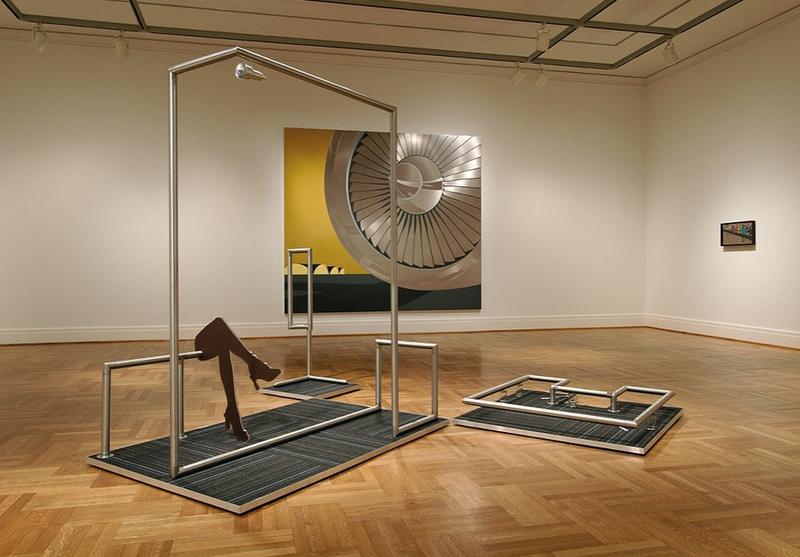 IAN MONROE is drawn to edges, literally and figuratively. Influenced by both architectural and virtual space, he explores the illusion of perspective and our related "complicity and a potential sense of disembodiment" in large-scale, two-dimensional collages, predominantly made from adhesive vinyl. Ian received his BA from Washington University in Saint Louis (1995) and his MA from Goldsmiths College in the United Kingdom. Since 2003, he has had solo exhibitions in five countries: England, Spain, Switzerland, Germany and the United States, not to mention group shows in at least five more. He is currently working on a major public commission for a new building in Leicester Square in London. His upcoming solo exhibition (title TBA) at Horatio Junior (London) will open in November 2015. He is represented by Galeria Casado Santapau (Madrid), where he will have a solo exhibition in 2016. Ian lives and works in London.

OtherPeoplesPixels: Talk about the wonders (and the challenges) of your staple material, adhesive vinyl.

Ian Monroe: Vinyl allows me to paint without using paint. I am able to build the image, layer by layer. All of my early work was sculptural and I still primarily gravitate to the three-dimensional, hence the perspectival nature of the images. This is also reflected in my tendency to consider them as built rather than painted images. It's a subtle distinction, but it allowed me to use carpet, linoleum flooring, Formica and paper in two-dimensional works. Had I used paint, I may not have not considered these alternative materials. There are, of course, frustrations with vinyl. The biggest is the industrially-limited colour palate of the material. I can't just mix a new colour! On the other hand, limitations sometimes force creative solutions, and I find the process of squeezing the most out of a constrained palate an interesting challenge. 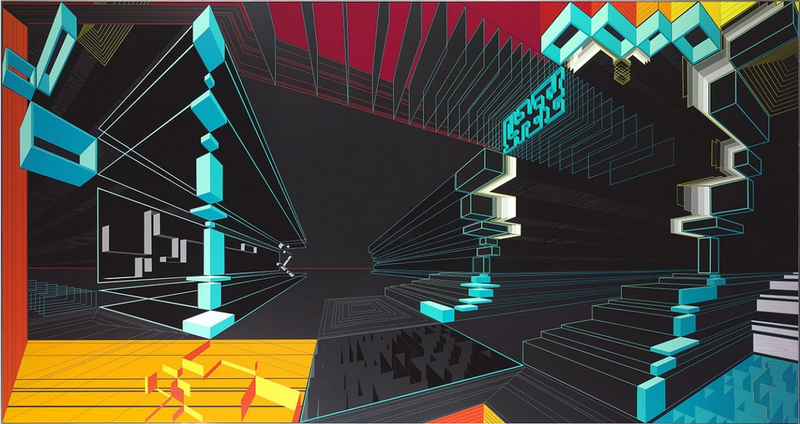 OPP: Formally, your older work is all hard lines, angles and edges. Did this formal quality grow out of the material itself or is it more about source imagery? What influences you visually?

IM: Conceptually, architectural space certainly is an influence, but so is the notion of a virtual or invisible-yet-collectively-agreed-upon-space like the internet. Like the perspectival image, which is simply an agreed upon illusion, many of the spaces—airports or modern banking systems, for example—we deal with today rely on us all behaving according to an unspoken, but very constrained set of rules. The work is therefore meant to play both with our complicity and a potential sense of disembodiment that these spaces create.

Materially, the hard edges and angles were initially driven by the slice-and-cut nature of collaging the material. When you collage one material to another, it very rarely has any blending (except perceptually or metaphorically in the way two things may be visually or conceptually conjoined). I started making very thin lines with the vinyl and filling in geometric forms with the basic shading of a light, medium and dark colour. In the process, the schematic—as opposed to the rendered—possibilities of the images really excited me. I started to see all kinds of possibilities for images freed from the constraints of virtuosity that paint usually requires; I could deploy the language of diagrams or technical drawings for potential spaces or structures. In this way, they operate like huge architectural-conceptual proposals. I also enjoy that they run counter to a kind of expressionist language often found in painting, and so I embraced the razor sharp and unequivocal edge of the collaged material. 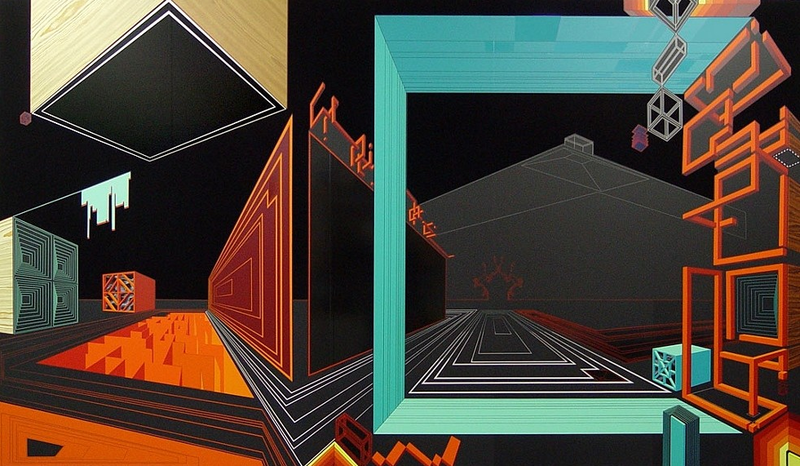 OPP: Could you talk about how "collage can be seen as a function of 'edges," an idea that you first explored in an essay titled "Where Does One Thing End And The Next Begin?"

IM: I hinted at this in the questions above, but the essay essentially develops a set of tools to understand how various collaged images seem to function and how they can be read. There was an open call for an essay in the catalog entitled Collage: Assembling Contemporary Art, put out by Black Dog Publishing in 2008, and I had been thinking about the idea for some time. I was musing about how a collage by John Stezaker operates totally differently from one by Ellen Gallagher or one of mine. That led me to see that the one unifying element across all collage, regardless of the imagery or conceptual drive of the work, is the cut or torn edge. Unlike a painted or a drawn image, in which there is (usually) no absolutely clear edge between various images or materials, collage is a collection of things colliding and interacting at their edges. I thought that this may be the key to understanding how collage actually functions, so I used the essay to explore how various types of edges interact and form meaning. Some types of edges I delineate include 'the corrosive edge', 'the municipal edge' and 'the chimeric edge.’ The entire idea is fully developed in the essay, so I’ll refer anyone interested to have a read. 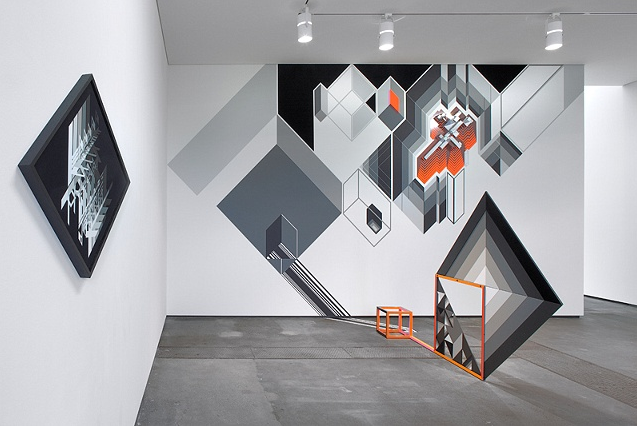 The Instantaneous Everything
Installation view
2008


OPP: Your two-dimensional collages have always manifested a dynamic sense of space and depth. But you also make three-dimensional sculpture, which compliments the wall-based work. How did these works interact and inform one another in your 2008 show The Instantaneous Everything?

IM: I was very loosely playing with a concept in physics that entire universes arise with their own unique rules and structures, seemingly instantly and as complete structures. The big bang is the theorized, instantaneous genesis of our universe. The strange conundrum here is that we as humans are simultaneously the creators of this theoretical structure and the actual product of it! So which came first? I saw some parallels to my art practice where the ‘rules’ for making work—perspective, diagrammatic and hard-edged shapes, encoded language—all seem to arise with their own theoretical structure and yet at the same time I am the supposed author and am in control. Visually, I sought to highlight this sense of a complete but co-mingled universe in which the distinction between the two-dimensional and the three-dimensional was unimportant. Sculptures appeared to fall out of the images and images flowed out of sculptures and onto the floors and walls. I think it was a first step, and like all shows one does, you realize that the ideas can be pushed and developed. So I am working on a follow-up show. 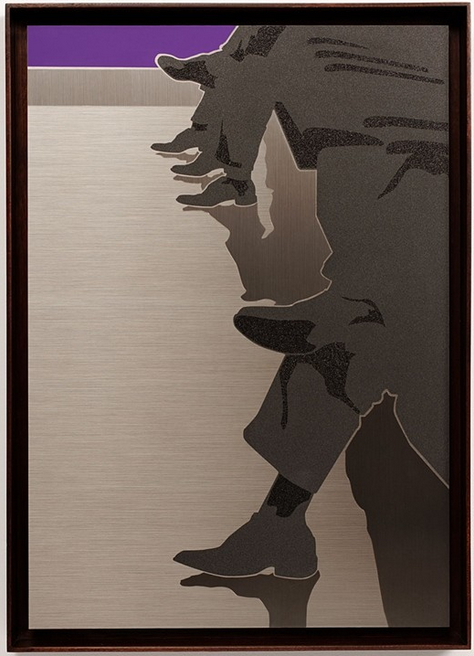 OPP: Recent work from Currents 105: Ian Monroe, your 2011 solo show at Saint Louis Art Museum, had numerous references to in-transit spaces like airplanes and airports, as well as hotels, pay phones and swimming pools. There's way more empty space than in earlier work and the figure is present. How did this apparent shift in focus grow out of older work?

IM: As I mentioned in one of the answers above, airports and other ‘non-places,’ to use a term coined by Marc Augé, have held a long-standing interest for me. For the show in Saint Louis, I decided to make a new body of work that reacted to and reflected a specific local architecture, but not in a site-specific way. Saint Louis has a long history of architecture and flight and has many mid-century buildings of note. Lambert Airport has a particularly interesting story. Completed in 1956, the building was the first major commission by a young architect named Minoru Yamasaki and was an icon of mid-century modernism and optimism in a newly global world. In a strange and ominous coincidence, I discovered one of his last major commissions was the World Trade Center complex in Manhattan. This trajectory, embodied so succinctly in these two places and spaces and in his buildings, was one that transitioned from a glamorous new optimism of the jet-setting global population to that of an increasing anxious, overcrowded and weaponized society.

I did a lot of research on Yamasaki, the airport, Saint Louis and also worked with the Saint Louis Art Museum collections. The artwork all grew out of that material. The figures entered perhaps because there is a very specific story to tell. I found images of the architects working late into the night, of women on holiday in advertising campaigns about destinations reachable from Saint Louis, and the telephone booths that have now been removed because we all have mobile phones. I didn't want to directly reference the towers and all that they now embody. It was a way to sit on the edge of a changing world that is both in love with its systems and one that is deeply threatened by them. 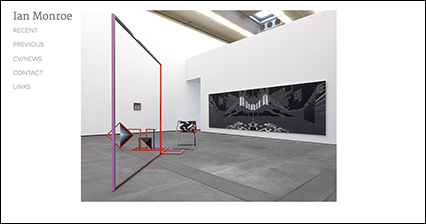