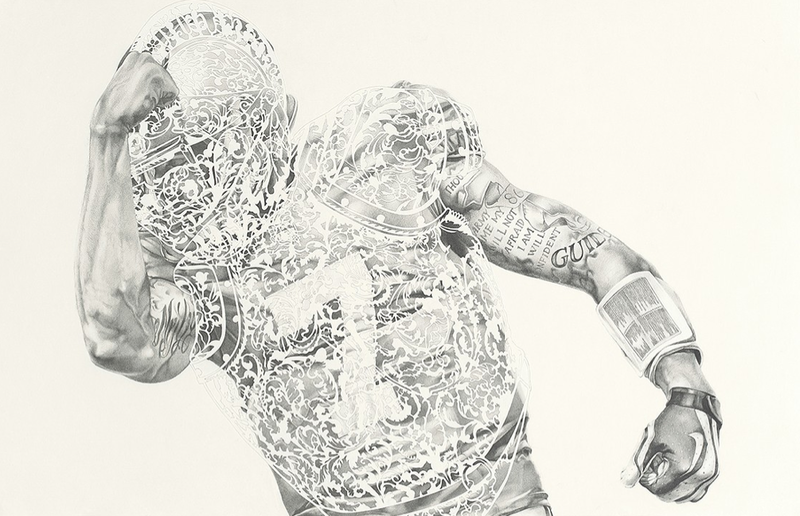 According to GEOFFRY SMALLEY, "to understand the history of American team sports is to understand our national development." To this end, he thoughtfully and humorously examines the "Big Three" (baseball, football and basketball) in painting, drawing, collage and sculpture. Painting on top of existing reproductions, he injects sports arenas into famous Hudson River School landscapes and mashes up team uniforms and mascots with the animals that inspired them. Geoffry earned his BFA from the University of Illinois, Chicago and his MFA from The School of the Art Institute of Chicago. He has exhibited extensively in and around Chicago. Most recent was his solo exhibition Past Time at Packer Schopf Gallery in the summer of 2014. When he isn't making art, Geoffry works as an art conservator at Joel Oppenheimer, Inc. in Chicago, where he lives.

OtherPeoples Pixels: Tell us about the work in Past Time, your most recent solo show at Packer-Schopf Gallery in Chicago.

Geoffry Smalley: For several years I've been exploring social and political issues related to American sports, and Past Time is the latest body of work. In my daily dealings as an art conservator, I think about the works I treat, their place in American art history and the nature of authenticity. I have to hide my hand when treating an art work, and because of that I began to think of ways I could use historical images for my own purposes. At the time, I was also reading about the rise of sports during the Industrial Revolution, which reflected America's progression into the modern age. 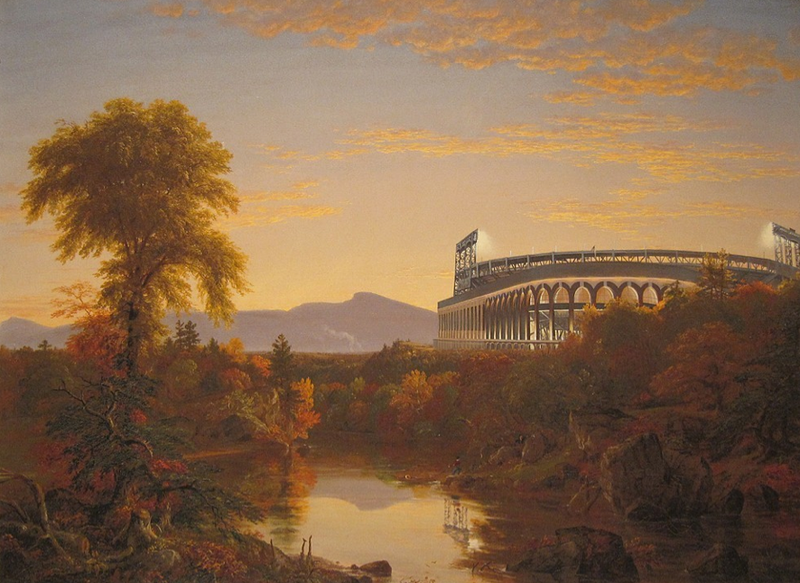 OPP: I'm especially interested in the sports vistas, in which you insert contemporary arenas and stadiums into romantic landscape paintings.

GS: The vistas are reproductions of Hudson River School paintings onto which I have painted images of various sports arenas. Painters like Thomas Cole and Asher Durand held cautiously optimistic views of society's progress. They believed in the sublime, the closer-to-God power of untamed nature. They captured these unspoiled vistas at the very moment our country steamrolled west and grew into the industrial superpower it is now. Sports flourished in the same way. At a time when workers first began to have leisure time, baseball emerged from rural America. It was played at what was then considered a rapid pace, under the sun, during the growing season, affected by the elements. Football is industrial manufacturing plus military readiness: taking land by force, specialized individual moving parts choreographed to achieve a singular, larger goal. Basketball picked up football’s individualized machinations but added a more free-form individualism to the mix. As Americans left the rural landscape to congregate in cities, immigrants, settlers and native-born people tried to assimilate their variegated histories into an homogenous American identity. Sport offered a common site and a common language where that diversity could be bridged.

OPP: Team names and mascots are a jumping off point in many of your drawings on found images, as in Chief and Cowboy from 2014, as well as Seahawks, Orioles and Eagles from 2011. It seems like most professional sports team names are either history or animal references. Is this the case? Why do you think that is? Can you think of any exceptions?

GS: I believe team names are derived from the tradition of using animal totems as a way to harness the mythic powers, internalize the traits and externalize the characteristics of certain creatures. In football you have the Eagles, Lions, Panthers, Bears—all predatory, strong animals. Baseball gives you Cubs, Orioles, Cardinals and Blue Jays—not really striking fear into an opponent with those names. But there are also historical and social references—49ers, Cowboys, Brewers and Steelers—which reflect each team’s hometown industry/identity and blue collar fans. Of course you have the tradition of “honoring” Native Americans by making them mascots. From Chief Wahoo to Chief Noc-A-Homa to the tomahawk chop, there are racist slurs appropriated with great popularity across all sports. The traditional Thanksgiving NFL matchup of the Cowboys vs. Redskins is also indicative of historically entrenched nationalism and racism that still bubbles beneath the surface. Team names are meant to carry with them meaning and identity, and do so quite powerfully, sometimes with unintended consequences. There just a couple exceptions to the animal/historical references, where a team name actually invokes either more etherial or benign powers. The Heat, the Thunder, The Sox from Chicago and Boston. . . hard to take umbrage with the fact that Miami is hot or that Chicagoans wear socks. 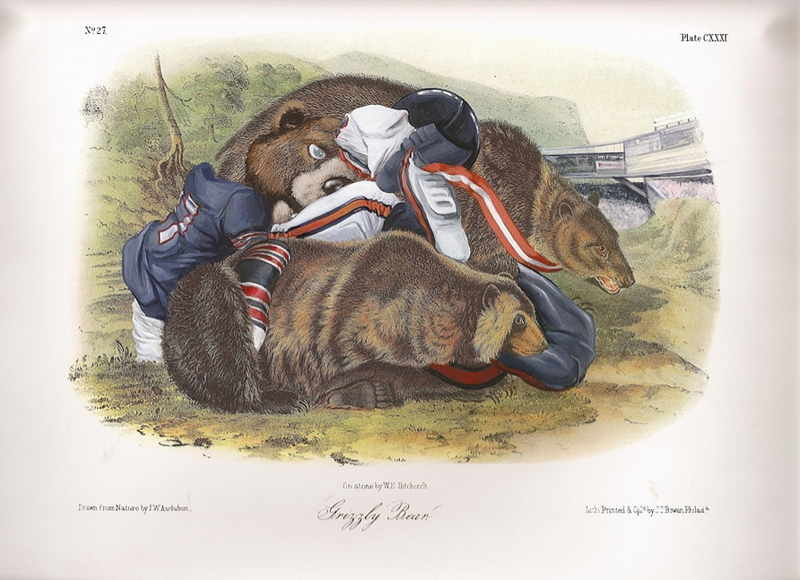 OPP: Could you talk generally about the strategy of the cut-out in your work? You've used it in collage, drawing and sculpture, and it appears to be both a aesthetic and conceptual strategy.

GS: I have used the cut-out for about 15 years, originally as a way to isolate all or part of a specific image from the collage-like paintings I used to make. It began as an attempt to understand why I used a particular image, how re-contextualizing an image changed or added to its meaning. That isolation evolved to be more of a strategy of simultaneously concealing and revealing, taking images past straight representation and into a more mysterious place. The cut-out also acts as an interruption, a pause or glitch in the image a viewer is trying to decipher. Not being given the whole story at once allows for a slower absorption of information and keeps the question alive longer. It's always more interesting when you don't know the answer. On a base level, cutting and collaging is an extension of my drawing practice, a way to regroup and quickly realize thoughts. 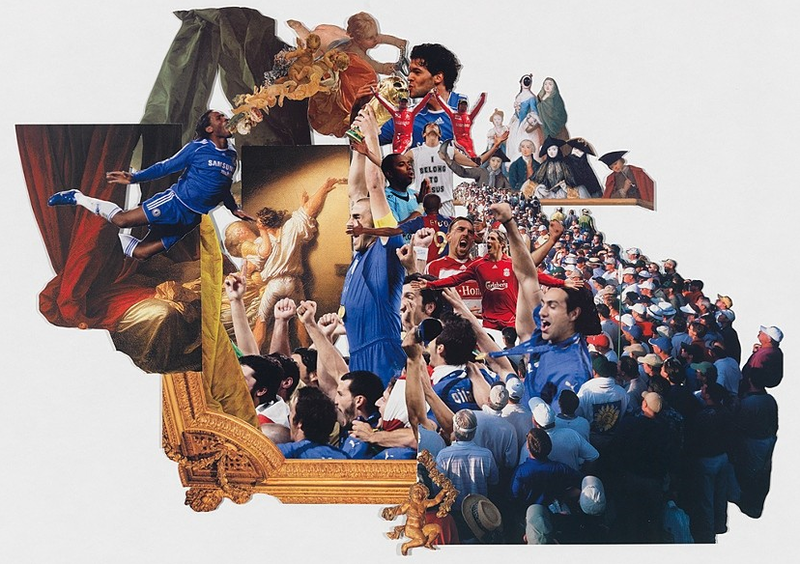 OPP: I'm seeing a lot of forms that evoke the Fleur-de-lis and other coat-of-arms designs. Some examples include the graphite helmet designs in Starbury (2011), the decorative flourishes in Antique Sorrow (2008) and the cut-out gold foil in Dale Earnhardt Portrait Cartouche (2007). What do these flourishes mean to you? How has your use of them changed over time?

GS: Those forms mostly come from the Rococo. I was picking on NASCAR, talking about the spectacular, florid, over-the-top displays of eye candy that NASCAR embodies. The Rococo is often discounted as a movement entrenched in frivolity and poor taste, one of shallow and selfishly playful intent. Just beauty. I used the forms to create what I called “portrait cartouches” of NASCAR drivers, comprised of all the sponsors’ logos on their fire suits. As with the cut-out, decorative forms serve dual purposes. As aesthetic forms, they bring shape and content to an image. In Starbury and similar images from Past Time, I conflated athletic and military display, imagining athletes “in the trenches” or as modern-day gladiators and warriors. I began to think about contemporary athletes’ tattoos as parade armor worn by Medieval and Renaissance kings. That armor was never worn in battle. It was a narrative display of power. 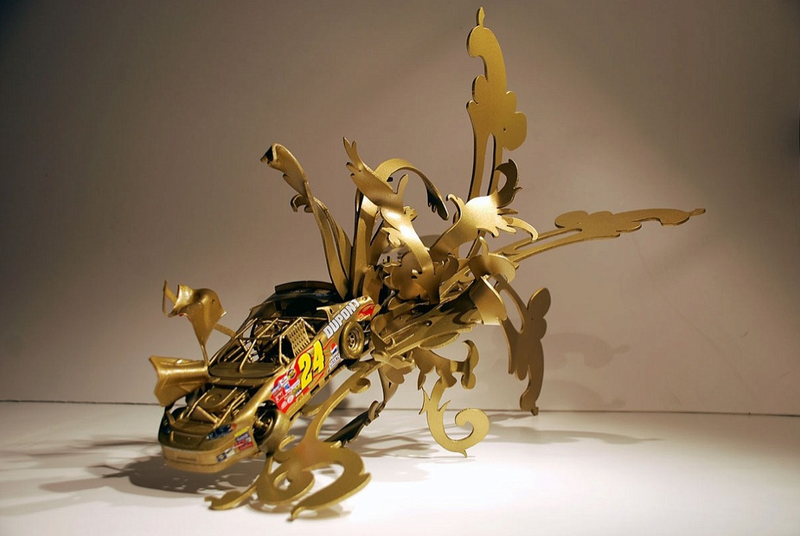 OPP: How do you decompress after a solo show or the completion of a big project? Do you need a break before returning to the studio?

GS: I definitely need to take a break. I usually spend a little time away from the studio after a show, until my feet get too itchy to keep me away. I see an exhibition as an opportunity to get some perspective on where I am with my work in general. It’s good to see all the pieces out of the studio, having a dialogue together. I take that back to the studio with me. After cleaning and rearranging, I research, make drawings and listen to a lot of baseball on the radio to prepare for the next thing.

OPP: And what's your next thing?

GS: While making work for Past Time, I had thoughts and ideas bouncing around that didn't fit with that show, so they got put on the back burner. But as I stated above, feet get itchy. I have been thinking about how the landscape/stadium idea relates to religion. Certain stadia and arenas are considered pilgrimage sites for fans. Naturally, inside those sites are relics, items imbued with the history and iconography of the residents housed within the building. I’m working on ideas for sculptural forms that play with sports reliquaries and trophies. . . nothing fully-formed yet. But I’m excited to get back to work. 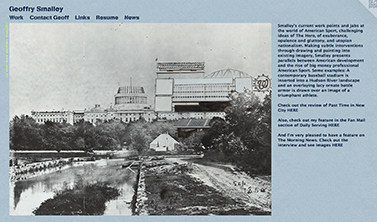 To see more of Geoffry's work, please visit geoffrysmalley.com.
Featured Artist Interviews are conducted by Chicago-based, interdisciplinary artist Stacia Yeapanis. When she’s not writing for OPP, Stacia explores the relationship between repetition, desire and impermanence in cross-stitch embroideries, remix video, collage and impermanent installations. She is an instructor in the Department of Fiber and Material Studies at The School of the Art Institute of Chicago, where received her MFA in 2006, and was a 2012-2013 Mentor-in-Residence at BOLT in Chicago. Recent solo exhibitions include I Still Haven’t Found What I’m Looking For (2013) at Klemm Gallery, Siena Heights University (Adrian, Michigan) and Everything You Need is Already Here (2014) at Heaven Gallery in Chicago. Stacia recently created a site-responsive collage installation in her hometown. NEXT: Emerging Virginia Artists runs until October 12, 2014 at the Peninsula Fine Arts Center in Newport News, VA. Here|Now, a two-person exhibition curated by MK Meador and also featuring the work of Jason Uriah White, is on view at Design Cloud in Chicago from July 25 - October, 24, 2014.